Star Wars/Trek may make space exploration look fun and exciting, but in reality, boldly broaching the final frontier would almost certainly be a difficult, dangerous, terrifying ordeal. A few years back, FTL: Faster Than Light played on the “space is an unforgiving death trap” idea, melding interstellar exploration with hardcore roguelike elements. In 2016, Everspace hit Kickstarter and Early Access, promising to expand the FTL formula with full 3D space combat and exploration. The result was a niche hit, and now Everspace: Stellar Edition, which includes the game’s DLC and other goodies, has arrived on Nintendo Switch.

Of course, making the jump to the Switch is a rather perilous journey in its own right. Has developer Rockfish Games managed to successfully shrink down its space adventure? Was the original game even all that great to begin with? Time to find out if Everspace: Stellar Edition is the latest Switch smash or an entertainment black hole…

Everspace casts players as scientist Adam Roslin, or rather, a series of clones of Adam Roslin. You’re on a mission to reach a mysterious set of space coordinates deep within Cluster 34, a dangerous asteroid-littered demilitarized zone patrolled by various warring factions and violent space bandits. When you die, and you’ll die a lot, you take control of a new Adam Roslin clone with all the accumulated knowledge of the previous copies and set out for the coordinates again. Everspace’s story is simple, but it does serve up a few fun twists. Rockfish could’ve got away with less, as Roguelikes aren’t really known for their stories, so it’s nice that they went above and beyond.

As mentioned, Everspace mostly borrows its basic structure from FTL. You’ll travel through seven sectors, each of which consists of several randomly-generated star systems. Upon arriving in a system, you can usually skip directly to the next one if you want, but you only have fuel for a limited number of space jumps, meaning you’ll have to stop and scavenge fuel and resources at some point. Of course, doing so will expose you to danger – enemy ships, black holes, space storms, and more are waiting to kick your ass. Thankfully, Everspace isn’t quite as stingy about death as FTL. While dying will send you back to sector one without any of your collected resources, you do get to keep your money and blueprints you’ve found. Money can be used to buy improvements for your ship, or unlock additional ones, while blueprints enable you to craft new weapons, shields, consumables, and whatnot on your next journey.

Since you’re playing as a succession of clones that conveniently share a memory, you also get to retain your story and quest progress. Along the way you’ll meet a variety of colorful NPCs who you can help out, or occasionally flirt with, adding a bit of color to your repeated trips across Cluster 34. Overall, Everspace’s basic loop is a satisfying one. Initially, the game’s challenge will hit you like a brick wall (don’t be discouraged if you die half-a-dozen times in your first hour like I did), but as you improve your ship and learn the basics of combat and survival you’ll gradually be able to venture further, and the game does a good job of egging you on with a steady drip-feed of new characters and information.

If you really do find yourself stuck, the game does offer an easy mode, although I suggest you try to stick it out on normal difficulty for a while as it will give you’re a full taste of Everspace’s satisfying combat. Controls are smooth and responsive, allowing for a full six-degrees of motion (up/down, left/right, forward/backward) and switching between weapons and defensive abilities without much trouble. At first it may feel like a bit much, but before long you’ll be pulling off dazzling dogfighting maneuvers.

Unfortunately, searching for resources is less thrilling. Every system you visit is essentially the same – an asteroid field with a few minable rocks, salvageable wrecks, and a variety of allied and enemy ships to help/hinder you. Some of the hazards you’ll face and the precise layout and appearance of the floating rocks change, but the basic experience remains largely the same.

Unlike more mainstream space games like No Man’s Sky or Elite Dangerous, Everspace doesn’t encourage leisurely surveying of each sector. Enemies love to ambush you, and if you stick around any system too long, a big nasty batch of reinforcements will arrive. There are ways to make resource scrounging less treacherous – avoid close-quarters combat with more than two or three enemies, stick close to allied ships, and don’t be ashamed to hightail it to the next system if things get too hot – but these tricks don’t make the game any less repetitive. There’s something innately gratifying about traditional dungeon-mapping roguelikes, and drifting around asteroid fields just doesn’t provide the same level of structure or satisfaction. It doesn’t help that Everspace has a handful of basic UI issues – the small blue dots that mark resources are particularly easy to overlook.

Everspace’s transition to the Nintendo Switch is mostly successful in terms of playability, but some fairly significant visual sacrifices have been made. Everspace is low-key gorgeous on PC, Xbox One, and PlayStation 4, but texture and lighting quality take a major hit on Switch, which is disappointing as the game only runs at 720p, both in handheld mode and while docked. At least the game maintains a nice, stable 30fps. As with many other third-party ports, the main thing the Switch version of Everspace brings to the table is portability – if you’re planning to play the game on your TV there are other, better versions of the game.

The time it takes you to blast through Everspace’s seven sectors will be dependent on your personal approach and skill, but expect it to take at least 10 hours. That’s really just the beginning, as there’s more story to be unlocked by playing through the game multiple times and a witheringly-difficult Hardcore mode to tackle. A nearly-endless journey is in store for those who really fall for Everspace’s roguelike charms.

This review was based on a Nintendo Switch copy of Everspace: Stellar Edition provided by publisher Rockfish Games. You can purchase the game from Nintendo's eShop currently at a 20% pre-order discount ($31.99 instead of $39.99). 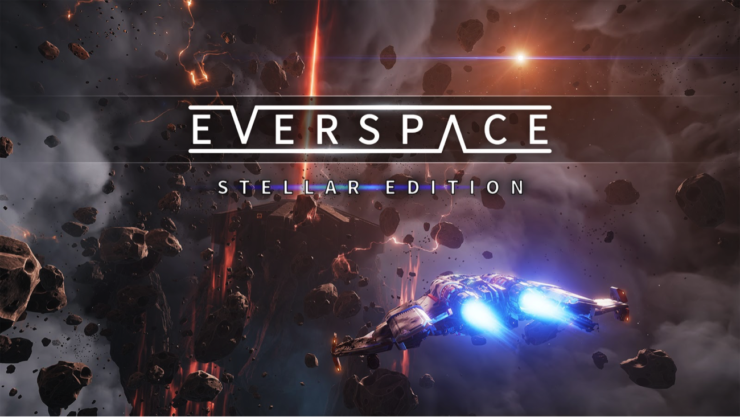 Everspace: Stellar Edition isn’t the best 3D space shooter or roguelike available, but it’s a relatively unique and successful fusion of the two genres. Repetitiveness aside, you may just find yourself hooked by the game’s tight combat controls and satisfying progression loop. Unfortunately, the Switch isn’t the best way to play the game, unless portability is your top concern. Everspace for Switch isn’t for everybody, but if you fall into the game’s relatively narrow niche, a galaxy of die and retry fun awaits.