Elite Dangerous, by Frontier Developments was released on the 16th of December, 2014, and I have been waiting for this day since the 2000's. No, this isn't Call of Duty. This is, however, a game in a class of its own, even among its released peers (Star Citizen hasn't been released yet). But it captures the imagination of the willing so profoundly with the large open Milky Way that it's hard not to at least take a peak at this genre if you are among those that usually don't

Elite Dangerous pulls you into a vast Galaxy and lets you decide how to live.

Space simulators are in no way, shape or form a game type that has a large player base. It's not for everyone. The gameplay mechanics are definitely different from what the typical casual or even hardcore gamer is used to. You're flying a freaking ship through space, and it definitely helps to be a fan of Science Fiction to be able to appreciate these types of games. But wow! It has been worth the wait!

I have to caveat here that I've never played an Elite game itself, but followed the series and have been interested, if not a bit intimidated, since the 2000's. I do have very fond memories of X-Wing, Tie-Fighter and X-Wing Alliance (no X-Wing vs Tie-Fighter for this guy). I remember flying through space and blowing things up as I save the galaxy. I remember installing the newer model packs to update the graphics and making my own missions, flying against the Empire or Republics finest. This is where my love of space simulators began. It hasn't let up since.

To truly enjoy this game, a joystick of some kind is mandatory. Flying in space is a great experience with realistic physics.

What is Elite Dangerous it exactly? It's a free-form space simulator with very realistic Newtonian physics. It's most similar to the very ambitious X series of games (X1-X3 and X Prelude), though perhaps with some minor yet still significant differences. You start the game in your very small and seemingly insignificant ship, a Sidewinder Mk 1, sitting in a hanger of a large space station of the Coriolis type. You look before you to behold three gorgeous panels of information giving you target information, relative spatial information and a general overview of system health and system power allocation. Starting up for the first time and you're faced with a checklist that forces you to become familiar with the button mapping of your particular controller. You have to actuate each button and move in each axis in order to lift off for the first time. After that, you're greeted with opportunity. 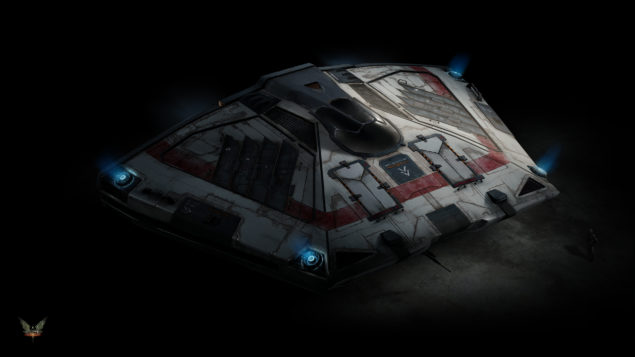 Pure golden opportunity to make your mark on the galaxy. Lifting off with attitude thrusters and pointing the nose towards the opening to the great beyond for the first time is an amazing experience. It's also a bit daunting. I remember playing X3 for the first time and not really knowing what to do. That same feeling exists here, but more because of my unfamiliarity with the genre. It can feel overwhelming when there is no direction from a narrator or some other game mechanic that guides you along the way. But that is the magic of this game, and the genre.

You're greeted with pure golden opportunity as you exit that Coriolis station for the first time. The galaxy is absolutely enormous in its size, but not necessarily its depth. It's controlled by three factions and spans the entire actual Milky Way. Incredible. Awe-inspiring. Sends a shiver up my spine. Like many RPG's, MMORPG's and other open world game types, though, there is a great open world to explore, but not necessarily in the variety of actions one can take and things one can do. There are numerous missions and contracts one can take up at any number of stations, but the general gameplay is essentially the same. Fly here, drop off cargo, scan this, blow up that and repeat. But the way in which you go about those tasks is what makes this game so much fun.

Remember Morrowind, Oblivion and Skyrim? Open worlds that essentially repeated themselves in the depth of story? Yeah, but they were fun and we really enjoyed them didn't we? The graphics, the sound, the music and the general sense of adventure all contributed to making those games so amazing and addictive. I know I played Oblivion for more than 600 hours, and still going! Skyrim? Yeah, I'll get to that eventually. But I digress, even real life is limited in the actual actions we take. In life we go here, pick up this, drop it off, eat this, go to sleep. The immersion could definitely use some work too. All of that said, the missions all seem to have individual and unique back stories. And they're fun. Incredibly fun!

You can make your own fortune. However you want. Want to mine some natural resources and sell it? Go ahead, get a mining laser attached (though it replaces a weapon hard point) and have at it! Go explore the galaxy and find new resources and get to it! Want to trade between systems and even smuggle every now and then? Oh yes, there is that. Want to be a pirate and interdict and destroy ships of all types and collect their cargo? Enjoy! What about bounty hunting? Yeah, that's actually an easy career to get into. Interested in a military side of things? Be my guest! It's all there, all the paths that are familiar to those that play these types of games.

The problem, however, is that your actions, while important in your mind and seemingly important when done, don't affect the galaxy-wide economy or political environment. Your actions have an effect, though it's not as large as it could be. Though that is presumably going to be fixed very soon. This doesn't detract from any of the modes of play. Finding an unidentified energy source and coming into real space again to find that it's a wedding barge being escorted by two fighters is great fun. And even better when you blow them all up and take the cargo. Speaking of cargo, even collecting cargo is an exercise in patience.

One thing I didn't expect, though, is the realistically implemented limit on fuel and the distance one can travel. It was annoying at first. I'd plot a course to a certain system far away so I can buy some goods that aren't available in other systems, and I'd expect to find space stations and other ways to refuel along the way, or even just be able to make the trip in one fell swoop. Nope! Boy was I surprised when I could only make it a few systems (one must plot a course to each successive system along the plotted route) and then run out of fuel. Even though I was clearly frustrated and kind of pissed off, it's a realistic element.

One would expect that faster than light travel would have quite the high requirement for fuel, whatever its form. Regardless, it's a humbling experience that helped to shape my gameplay. What do I do for a living in the game, you may ask? I actually go around systems, look for unidentified signal sources, come back into normal space, scan for wanted individuals and collect their bounty! It's working well so far!

Those that play flight simulators, and space simulators, seem to enjoy being immersed into an experience a little more than other gamers. We want to feel like we're there in the action, actually controlling your craft. This game doesn't disappoint. The controls themselves are typical for the genre, and will be familiar for anyone who has flown a space simulation before.

The physics model used is very effective and without the flight assist on, it's definitely one of the trickiest things to do. There isn't, however, much of a learning curve. Once you learn what all the buttons are mapped to, it's a simple affair to go around the galaxy exploring, communicating and dealing destruction to others. Dogfighting is another great aspect of this game.

It's fun, it's challenging without being overly hard for the beginner (so long as you don't pick on pilots rated more dangerous than you), and can be very rewarding and even a bit tiring at the end of it. You better be ready for it!

It might be just me, but just the simple act of using the frame shift drive is terrifyingly cool. Hit the button (T3 for you guys using the Saitek X52), wait for it to charge, then throttle up all the while yelling "Punch it Chewie!" as your craft so elegantly enters a faster than light state. It's mesmerizing, and the dynamic sound makes it even better.

That sound when exiting near the star of the target system is breathtaking. The sound effects have been extremely well done, and everything is eerily realistic sounding and simply well done. It's the little things that count, and even using your attitude thrusters makes a small sound within the cockpit that brings back space movies. It's a memorable experience. The music is scored by Erasmus Talbot, a British born composer that lives in Sweden.

Each song is randomly played, it seems, but appropriately so. It never overwhelms in the way that cinematic games do, but adds to the perception of deep space exploration in the way that Hans Zimmer's work adds to the movies he's composed. The sound design adds an element of epic to this game that is rarely seen in video games. It's more than the sum of its parts, and the sound is a majority of that. A proper sound system or real headphones should be required. No computer gamer headsets, you need real headphones and proper audio equipment that can recreate the subtle nuances of the soundscape.

Speaking of breathtaking, these graphics. These graphics! While Elite Dangerous may not necessarily seem "complete" in the content department, but the level of polish on the graphics and the rest of the game is great. It's complete and I can't get over how good it looks. It's impossible to not enjoy the graphics. Yeah, there's a lot of blackness out there with a starscape that doesn't really look or seem real. But then again, have you been to space? Stars are uniquely and realistically rendered with flares and all. Your craft, the space stations and other planets are all modeled to perfection. Every little interface detail and subtlety is there. There is nothing really missing in this department, and it won't disappoint even the most critical of gamer.

Elite Dangerous may have its flaws and may not be perfect in absolutely every way, but it exceeded my own expectations in its presentation. More importantly though? It's fun. It's exciting, and I come back for more quite often. That's the mark of a good game, isn't it? Can you play it, enjoy it and actually want to play more? Elite Dangerous accomplishes that, in spades.