Humanity's last hope doesn't lie on Earth but in the skies far beyond the atmosphere. Living aboard a floating spaceship are Syndey and Stanley, the pair of protagonists in EarthNight that hope to one day return to the planet. However, in order to do so, they'll have to pass through swarms of flying dragons on this one-way journey. It's here that the story opens up and players are sent on the right adventure in EarthNight, always moving and never stopping. 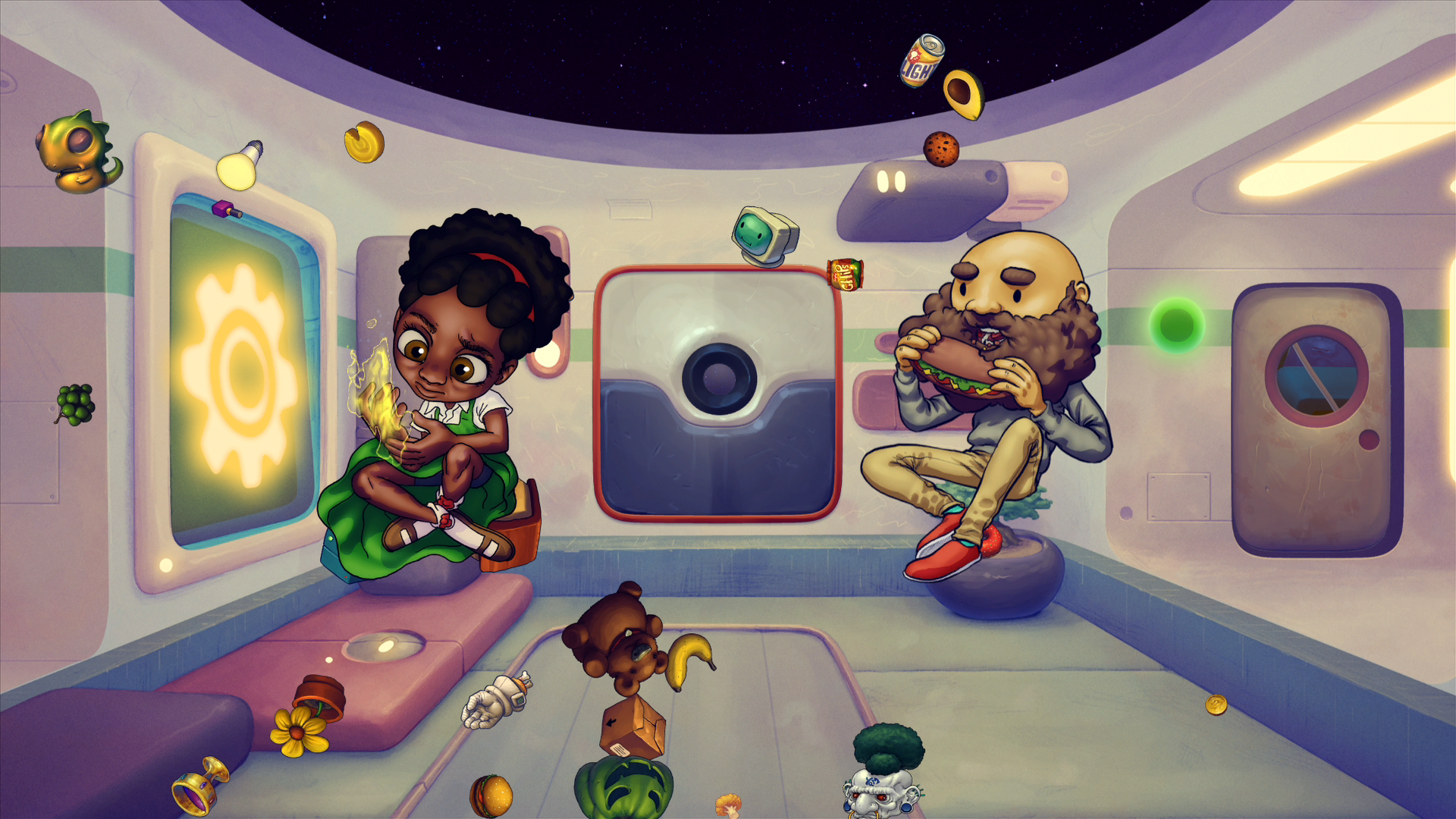 Every game of EarthNight starts with Sydney or the bald-yet-bold Stanley hitting the ground (sorry, back of a purple dragon) running off towards the dragon's head in hopes of slaying this mighty beast. While their two feet are always moving forward, the player has quite a bit of control in movement and pathing. Sydney and Stanley each have their own distinctive playstyles, both in their mobility options and also in the upgrades they can earn (Stanley picks up swords to attack with while Syndey collects loaves of bread that empower her spiritual side).

For example, Sydney has an innate ability to double jump, however her primary attack, gained once she eats a loaf of space bread, is a modified dash that can barrel through enemies. Stanley, on the other hand, has to acquire various types of boot power-ups in order to unlock that second jump. Those swords he picks up can be used to attack foes of different elements and unlike Sydney's magical bread, Stanley will automatically attack when he runs into an enemy. Both characters can also attack by bouncing atop enemies just as Mario can but plenty of enemies in the latter half of EarthNight are too well-defended to bounce on without a pair of protective boots on. 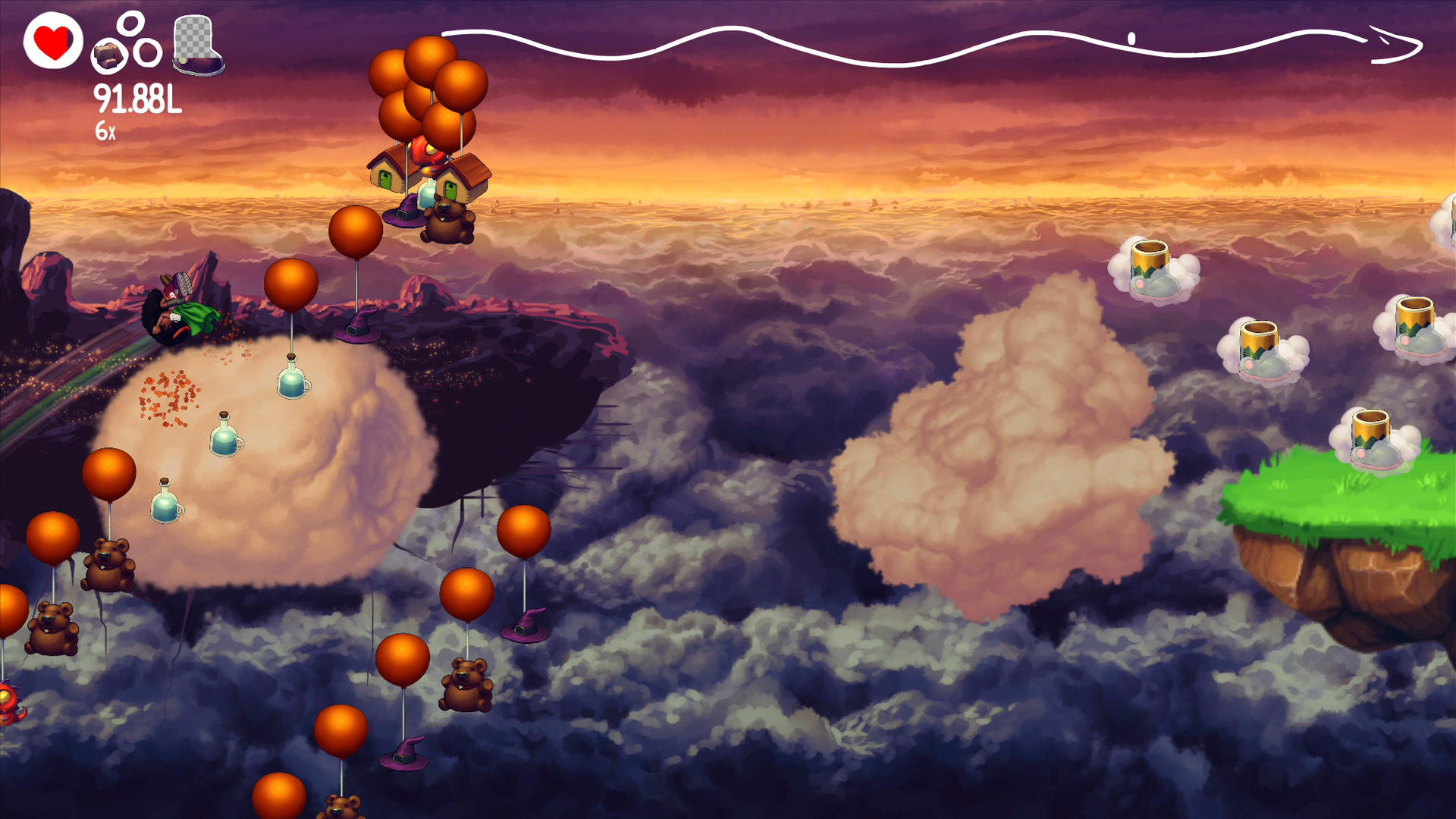 EarthNight's progression system stems from the unlocking and upgrading of new power-ups that can be picked up in each stage. Any loot acquired or dragon blood shed can be converted into water, the primary source of currency aboard the spaceship that serves as the hub for Sydney and Stanley. Water isn't enough to acquire new upgrades, though. The various tools that serve as temporary upgrades also require a great number of dragon parts. Dragon teeth are fairly straightforward to acquire: simply run your way to the head of a dragon and deal enough damage to slay it and acquire a single tooth. Dragon eggs, on the other hand, can be a bit more tricky. There are always three of these in a given stage, but because Stanley doesn't have the forte to stop or turn around, you're going to have to hope you can run across one during your playthrough of the procedurally generated level. 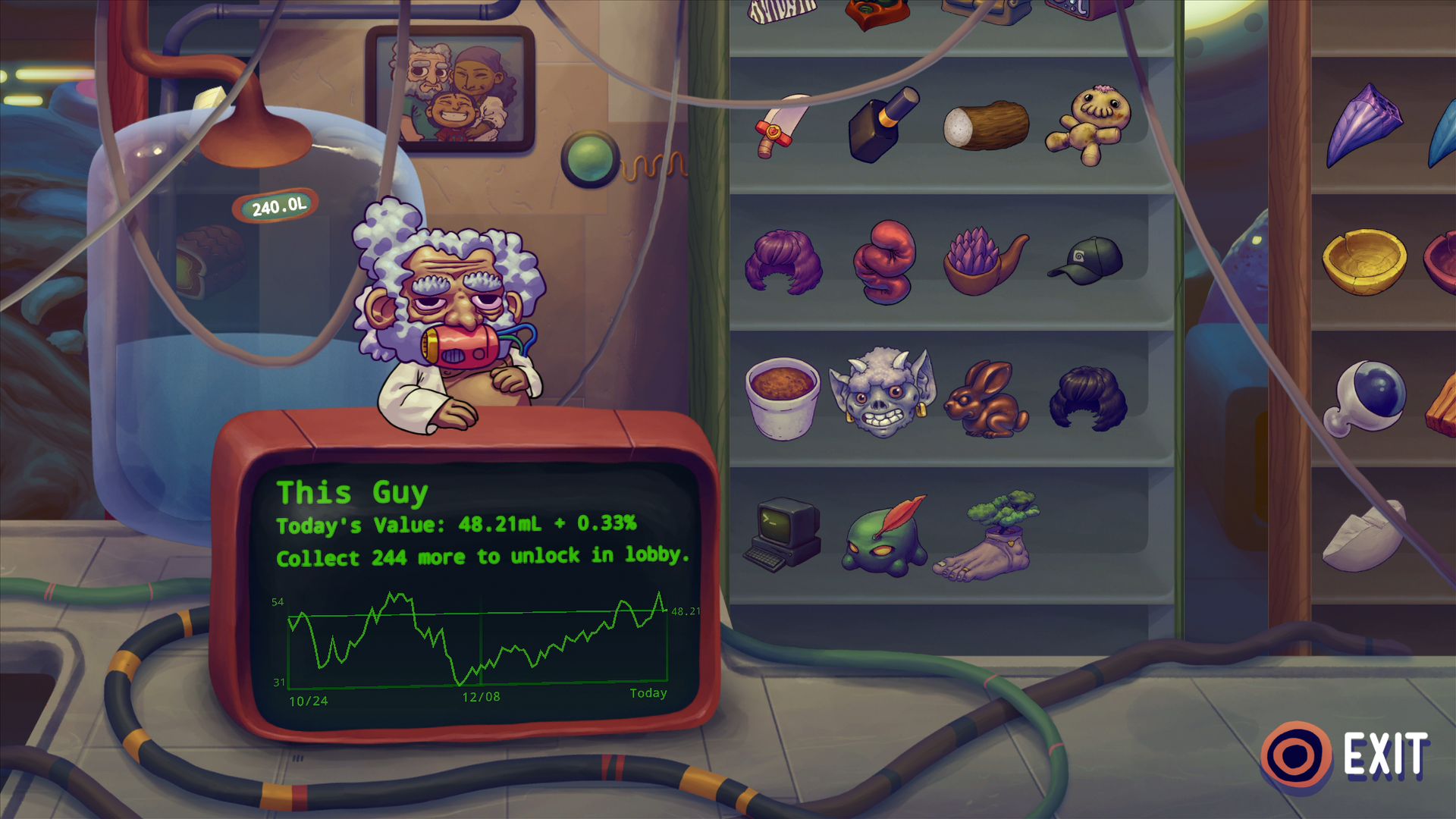 Each level of EarthNight features a fairly straightforward formula: land on one end of the giant wyrm and run your way to its head. What you encounter along the way is always going to be a little bit different, given the game's influence in procedural generation and random aspects. Dragons aren't known to have completely straight spines; each level path is filled with natural mounds and dips and even the occasional loop to run around but because this is one continuous beast you're running across, there's never a risk of falling off into space. For some strange reason, these dragons have a tendency to accumulate a great number of floating platforms on their backs and these stages have a great deal of verticality that can only be reached with a well-timed double jump. It's here that you'll often run across at least one dragon egg.

After slaying a dragon, Sydney and Stanley engage in a freefall down towards the inevitable EarthNight. During this time, you can freely move about during your descent and pick your next target to land upon. Each of the five layers of the atmosphere is host to a select range of dragons and you can choose which one to slay. What I liked for a speedrunning aspect is that if you can navigate through the weaving mass of dragons during your re-entry back to Earth, you can effectively skip entire layers of levels (save for a certain gargantuan dragon that always blocks your way midway down). 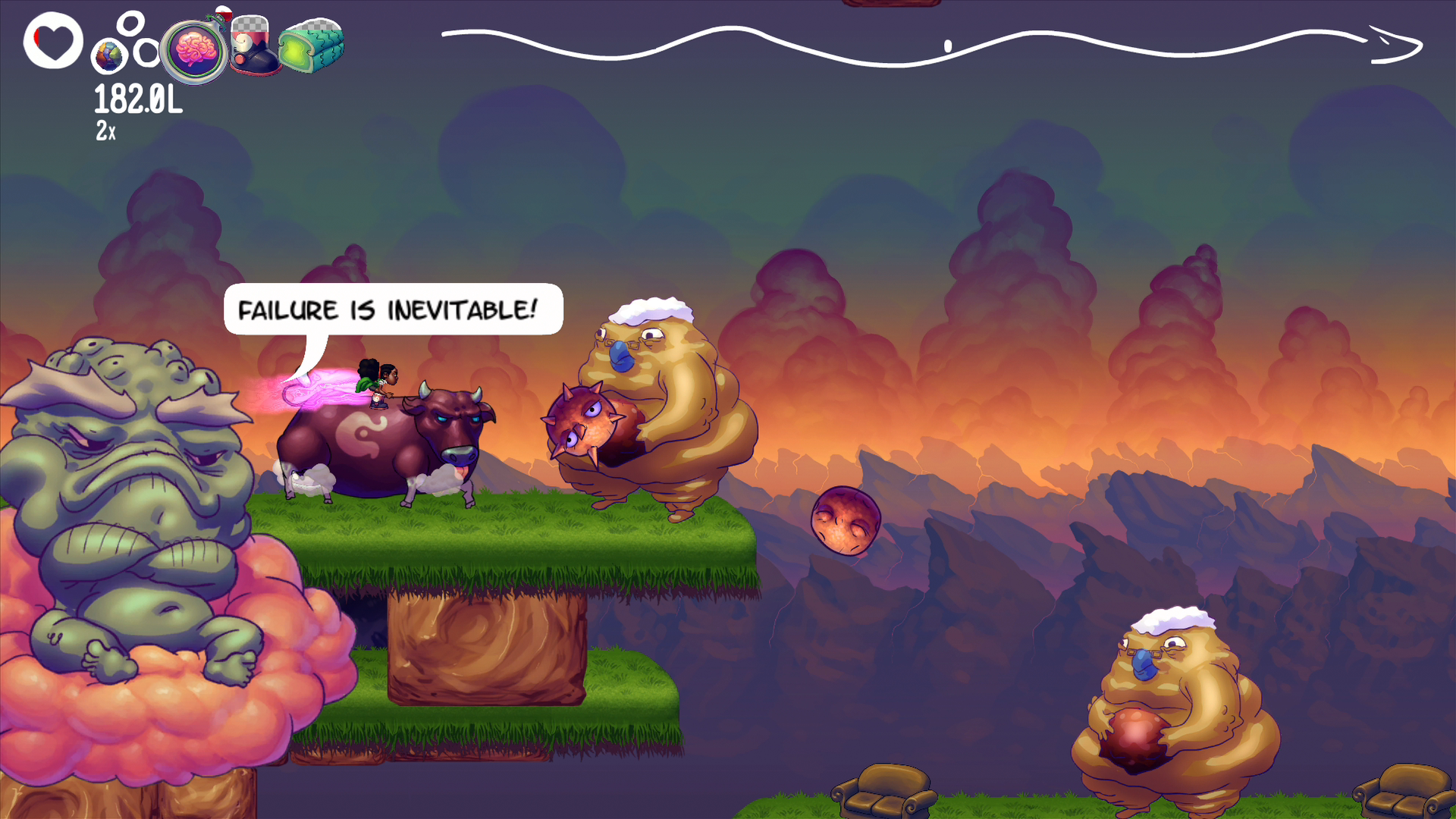 The randomness of EarthNight is what makes it unique compared to other auto-runners but also serves as what could be its downfall. This is especially noticeable as Stanley, where you're left at the mercy of a power-up to show up and grant him boots for a double jump. Without them, his momentum is painfully slow, even with a forward jump that propels him farther than a standard jump. Regardless of what power-ups you're currently working with, EarthNight throws in more and more obstacles than most players can hope to mitigate. The final layers of each run are accompanied by giant floating monsters that do little more than taunt you and fling themselves at you in order to humiliate and defeat you when you're so close to the ending. Trying to mitigate damage from these oversized foes while also dodging the various waves of regular enemies and projectiles is an exercise in finesse that I simply couldn't manage. Even playing on EarthNight's Assisted difficulty (which grants the player additional hitpoints) wasn't enough to break past the giant wolf head that's proven to be the unfortunate ending of at least a dozen runs of mine. 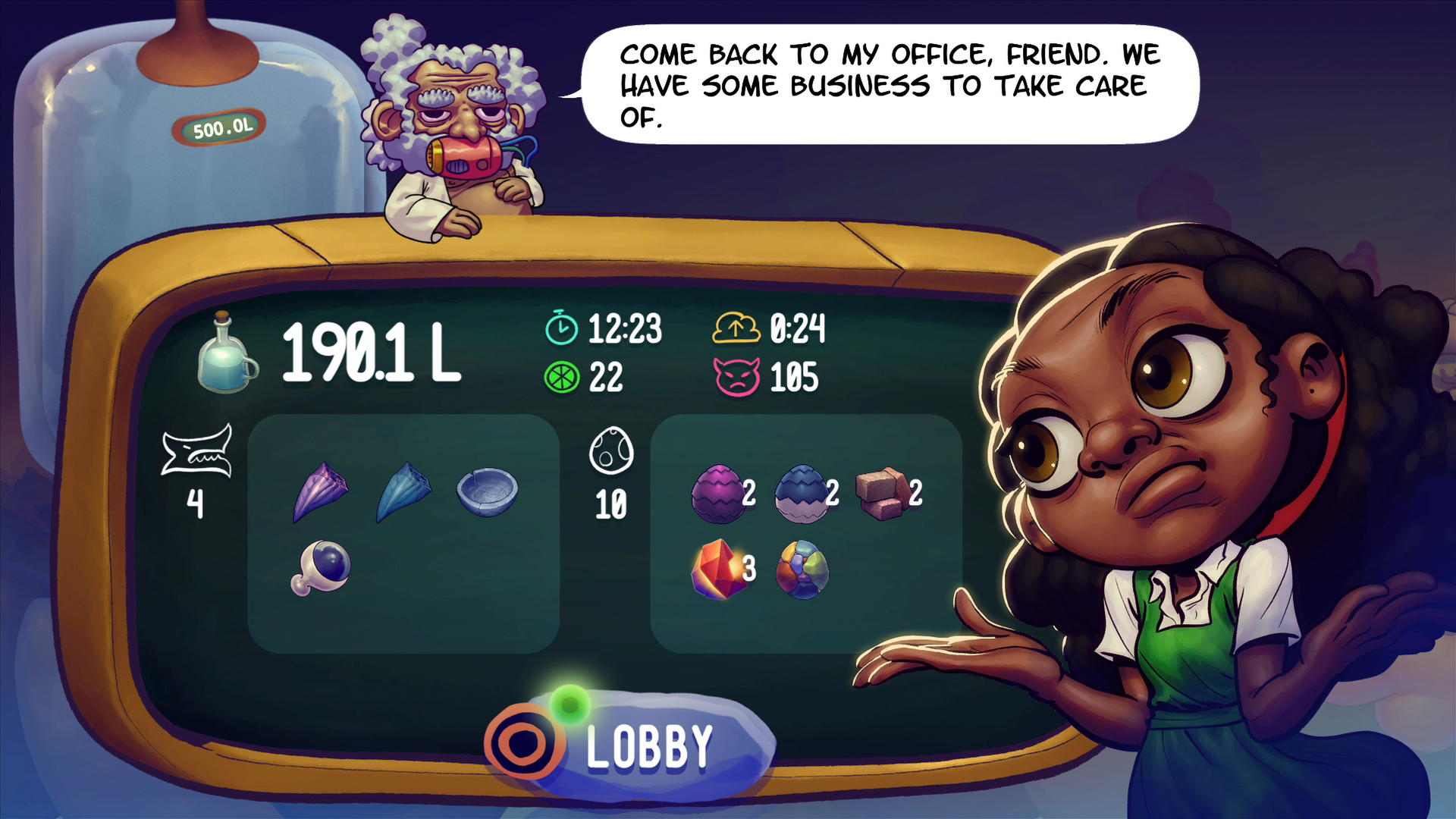 What I found to be the most enjoyable of run after run of EarthNight is in how it presents itself. Chiptune music will always be my jam and the soundtrack to EarthNight is quite catchy (it's even available on Bandcamp if you'd like to check it out). The animation is another aspect that cannot be understated. All of the hand-drawn animations flow together beautifully as players descend back to Earth and there's a great use of color that helps each level feel different from the others. From what I was told, there are tens of thousands of frames of animation that were all hand-drawn, so I have to give credit to the amount of effort taken to bring EarthNight to life.

Style alone isn't enough to make EarthNight into a great game, although it's far from the worst auto-runners out there. I found myself to be routinely frustrated in the randomness of the second half of my runs, either having the useful upgrades just barely out of reach as Stanley or getting overwhelmed by enemies as Sydney. As an auto-runner, the procedural content works well with the persistent progression gained by slowly accumulating new upgrades run after run, but I still found myself hoping that there was more to this one-way trip.

EarthNight has some novel ideas when it comes to making an auto-runner worth coming back to time and time again, but the inconsistent difficulty spikes and RNG elements can quickly put an otherwise good run into freefall.