Driveclub VR is a complete package, both in visuals and audio, that’s perfect suited for the launch of Sony’s PlayStation VR headset. Building on the groundwork of the 2014 release from Evolution Studios, this VR experience is not merely a supplement to the existing game or some half-cooked expansion but rather a fully featured racing game built exclusively for virtual reality.

If you had any hesitations or concerns that Driveclub VR might be lacking in content, you can easily put those thoughts to rest. With a roster of 80 detailed cars, each and every machine both looked and sounded like I was seated behind a machine that I could only afford in my wildest dreams. The progression systems from the original Driveclub are present in the VR sequel as well, keeping players hooked on taking another lap with new cars and club customizations unlocked at a frequent pace.

Driveclub VR’s attention to detail is a prime example of how the increased power provided by Playstation 4 Pro could be used. The finer details such as dashboard readouts are nearly impossible to read on the current hardware. With cars with an analog speedometer, I found myself physically having to lean forward in my chair to get a good read on my current pace in the middle of an event. Thankfully many of the cars featured in Driveclub VR feature a digital readout of speed, making it a bit more comfortable on the eyes to gauge one’s current speed. Glancing down at the cockpit or aside at a digital screen that offers lap times and route map felt completely natural when zipping through the windy roads of Kyoto or the circuits in Fraser Valley.

Much of the environment that races by is also guilty of this lower resolution on the VR headset. When in motion, the scenery speeds by so quickly that any additional details are lost, but as soon as the action comes to a halt, the rough edges pop up directly in the player’s face. Before each race, Driveclub VR gives players the opportunity to virtually examine their car from every angle. It’s a fun novelty but I found myself tired of examining the internals especially when the jagged edges stood out so visibly.

The online offerings of Driveclub VR are just as solid as those found in the original title. Joining or creating a club, completing club challenges, and going head-to-head with other clubs are all part of the basic fare offered in this VR sequel. Hopping into an online match is as simple as creating a private lobby or joining up with a public event set up on a bounty board. These public matches pop up every few minutes and I only found a single instance where I joined a public lobby and only found one other soul to race against. Typically I’d jump into groups that were nearly full and if I felt like I could hold my own, stick with them for multiple events. 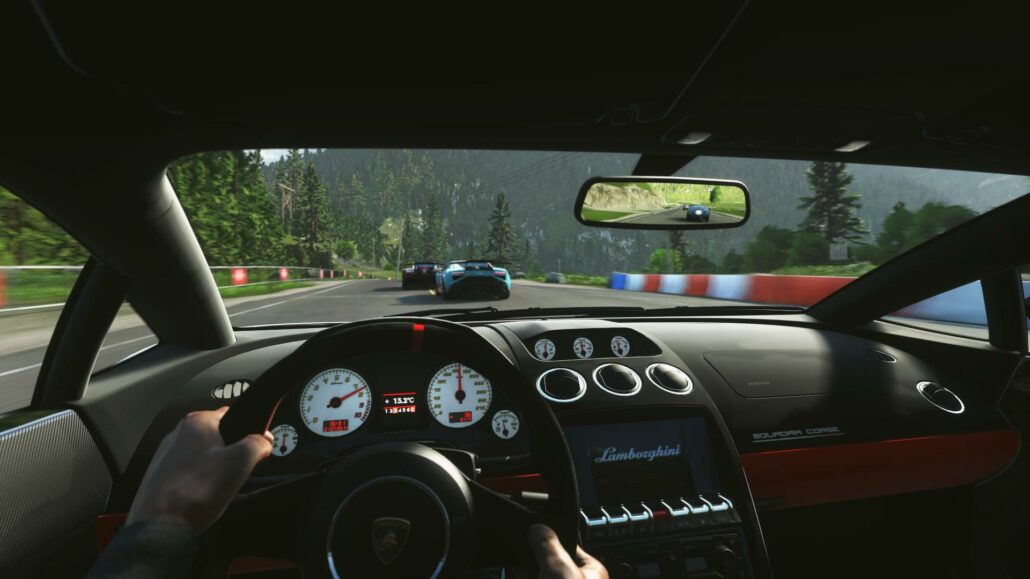 Motion sickness is a very real concern in virtual reality and Driveclub VR’s speed of racing might not sit well with every player. For myself, I discovered that having to remain seated and looking straight ahead was the only way to ensure that some of the motion wouldn’t incur a headache midway through a race. When taking a high-speed curve, whether drifting or not, shifting my gaze off to the edges of my view often triggered some discomfort that wasn’t present in most other VR experiences.

For those that are more prone to motion sickness or are still getting their feet wet with the technology, sampling a demo of Driveclub VR might be the best approach before diving right in at the $40 mark and learning afterward that it’s just not suited for them. A fellow online racer was kind enough to mention adjusting the Playstation VR’s IPD (Interpupillary Distance) to reduce some of the discomfort and I feel it’s worth mentioning to those that might have some issue with trying out the demo. These settings can be found via PS4 Settings > Devices > PlayStation VR > Measure Eye To Eye Distance.

One of the coolest features to Driveclub VR is the Replay system that was added to the 1.12 patch of the previous Driveclub. After saving a race you might be particularly proud of, you can hop into the virtual passenger’s seat and watch your virtual avatar take the wheel and revisit those tight corners. It’s a feature that’s an absolute blast in virtual reality and had me practically screaming out in surprise at some of the more harrowing hairpin turns. The option to customize the driver avatar has also returned, though I did fancy sticking with the default driver that looks just like Miguel from Tekken 6.

Driveclub VR is a shining example of how the infancy of PlayStation VR can only evolve in the future. With all of the current trappings of the original Driveclub and a bit of new functionality, Driveclub VR can stand as one of the more definitive PSVR experiences. However, with all of the attention to detail and minutiae, much of that crisp fidelity is lost in the translation. A resolution boost could certainly make Driveclub VR a bit more appealing on the eyes, but if the PlayStation 4 Pro can’t deliver that on November 10th, players may have to make do with what’s currently available.

Despite some rough edges that mar the experience, Driveclub VR is a great racing title that justifies getting back into the seat of a Koenigsegg Agera R as long as you don't mind being motion sick every now and then.