Over time I've played a wide variety of strategy games, especially looking out for those with a bit of a twist. Even if the games weren't that great, that something to differentiate it from the rest is something intriguing. Driftland: The Magic Revival has a few elements that make two particular games spring to mind. These are the outstanding Populous: The Beginning and the decent enough Majesty series of games.

Driftland: The Magic Revival is a strategy game that features god-game mechanics as well as the hands-off indirect control featured in the aforementioned Majesty series of games, also an interesting twist on the city-buildings aspects found in other strategy titles, with the drifting lands from the title being core to everything found within the game.

The story of Driftland: The Magic Revival is that the planet has been shattered during a devastating near planet-ending war between powerful mages. The continents were shattered and are now small, floating islands in the sky. Also, despite the world being shattered, it still has an atmosphere - this is fantasy though, so that's fair enough. It's the use of these floating islands and magic that are so instrumental in everything within the game. That and also a lot of flying creatures, because the problem with being on floating islands is you can't always walk everywhere.

That's unless you build a bridge between your island and another one, the only way for you to start settling elsewhere. You're going to need to since land is fairly limited, to say the least. It can also be spread quite far apart, which is where your magical abilities come in useful. One of your spells allows you to magically move any island you can see to another location, provided there's enough space for it to fit. Get it close to your current nation of islands, build a bridge and voila, you have some new territory.

It's essential because even the larger islands are limited in space and resources. Worst of all is when the resources, such as stone in the form of a big mountain that takes up a huge chunk of your building space. Even if you've got a fair amount of space, there are caps on how much of certain buildings you can place on an island. For example, cottages which boost your population capacity may have a maximum of one, two or three on an island. Other limits are based on physical resources, such as rock formations or forests, as well as hidden ones that can be discovered at a later point.

There are a plethora of hidden resources. You can discover these by tasking an explorer to survey an island, potentially uncover gold, mana, rubies or coal. There's also a magical spell for the dwarves allowing for a quick survey of an island too. Each of these resources has a specific building for harvesting, which naturally has to be manned by workers. You'll also need to find space to build farms, or their equivalent, to feed these workers and the rest of your population. Fortunately, every building can be upgraded, getting more out of them at no extra operating cost, only the up-front payment to upgrade them. This is essential because the further you extend your empire, the higher the upkeep costs. At least you get some income from the population.

As you could probably expect, since Driftland: The Magic Revival is a strategy game set following an apocalyptic war, there's going to be a bit of conflict. Not only do you have other empires to contend with, but also 'barbarians' - usually a handful of units gathered around a treasure chest - as well as the wildlife that inhabits the world. This wildlife, from giant ravens to eagles and even dragons, will eventually be fighting for you. Once you defeat the creature around the nest, you can capture it, allowing you to recruit the animals yourself which then act as flying mounts for your recruited heroes. Unless you're the Dwarves, who just prefer to build their own flying machines.

It's with these heroes that the link to Majesty is seen. You don't actually give direct orders to your roster of heroes, what you do is set a task what you want to be done and assign some gold to it. The more gold, the more appealing it is to whichever hero happens to fancy doing a bit of work that day. It's always a nice idea, reminiscent of collecting quests in an RPG, or at least that's how it works in Majesty. Here, not so much, the gold simply disappears into the ether rather than going back into what is your cities ecosystem from heroes buying new skills and weapons.

It's a shame because for each of the heroes you recruit, which are either a Knight, a Marksman, a Wizard or an Explorer, are also ones that you'll end up funding to improve. Each recruitment building has an equivalent research building, such as the Library for wizards, which lets you pay to unlock and then purchase different skills for these heroes to pick up and use. Still, the hands-off control isn't too bad and resources aren't too difficult to come by once you're settled in, especially when you surround yourself with a raft of towers to defend your empire, giving you time to secure yourself and build up an army.

Attacking is somewhat more challenging. You can target an enemy building or island, you can even build a camp on their island to further launch an attack. Other options are even using magic, such as creating a portal for your heroes that don't have an option to fly in, or if you're close enough just build a bridge. I've just found that attacking, for the most part, is a chore if only because the units don't seem to want to go in force and they're pretty weak. It doesn't really help that there isn't a great deal of variety, or I'm just a pretty ineffective guiding post.

Whatever you do, you're going to want to keep expanding, building and taking out enemies because of the experience it gains your heroes as well as awarding you progress points, which are then used to unlock bonuses on the "Path of Progress". Only, even this is pretty limited, having three simple lines to go down, either offering bonuses to your buildings and economy, units or magic. It can actually feel a little lacking, especially because the chains are shared.

For that matter, as much as I like the look of the game, and it is a very attractive game. It's particularly eye-catching due to the good models, decent animations and vibrant colours, especially when the action starts, units are fighting and you're firing off lava plumes, tornadoes or just simply exploding an island. Still, the problem is that too much is shared. The factions have different buildings, units and such, but when it comes to the magic, they do look conspicuously alike. The Ancestral Vortex spell for the Elves is essentially a purple version of the human tornado, with spells like island creation, destruction, increase speed and so forth literally being shared between all factions. There's little to actually make one stand out from another with the story, for what it is, being forgettable at best.

The same can really be said for the campaign, of which there are three small ones consisting of a handful of missions each. One for the Humans, one for the Dark Elves and one for the Dwarves. The fourth, the Wild Elves, is currently in development. Still, the real meat of the game is in Skirmish or online, letting you play on a downright huge map against a host of enemies. It can genuinely be challenging then, offering by far the most valuable experience. I really would have liked to see something more compelling story-wise, something to absorb me into the world.

Despite its flaws due to the limited variety between factions and the fairly anaemic campaign, the core gameplay is certainly compelling and worth trying out. It's more than engaging enough just to drop in skirmish matches, letting the game truly showcase what it's capable of. It's capable of a decent amount and there's always the chance that the fourth campaign, set to launch today, will actually give some depth the campaign sorely needs. The question is always simple, should you get Driftland: The Magic Revival? The answer all depends if you like strategy games. If yes, give it a go, because while it isn't a fantastic game, it's certainly good and worth trying out.

Copy provided by the publisher. Played on an ultrawide monitor running at 2560×1080 resolution from a PC with an Intel i7-6700 3.4GHz x4 CPU, an Asus Radeon RX480 GPU and 32GB of DDR4 2400MHz RAM. On max settings, the game averaged at around 32FPS, dropping to around 27FPS when zooming in on an action-packed or busy area. 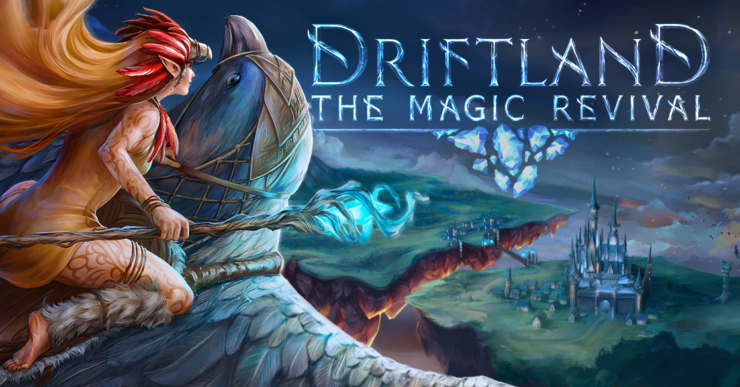 Driftland: The Magic Revival offers an interesting turn on strategy games, both with a unique setting and interesting hands-off control system, which can offer some especially compelling gameplay online and in a skirmish. However, despite the interesting setting, too little is used from it in what is an anaemic at best campaign and a very much limited and shared asset pool between factions. Despite these issues, there is an enjoyable time to be found here, especially for strategy fans.