Dragon Warrior, as the Dragon Quest series was once known in the States, was my very first introduction to the JRPG genre. This simple tale of a single hero venturing out into a quest to save the world from the Dragonlord was something that forever shaped my impressionable taste in NES games for years to come. As I grew up, so too did the adventures. These quests quickly expanded to feature a full party of like-minded adventurers and so too did my small circle of friends as I grew of age. When I was at the peak of my junior high days, Dragon Quest VII was there to keep me company when I fell sick for a week. Then, shortly before I left my home state of Colorado and headed out East, I played dozens of hours of Dragon Quest IX with friends at the local game store and perfected my fan waving skills while everyone else went with swords and spears. Needless to say, it’s been a series that has been a part of my life for as long as I can remember. Now, just after my thirty-first birthday, a new chapter of my life has begun anew and so too has the first new Dragon Quest title to be translated into English in so many years: Dragon Quest XI: Echoes of an Elusive Age. 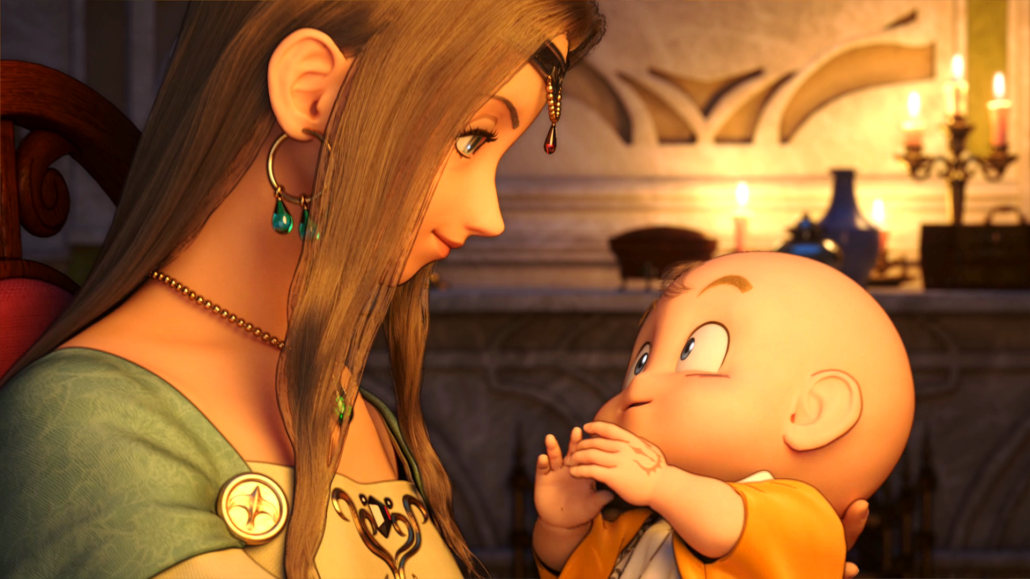 Born of royal blood and branded with the Mark of the Luminary, Dragon Quest XI’s main character should herald in an age of light and hope. Instead, as some fear that the coming of the Luminary also marks that of a great evil, what should be a celebrated birth is instead a night of uprising and an attempted assassination on the newborn’s life. The Luminary is then whisked away to live in hiding at a rustic country village until he comes of age and the opening act of Dragon Quest XI can truly begin.

Taking the role of the Luminary, players will travel across the land of Erdrea, befriending new party members, and solving minor problems that ail the common man as a method to renew faith in the light of the Luminary. If darkness exists in the land, then so too must light. It’s only by adventuring and by virtue of random battle that the Luminary can gain in power to strike down the true darkness and restore hope to the world. 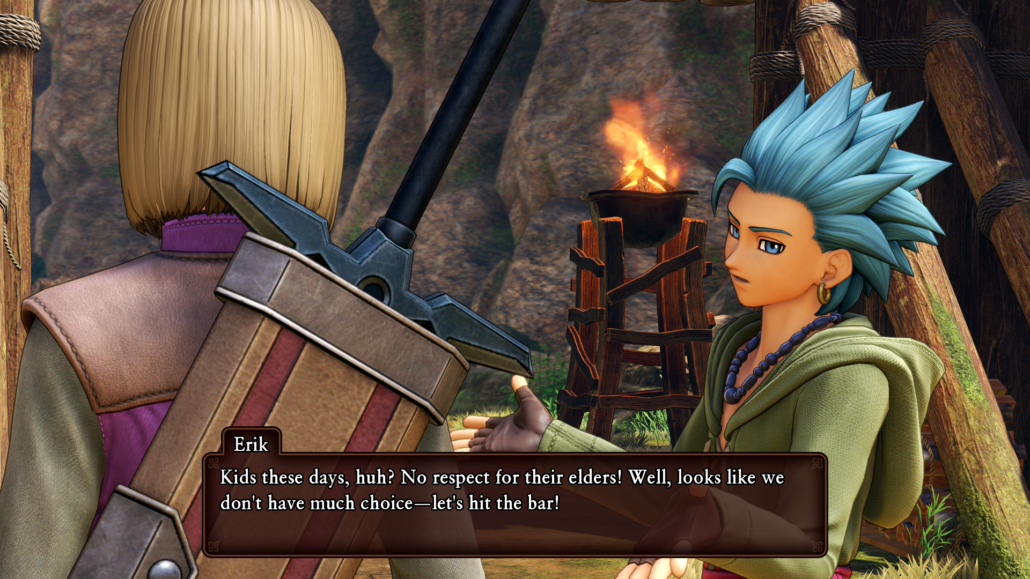 The diversions that keep the Luminary and crew from achieving their goal are often based upon fairy tales of the real world. For as predictable as some story beats can be, Dragon Quest XI still keeps a few surprises up its sleeve. Many locations build their story moments around popular folklore around the world but bring a very unique Dragon Quest-spin on the classics. Mermaids, living paintings, and muscled cage fighters all cross paths with the Luminary and each have their own stories to play through. Because of this, each region that the players travel through feel distinctively different from one another and the various biomes of the land come together to create a world map that’s worth exploring throughout to find every secret.

Dragon Quest has traditionally been a series that I’ve felt has pacing issues with how the narrative is told. I most famously recall Dragon Quest VII taking close to four hours the first time I played it before I even got into my first random battle. Dragon Quest XI doesn’t come anywhere close to that extreme, opening with action almost immediately and event after event to help establish the world of Erdrea and give the Luminary purpose for their adventure. 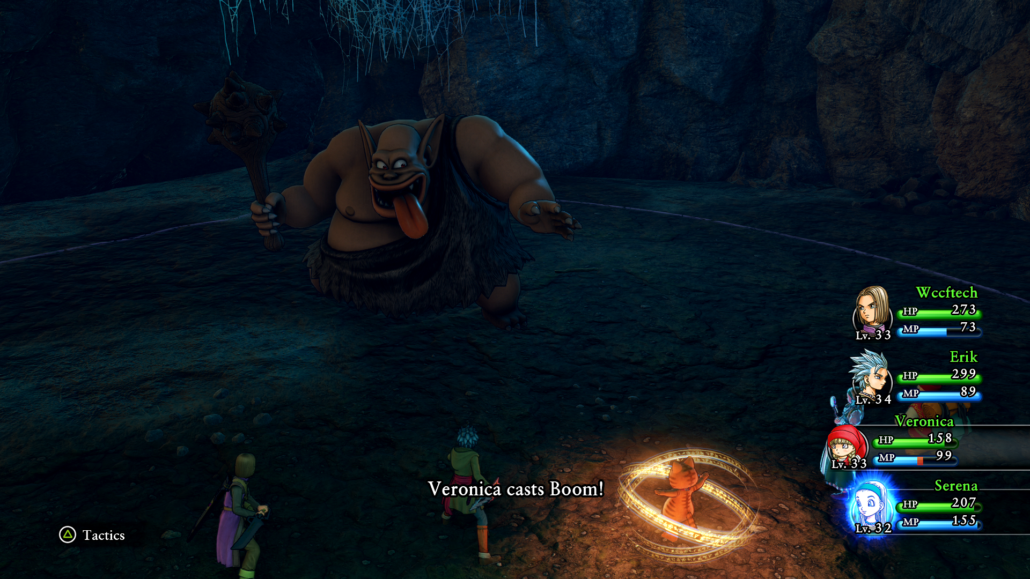 Roughly halfway through the story, major events cause all of that momentum to crash to a halt and focus more on a filler event that does so little to propel the narrative. These events are such a spectacle in the story that you’ll know it when you see it, but even mentioning the timing can be a major spoiler of itself. It’s at this turning point that the storytelling takes a massive downturn and instead focuses on revisiting places that you’ve already rescued from danger to see what’s changed and what new manner of curse or monster has invaded the land. All of this leads into a postgame that sends players once again traveling to familiar regions in search of parts to craft the True Sword of Light and fend off a secret boss that will require far more leveling and preparation than any other challenge in Dragon Quest XI. Truth be told, my final ending time came close to 150 hours during my exploration of Erdrea and the hunt for the first platinum trophy. 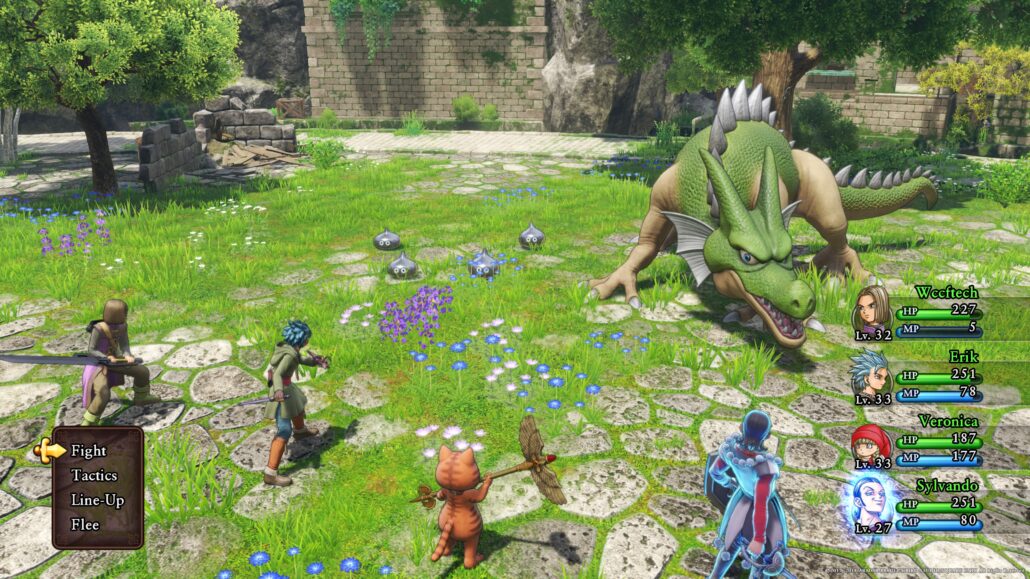 Dragon Quest XI’s combat represents some of the best turn-based fights to come out of Japan in recent years. Fights themselves are menu-driven with basic options such as attacking, using items, or character-specific spells and abilities. Each character stays humble in their attacks, usually only striking for a few dozen points of damage at best for most of the adventure rather than the thousands of damage that you’d see in a typical Final Fantasy battle. Boss fights are balanced in such a way that following the critical path will always prove to give the player a challenge, but straying away and taking a few extra minutes to complete a side quest or grind can make that area a bit easier until the challenge ramps back up in the next region. Even random encounters are tuned to allow your team to shine in their own respective ways. Status effects are especially effective as ways to keep the enemy forces sedated or for those who keep Erik or Sylvando geared with daggers, ready to be critically struck by weapon skills that can take advantage of such a situation. A Dragon ball-esque power-up can affect each party member individually and once certain member combinations are psyched up, powerful attacks can swiftly turn the tide of battle. Once you’ve gained a few levels above the monsters you’re fighting, auto-attacking and letting the AI control the party removes much of the challenge from Dragon Quest XI. 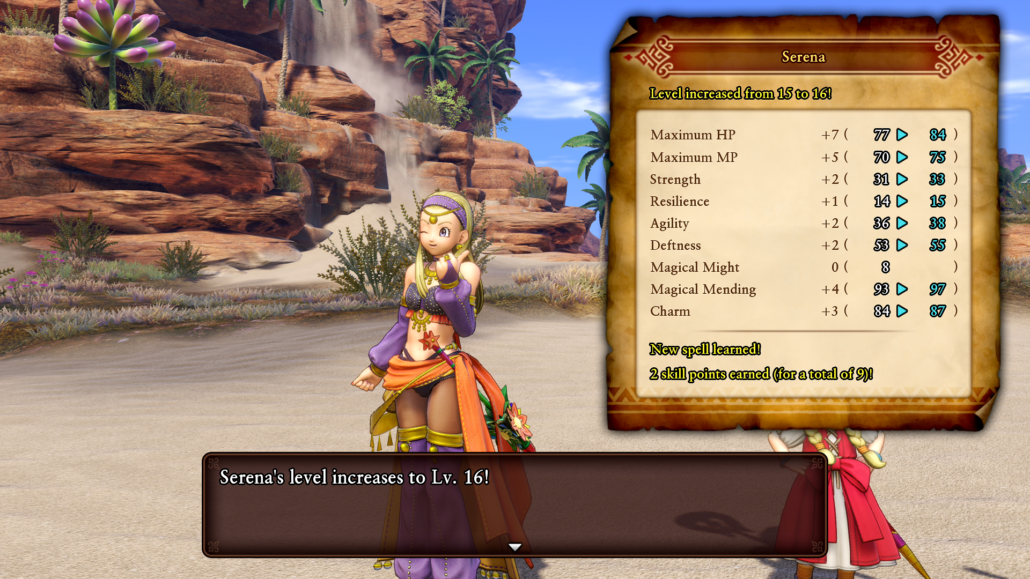 Even without the use of grinding to keep your party ahead of the curve, Dragon Quest XI never feels like it punishes the player when it comes time to do battle. Each character brings their own strengths to their side of the fight, bearing multiple weapons to equip and their own assortment of spells and abilities (not all of the characters are magic users, of course). If you wind up entering a boss battle against a giant ice creature and didn’t bring anyone that could cast a handy fire spell, there’s no need to worry about loading from a previous save. Party members can be freely swapped around between turns with the whole team gaining full experience regardless of participating in the skirmish or not. No more having to rotate everyone in on a metal slime fight just to keep everyone’s average levels up as in other JRPG’s. If you do want the added challenge, Draconian Quest settings can be toggled on, giving restrictions on various aspects of the adventure such as limited access to armor and item shops or greatly reduced experience gain. 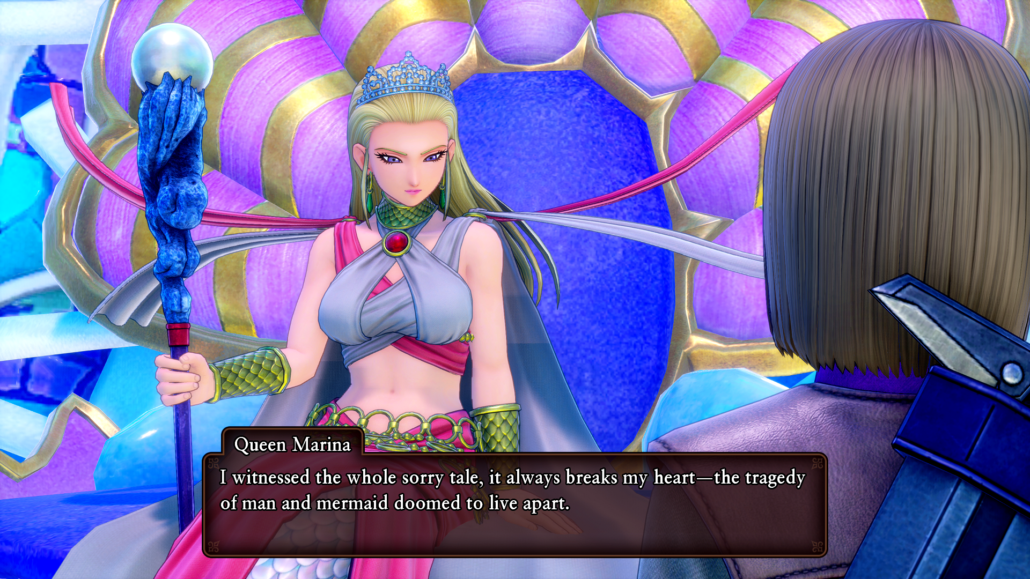 Being the first Dragon Quest title developed with Unreal Engine 4 in mind, Echoes of an Elusive Age looks absolutely stunning on the PlayStation 4 Pro. Toriyama’s character designs don’t aim for a super realistic design but instead, keep his distinctive faces and armor designs as clean as can be without any rough edges. There’s a very clean look to the world of Erdrea that gives Dragon Quest XI a timeless appearance on modern hardware and the few cutscenes that aren’t rendered in-engine are some of Square-Enix’s best work to date. With multiple costumes for each of the Hero’s party to don (which do show up in most cutscenes), everyone will keep looking their best in any occasion.