It’s understandable why so many games would take a leaf from Minecraft’s book. Dragon Quest Builders isn’t the first series to mix its signature gameplay in a Minecraft-style world and environment, and it won’t be the last, but it might be one of the most successful. Minecraft’s lack of plot, direction and any actual scoring system to speak of mean players are left to their own devices for the most part, while Dragon Quest Builders goes for a very hands-on, organized approach which should, by all rights, strip the player of freedom. But instead, it makes for a more streamlined, enjoyable gaming experience.

The basics are (or should be) pretty obvious. We have a Minecraft style world filled with voxels which you can break apart and place in another location at will. It goes a little further than Minecraft’s simplistic world though, with proper 3D models for many parts of the environment. Actually rounded logs and stones, for example. Dragon Quest Builders isn’t beholden to any art style but the one developed by Akira Toriyama - the blocks aren’t there as an art style decision, they’re there to function as blocks, simple to place and connect, nothing more. 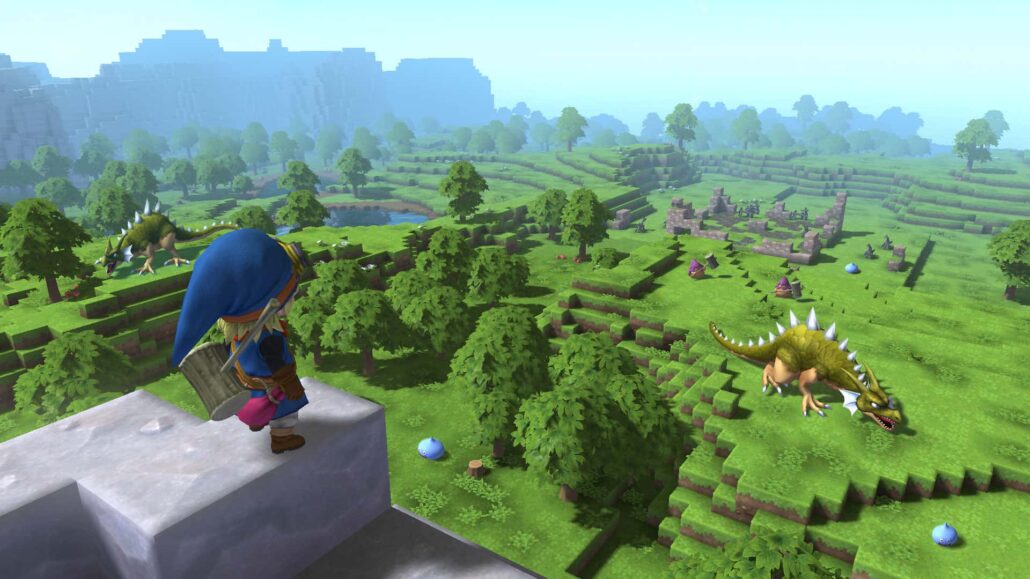 It’s taking a very different approach from similar games that have popped up since Minecraft’s wave of popularity. Instead of letting players loose in a world to create their own things, Dragon Quest Builders gives players a fairly strict list of quests to complete, like a typical RPG, but gives players creative freedom in how they’re achieved. The game will task players for building a bedroom, or a kitchen, or other designated rooms. Players will be given simple rules; the walls must be two blocks high on all sides, the room must have a door, and must have some essential furnishings, such as somewhere to cook for the kitchen. Outside of those basic rules though, players can really flex their creativity, and can even start making towering structures with multiple rooms.

Extra furnishings will only enhance the amount of points your room scores too, and those points contribute to an overall level of your town. Suddenly, the act of creating a settlement or home base, similar to what many people do in Minecraft anyway, has an actual in-game reward for completion, and still gives you the same kind of freedom you’re already used to. 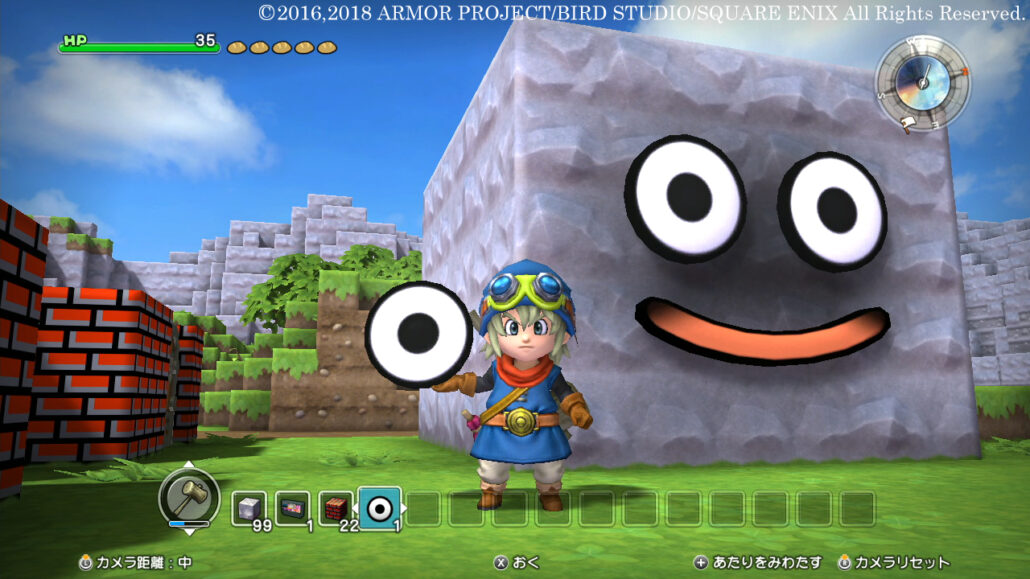 That’s not to say it’s all that free, though. At other times you’ll be given a blueprint for a room which you lay on the ground, and then you’ll have to place the blocks and pieces of furniture in specific locations to complete the quest. It’s not so bad though - these don’t come along too often and are never difficult to put into place.

The quest structure of the game neatly pulls you along through the eccentricities of the crafting system and how you build room. Each quest gives you a simple goal and for a long time, each is just there to explain how a mechanic of each room works or asks you to craft a certain item so you understand the item and the materials you need to make it.

It’s a very gentle learning curve, and the battle system continues this simple gameplay style. Move up, attack, move out of range to dodge, then move up and attack again. You use the same weapon to break and collect items that you do to attack, and it’s as simple as that. You do HP damage, whether to blocks or enemies, until they’re either defeated or you break them. It’s as simple as it can be and works incredibly well. Later on, the range of weaponry includes all the traditional Dragon Quest repertoire, and so do the enemies. Of course, you’ll be introduced to the iconic Slime monsters at first and later skeleton warriors, until you start taking down some mean boss monsters. 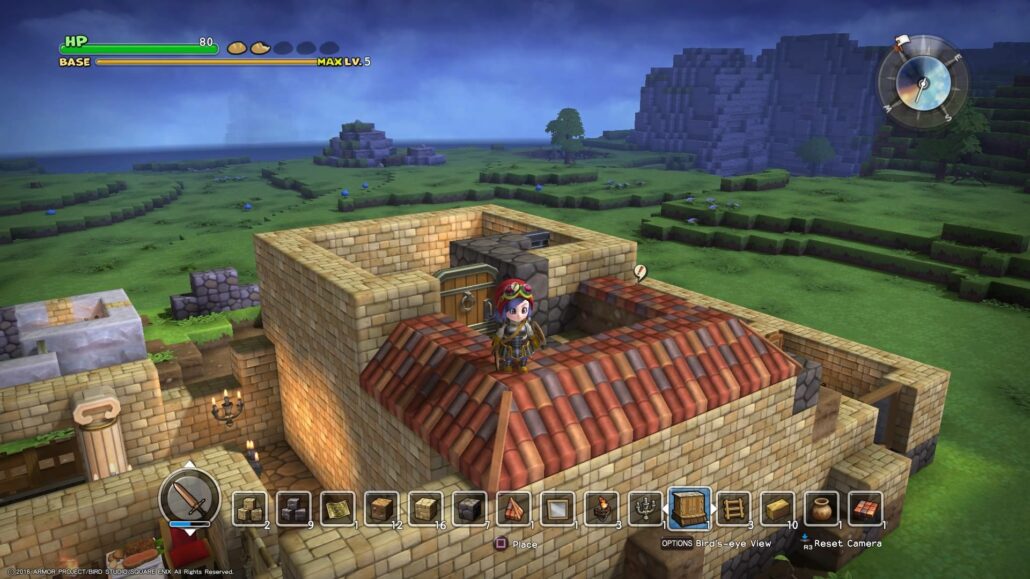 It is, by far, the best fusion of RPG and Minecraft mechanics that I’ve seen to date, and also the most accessible. What’s nice is that it’s fairly obviously aimed at a younger crowd, as most Minecraft inspired games and merchandise are, the mechanics are still pure and enjoyable enough to enjoy for all ages. This is good, light-hearted RPG fun, with some room for creativity; perhaps not as much as the game it is inspired by, but plenty to remain fun and entertaining. And in small bursts, it’s a perfect game to pick up and put down, which makes the Switch a great platform for it.

The Nintendo Switch’s hybrid handheld/home console form factor is wonderful and has enhanced plenty of games. It does a good job with Dragon Quest Builders, too. If you’ve played the game on PlayStation 4 already, you won’t be blown away by the Switch. On the TV, the Switch’s resolution isn’t fantastic, and framerate isn’t always stable, but it plays fine, and the game’s art style carries through past the resolution. In handheld mode, the game looks incredibly crisp and plays great on the go. Small sessions on the train or bus are fine because you can easily harvest some materials, craft a new item, or furnish a room.

Dragon Quest Builders is the best fusion of Minecraft’s signature blocky building style and RPG mechanics that we’ve seen, in a few ways that may even make it a better option than the game that inspired it. It’s great on Nintendo Switch too, but it should only be the version you pick if you’ll be playing on the go.

A lovely art style combines with some great crafting mechanics in this delightful RPG. It really is the best Minecraft-like I’ve seen, and with the charming Toriyama art style and more structured progression system, it’s a game you can play for hours. Recommended for young gamers, Dragon Quest fans, and anyone looking for something new on Nintendo Switch.