I’ve always had a bit of a love-hate relationship with the Final Fantasy series. As young’un, I felt a bit alienated, as an N64 owner I never had access to Final Fantasy VII or any of the other games my friends told me were amazing, Instead I just had to nod along while playing my Gamecube, as my pals told me that Final Fantasy X was, in fact, great, despite half being about pop stars or something like that. As the years went on I managed to enjoy the series in small bursts. Final Fantasy Tactics, Final Fantasy III when it came to DS, and most recently Final Fantasy XV, which I played more than 100 hours of, despite some of the problems that game has.

So even though my nostalgia for the series is very limited compared to many, I have a fair amount of fondness for it, like the pretty girl who works at the coffee shop who has a nice smile but you only go to for coffee, nothing more. So now I’m on a date with Dissidia Final Fantasy NT. She’s an absolute looker, stunning in everything she wears, and turns heads wherever we go. But despite the fondness I felt from afar, having to get up close and personal with my dear Dissidia has been a very mixed experience.

My first experience with Dissidia Final Fantasy NT took place with a demo during a busy gaming expo - even then and there, I knew the short time you get with a demo like that was never going to help me understand the complex mechanics that Dissidia has in play. Heck, it’s barely enough time to understand the Brave system, let alone anything else. Luckily, after a bit more time with the game, it all comes together and starts making sense, but you have to work to understand it. After playing through the initial tutorial, I still felt like I had no idea how to play.

In Dissidia Final Fantasy NT you’ll fight in small teams of three against another team of three in two types of game modes, an all-out brawl in Basic battles, and a mix of point control and a shared health bar in Crystal battles. In Basic battles, you simply must whittle away at your opponent’s Brave meter and then turn that Brave damage into permanent Health damage with an HP Attack. It’s confusing at first but begins to make sense after a few hours of play. Take down the health of three opponents and you’ll win a Basic battle.

Crystal battles are a bit more interesting as you protect a crystal, and on the other side of the battlefield your opponents do the same. If you stand near your crystal it won’t take damage, but if you get hit with a Brave combo you’re guaranteed to be knocked flying out of the crystal’s range, allowing your opponent to do damage. Once the crystal is dead, that team loses.

The two battle types highlight a number of issues with the combat in the game, but also a number of fun eccentricities. Of course, for one, the three vs three set up means if you have two on one, which can happen quite easily, things go wrong very quickly - there’s safety in numbers, and if you go up against numbers, you’ll easily get overwhelmed.

The knockback from moves is another questionable decision. Dissidia’s battles take place on large open fields, and hard attacks will knock enemies flying away - bouncing them into walls will allow you to continue and extend your combos, which is nice. The problem with the knockback is that you can rarely see what enemies are doing. What animation are they in, are they throwing an attack, are they summoning? You can’t tell because of the vast distance between you, and you often won’t be able to tell until it’s too late.

The distance also means that a prevailing strategy comes up quickly, which is using ranged attacks and keeping your distance. Ranged characters, Marksmen, definitely have less combo opportunities, but if you stay mobile it feels like they have a massive advantage over other characters that will end up struggling to get close to you.

The combat is pretty well balanced, but I would struggle to say that it’s fun. Being able to take down enemies online and proving your worth against other players always feels great and satisfying, but as soon as you remove real online players from the equation it starts to drag incredibly hard, especially if you’re grinding for Memoria.

Ah, Memoria. The very worst of Dissidia Final Fantasy NT. Now, for many players who aren’t big fans of competitive games, the story mode is their saving grace. Not only does it give them a quick, enjoyable experience to help them feel like they got their money’s worth, but it’s always nice to see the characters of the world interact with each other. Here, the game doesn’t want you to play the story. Or at least, it doesn’t want you to without experiencing the rest of the game too. To unlock cutscenes and battles in story mode, you must earn Memoria. You start with one, allowing you to unlock a single cutscene. Then story mode stops. What should you do? Well, you have to either grind against Gauntlet - that’s essentially a six-round arcade mode - or go online to earn more. Players who aren’t confident with their competitive skills won’t be happy to know that there’s no “casual” online mode, here it’s Ranked only.

Locking the story mode away behind these arbitrary unlocks is completely baffling, and makes it so that players going into Dissidia for a quick story mode experience are going to be entirely disappointed. It makes sense, I see what they’re doing. This way, players will have to play a variety of game modes in order to continue on their path, and progression in any mode also counts towards story progression. Lovely. Only instead of highlight how much there is to do, it shows that Dissidia Final Fantasy NT is a game completely lacking in content.

There’s the story, which you won’t be able to play for long without jumping into another mode. There’s online Ranked. There’s Gauntlet. That’s it. Heck, there’s not even a proper you vs programmable bot mode, basically a traditional fighting game training mode, for the people that want it. Sure, if you progress in Story mode you’ll earn special Gauntlets relating to the characters in the story to play through, but I’d be lying if I said they were worth it. They offer no extra story content, they are just, ultimately, another Gauntlet. Another arcade mode run. Another opportunity to earn Memoria and not much else.

Dissidia reminds me keenly of another online game from the last year, and that’s For Honor. Small team PVP, point capture, incredibly unfair in two vs one situations? Yep, that’s For Honor alright, except here everything just feels bigger and worse. The attacks are big and flashy, but the animations are hard to read and make for a poor competitive environment. So yeah, it does For Honor, but not as good as For Honor. What a surprise.

But the biggest problem with Dissidia Final Fantasy NT for me has to be that this should be a celebration of Final Fantasy. The entire franchise should be celebrated here but instead, Dissidia feels hollow. This a shallow gaming experience with not much content, whereas it should be a massive fanfare for the series as a whole. Instead of something like a big budget Smash Bros. which celebrates Nintendo history, Square Enix and Team Ninja have put together a PlayStation All-Stars which only goes to show that this franchise has desperately needed more love than this for a long time. 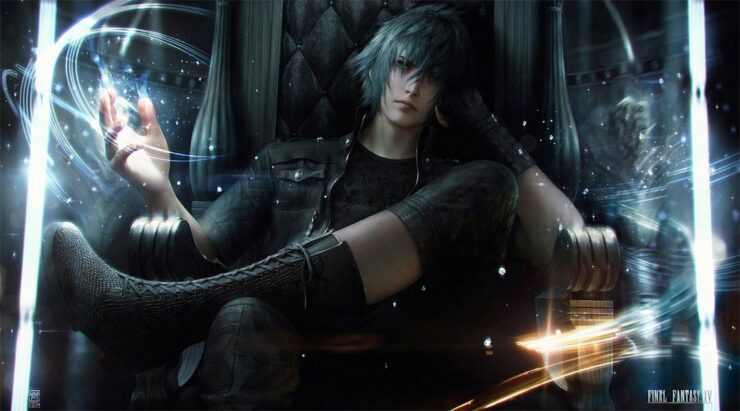 Dissidia Final Fantasy NT should be a celebration of the series as a whole and instead makes the franchise feel washed up. Character interactions are nice and graphics are definitely pretty, but mechanically the game feels behinds its competition and far more frustrating. Only recommended for the most hardcore of Final Fantasy fans, but even then, no local multiplayer? What’s the point?