Tabletop roleplaying games don’t always refer to themselves as games. It's a bit of challenge given what the G stands for in RPG, but it makes sense in a way. When all the players sit around the table with Games Master at the helm, it isn’t exactly about winning. It's about telling stories. Cooperative storytelling experiences are some of the most satisfying and fascinating experiences you can have, and Disco Elysium might the first video game that captures that same feeling.

In Disco Elysium, you are a detective trying to resolve a murder. From the looks of things, you’ve solved it once, got blackout drunk and destroyed all your deductions. Bravo! But while you’re doing all these things that look and sound like your typical top-down RPG, like dialogue branches, ability checks, and searching the environment, the experience itself is quite different. You never exactly feel like you’re competing against the computer. Even when NPCs are purposely withholding evidence, and you know it, it all adds to the story. Instead, it feels like you’re working with the game to tell a story.

And that narrative is fantastic. What starts as a simple lynching quickly spiral into past revolutions, union action, and possible supernatural threats, all encapsulated in an intriguing world that you won’t want to leave. But even when you fail skill checks, which is a simple probability engine, it still feels like you are progressing with the game rather than fighting it. Angering a witness might feel like a punishment in other games, but in Disco, it’s just the push you need to find a new clue or lean on that one mysterious character you’ve been avoiding.

The characters you’ll meet in the game are some of the most interesting, and with partial voice over its so easy to lose yourself in the interweaving conversations and lore that comes from talking to everyone you come across. But while the acting and writing are fantastic, the actual recording can be a little tinny. It sounds like some of the characters were recorded on poor quality microphones and it's immediately noticeable, breaking an otherwise incredible performance.

One of the reasons it's so jarring is because the rest of the audio is truly incredible. From the glum, alien music that drifts in from the city you’re exploring, to even the electric sound of the ability checks, its a game you’ll want to play with headphones whenever possible.

Some of the best characters you’ll come across though exist only in your own head. We’ve all played games where characters have protracted conversations with themselves because the developers couldn’t find another way of telling the player that information. Disco Elysium is different. Here players are subjected to long conversations with different aspects of their personality, helping guide their decisions and fill in some of the missing information that came with the alcohol-based amnesia. At the beginning of Disco Elysium you'll choose what archetype to play, basically whether you want to be smart, feeling, charismatic or strong. I went with feeling, so the strongest voices in my head had strange names like Shiver and Inland Empire.

The game lets you understand what these voices represent as you play, with beautiful and yet vague descriptions helping you figure it out. It's a fascinating experience that progresses the story and is often very funny as well. In fact, all the writing in the game is great fun, either thanks to beautiful imagery or witty nonsense. One standout moment early in the game, assuming you wander in the same direction I did, will have you discussing communism. In this moment I had the option to back the ideology, dismiss it, or claim to part of a secret other option. And later on, one of my inner thoughts debated whether I would, in fact, become a communist because of some of my previous choices.

It's things like this, moments that have you develop your character not in menus but through conversations, that make it feel more like a genuine tabletop roleplaying game. That being said, there are some cryptic menus that let you explore games (costing in-game time) and spend points to improve the skills and voices in your head. The game lets you discover these systems on your own and it works so well I feel the experimental approach really helps you connect with the character.

Outside the voices in your head, the game is beautiful. The early area, a once precise coastal area decimated by old fighting and economic stagnation, is striking and enticing. History in Disco Elysium is steeped on top of itself and makes the world really worth just looking at. Exploring isn’t always safe though, but not in the typical fashion. Combat does really exist, so if you’re after something like Divinity: Original Sin or Pillars of Eternity you’ll be in for a surprise. Again like in tabletop games, Disco has you rolling invisible dice to commit most actions, but you do have a health and morale meter that can be damaged. What’s particularly exciting is the damage could come even from a conversation, always keeping you on your toes as you explore the world. In an apartment block, I lost a chunk of health just by looking at a piece of graffiti.

There is next to nothing not to enjoy about Disco Elysium. It might not be exactly what you expect (in fact, if it is you’ve clearly read too much about it in advance), but it does precisely what the developers wanted and it works so well in drawing you into a genuinely incredible world and story that it's a hard game to put down. Whether you’re racing the clock to catch that witness or having political conversations with the part of your brain that normally wants you to punch things, Disco Elysium is a unique gaming experience that should be attempted by everyone.

Review code provided by the publisher. You can get a digital copy directly via Steam. 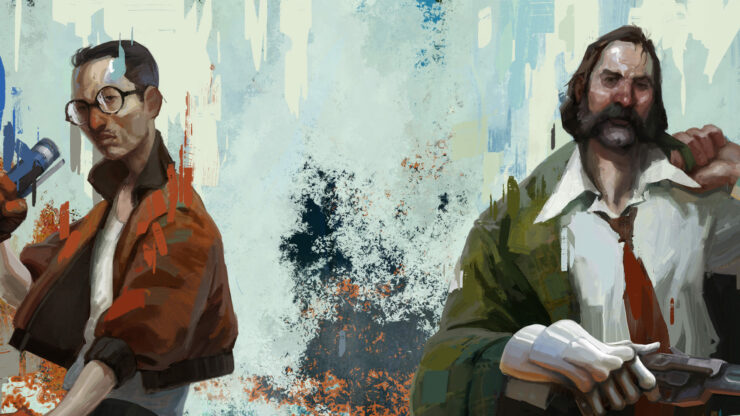 It's impossible not to fall for Disco Elysium, from its intriguing murder detective work to the world it depicts, not to mention the voices inside your own head. It's an experience that could easily make the top of some Game of Year lists and for good reason.