20 years is a long time to play runner up. Digimon began life in 1997 as a Tamagotchi successor before transforming into a bald-faced Pokémon imitation, but it’s never come close to matching the popularity or cultural cachet of either franchise. And yet, Digimon marches on, usually releasing at least one new game per year. Digimon Story: Cyber Sleuth – Hacker’s Memory is this year’s.

But hey, 2016’s Digimon Story: Cyber Sleuth snagged some surprisingly positive reviews (check out Wccf’s assessment here) and Hacker’s Memory sticks very closely to that game’s blueprint. In fact, it outright reuses a large percentage of its predecessor’s characters, stages, and other assets. Is Hacker’s Memory a successful return to the well? Was the original Cyber Sleuth all that great to begin with? Time to find out if this latest Digimon game is a champion…

Both Digimon Story: Cyber Sleuth games take place in a cheery dystopia where everybody happily spends most of their time in a crude alpha version of the Matrix called EDEN. This virtual world is overrun with hackers, who use Digimon to battle their rivals, commit crimes, and cause general mischief. You play as a high school kid named Keisuke (or whatever you’d prefer) who’s accused of being a hacker when his EDEN account is stolen. Our hero is so incensed by this he joins an actual hacker group in order to track down the hacker who framed him for hacking, which is some impressive circular logic.

Hacker’s Memory isn’t a true sequel to the original Cyber Sleuth, as the two games actually take place simultaneously. While Hacker’s Memory presents things from a new perspective, the broad strokes are the same – EDEN is both bleeding over into the real world and increasingly overrun with mysterious creatures called Eaters, which may somehow be linked to the “Digital World” that Digimon originally came from. Don’t worry, it makes a bit more sense in context.

Of course, doing parallel stories can be tricky. The Hacker’s Memory protagonists were nowhere to be seen in the original Cyber Sleuth, so how do you work them into the story? Do you imply they were standing just off-screen the entire time doing super important stuff of their own? Or do you just say, “To hell with it,” and tell a largely self-contained tale? Wisely, the writers of Hacker’s Memory take the latter route, spinning a more character-driven story that doesn’t get too wrapped up in the machinations of its predecessor. Characters from the first game do show up fairly frequently, but, for the most part, their appearances are little more than glorified cameos.

So, the simultaneous stories thing mostly works, but I still wouldn’t call the writing here good. Hacker’s Memory smothers a potentially decent tale in excess padding and wordy, poorly-localized cutscenes. Sure, some individual missions stand out – at various points you may find yourself investigating a haunted elevator, testing out pick-up lines on strangers, or foiling a bullied kid’s disturbing revenge plot – but, for the most part, the plot’s kind of a slog.

Hacker’s Memory pairs its dull story with an equally ho-hum presentation. This looks like a barely-remastered PS2 game, and the soundtrack is surprisingly flat considering it comes from the composer of the wonderfully offbeat Danganronpa series. At least the voice acting is solid, although it’s Japanese-only.

But hey, Digimon games are about collecting and evolving cute critters, not story, and Hacker’s Memory gets that part of the formula mostly right. Adding a Digimon to your collection is simple – once you’ve encountered a type of creature enough times in battle you’re free to summon your own copy from your friendly neighborhood Digi-Lab. This is less frustrating than Pokémon, although not having to search specific locations for Digimon makes them feel less special.

Captured Digimon can “digivolve” once you meet certain requirements and there are always multiple paths to take. Evolution is a bit of a dice roll – often most (or all) of your upgrade options are mystery Digimon you’ve yet to encounter. Thankfully, if you really hate your new virtual pet, you can de-digivolve it to its previous form, which also raises its level cap. Getting that ideal Digimon often requires lots of back-and-forth digivolving and de-digivolving as you explore all the possible upgrade paths. It’s a drawn-out, complex process (things really get baffling once obscure stats like Camaraderie and Friendship come into play later in the game), but folks who enjoy tinkering with RPG systems may find it satisfying. That said, I have to wonder who the target audience for Digimon is in 2018 – is it still kids? Because I don’t see them grasping the finer points of digi-evolution.

The digivolving mechanic is also held back by another critical issue – Digimon are kind of lame. Most of them are ugly and/or uninspired and I simply didn’t care about collecting them. Most low-level Digimon are just nondescript blobs, and way too many of the high-level ones are similar-looking dragon/dinosaur types. Not to keep comparing to Pokémon, but those games imbue their creatures with some life and personality. You feel a real attachment to your favorites. My Digimon never felt like anything more than a collection of stats and skills. So, I’ll admit, I didn’t put a huge amount of effort into crafting a Digimon all-star team, which didn’t end up being a big issue, as Hacker’s Memory is very easy. Pretty much any motley assortment of creatures will get you through.

The Cyber Sleuth games stick to a very simple turn-based battle system – you can attack, guard, use a skill or item, or try to escape. You know the drill. Every Digimon has a type and elemental attribute which impart certain strengths and weaknesses, and your monsters will occasionally launch a largely-random team attack, and that’s about it. Battles are blessedly brief, but they quickly start to feel like a grind.

Digimon Story: Cyber Sleuth - Hacker’s Memory does shake things up a little with new Domination Battles, which may be the best part of the game. These showdowns between teams of three take place on a chessboard of sorts, with each space being worth varying amounts. If you end up on the same space as a member of the opposing team, you’ll enter a standard battle, and if you win, you’ll send them back to their side of the board and claim the square. The first team to 30 points, wins. Domination Battles bring a welcome pinch of strategy to Hacker’s Memory’s usually rote combat.

Most missions tend to play out in a predictable way – do a small amount of investigating, run around fighting random battles in EDEN, then tackle a boss or Domination Battle. Almost everywhere in EDEN looks the same -- your typical generic cyber world – and you’ll have to revisit certain areas repeatedly. Those who played through the original Cyber Sleuth will have already visited some of these areas numerous times, which makes the backtracking all the more galling.

Digimon Story: Cyber Sleuth - Hacker’s Memory takes at least 40 hours to get through, but so much of that is superfluous. This could, and probably should have, been a 10 to 15-hour DLC expansion, but Bandai Namco wanted to get another $60 out of their loyal Digimaniacs. This is a classic grandma game – kids who get Hacker’s Memory from a clueless relative may be able to eke some fun out of it, but I certainly wouldn’t recommend it to anybody with the power to make their own gaming choices.

This review was based on a PS4 copy of Digimon Story: Cyber Sleuth - Hacker’s Memory provided by publisher Bandai Namco. You can purchase the game on Amazon. 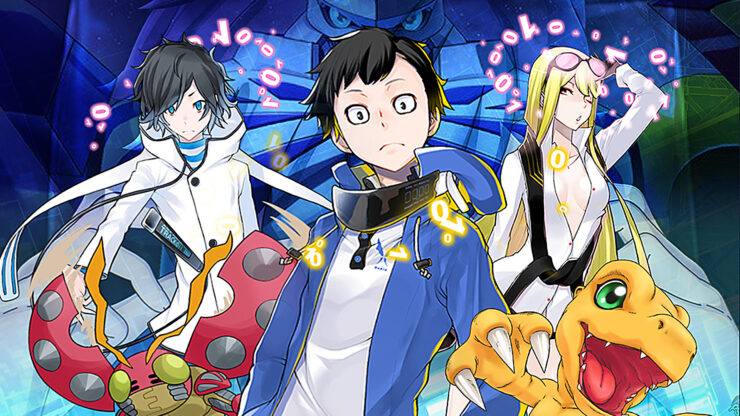 Digimon Story: Cyber Sleuth – Hacker’s Memory is a confusing product. It’s too complex and longwinded for kids, but too easy, repetitive, and derivative for most adults. The game was made with fans of the original Cyber Sleuth in mind, but will frustrate those same fans with its rampant rehashing. Hardcore Digimon devotees may find something to enjoy here, but most will want to forget Hacker's Memory.