Devilian Review – The Devil’s in the Details

Devilian is a free to play game with microtransactions.

Welcome Devilian, this is the land of Ael. Monsters roam the lands and the world is under threat by a fallen god. You are a Devilian; half Devil, half human. Your task is to save the world. However, both you and Devilian are three years late to the party. Three years have passed since the game's initial release and the only reasons you could have to try Devilian are to pass time, play a game that is simply functional and pretty.

Much like this intro, Devilian throws you right into it with no ceremony. Launch the game, select one of four classes to use, each having their own particular devil form. The classes (all gender-locked) are Berserker, Evoker, Cannoneer and Shadowhunter. After selecting your preference, you're given a wide number of options for character customization, wider than normal in options like color, as everything offers up the whole color spectrum. Bluehole Ginno's link to the developers of Tera is made plain with the character models. My character (a tall, slender and well endowed Evoker) looked like she could have come right out of Tera. 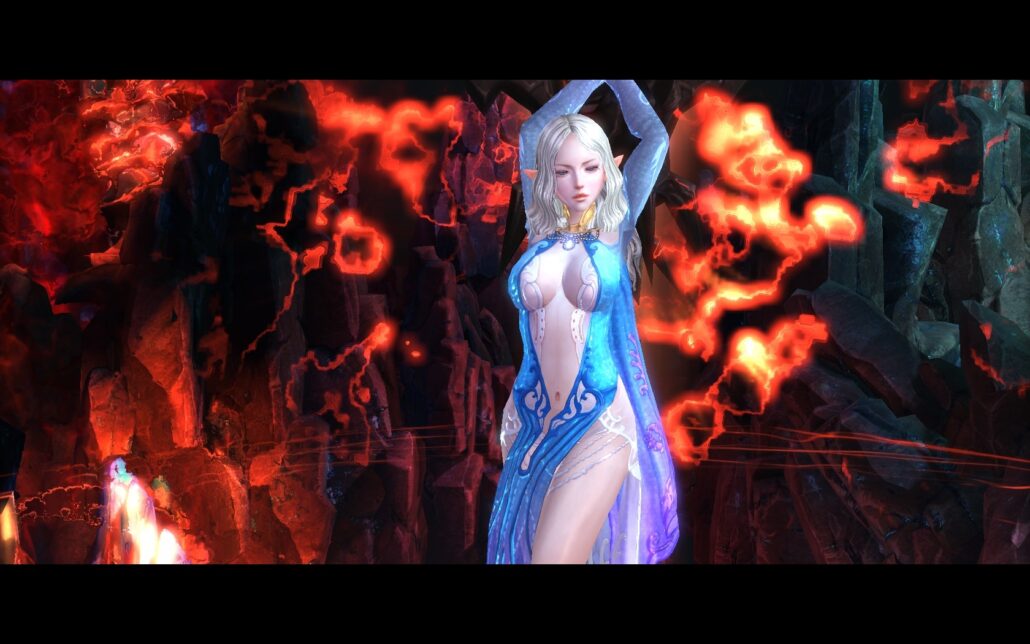 Each class has three skill trees for you to choose from when spending points gained through leveling up and select quests. If you change your mind or want to explore a different skill tree, you can refresh as much as you'd like and there's no issues. It's surprising how little is locked behind a prohibitively high in-game currency, or locked behind the F2P wall. I dare say this is primarily because once you've got a few skills you're used to, there's no real reason to explore or change as the functionality rarely alters.

So far, so standard. That's Devilian's real problem. Quests are all based on the standard: Collect items found littered around an area. Collect items dropped from monsters. Kill a number of specific creatures or, just to mix it up, talk to a particular NPC. Even the quests that offer a little variety in terms of story: You'll head into dungeons with the pretext to rescue somebody or to close an inter-dimensional rift, but you'll actually just end up killing more monsters. 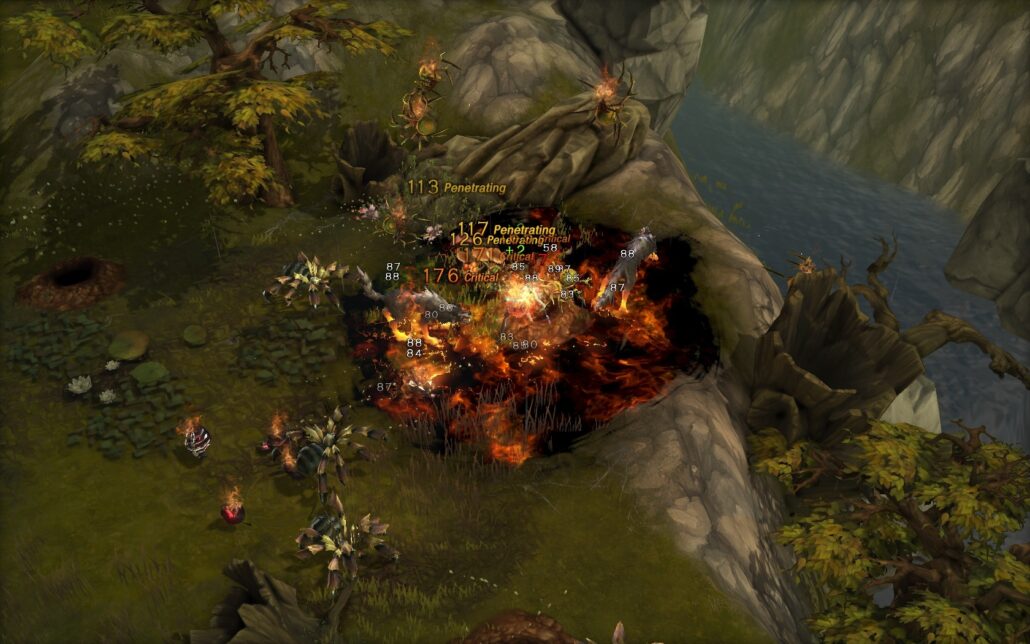 What ends up being both a positive and negative for the game is the combat system. There's no doubt that with the great visuals, combined with a number of flash skills and abilities, it's never dull to actually watch the combat unfold, though it can be dull to play through it. That's for the large part anyway. Dungeons are where the combat comes into its own, particularly later and especially so when facing against boss monsters, either by yourself or with others. The main reason for this is because the bosses are damage sinks, taking as much as you can throw at them, though rarely proving to be too much of a threat that they may beat you.

One major problem is that these dungeons are few and far between in early levels, and even later in the game they aren't as frequent as needed. Being the most exciting and interesting part of Devilian, a focus should be put on them. This is, thankfully, the case with something called the Abyssal Tower which unlocks when you reach level 23. In the tower you fight enemies across ten floors, to then face a boss monster at the end. It's the best part of Devilian. 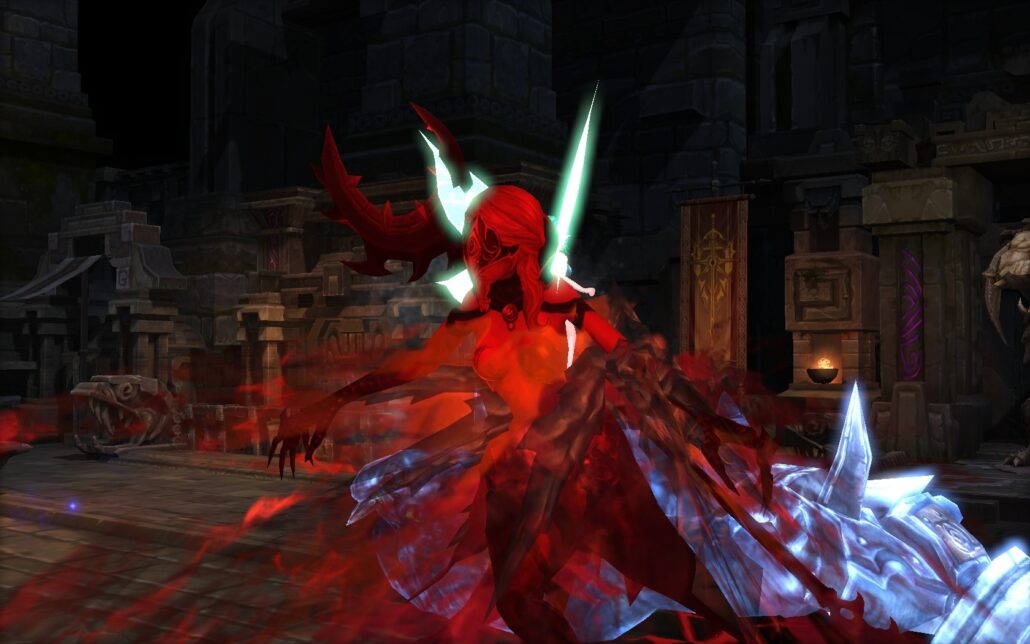 There are only two standout features of Devilian to be pointed out. The first is in the combat, the devil form. As you fight and kill more enemies, a meter builds up and once you pass a certain level you can use your devil form. The devil form offers a selection of more powerful skills and abilities, changes the appearance of your character, increases your attack power and health until the meter runs down and you revert back to your normal form. While not offering anything other than a means to kill enemies more quickly, over a limited period of time, it's still something to use to beat dungeon bosses quicker to meet time limits.

The second feature is in character customization. This is the talisman system, where you gain talismans, similar to trading cards with different buffs, which can be attached to your character. Ones that aren't attached can be used to level up and even evolve other talismans. It's an interesting little mini-game and offers you more interesting ways of personalizing your character more-so than basic equipment allows. 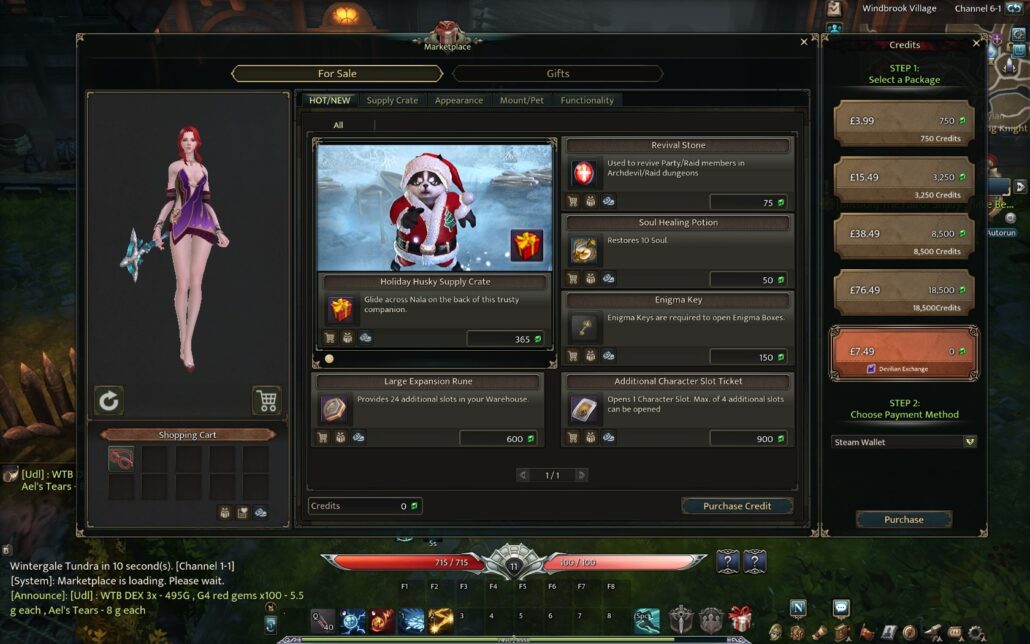 Throughout this I've only mentioned the fact that the game is free to play only once. This is simply because the offerings in the game store are focused primarily on advancing in a faster way, offering you the ability to create new characters or items that are purely cosmetic. Unless you want to try all four classes or simply increase the number of inventory or warehouse slots you have available, you won't really find the need to spend any real money.

Devilian never does anything to truly stand out from the rest, beyond the talisman system, and there's only one thing it does that is a true sin. This one thing is related to the fact that it's a MMO. Like Guild Wars 2, Devilian has dynamic events. However, where in Guild Wars 2 they would possibly be announced, though more often not, in the area you are particularly in, in Devilian each and every one (and there are so many) are announced globally to everybody playing the game. With no way to turn them off, it became more than a small annoyance to see large white text speaking of an event I had no means of participating in, every ten to twenty seconds.

All things considered, it's a passable game and one you could pass hours by as you pay attention to a TV show, film or something else in the background. I can't really recommend it beyond that. If you have friends to play it with, though, at least there are options to group, form guilds and do PvE/PvP content together.

Devilian is a well functioning MMO/ARPG but has nothing to set it apart from others, except possibly visuals. The real money elements aren't intrusive and wont force you to spend money, which is always a positive.