For a brief period in the mid-2000s the Destroy All Humans! games were suddenly everywhere, as THQ flooded gamers with yearly sequels and a barrage of edgy TV ads. But then, just as abruptly as it had begun, the invasion ended. The first Destroy all Humans game came out in 2005 and three years and three sequels later, the series was done, seemingly for good.

Well, get ready for another close encounter, as THQ Nordic has tapped Black Forest Games (Giana Sisters, Titan Quest) to remake the original Destroy All Humans for a new generation. So, does this mid-2000s relic still hold up? Was it ever all that good to begin with? Or do we need to declare our Independence Day from this franchise? Time to give this one a thorough probing… 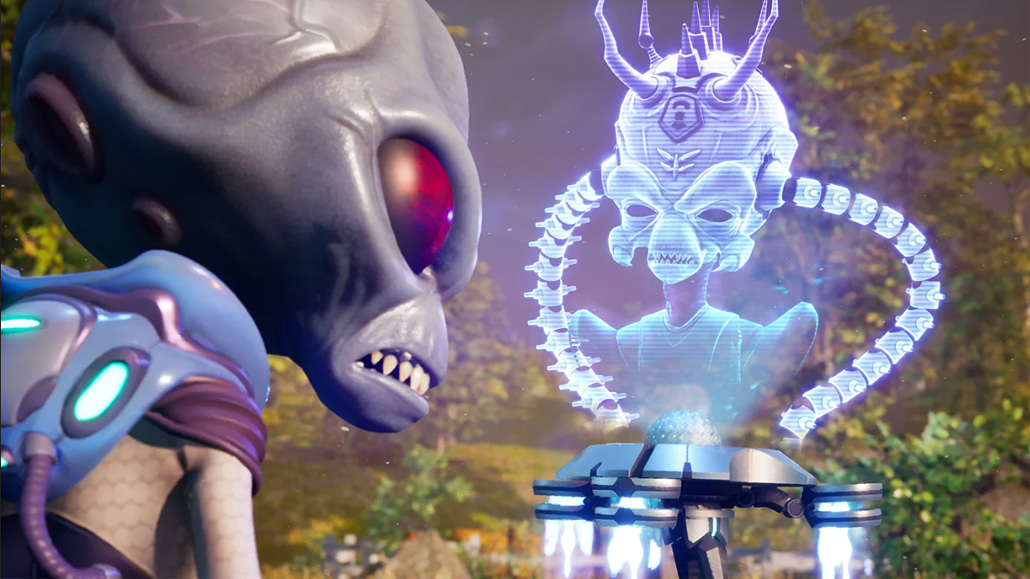 For those new to the Destroy All Humans! franchise, you play as Crypto-137, a snarky Jack-Nicholson-sounding wannabe despot from the super-advanced Furon alien race. The Furons reproduce via cloning (we see Cryto-137 come into being after Crypto-136 is offed), but their genetic stock is starting to become diluted. Thankfully, humans contain trace amounts of undegraded Furon DNA due to past, uh, “relations” between the two species, so Crypto-137 is sent to 1950s-era Earth to collect DNA the only way he knows how – by violently harvesting brains. Along the way, he gets drawn into various schemes involving corrupt politicians, the US military, and a shadowy Men-in-Black-esque organization. Honestly, the plot may be a touch too convoluted for its own good, but usually your end goal is the same – Destroy all Humans.

The new Destroy All Humans reuses the original game’s script and voice acting more or less word-for-word, which is a rather questionable creative decision. I’m not going to waste my energy browbeating an intentionally-edgy game from 15 years ago for being offensive – most people who buy this game will know what they’re getting into, and there’s even an in-game content warning for those who don’t. That said, boy howdy, is this game not funny. I mean, if you’re still into Jessica Simpson and “don’t ask, don’t tell” jokes in 2020, you’re going to be in heaven, but personally, it was rare for me to make it through a mission without audibly groaning at the gags. 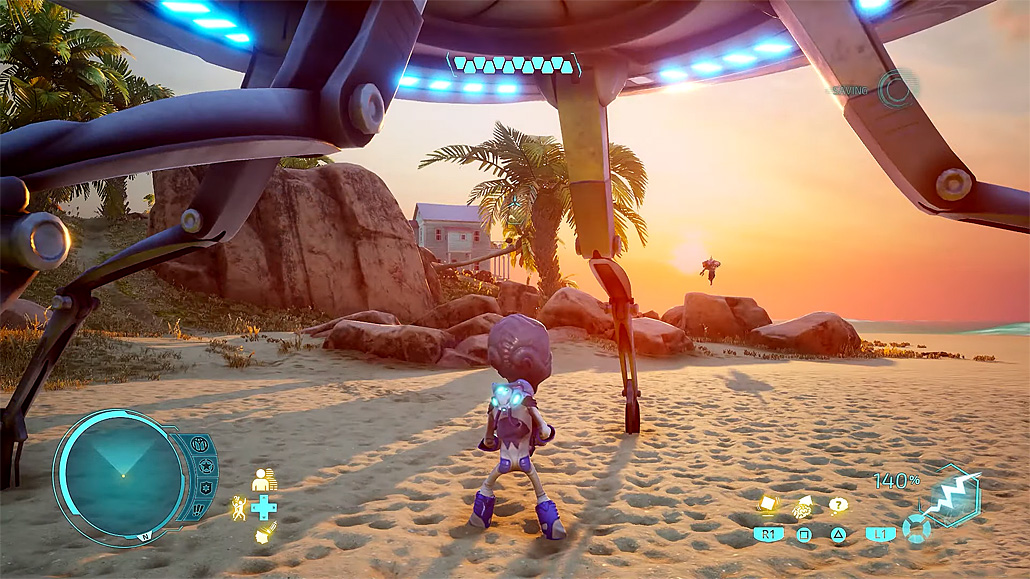 Destroy All Humans’ script may be a bit stodgy, but at least its visuals have been nicely updated. The game’s cartoony character models aren’t terribly appealing, but environments can be quite pretty and the explosions you set off while in your saucer are surprisingly badass. No complaints on a technical level either, as the game’s framerate is rock-solid during gameplay (there are a few hiccups during cutscenes) and there’s very little of the LOD pop-in and other visual hitches you usually associate with medium-budget games like this. This shouldn’t be too surprising, as this game’s levels and missions were designed to run on the PS2, but still, the level of craft on display here is refreshing. 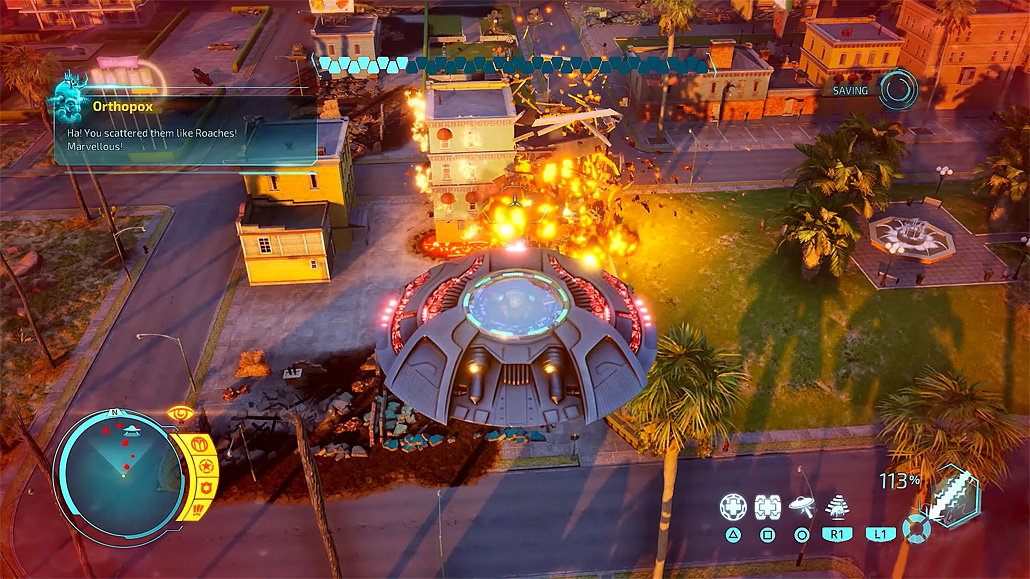 Crypto-137 is a pretty versatile guy, as he can hover with his jetpack, throw objects and enemies around with psychokinesis, deploy various weapons like the Zap-o-Matic, Disintegrator Ray, and infamous Anal Probe, and manipulate humans with a variety of mental powers. This new version of Destroy All Humans provides more opportunities for multitasking, allowing you to, say, lift a tank with PK while flying, then throw it into a group of enemies as you pepper them with your ray gun. Ultimately though, this kind of high-level strategy isn’t really required, as the game is never particularly challenging. You could argue Crypto almost does too much, with many of his powers and upgrades feeling superfluous. The game’s controls could certainly stand to be streamlined, as you’ll likely spend the first third to a half of the campaign just trying to remember what all the buttons do. 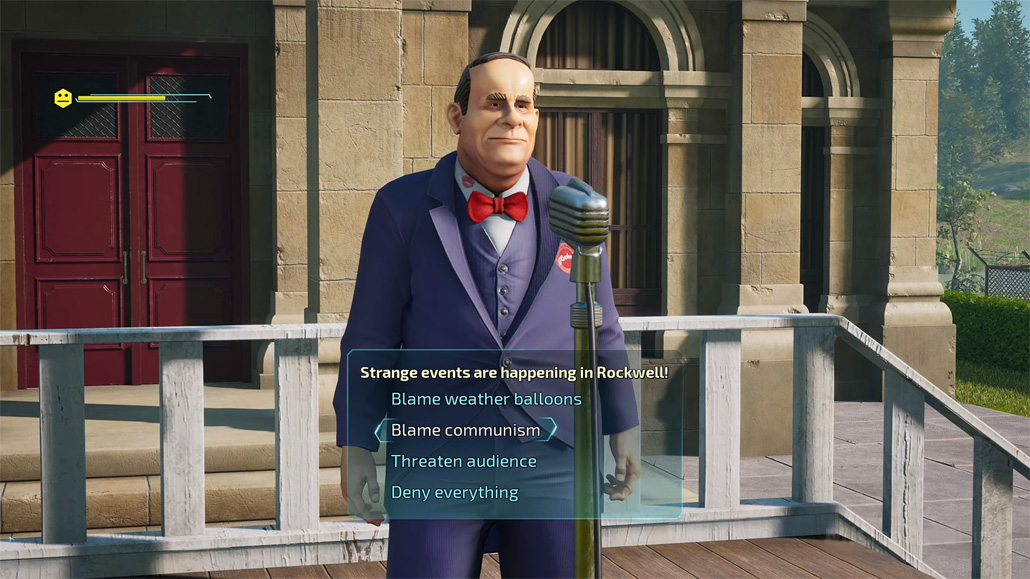 When it comes to mission design, Destroy All Humans takes a “throw everything at the wall and see what sticks” approach you don’t see that often these days. Almost every mission is unique, with objectives ranging from kidnapping the local beauty queen to setting off a nuclear bomb, to assassinating the President of the United States. Most of my favorite missions revolve around the game’s interesting take on stealth -- Crypto can disguise himself as a holographic version of any human he comes across, allowing him to collect info, sneak into restricted areas, and impersonate important people. The holographic mask wears off fairly quickly, particularly in the vicinity of certain enemies, but you can refresh your disguise by scanning the thoughts of additional humans. The DAH approach to stealth isn’t perfect, but I’ll take it over another tired exercise in creeping past enemy vision cones. In addition to the stealth stuff, the game serves up more straightforward action scenes, boss battles, flying saucer destruction-a-thons, and more.

Unfortunately, Destroy All Humans’ variety can be a double-edged sword, as not all the game’s missions are created equal. A number of missions suffer from unclear or inconsistent objectives, and some later-game base-defense and escort-style challenges are unbalanced and frustrating. Many of the game’s less successful missions could have probably been improved with just a few basic updates and balance tweaks, but Black Forest’s surface-level approach to remaking DAH means we have to replay them as is, decade-and-a-half-old warts and all. 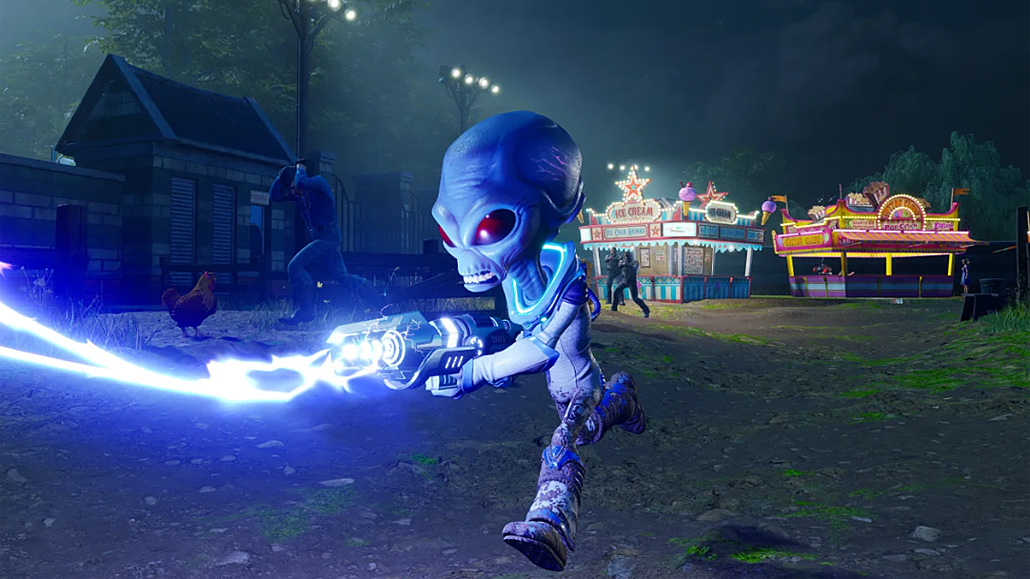 Also, despite the diverse mission design, Destroy All Humans still starts to feel a bit repetitive as its 20-or-so missions are spread over only six locations (five really, since the introductory Farm locale is only used once). The developers try to stretch their content as far as possible, with new bonus objectives, open-world challenges, and even a new “lost” mission, but this remains a game you can beat in 5 to 7 hours and fully complete in around double that time. That said, Destroy All Humans only costs $30, so you’re still getting a decent value for your space credits.

This review was based on a PS4 copy of Destroy All Humans! provided by publisher THQ Nordic. You can pre-order the game now from GameStop.

Destroy All Humans! is a respectable clone of the 2005 original, featuring impressive visuals and moments of explosive fun, but painfully-dated writing and some frustrating missions bring the game back down to earth. Destroy All Humans! is like a pristine 4K Blu-ray re-release of a campy cult movie – a certain niche audience will appreciate the effort, but many may question the point.