As the Japanese RPG genre grows and evolves in new ways, developers are often tasked with creating a more ‘hardcore’ experience to keep the long-term fans entertained, while running the risk of alienating those that might want to make the latest game their first. Every once in a while, you just need to take a step back and look at what features make your series’ great and how to incorporate new fans, while still treating those that have been there all along with something fresh and exciting. The folks at Experience Inc. have tried to solve that problem with a new dungeon JRPG that might just be one of the most accessible games of its type. 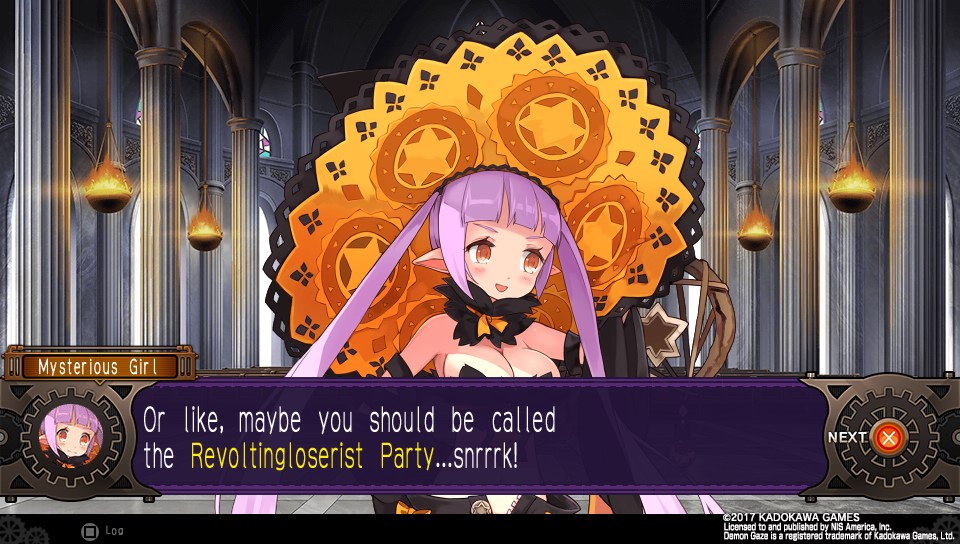 Despite being one of Experience Inc.’s rare numbered sequels, Demon Gaze II operates just fine as the first entry for players. With only little winks and nods to the previous title, such as an unlikely pair of returning characters, Demon Gaze II is very much a stand-alone experience. As a member of a revolutionary movement, the player is tasked with attempting to free the city from the oppressive regime of a dictator known as Magnastar. Through songs and star power, the voice of liberation is often guided by the Gazer to victory via pirate radio broadcasts after every successful quest. The power of music plays a surprisingly big role in Demon Gaze II’s narrative and I rather enjoyed the catchy pop tunes used to free the people from their brainwashing and rise up against Magnastar.

Experience Inc. has established themselves as developers of a very specific style of dungeon RPG. Though the settings and characters may change, the throughline for story progression and even combat itself remains fairly similar. The story of Demon Gaze II is told through a series of progressive quests, typically involving sieging a dungeon that’s under Magnastar’s control, liberating the zone by first clearing out every demon circle (a step from the first Demon Gaze), and then defeating the demon within and recruiting them to your cause. There’s not a lot of side content, save for a few optional Demons to recruit, but the game opens up with a seriously challenging postgame dungeon once you oust Magnastar from power. 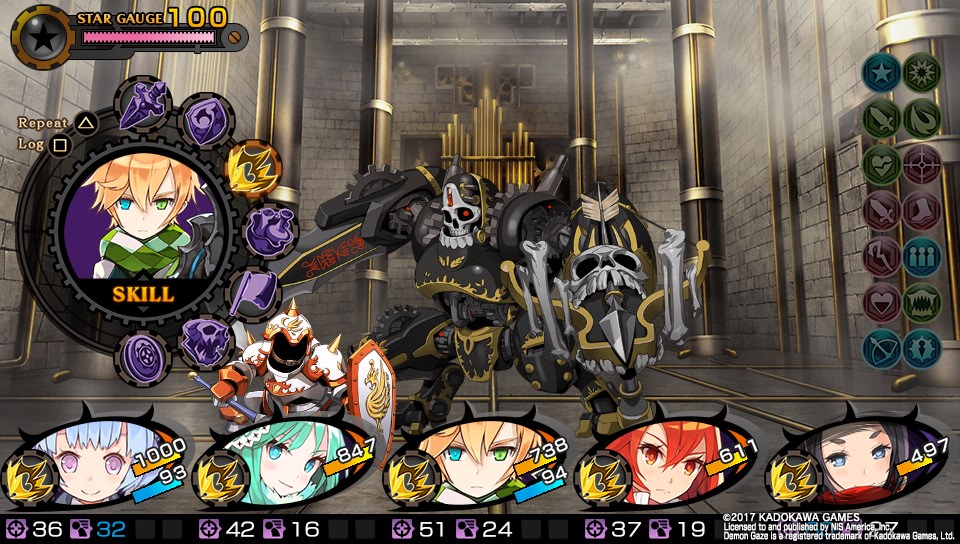 By keeping things simple, Demon Gaze II tries to lure players in with an easy-to-understand interpretation of the genre that trailblazers like Experience Inc. and the likes of Etrian Odyssey have engaged gamers for years. The promise of in-depth character creation is taken out of the players’ hands, instead giving players a roster of recruitable demons that all fit into specific archetypes. Even the main character, known as a Gazer, has a preset list of skills and equipment to wear, but the remainder can be shaped and molded as the player desires.

Each of the dozen-and-a-half recruitable demons falls into pre-defined classes that any RPG fan should recognize, whether it’s the sturdy paladin-type, the duality of mages that specialize in offensive and supporting spells, and those attackers that can take apart enemy groups at range. The individual stat allocation is up to the player, but no matter which demons you opt to include in your five-character party, bolstering their VIT scores to at least 15 should be the first priority of any demon unless you like making runs back to home base and shelling out what little money you can afford for Prometh’s resurrection spells.

Demon growth can take on a couple of additional forms, one being immediately recognizable to fans of the first Demon Gaze. By liberating demon circles within dungeons with an Artifact Gem (which are in incredibly finite supply), demons can gain skills that would otherwise be limited to specific party members. If the thought of giving your mage demons every spell in the book, aiming for these artifacts is one of the most efficient ways to create the ideal demon squad. One of my favorite demons, Scorpio, comes equipped with the unique ability ‘Astro Force’ that gives her weapons unlimited range and keep her resting comfortably in the back row. Sadly, that tried and true method of liberating a demon circle and reloading my save if I didn’t get the intended reward has yet to prove fruitful, even after two hours of loading a save just outside the final dungeon. 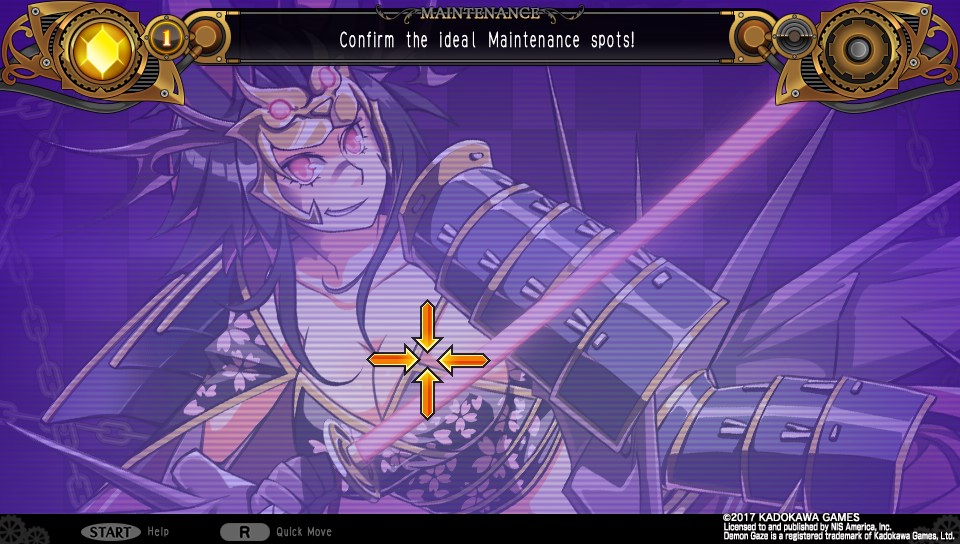 The other method of demon growth is a bit awkward, but shouldn’t be too surprising for Vita owners after even titles like Criminal Girls managed to seek a global audience. By performing what’s politely referred to as ‘Maintenance’, the Gazer is tasked with seeking out specific points on the demon’s body and poking at them in order to bolster their affection high enough to go on a visual novel-style date event. By doing so, the demon in question unlocks new skills and also extra stat boosts for either the demon or Gazer. Some of the demons that Maintenance can be performed on are questionable at best and I felt rather shameful having to put in the time with Pegasus just so I could have one of the absolute best tanks in the game protecting my party.

Demon Gaze II hits a number of tropes that Experience’s previous games offer, easing the player into them as a sort of tutorial. Each zone offers their own gimmick, from undead monsters (bring a Cleric type or choose Good alignment for a powerful skill for the Gazer), one-way doors, and even the staple underwater map that limits spell usage. By easing the player into the various traps, Demon Gaze II does a fine job of introducing new players to the various traps and tricks without overwhelming them. 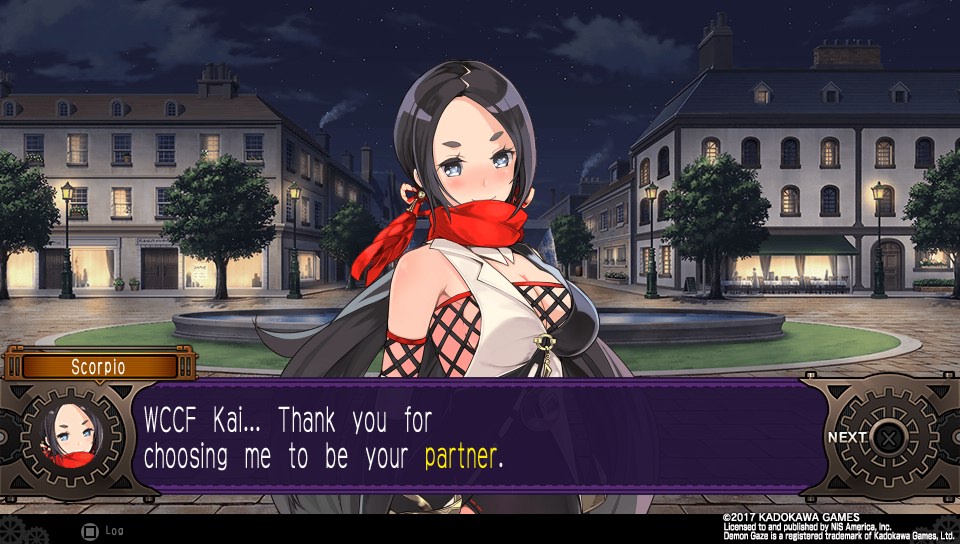 In addition, a brand new difficulty system lets players choose just how hot and spicy they like their adventures. Players that opt for a more ‘Lukewarm’ difficulty will be rewarded with an automatic resurrection that revives everyone in the party back up to full power. I’m guilty of exploiting this during my dungeon grinds and having the Paladin succumb to an instant death while I was too cheap and lazy to haul myself back to the home base and pay the modest bit of cash to revive them.

Don’t let the sequel numbering turn you away from this dungeon crawler, even if you’ve never played one before. Demon Gaze II does a great job of introducing new players to the signature style of RPG that Experience has refined down to an art. Despite the colorful designs and questionable Maintenance character development, Demon Gaze II is certainly an RPG you should experience for yourself.

Review code provided by the publisher. You can purchase the game for PlayStation 4 or PS Vita via Amazon.

Forget the big number 'II' on the title; Demon Gaze II is very much a standalone title that tones down some of Experience Inc.'s more complex systems to create a dungeon RPG that's both accessible for newcomers with some devilishly challenging endgame content once you think you've mastered the experience.