When Death Stranding first arrived nearly two years ago, it launched at a time when I had recently lost my father to MS. For more than a week, I holed myself indoors and let the task of reconnecting and rebuilding bridges be my own coping mechanism. Because of this, I held Death Stranding in a special place in my heart but never had the heart to finish. I’d come back from time to time to check on the highway I was slowly piecing back together or transport the odd amount of cargo here and there. After some time, I left Sam and B.B. alone for more than a year and a half until it was time to come back around once again for the Director’s Cut of Death Stranding, this time with a native PlayStation 5 release. Death Stranding, in its most reductive form, is an experience that revolves around delivering parcels and building connections. While there is combat and action in some of the gameplay and missions, much of what players will experience is a serene walking experience from one end of a battered and torn United States to the other, all the while trying to expand a network of influence and experience. To do so, the player steps into the shoes of one Sam “Porter” Bridges, a courier that’s often regarded as The Great Deliverer.

Delivering parcels isn’t simply just walking from one city to the next. Sam has access to the Chiral Network, a sort of infrastructure that allows him to build out mailboxes and other simple structures to new buildings that completely transform how Sam gets around, from Ziplines and highways to the new cargo catapults. If you’re picking back up from PlayStation 4, once you upload your save from the main menu of that version, you can start back up again on PlayStation 5 with all of your progress carried over (and automatically popping most of the trophies that didn’t get expanded on in the Death Stranding Director’s Cut). 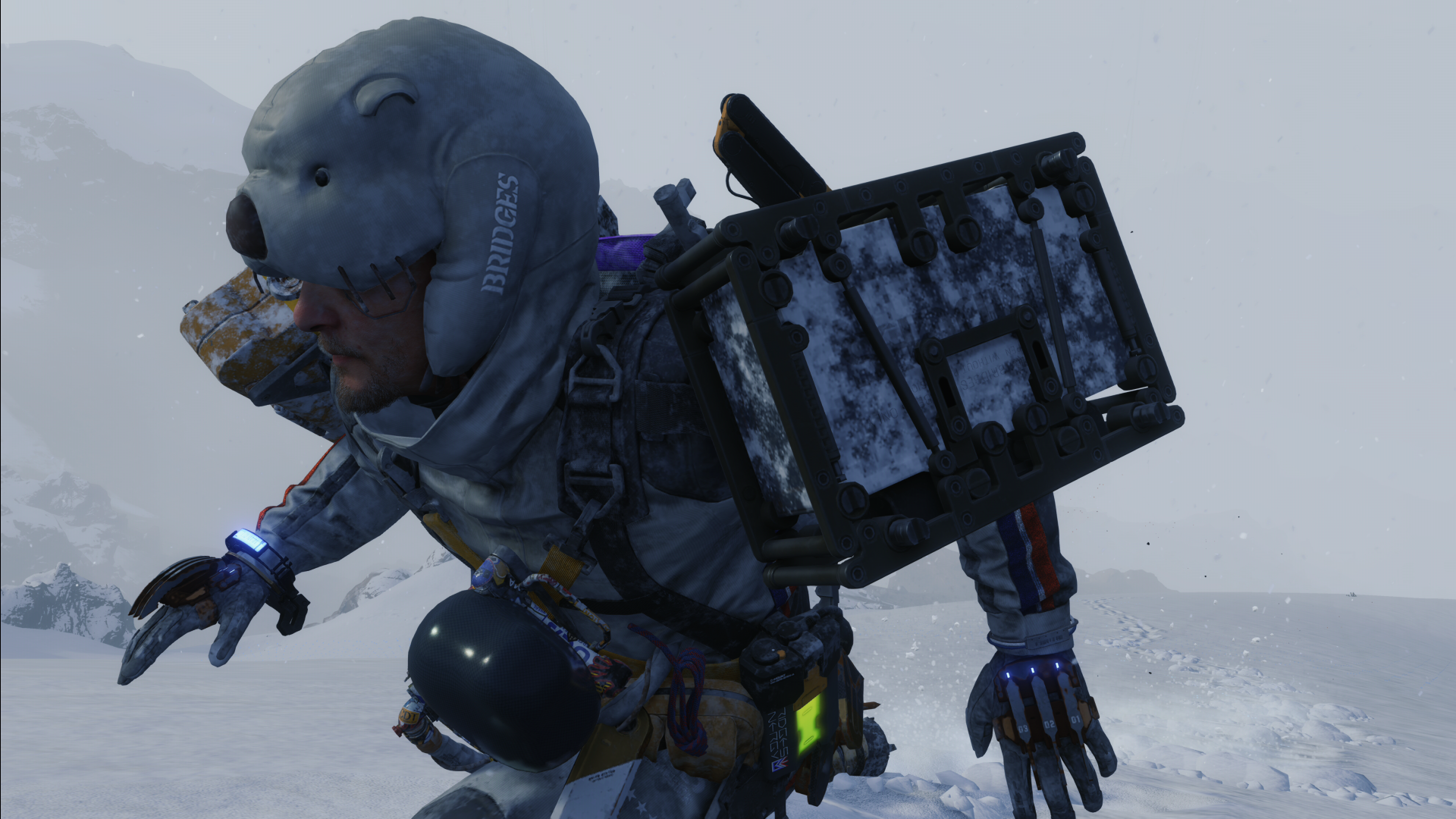 For my Death Stranding Director's Cut review experience, I started back up in Chapter 10 and found myself in the midst of some long-overdue deliveries to Mountain Knot City. Despite not having been near BB for so long, navigating rocky cliffs and ziplining about came second nature. I focused this review on how the integrations make the experience better, rather than starting fresh from the opening act. Before I even had the chance to build out the new cargo catapult on my own, there was already one greeting me outside the first major city I could come across. Loading up cartons of ceramics and metal and catapulting them hundreds of meters away became a regular part of my courier routine and a massive boon to save poor Sam’s back from having to carry all of those highway materials to far out locales. The other hugely influential change to the Director's Cut is the ability to finally take floating carriers along with you when traveling via zipline. Upon finishing up every chapter of Death Stranding and being dropped back into the postgame open world, players can venture out to the sole bit of new story content in the Director’s Cut. Played out through a series of missions that involve entering an abandoned facility in the Central Region, players are tasked with picking up a story order, venturing into the facility, and retrieving a specific piece of cargo. To extend how long these missions play out, Sam can only enter a small section of the ruins each time before returning to deliver the precious cargo and pick up the next order. Repeat this a few times to unlock the full bit of story, expanding upon some key characters of the Death Stranding lore that didn’t feel fully fleshed out and one of the best panoramic views of America once you’re finished. It’s a small bit of new content to make the story feel more whole, but is it worth picking up the Director’s Cut solely for the new Orders? I wouldn’t say so.

So, what makes the Death Stranding Director’s Cut the definitive version to play? For starters, you have access to all of the content from both the console and PC releases of Death Stranding. This includes the Cyberpunk 2077 and Half-Life themed orders, unlocking a new motorcycle and silver hand for Sam among other cosmetic goods. Every moment of Sam’s journey can be played at up to 4K resolution on PlayStation 5, from Native 4K in Quality mode or Scaled 4K with 60FPS in Performance mode. For those that want a cinematic experience, the game can be played entirely in a simulated 21:9 letterbox. On PlayStation 5, you also gain the boosts of greatly improved loading times (only a couple of seconds to jump from one region to the next via fast travel) and those DualSense features you’d see pop up in most Sony-affiliated titles: adaptive DualSense trigger controls and rumble coupled with some extra ambient sound effects from the embedded controller speaker that make the courier experience multi-sensory.

The final days of reviewing Death Stranding Director’s Cut took the servers offline and it was then that I could see the mark I left behind on America and the odd vehicle stored around in my garage. But without being online, I wouldn’t see the oxytocin of receiving likes from The Washington Post’s Gene Park or other reviewers as they took advantage of a well-placed generator or the numerous signs I’d leave to cheer fellow porters on as they return to a Knot City. This was my first time ever seeing Death Stranding without being connected online and it was a lonely, solemn experience. Once the servers arrive at launch, I’ll continue my original plan to build out a full zipline network in the snowy mountains to save other porters the same hassle of drudging through the snow step by step.

Death Stranding Director’s Cut is without a doubt the best way to step into the shoes of Sam Bridges, at least for those that haven’t seen Kojima’s vision of a ruined America. What Kojima Productions brings to the PlayStation 5 are performance and additions that make the experience play better than ever, although what’s actually new to the game feels lacking compared to what’s come in other definitive Sony collections. With all of the additions and enhancements seamlessly integrated into the Director’s Cut, there’s little reason to consider playing the first draft of Hideo Kojima’s vision if you can get your hands on this new release.

Easily the best way to experience building bridges across America, Death Stranding Director's Cut is less of the final cut one might expect from Kojima himself and moreso a collection of novel enhancements to make this the best looking and best feeling way to experience this unique title.