As you might be aware of, the Darksiders franchise was ultimately purchased by Nordic Games. As a result, Darksiders II: Deathinitive Edition was released recently on consoles in order to reignite the spark for a brand new installment.

Following the adventures of Death, a fallen half angel and one of the four horsemen, you will ride across many realms destroying the corruption to save your brother, War. It’s all a bit of a teenage boy's fantasy story that they’ll definitely write someday. The characters are quite interesting and Death himself has an amusingly dark sense of humor. Darksiders II offers a near flawless transition between horse riding and on foot, though it can be annoying to summon your horse only to find you can’t ride here on that specific spot.

Once you’ve successfully mounted your horse, Death will get to explore a bunch of interesting locations. Early levels have your character galloping around the ‘Creator’s World’, a sort of Norse world. There are ancient ruins and vast forests. Some locations feel a bit sparse, and aren’t meant to be viewed as more of a road, while others offer huge dungeons that sprawl for miles. 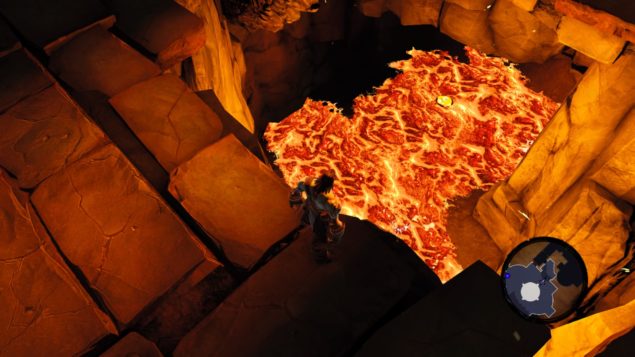 The graphics, however improved, still aren’t breath taking. Perhaps it is the gray and dark atmosphere of Darksiders II that leads to lifeless color palettes and unexciting textures, but more likely it is just the dated nature of this game. The character models are surprisingly well detailed, but the environments don’t hold nearly the same spectacle that other remastered games have recently offered. But you won’t notice this too much, as you tear through the worlds on horseback and enemies with blades.

Combat, something Death obviously gets into quite often, is typical of these third person action games. Focused on melee weaponry, you’ll use your light and heavy weapons in combination with each other while dodging enemies' attempts to counter you. There are some limited RPG elements to keep combat evolving, as you’ll learn extra moves and find new weapons and armor.

When you’re not slaughtering dozens of beasts, you’re exploring the various dungeons of many worlds. These feel like a darker reimagining of a Legend of Zelda title, with scattered chests, locked doors and bosses to overcome. You can even find dungeon maps, to help complete the locations.

Although these offer the largest part of the gameplay, navigating them can be quite frustrating. You’ll encounter many puzzles, and sections to climb and traverse the area, with little direction as to what to do. Many times Death will become unstuck when wandering between locked door and locked door, desperately trying to discover the solution. Even if you may know what to do, it can be a little awkward working out how to go ahead. An early level has a locked door, with an alternate route suspended over a lava pit; I died dozens of times attempting to cross the magma, before coming up with the actual solution.

Darksiders II offers the standard arrangement of adventure game mechanics. You might find yourself scaling across crumbling ruins, above bubbling lava, or slashing at dozens creeping monsters spawning from the shadows.

Unfortunately, what Darksiders does deliver is not original nor the best in class. Its plot may be intriguing, but as an action platformer type of game, the recent Uncharted remaster, the new Tomb Raider and even Transformers Devastation all outshine our lonely Horseman. 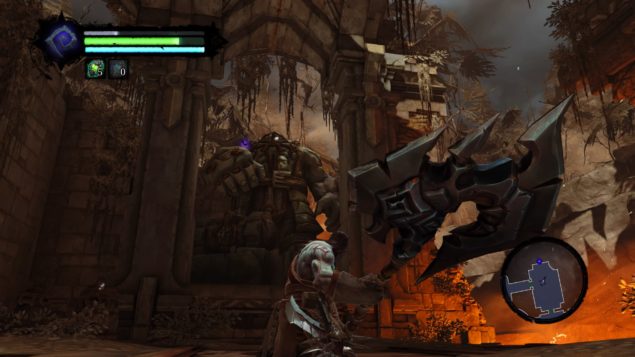 That’s not to say the game is poor. It’s a nicely polished, interesting title that still feels enjoyable, but that little cynic in your head will always be letting you know that there are better games you could be playing. The worlds you explore may be a little withered around the edges, and the combat a bit simple, but Darksiders II is by no means boring. I think it may have been a bad time to release an action adventure game such as this with so many other, more polished games games appearing on the marketplace everyday.

One of the most frustrating parts of the game, while wading through restless monsters, is the climbing. Darksiders 2 feels older than its age when you slowly crawl up the side of walls and pillars. There are clearly defined points that you can climb on, and nothing else will work. The scenery becomes an annoyance when you try and climb onto an obvious handhold, only to find that Death will not grab it. Like early Prince of Persia games, you have to find the exact path through the section; luckily the controls are tight and allow the player enough leeway to avoid awkwardly falling off.

Darksiders II Deathinitive Edition is a good game that just feels a little too weak to be released right now. Though I’m sure plenty of people will enjoy the title and its dark teenage plot line involving the four horsemen and end of mankind. The combat is a little uninspired, the graphics a little drab and the climbing a little uneven; nothing that would make the game bad or unpleasant to play, but compared to other action/adventure games on the market, it does feel a little lacking. 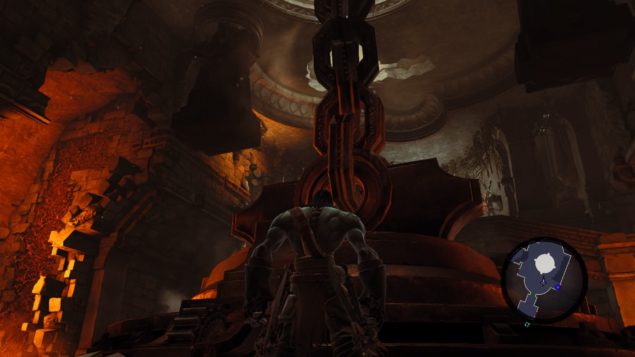 Even the music doesn’t land in that sweet spot you need to fall in love with a title. Sometimes loud, booming and a bit in your face during aggressive combat and other times quieter than a whisper leaving the world feel somewhat empty and uninteresting.

Never before have I experienced a game so okay. There is nothing wrong with this game, no reason to dislike it with any true passion, while at the same time, nothing to absolutely recommend the for. If you’ve played it before and enjoyed it, the slightly improved graphics aren’t really worth buying it again, and if you’re looking for an adventure game to sink your teeth into, there are other, better titles to start with. If you’re strap for cash, this might be worth it, but that’s about the only reason I can endorse picking up a copy.