There are two perspectives to take here; if you are the Souls lore fan, one who clamors for precious mentions of the Hollow land of Londor, then Dark Souls III's latest DLC will be an absolute gem for you. It is dripping with lore relevant characters and items, expanding the hidden details from the first Dark Souls to Dark Souls III, and it’s wonderful. If you’re a more casual Souls fan, however, then Ashes of Ariandel’s fairly short run time will leave you wanting more – even if the fights to be found within are, at least in one case, potentially the most memorable of the entire Souls series, including Bloodborne and Demon’s Souls.

Without spoilers, Ashes of Ariandel is fairly brutal – almost definitely the most punishing area in the Dark Souls III. The forlorn knights who have long since abandoned their crusade against the Abyss are here, the remainder of the Undead Legion. Wielding swords, torches and javelins, the warriors will leave you with little respite, but they’re just a taste of what’s to come in Ariandel’s small town.

Covered in what seem to be blighted and dying birds – featherless and crawling through the dirt – Ariandel is clearly in a state of rot. The painting that Ariandel is hidden away in has begun to rot, both inside and out, and this affects everything. Wandering into the small village you’re sideswiped by a monstrous crow-like beast, with fingers of Edward Scissorhands. Immediately this vicious creation leaps at you and swipes away with what seems like a nearly unlimited amount of stamina.

This is the first fight in Ashes of Ariandel that made me pause and even consider that I might be under-levelled for the DLC – he’s utterly relentless, and just a sign of the things to come. This immediately made it clear that above all, this DLC is about combat. Vicious enemies, punctuated by an even more brutal boss laying in wait.

The only real issue with the DLC area is that it’s fairly short. The diseased bird township, coupled with a brutal fight towards a tower of Millwood Knights guarded by brutal archers, is essentially the two big areas to see in Ashes of Ariandel. The rest of the DLC area is fairly standard Souls pathfinding, with arrangements of javelin throwers and archers to make you tread tentatively.

All of it, however, is made up for by an incredible final boss fight – one so memorable, so interesting, that I can’t stand to spoil even a moment of it – not even the name shall be mentioned, for it just might be a hint too much.

Another addition to The Ashes of Ariandel is the PVP arena, giving you a variety of PVP modes to jump in and enjoy from Firelink Shrine. I found the games I played to be slightly laggy, with my hits not always actually doing damage – likely because of latency issues – but for the most part very enjoyable. It feels throwaway, a fun extra, but PVP fans will adore it. 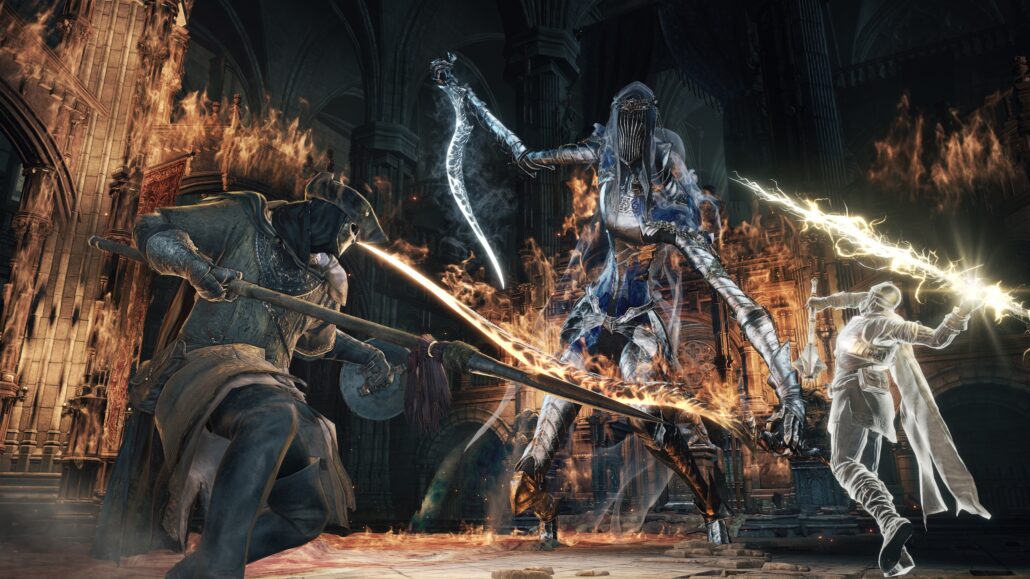 SPOILERS BEYOND THIS POINT

What’s fascinating about Ashes of Ariandel is that Gael, the man who draws you into the painting, wishes you to ignite the flame more than anything. Fans of Dark Souls lore know what’s happening here, and it’s intensely fascinating that you’ll even find a warrior of Londor here, one formerly of the Sable Church, who still keenly believes in a world without fire – ushering in the Age of Man.

Dark Souls lore gets deep and convoluted, much like time itself, and Ashes of Ariandel gives a surprising amount of screentime to exposition-heavy dialogue. Even the final boss of the DLC is preceded by one of the longest cutscenes in anticipation of a boss fight the Souls series has ever had – and that’s certainly not the last of the exposition you’ll get in the DLC.

The world of Ariandel is rotting, falling apart, like a painting left in the wind and rain, and even its creator knows that painted worlds don’t last forever, they must be cleansed by flame before a new world is painted – and the inspiration for that is flame, the same fire that you attempt to link in every Dark Souls game, in order to repeat the cycle.

It almost feels as if Ariandel, and the people that inhabit it, are adding more exposition and clarity to Dark Souls III’s toughest to earn ending, one that doesn’t simply end in linking the fire, but ushering in a new age for the people of Londor. It’s subtle, but all the talk ensuring the flame doesn’t ignite only points in one direction.

Dark Souls III’s DLC Ashes of Ariandel is a wonderful world to explore, but it’s over a bit too quickly. For some this will inevitably be a bit of a disappointment, while for others the inclusion of one of the greatest Souls bosses there ever has been will be worth the entry price alone.

The DLC is essential for die-hard fans of Souls and Souls lore, or lovers of Souls PVP. But for more casual Souls fans that just want to experience the game and don’t mind being mostly unaware of the story, it’s somewhat underwhelming.

PC version tested (code provided by the publisher). Also available on PlayStation 4 and Xbox One.

Some will be disappointed by The Ashes of Ariandel, for obvious reasons, but I relished jumping back in to a game I adore, with one of the greatest bosses of the series.