Crucial, a subsidiary of Micron is a brand known for memory and storage for over a decade, has recently released its MX 500 SSDs which I took a look at the 500GB last month and was quite impressed, so impressed in fact that it is now currently my OS drive, at least until I get an NVMe drive with say the new Phison E12, but I digress.

We asked Crucial to take a look at the 1TB model and wanted to see if performance was more or less the same if so currently priced below $175 could be an even better value than the 500GB we looked at last month. With it only being a few dollars more than the Silicon Power 1TB A55, and around the same price as the SanDisk and WD Blue drives floating on Amazon while likely being a better performer.

Much like the other Crucial MX500, we tested the 1TB model comes in a clamshell design box and features a small insert that includes the links to their support and service pages. The box is a thicker cardboard than the other products we've tested and this makes sense since this is a bit of a higher end drive.  Finally, the drive comes with a 5-year warranty, much higher than the 3 years all the other drives we've tested have come with.

Like all other drives we've tested this drive is a 7mm SSD in the 2.5 Inch form factor and includes a 9.5mm adapter which allows it to be almost entirely universal.

Not a whole lot here, just showing that TRIM is in fact enabled as well as DevSleep

Looking at the ATTO Results we see that the NVMe drive absolutely slays the other drives on the longer sequential writes though on the shorter ones are rather inconsistent, though the MX 500 drives consistently do a really solid job of maintaining very solid performance through the entire test for the best overall SATA drives. 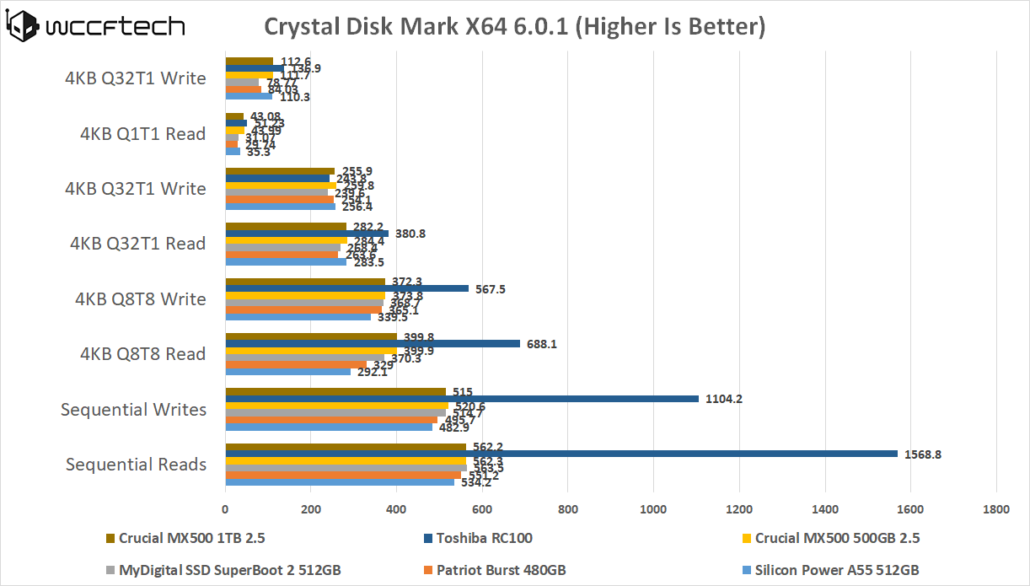 Even though we see the RC100 flying ahead, our MX500 1TB Does very well in every test shown here. An impressive showing no doubt, but par for the course based on our expectations last time.

Yet again we see consistent performance with our Crucial MX500 drives leading the SATA side of testing, though in the right workloads we can see the NVMe RC100 take a significant lead. With the poor performance by the Patriot drive at times we can see the consistency in the Crucial drives throughout the benchmarks here.

Here we see more of the same with the Crucial MX 500s both taking the lead in performance, even over the Toshiba NVMe drive which goes to show that not everything is dependent on SATA bottlenecks.

Moving on to the specific tests we see a very tight graph with some incredibly small leads, overall the Crucial drive does well yet again.

When I got this drive I expected it to perform very similarly to the 500GB I really liked last month, I was not surprised in any way, and well at it's current price point its an even better value than the 500GB was, with prices on NAND continuing to drop with every passing day these Crucial drives are a great option for strong performance from a brand that is well known and gives a great long-term warranty.  5 years is relatively long.

This time, at $175 for a 1TB MX 500 drive, and Samsungs 860 EVO now retailing for $220 at the time of writing its a $45 dollar gap, and frankly I don't know if the Samsung is so much better at that price to consider them in a similar catagory, especially when the cheapest drives are sitting at around $160-165. At the same time the 500GB MX 500 I previously reviewed is at just under $90 while the EVO 500GB is at $110. Even if Samsung is slightly better, at these prices I would give a firm recommendation to these drives due to the value per dollar which is usually a big part of how I weigh my product recommendations for the average consumer, gamer or enthusiast. The hardcore power users can and should definitely look for NVMe options that will fly past these drives, but most users won't be able to tell the difference between something like this and a Samsung 970 Pro type drive.

And with all that said I give the Crucial MX 500 1TB our best value award. 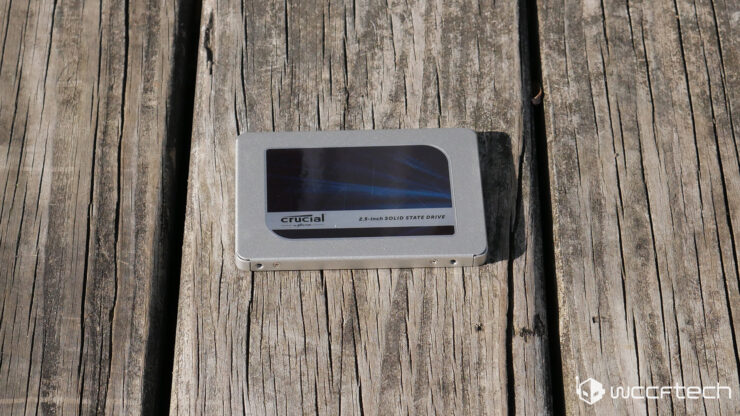 A fantastic product for the money at time of writing blows away similarly priced drives at times and is almost always the fastest in the tests. High end performance for a cheap price