Run and gun: a word whose etymology clearly begins with the Contra lineage some three decades ago. One-hit kills, twirling somersaulting jumps, and the all-powerful Spread Gun have remained constant throughout the Contra series even as the formula changes from 2D to 3D and back again. Players have had to wait for nearly a decade since the last Hard Corps title was developed by Arc System Works and even longer for titles actually developed by Konami proper. Having to go on for two console generations without a real Contra has been maddening, but Konami has answered the player’s damning cries with a complete reboot of the series with Contra: Rogue Corps.

Set a few years after the events of Contra III: The Alien Wars, Contra: Rogue Corps takes place in a partially demolished locale known as Damned City where merely being in the area is enough to make tourists go crazy. To even set forth in the city requires a certain level of personal madness to render the effects immune and that’s where the Rogue Corps comes in, four gun-toting protagonists that each are crazy in their own ways. I dare you to name another game where a woman that lives with a devil in her abdomen and a katana jammed in to keep it from taking over her body, a chaingun-wielding panda bear, gentlemanly alien, and psychotic human-cyborg hybrid are part of the regular cast. These four make up the Rogue Corps and are the only ones crazy enough to set foot in the Damned City and purge out the alien threats.

The camera angle of Contra has been turned askew and rather than any sidescroller or top-down shooter, Contra: Rogue Corps opts for an isometric take on the run-and-gun shooter. Each level consists of a linear path to run through, gunning down groups of psychotic enemies by the dozens. Checkpoints and collectibles (Damned Spirits, a golden vial that disappears after only a few brief moments) break up the action by giving the player brief objectives to undertake. By checkpoints, I’m referring to roadblocks that hinder your progress until you blow every enemy in your path away. Dying enough times to lose all of your lives during a given mission will kick you out back to the base camp and discard any money or upgrades you may have collected on your mission.

Much like its contemporaries, Contra: Rogue Corps doesn't intend to keep its players alive for very long if they aren’t careful. Rather than dying in a single hit, players are given shields that mitigate damage, but once they’re depleted, any single hit will kill the character. Even the peons that gang up on players by the dozens can obliterate a full set of shields in only a couple of brief hits. To get around this, players have an evasive dash that can clear a crowd and stun any enemy in its way (unless you’d prefer to just jump out of the way). Extra shields can be a rarity in later stages, so it’s always better to avoid getting hit, even if it means activating your special or clearing the room with a bomb instead.

Contra’s been about oversized weaponry and overbearing amounts of enemies. There’s also the lovely bit of one-hit kills for the players but more on that in a moment. Each of the four characters starts with a proficiency towards certain weaponry, whether they’re assault rifles, shotguns, chainsaws and more. By no means do you have to stick with those preferred weapon types; they’re merely a nice boost towards the early game (especially if you opt to start on Easy Mode, which contrary to the name, only makes the beginning bits easier with more experienced weapons but not much more).

Among the ten weaponry types to wield in Contra: Rogue Corps are five that are permitted for your main weapon and five for your sub weapon type. The main weapon types are your bread-and-butter: the standard shotguns, machine guns, lasers and more. Sub weapon types are a bit more diverse with flamethrowers, chainsaws and ground mines to work with. I gravitated towards using a Blade-type chainsaw for most of the campaign if only because of the insanely high damage it can produce, albeit with an overheating mechanism that burns out after just a couple seconds of holding down the trigger.

Weapons overheating in Contra: Rogue Corps are far more deadly than any fanatical cyborg or alien menace. Many of the early game weapons are such pitifully low shot capacity that you’ll barely be able to carve through a single enemy group before your weapon overheats and you’re stuck waiting for it to cool off completely before it can be used once again. Because of the two-weapon system, the player is forced to constantly swap between the two weapons constantly throughout each stage, something that can be quite difficult if you bring a drill to a chopper fight.

Each of the four character’s unique abilities can be used to augment their attacks and most provide an alternate method of attacking, whereas Miss Harakiri simply makes her attacks all the more deadly without giving her an extra spread gun or more bullets to dish out. It’s a shame that so many of the weapons have abysmal cooling and steady fire rates, because there are some really intriguing weapons that are hindered by these limitations. I ran into a Crush Gun that shot out giant devil babies and bowled through any enemies in their path but I could only fire off three or four rounds before overheating and needing to switch back to my chainsaw.

In a lot of ways, Contra: Rogue Corps reminds me of the possibilities of turning an Earth Defense Force title into a twin-stick shooter. The weapons are highly numerous and crazier than the last and the whole premise of taking on dozens of enemy forces that can easily maul you to death after a few quick hits isn’t unfamiliar to my hundreds of hours as an EDF soldier. Both titles are janky and endearing in their own ways, but Contra: Rogue Corps still lacks a certain charm that keeps that jank from being polished into a hidden gem.

Contra: Rogue Corps allows for a variety of multiplayer options and I can only truly recommend the campaign offerings. You’ll have access to both couch co-op as well as online multiplayer that runs quite well, even when a connection is tagged as only being a couple of bars of signal. During release day, I hopped into a few games with players that were just starting out and suffered no dropouts or game-ending lag spikes which is always a bonus for a multiplayer experience. There’s a limited server browser to seek out specific missions or the chapter they take part in but whether it’s connection issues or a lack of player base during the opening week, I found very few players to connect to.

Shoehorning in a competitive mode or two into your game can either be an amazing idea or something better left on the cutting room floor and lamentably Contra: Rogue Corps fits the latter description. Many of the matches I played during my review revolved around a weird perverted form of Rocket League where I engaged in a 4v4 game to shoot alien bugs and launch them into the enemy goals. In theory, this shouldn’t be that bad, maybe a mode to play once or twice and forget it even exists but if only that were the case. My given character was typically left with pistols and other under-powered weaponry in each game, seemingly limited to the character you chose, and ineffective at range or against multiple opponents. Even during matches that enabled one-hit kills for every player, I found myself on the receiving end of a bullet far more than I was able to dole out. With no way to change characters or loadouts without leaving the lobby as a whole, I was stuck with my poor choices in hopes of just finishing another round and earning enough Carnage Coins to put them to use. Those credits earned during the competitive matchmaking can be spent on unlocking new character upgrades and weapon parts, making the Carnage League a necessary evil to endure if you’re looking to kit yourself out as a complete badass.

The visual presentation to Contra: Rogue Corps won’t win any awards, save for most enemies launched into the camera or buckets of blood spilled in a non-Mortal Kombat title. Everything about the Damned City is drab and grey with the only real color to the world exists in poisonous traps, golden enemies that can drop a spread gun or two and the gallons of blood being spilled about. Perhaps the aesthetic could best be described as an early PlayStation 3 download title. The comic book-styled intro sequence isn’t anywhere to be seen in the actual gameplay and if it weren’t for those vignettes, I’d find the entire presentation to be all too forgettable. At least the action runs smooth on a Pro model PlayStation 4 to say the least.

Contra: Rogue Corps is a strange example of a franchise revival that somehow misses the mark. I enjoy twin-stick shooters, especially ones that include different weapons and persistent progression, and can usually endure even ones that could use more polish. Despite my established predisposition to view the genre favorably, Contra: Rogue Corps often left me frustrated more than feeling like a badass. There’s a glimmer of greatness hidden far down below the layers of gore and craziness, so perhaps if you have a higher tolerance than I to the negative aspects, there can be something to enjoy about Contra: Rogue Corps. 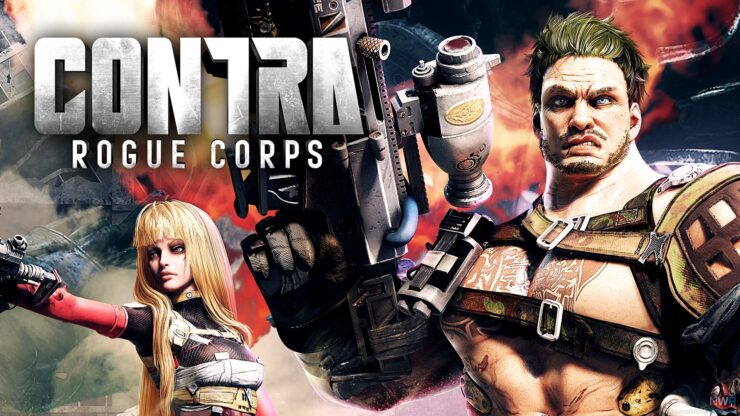 The more I played Contra: Rogue Corps, the more I could recognize its flaws yet at the same time, I was strangely transfixed by those fleeting moments of being an action badass with the right weapons, only for my dreams to be swiftly dashed as those weapons overheated and I was mobbed to death by giant alien bugs.