Cities: Skylines has been the city building game since its release March last year. It was arguably the top of the pile long before its release, announced back in 2014 partly in response to the critical failure that was SimCity. Having launched with great acclaim, though always missing certain features you just came to expect. Over time the developers at Colossal Order have had their ups and downs with the game. After Dark was well received, adding what felt like a whole new aspect to the game. Snowfall less so, adding at least some variety and a few maps, but not enough to justify the price.

Now we have Natural Disasters, one of the truly long awaited expansions to Cities: Skylines. It's long been a staple of city building games to just see your creation come crashing down, after so much hard work has gone into it. More often than not it's by your hand, calling forward the wrath of nature just to see what happens.

Every single disaster featured in this new expansion are, as the name indicates, natural. Ranging from smaller events like lightning storms, sinkholes, earthquakes and forest fires. The larger, more visually impressive disasters include such as tornadoes, tsunamis and, of course, meteors. This is Cities: Skylines - Natural Disasters, where everything you've worked hard to build will turn to ash.

What makes these work so well is the cascading effect they have, as well as the changes that have been implemented in the game to support the disasters. The game already featured cause and effect systems, such as you blocking a river with a dam would cause a buildup of water upstream and potentially cause flooding. The natural disasters DLC takes this to an even greater degree. There's little more visually impressive than seeing a meteor crash off of the coast, create a tsunami and you can see that huge wall of water heading towards your city.

Natural disasters are obviously impossible to prevent, that much is sadly true in the game as in real life. The onus then is placed upon protection and response. In line with this, the DLC features a number of new buildings based around that. The fire, ambulance and police departments all have separate helicopter depots, sending helicopters to the harder to reach or time-consuming trips. What really adds are the brand new disaster-related buildings

First and foremost is the disaster response unit, this will send out teams to any site to search for survivors, clear rubble to make a place viable for rebuilding (rather than you taking a bulldozer to it). Any survivors will be able to live in the brand new shelters while their homes are ready to be rebuilt. These shelters are keenly tied into the early warning systems you can build. Tsunami buoys, earthquake sensors, weather radars and even a deep space satellite, you want to be aware of an impending disaster and evacuate accordingly.

Of course, to evacuate your people need to be aware. This is where new broadcast towers come into effect, creating an area of coverage where people will be told to evacuate and get to shelter. They can make their way by themselves or the shelters will send our busses to collect from allocated areas - provided the traffic lets them get there. Your reward for suffering from and surviving these disasters comes in the form of new unique buildings and a new monument, the Svalbard Global Seed Vault, known in-game as the Doomsday Vault.

More vehicles on the streets obviously add extra load onto your city, but you always want your evacuation buses and other emergency services to get where they need to go. This is where the new helicopters and traffic management comes in. Colossal Order have utilized the helicopters incredibly well, there's a fine balance as to when the fire and paramedic ones will be called out (mostly to difficult to reach areas or in the case of traffic being just too heavy for the ground variants). Police helicopters, on the other hand, will patrol constantly.

Where I expect this new DLC will get the most praise isn't actually included in the DLC, but rolled out free to everybody, this being a brand new scenario editor. The DLC comes with five scenarios, but even without the DLC you have the option of loading up any game and setting a wide range of win conditions. Of course, the ability to pop down disasters at specific places and times means you can create a game with a story in itself.

This is where Cities: Skylines still shines, particularly so with the DLC. Your city is a living breathing entity and it's just very interesting to see how it reacts to certain events. Watch as the fire helicopters race to put out a forest fire, spotted by a Firewatch Tower, only for it to spread out of control and reach the city limits. The trucks respond in kind and the disaster management teams clear the rubble of buildings unable to be saved. Sometimes it's seeing the aftermath, the cleanup operations and the rebuilding effort.

Cities: Skylines is the story of a city. Only now, the city is under attack by the elements and mother nature herself.

Cities: Skylines is still by far the best modern city building game out there and the Natural Disasters DLC is a turn for the better after snowfall, but at the same time it's still just lacking enough to justify the £11 price (on the Paradox store). It's strange because I'd actually say the huge improvements made outside of the DLC and given free as part of the patch would have made it well worth the cost.

It's hard to condemn Colossal Order when they ostensibly give half of a DLC away and ask you to pay for the other half. Just for the DLC content alone: disasters, few buildings and the inclusion of choppers, it's not really worth the price. It's certainly fun, adding to and expanding on what is a fantastic game. Due to the free content, I'm more than inclined to give it some leeway since the extra content is fantastic. I can certainly recommend the DLC, but it's probably worth waiting until it's at least a third off. 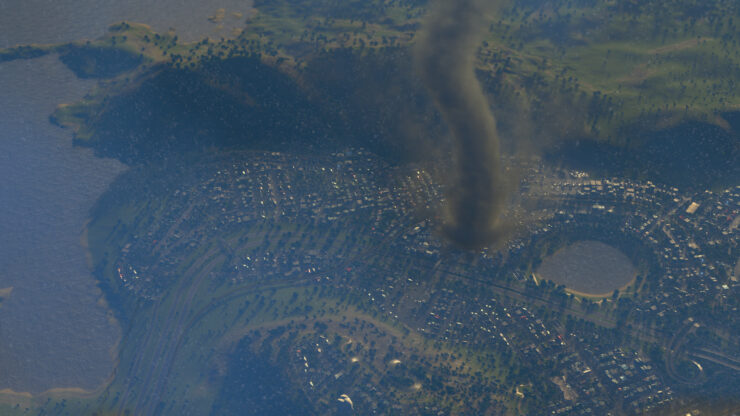 Cities: Skylines - Natural Disasters is a good, albeit slightly expensive addition to the core game. One of the huge features being given free as part of a patch detracting from the DLC seems unfair to say, but it's true nonetheless. However, the disasters add a whole new element to the game and the addition of helicopters make for a very interesting and useful expansion to your emergency services.