Square-Enix has been the father of the modern roguelike genre as we know it for some time but has always played the genre fairly safe. Starting from the likes of Dragon Quest’s portly shopkeep Torneko to the charismatic Chocobo, the roguelikes that come from Square-Enix studios are basic yet challenging enough to appeal to a wide range of gamers. It’s been quite some time since Chocobo has gone on an adventure, so it’s time to dust off the old saddle and hop back into a new adventure with Chocobo’s Mystery Dungeon: Every Buddy!

Cid and his partner Chocobo are off on another adventure before being sucked up and transported to the tiny seaside town of Lostime where citizens go about their daily lives without a silly thing like memories to keep them down. Chocobo’s hero journey will see him dive into the melancholic citizens of Lostime and restore their memories by clawing his way through randomized dungeons that won’t ever be exactly the same again. As Chocobo traverses through each dungeon, time only moves when he does. Enemies wait patiently for Chocobo to take his turn then all move at once, leading to some tactical finesse to get into or avoid combat, unless you just love being ganged up on from every direction.

If the cute designs of Chocobo and the world at large look familiar, you aren’t just seeing things. Chocobo’s Mystery Dungeon: Every Buddy! Doesn’t just look and feel like a Wii game but is largely based upon the Final Fantasy Fables line that came out a dozen years ago. Story beats between the Wii/DS title and this PS4/Switch release are identical and you can just as easily follow the same guide someone wrote on GameFAQs to guide you through this Chocobo tale. Of course, it isn’t a 1:1 remake in terms of content; dungeons have been reworked and balanced with plenty of new dungeons and classes added in. At the same time, the Pop-Up Duel card game that was present in the Wii release has been removed in a move that developers mentioned would have been too much work to balance properly. There is new voice work to the English dub, and while I wish I could say the same about the Japanese dub track, it would be impossible: there is no option for dual audio in the PlayStation 4 release of Chocobo’s Mystery Dungeon: Every Buddy!

Unique to most other roguelikes, Chocobo’s Mystery Dungeon: Every Buddy! gives Chocobo a few various hats to wear, including a couple that are exclusive to this remake, and new classes to transform into. While Chocobo’s core character level will always go up on its own, each class has to be leveled up individually by way of Job Points that will randomly drop after defeating an enemy. As Chocobo’s effectiveness in a given class goes up, new abilities will be unlocked to expand Chocobo’s tactical options. Being able to cast elemental spells as a Black Mage might go up from only targeting a single foe to blasting nearly every other enemy in the room once you’ve maxed out that job’s proficiency. It’s not just the damaging spells that are important, either. Sometimes just being able to knock an enemy away or stun them for a turn can be enough to reverse a bad position and help beat a hasty escape before Chocobo loses its life and all of the loot the player has acquired. 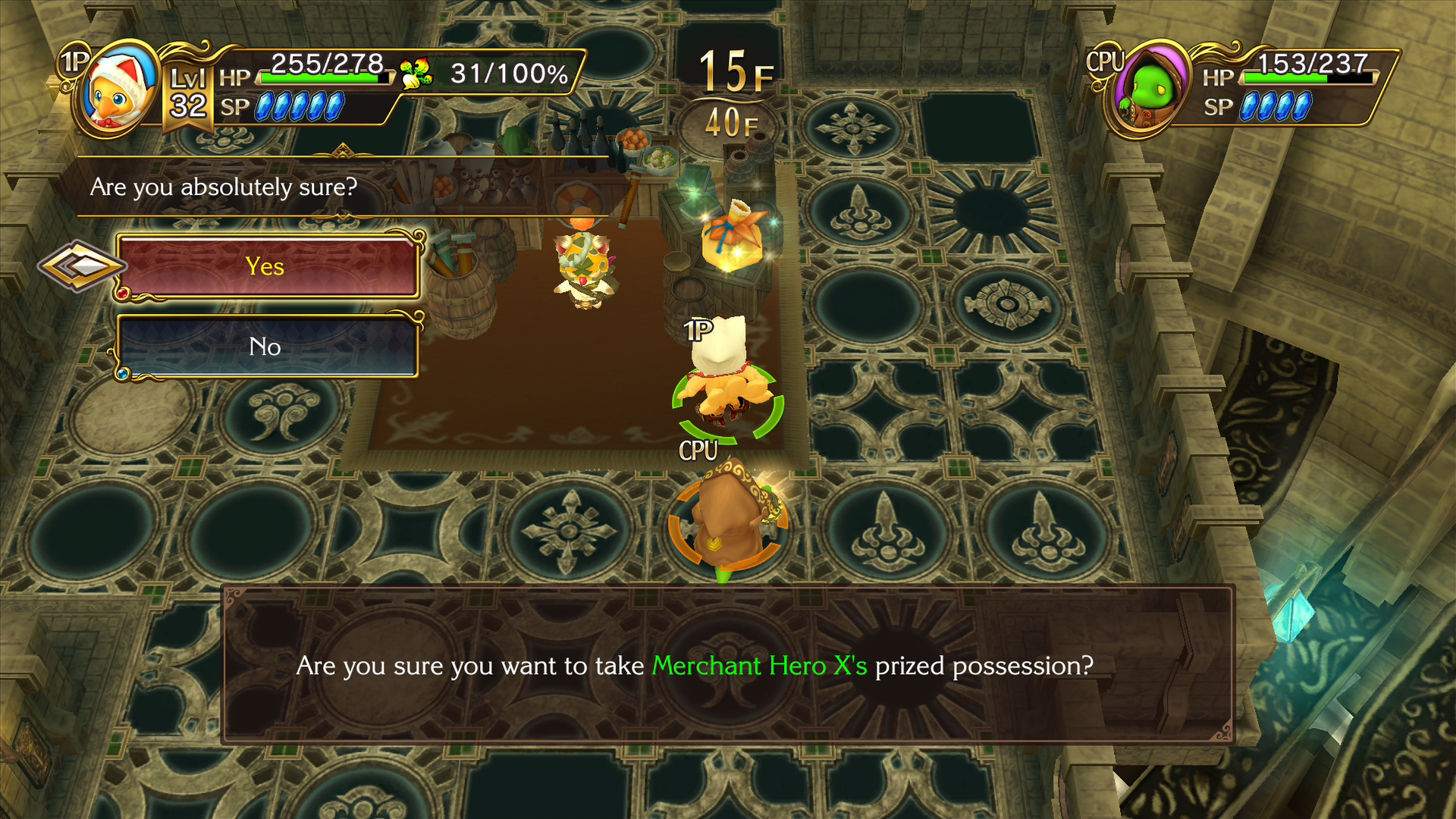 Chocobo’s Mystery Dungeon: Every Buddy! toes a delicate balance between Chocobo’s gear and progression. With every dungeon, you’ll be gaining just a little bit more experience towards a higher level, Job Points to enhance Chocobo’s hat of choice, Buddy Points to unlock new party members, and most importantly, gear to make Chocobo a greater threat. Even death simply means that you’re kicked out of the dungeon with just the saddle on your back (plus equipped weapon and accessory) but nothing can take that experience you’ve gained away. Of course, if you’re a masochist that wants to play on hard mode, the experience will be similar but with a complete loss of gear in true roguelike fashion. The few dungeons that don’t offer any goods for Chocobo to walk away with are usually one-off challenge dungeons with but a few floors to explore through but will reward the feathered friend with a new class change later on down the line.

To keep Chocobo’s potential honed, the talon and saddle (Chocobo’s preferred form of weapon and armor) should constantly be upgraded to the highest + available. Once the town blacksmith’s memories are restored, she can combine various pieces of gear to add up all of those + points onto a single piece of gear, and once a talon is filled with as many as it can hold, can sometimes further enhance a gear with another +5 points at the risk of degrading the quality if you lose. The other piece of gear that Chocobo can don are collars, each with one specific ability that you might not find on a saddle. While you might not find it until you reach the 500-floor endgame dungeon, a collar that prevents Chocobo from getting hungry might be one of the best upgrades to acquire

In addition to statistical upgrades, weapons and armor will come with brands, unique abilities that can be transferred between gear. Think of brands as materia slots, only instead of being able to cast fire, you might be immune to a particular status effect or have an additional attribute added to your attack such as an increased critical hit rate. Gear can be filled with as many brands as it has slots and the highest rarity of gear might be able to hold six or seven brands in all. One of the most essential brands early on is to get the ability to turn your gear rust-proof, preventing enemy attacks from damaging your gear and removing those important +’s that you’ve built up. Not every dungeon includes enemies that have this obnoxious ability, but when it comes time to visit the water temple, you’re going to wish you had it. Another interesting use of brands is to include one of each elemental attribute on a single piece of gear (five in total, not counting light and dark). Fusing all five onto the same piece of gear will transform it into an All brand, giving you the effectiveness of all five but with only a single slot consumed.

Choosing which buddy to bring along on Chocobo’s journey is another important part of the strategic element of Chocobo’s Mystery Dungeon. Every enemy that you best in the dungeon can be brought along as a party member, bosses included, if you gather up enough Buddy Points. Most NPC’s will also lend their talents as well, giving Chocobo nearly 150 different party members to bring along. Usually the best ones to take along are ones that can complement a deficiency in Chocobo’s abilities. If you’re a melee-focused class, bringing a lizard-type can help provide extra damage, or if you’re a class that can’t heal yourself, Shirma’s Cure spells can help in a pinch. Of course, all other buddies can’t stand a chance against the might of Bahamut once he becomes your ally, but by the time you recruit the mythical dragon, there isn’t much of a challenge that Chocobo can’t tackle on its own.

Chocobo’s Mystery Dungeon: Every Buddy! feels a bit disingenuous to call it a new adventure when Chocobo’s already ventured into the city of Lostime once before. Instead, players can expect an enhanced port that streamlines many systems while including new content and classes to scratch that roguelike itch. Every Buddy! plays it safe with the mechanics, but despite the cute appeal of Chocobo, there’s still a devilish challenge to play through. 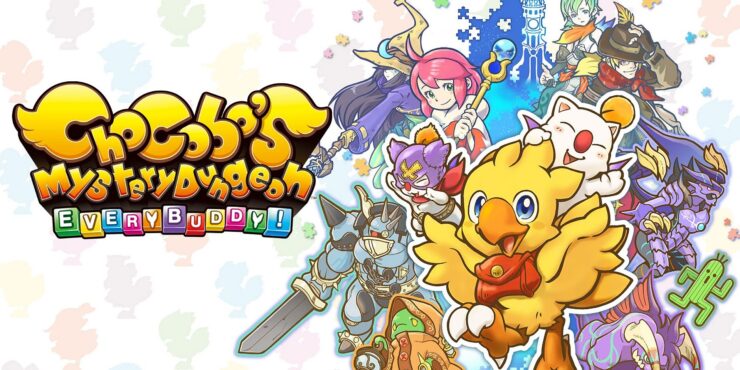 It's cute, it's colorful, it's Chocobo and you've probably already played Chocobo's Mystery Dungeon if you've owned a Wii in the past decade.