Video games do destruction all too well, but Canadian indie developer Greg Lobanov seems to have made it his mission to focus on the constructive and creative. Lobanov is following up his winsome music-focused project Wandersong with Chicory: A Colorful Tale, an innovative new Zelda-esque adventure that lets players paint literally everything in its black-and-white world while exploring topics many creative types may find hit rather close to home.

Chicory’s coloring-book world is a neat concept that ought to appeal to kids, families, and those who just have an insatiable itch to doodle, but is the end result worthy of a spot on the fridge? Or does the game try to put too much on the canvas and end up a muddy muddle? Let the art critique begin! 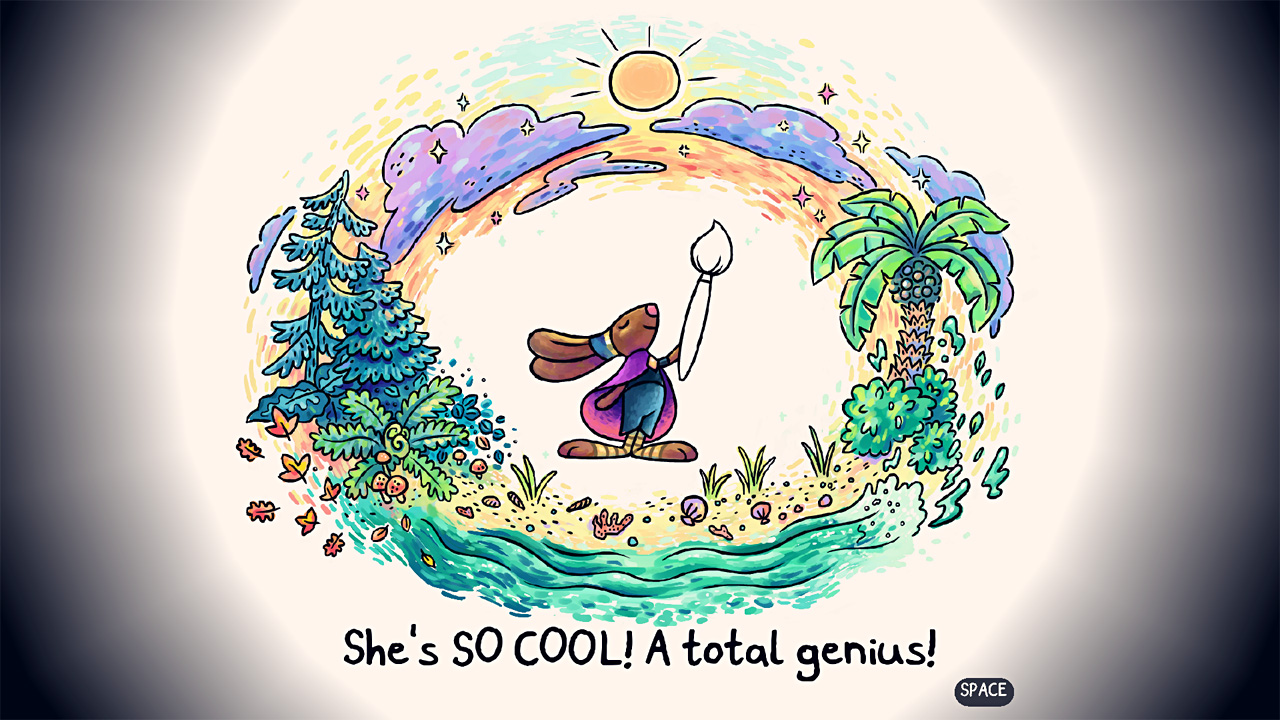 Chicory: A Colorful Tale takes place in the whimsical Picnic Province, where everything and everyone is named after edibles (answer wisely when the game asks your favorite food, because that will be your name for the game) and all the world’s colors are manually painted in by the powerful Wielder and their magic Brush. Your character dreams of being the Wielder and worships Chicory, the current holder of the Brush, but is stuck as the lowly janitor of the Wielder’s Tower at the beginning of the game. Thankfully (or perhaps not so thankfully) you get your opportunity to shine when the world is mysteriously drained of color and you find the Brush abandoned. From here, you claim the Brush and set off to re-color the world, and work through a few personal issues. 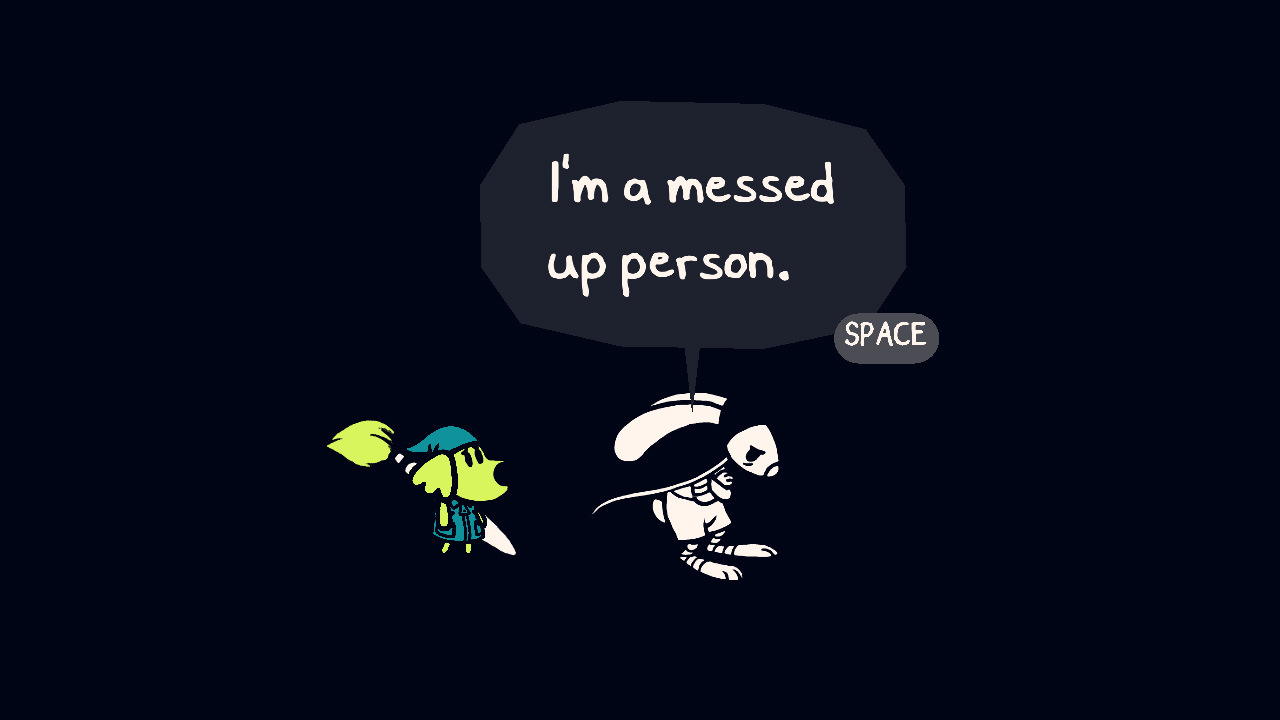 Like Wandersong before it, Chicory starts out goofy and upbeat, but darker themes and more complex motivations soon creep in around the edges of the canvas. Imposter syndrome and struggling with the weight of expectations are major themes here, as your character is desperate to prove they deserve to be Wielder, despite more-or-less lucking into the Brush, and Chicory is suffering from some pretty nasty doubts of her own. Doubts that may be tied to what’s happening in the world. Somewhat similar themes were explored in Wandersong, but they’re expressed more clearly and forcefully here. Wandersong was a touch more abstract, while Chicory uses art and the creative process as a strong metaphor for working on yourself. And hey, just in case I’m making this all sound a bit too heady, this is still a game where you can design donuts, help a preppy snake throw a party, and paint butts on anything you want. 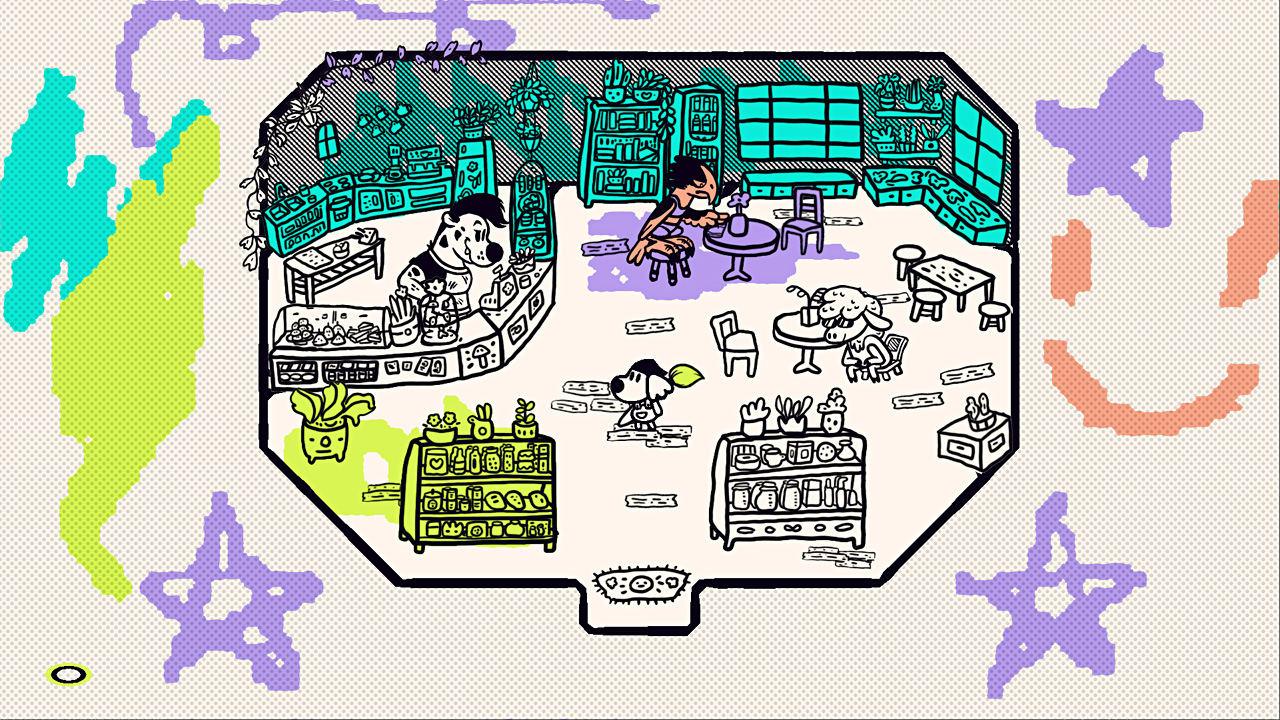 In addition to a better story, Chicory one-ups Wandersong in terms of presentation. The game’s character designs by Alexis Dean-Jones are cute as heck, and the protagonist is brought to life with a ton of fun animations -- dozing if you leave them alone or doing a little wet-dog shake when they emerge from the water. And, of course, it all looks better once you color it in. The game’s soundtrack is by Celeste composer Lena Raine, and it deserves to rake in some awards later this year. She’s working in a Zelda mode here, but with plenty of modern touches. Particularly impressive is the way the music dynamically changes, becoming more intense or heavy as events in the game ratchet up.

As for how Chicory: A Colorful Tale actually plays, you run around screen-by-screen ala classic Zelda and can paint on stuff at any time with a cursor you control independently from your character. Eventually, you’ll gain a variety of powers that will help you traverse the world, including the ability to “swim” through pain Splatoon-style, leap over gaps, and more. 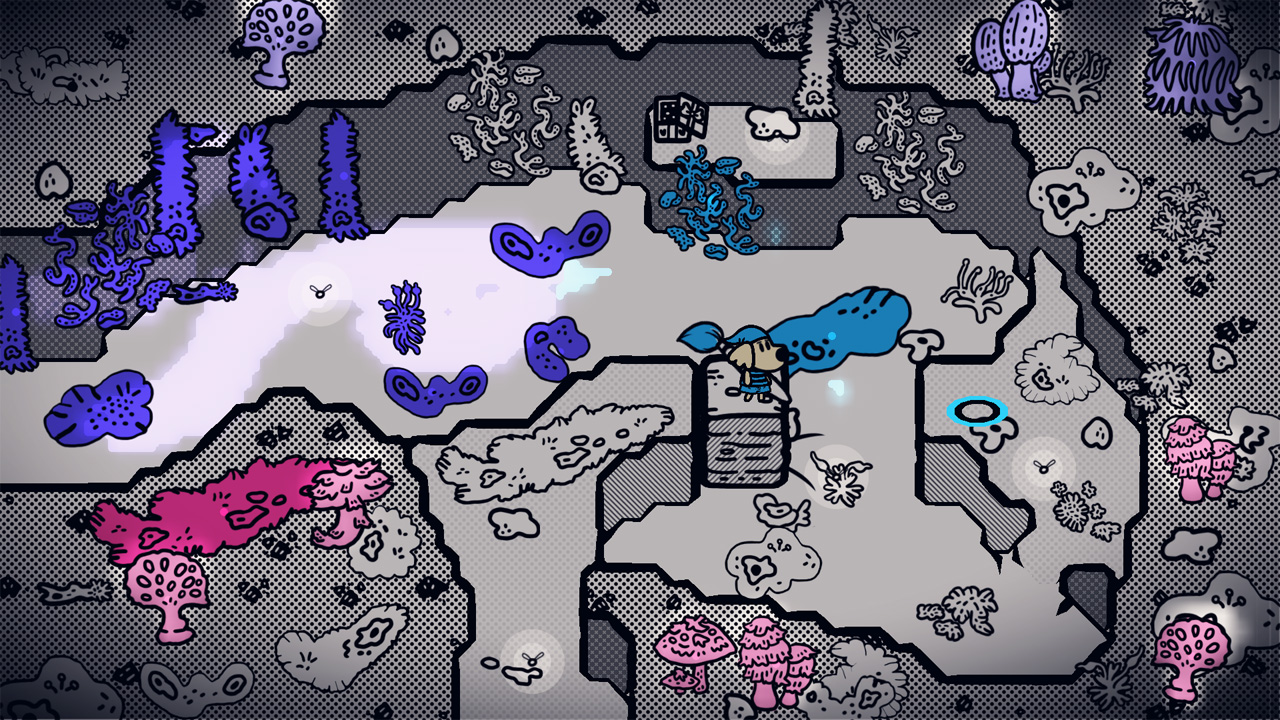 If you’re wondering how Chicory manages to combine adventuring and painting without things getting frustrating, well, it doesn’t. Not entirely. Playing with a keyboard and mouse is great for painting, but isn’t so great for some of the more exacting timing-based action stuff. Using a controller is better for the action, but makes for much less precise drawing (playing on PC I didn’t have the option of using the PlayStation touchpad for painting, but that doesn’t sound like the perfect solution either). Certain elements feel like they could have been polished a bit more – exploding globes you have to push around for certain puzzles often get stuck on things and the less said about the finicky plants you have to ride later in the game, the better. Overall, Chicory’s controls feel just a touch clunky, but this is an indie game, and its chill vibe (aside from bosses, there are no enemies in the game) means its occasional sticking points aren’t too irritating. 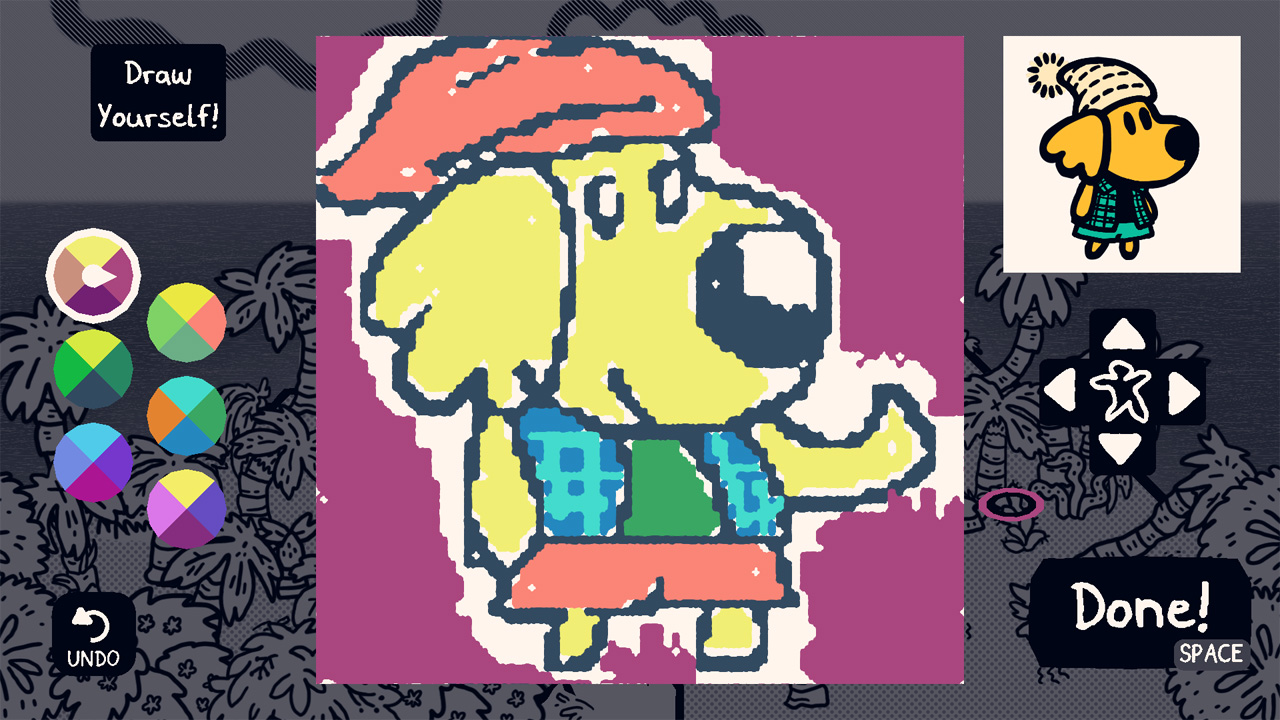 I must also admit, I wasn’t quite as entranced by Chicory’s central painting mechanic as I thought I would be. The game allows you to paint freely on large surfaces, while smaller objects are automatically colored in, and you can quickly change your brush size, type, and color with a few quick button presses. It’s all easy enough to get into, but if you’re hoping for something as advanced as even MS Paint from 25 years ago, you’re going to be disappointed. Everything just feels somewhat hand-holdy with each area only allowing a palette of four different colors (although you can eventually design your own), and hit detection is sometimes a bit wonky, making any sort of precise work difficult. Don’t get me wrong, splattering paint around provides a simple sort of satisfaction, and maybe I would have been more into it if I had played the game in co-op mode. But ultimately, even as somebody who enjoys drawing (there’s a full sketch pad beside me as I write this interview), I fairly quickly found myself passing on the superfluous doodling to focus on Chicory’s campaign. Thankfully, that campaign is very, very good.

Even if the drawing gimmick was seriously scaled back, Chicory would still be a rock-solid old-school action-adventure. The game’s overworld measures up to the best 2D Zelda games, with secrets, shortcuts, and other fun things to find around every corner. Towns bring to mind Earthbound and the best Pokemon games, featuring a wealth of wacky animal weirdos you’ll feel an immediate connection to. 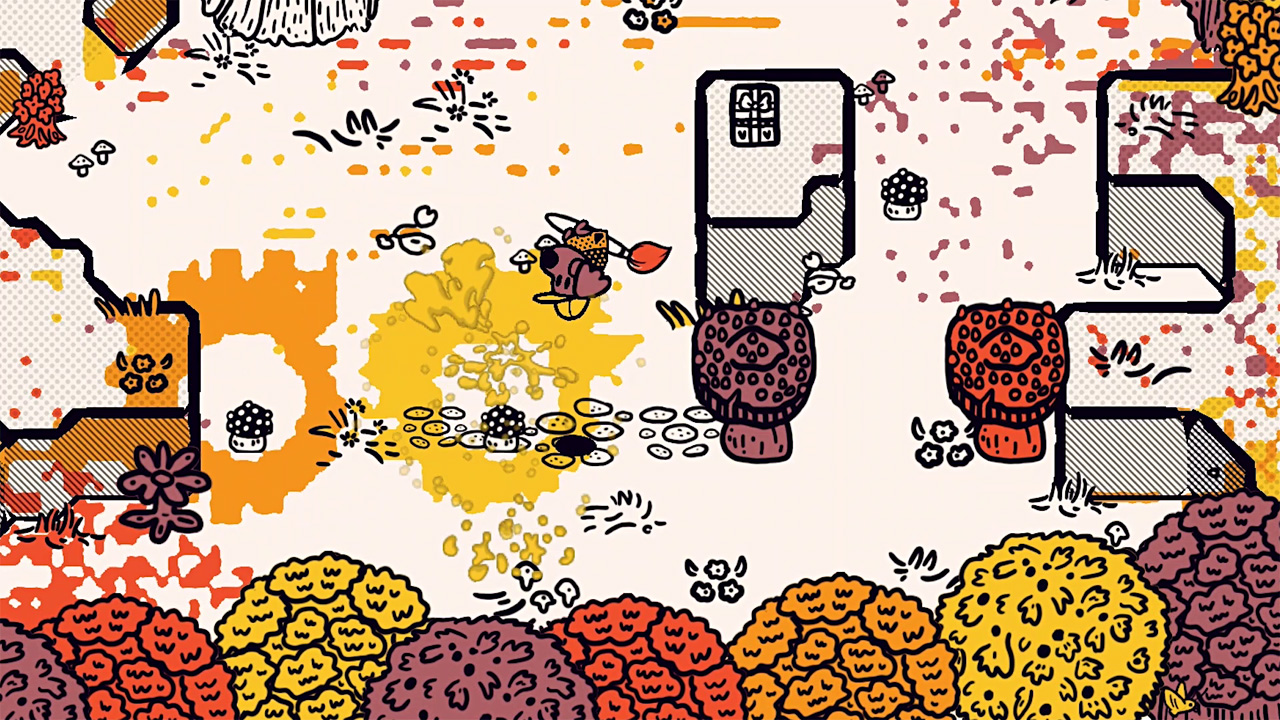 The game’s puzzles hit that perfect Zelda sweet spot, where they’re tough enough to get your grey matter percolating, but not so complex you’ll be running for a guide (and if you do get stuck, the game has a very charming and comprehensive hint system). In addition to the various Brush powers you’ll gain, you’ll come across a wide array of different elements that interact with your paint in unique ways, including plants that ricochet you across the screen, spouts of color you can surf through, and ridable bugs that follow trails of paint, just to name a few. And once you’re starting to get a bit tired of puzzles, the game will wake you up with a boss battle, some of which get surprisingly intense (although an unlimited number of lives means anybody can eventually best them).

Admittedly, not every section of the game is equally great. The first two-thirds of Chicory is almost perfectly paced, but towards the end of the campaign, the game throws a series of Wielder Trials at you, some of which don’t feel quite as polished as the rest of the game. In particular, a platforming-heavy mountain-climbing sequence feels like a lost Celeste level, and Chicory’s controls and mechanics just aren’t up to the challenge. Don’t get me wrong, these trials aren’t bad, some are quite good, they’re just not quite up to the high standard set by the rest of the game. This is still one of the best Zelda-esque adventures I’ve played in some time, and I haven’t even mentioned a ton of features, like the outfits you can collect, decorations you can place around the world, and art classes you can take. There’s a ridiculous amount of stuff packed into this game considering its dev team consisted of around half-a-dozen people. 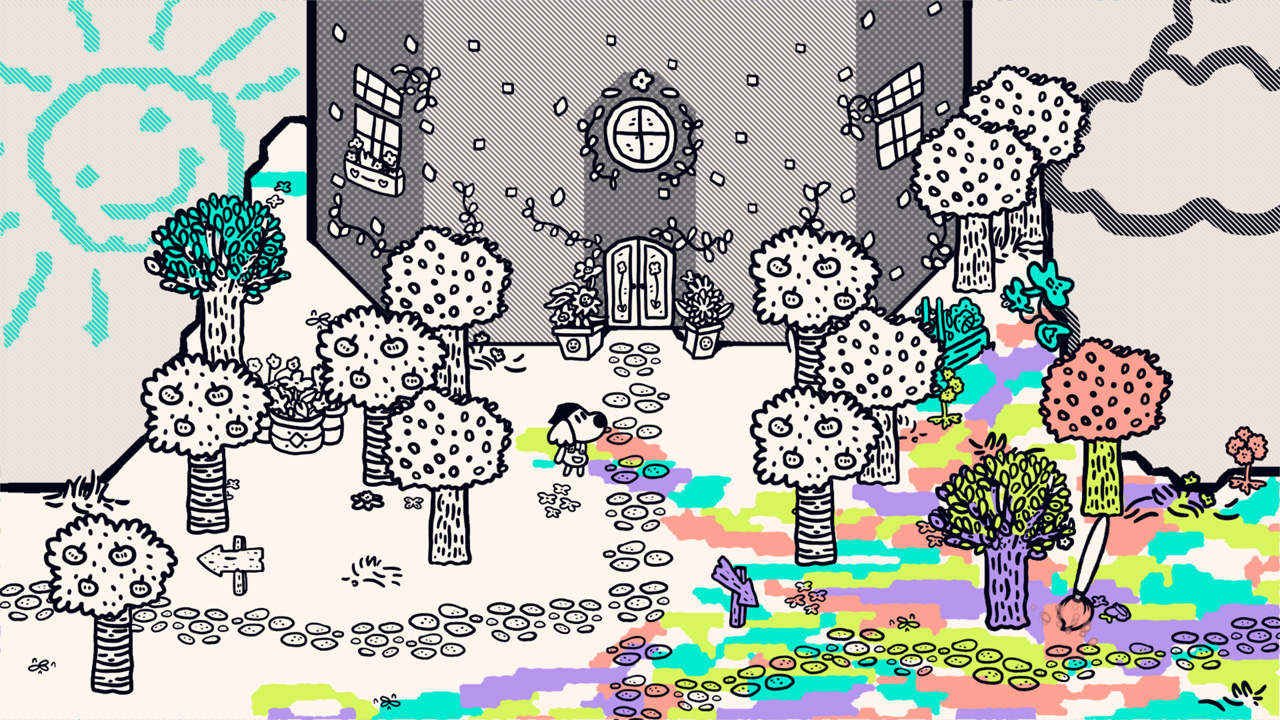 Greg Lobanov has also retained his knack for delivering a good ending. As with Wandersong before it, Chicory pulls together its threads and themes expertly for a first-pumping and ultimately uplifting finale. Chicory is one of those games you finish, sit there thinking about for a while, then immediately jump back into so you can 100 percent it. And that won’t be a quick task. This game serves up a solid 10-to-15-hour campaign and you can probably tack on at least another 10 hours if you want to collect everything. This is one painting that’s easy to get lost in.

This review was based on a PC copy of Chicory: A Colorful Tale provided by publisher Finji. You can grab a copy of the game here.

Chicory: A Colorful Tale is an ambitious, absorbing, and creative Zelda-style adventure with some meaningful, heartfelt things to say about the creative process, self-doubt, and other big issues. Like its characters, Chicory isn’t perfect – its controls can be a bit clunky and maybe its painting tools aren’t as versatile as they could be – but it’s an easy game to love. Does it fall slightly short of masterpiece status? Perhaps, but it’s still very much worth adding to your art collection.