Just as sure as the Madden Curse strikes rookie players that adorn the annualized American Football franchise, a new year brings with it another sequel in the long-running Call of Duty series. This year’s iteration is a generational shift from the last World War into something far more modern, but thankfully not too modern that jetpacks once against make their appearance. Call of Duty Black Ops IIII (military hash marks, not Roman numerals, if you’re wondering why it isn’t IV) shifts gears, dropping one pillar of the trilogy of gameplay modes and trying something new and different to set it apart from every other game Treyarch has produced. 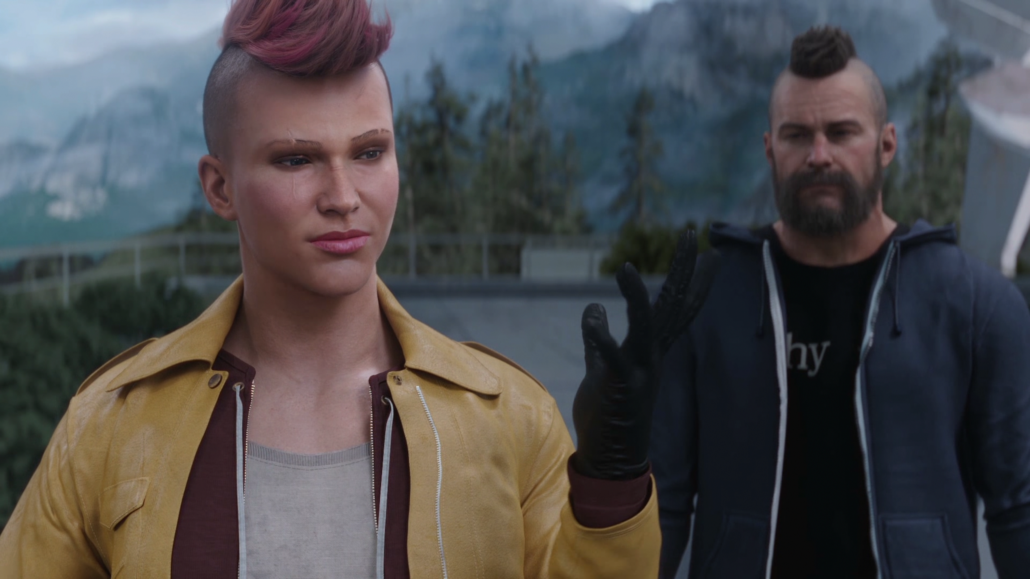 This year’s Call of Duty drops the Hollywood-style campaign that players have appreciated over the past decade and instead focuses on three pillars of multiplayer: your standard Multiplayer modes, Zombies, and the uniquely Black Ops IIII take on the burgeoning Battle Royale Genre, Blackout. In the place of a full single player experience is a training mode known as Specialist HQ, giving players the chance to play basic bot skirmishes with each operator across each multiplayer mode with brief story vignettes fleshing out each operator's motivations in taking part in a larger mission. Despite being solely single player, any online disruptions mid-match will be enough to kick you out of the match, something that happened on more than one occasion during the insanely popular launch weekend.

Operators once again return in Black Ops IIII, not locked away behind progression or level unlocks but instead are all available from the start. Battery still has her War Machine, Seraph has her Annihilator hand cannon, and most aggravating of all is Ajax’s dual setup of a 9-Bang concussion grenade that can all but guarantee an easy kill if it hits the enemy and an impenetrable riot shield/machine pistol combo. These are offered in lieu of traditional lethal/tactical equipment (which can still be taken as a class unlock if you want a traditional frag grenade and such) and run on a recharge timer, much like the readjusted healing mechanic. In all modes save for Zombies, your health doesn’t automatically recharge. Instead, the L1 button is dedicated to whatever healing you have equipped, whether it’s the standard healing shot or unlockable Stim Shot in multiplayer or bandages and trauma kits in Blackout. 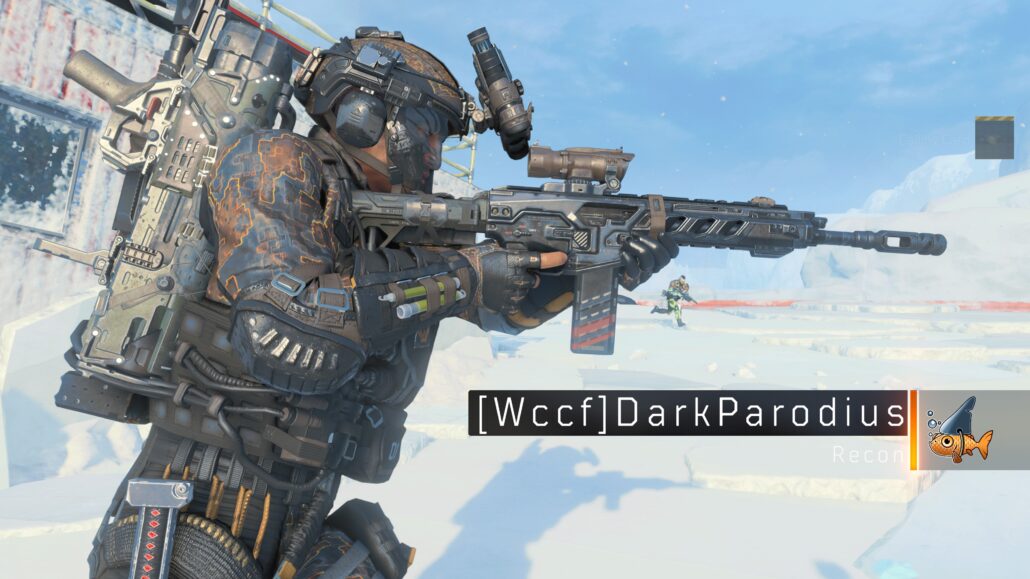 Most baffling of all the cutbacks in Call of Duty Black Ops IIII’s Multiplayer is in the gun list. Nearly all of the categories have anywhere from 3-5 weapons to work with, while others feel extremely lacking. Why only give players access to two shotguns, three pistols, and only a single launcher (not even a noob tube in the whole roster, but I fear that omission is solely due to Battery’s War Machine ability)? This is certainly a strange area to take content away from in the standard multiplayer mode, especially when there are so many unique weapons in both Zombies and Blackout to work with. Some of the primary weapons (and the Strife pistol) include unlockable Operator Mods that can drastically change the performance of a weapon for a significant edge in battle; if one shot isn’t enough with the Auger DMR, why not slot in a double tap instead? If nothing else, there are two instances of justifying the reduced weapon count in Black Ops IIII: hopefully a stronger emphasis on weapon tuning/balancing in future patches and less effort needed to get gold camo across every weapon.

Treyarch’s rendition of Zombies is the best that it’s ever been in Black Ops IIII. Players have access to not just one, but three distinctly different experiences and time periods (including the return of Nikolai and crew if you’re a long-time Black Ops Zombies fan) at launch. A fourth map is available as part of the Season Pass, but even without it, there’s enough content to keep you busy for weeks if you’re trying to hunt down all of the Easter Eggs. Between the Voyage of the Dead and IX, I found myself more drawn to the latter, a Roman Coliseum-themed battle for the gods. This one was probably the easiest to get into for newcomers as you can easily spend a dozen rounds in the starting arena farming headshots and get accustomed to the finer nuances of Zombies, including earning a Pack-a-Punch Pistol early on if you can complete enough challenges, before expanding into the map and searching for EE’s. Like all games of Zombies ultimately go, you will die and it certainly won’t be pretty, but at least you can go down swinging with three of your friends. 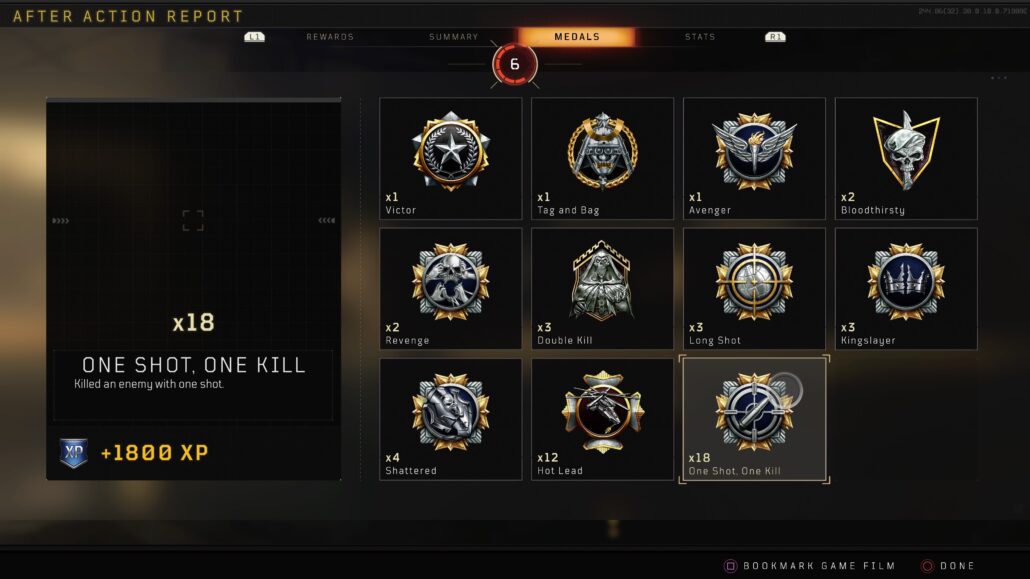 If you’re not a fan of Zombies and Team Deathmatch has too many respawns, why not hop into Black Ops IIII’s newest pillar of gaming, Blackout? Ah yes, the Battle Royale action that’s taken the world by (the eye of the) storm. Whether playing Solo, Duo, or in a group of four, drop into a massive map and scavenge for supplies and weapons to be the last one standing. Any gamer that’s at least heard of Fortnite or The Culling in the past few years already knows precisely what the mode is about and what makes it unlike anything else in the genre. With a single life in each game, there’s a sense of survival that a round of CS_Inferno can’t match. Once you drop onto the island and hit the ground running, it’s clear to see that this is one of the aspects that Treyarch focused most of their efforts in the Black Ops IIII package. 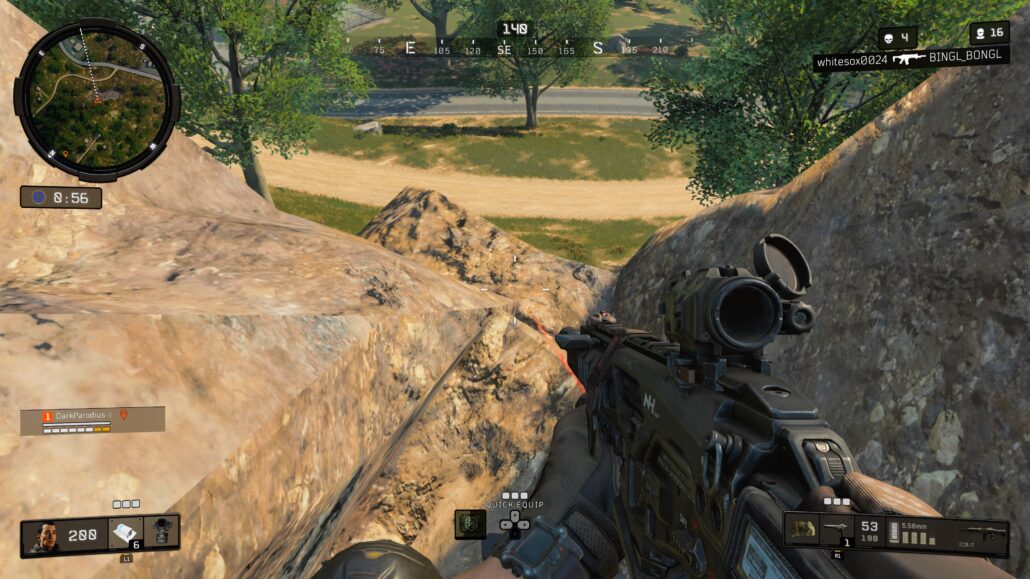 The Blackout map is much more than a desolate island with hot spots littered throughout. Many signature locations from the Black Ops series, such as the Firing Range that’s dominated by anyone with FMJ rounds, or Estates that was once featured in a previous campaign. No matter where you drop, there’s bound to be competition all scrambling for the first gun and just trying to survive. The various map hot spots have tendencies to see rare gear pop up more frequently than others, so if you’ve got a preferred playstyle, you should already know where to drop.

One thing that Blackout does that no other Battle Royale has done to date is including quests to unlock new cosmetic characters for multiplayer. Hints for how to unlock new characters are given during the intro videos to each character’s bot smash missions but gamers have already figured out how to unlock most of them through the magic of crowdsourcing. To date, I’ve only managed to unlock one new character (Ajax) just because of the combination of earning a character specific piece of loot and finishing high enough on the leaderboard can be a daunting task if you aren’t playing in a squad.

Now more than a week after launch, Treyarch has added in their Black Market version of a Battle Pass to give players a reason to keep coming back and playing day after day with every match earning a little bit more progress towards the next unlock. The first Black Market season offers two hundred tiers, each with new skins, emotes, signature weapons and other cosmetic goods to unlock and show off. It’s currently free to play through and no other micro-transactions are present in the release, but players will see the return of a cash shop come November with Blackjack’s Shop. Those that purchased the Season Pass have a temporary advantage with the first few tiers of the Black Market contraband unlocked to start, but dedicated players should have no problem ripping through all two hundred tiers before the mission expires.

As a fan of the post-modern guns rather than those that were developed for the last Great War, the setting of the later Black Ops games has consistently been one of my favorite series under the Call of Duty umbrella. Now that boots are back on the ground once more, most of the changes in Black Ops IIII can be seen as a positive. Treyarch has certainly nailed both the Zombies and Blackout experiences with an absurd amount of content, and if they can show Multiplayer the same focus and add in more variety to the weaponry and modes, players could see Call of Duty Black Ops IIII to be Treyarch’s best work since World at War.

Reviewed on PlayStation 4 Pro (code provided by the publisher). You can purchase Black Ops IIII on Amazon.

Call of Duty Black Ops IIII revitalizes the annual shooter by dropping the traditional campaign and focusing more on the cooperative multiplayer, from a trio of distinct Zombies experiences to one of the best takes on Battle Royale to date.