I'm not an established fan of Crypt of the NecroDancer, I'm a fan of The Legend of Zelda, and I knew exactly what I was getting in to. This is, first and foremost, a Crypt of the NecroDancer game. The way it plays, the way you progress, there are elements taken from Zelda, but this is a NecroDancer game. As a result, I didn't know if I would enjoy it all that much. I like rhythm games, but roguelikes are a different matter. But then the title screen music played and took me straight back to Ocarina of Time on the Nintendo 64. Nostalgia is a powerful thing. From that first moment, the developers made clear that they are Zelda fans too, and they know what Zelda fans want.

Cadence of Hyrule is a Crypt of the NecroDancer spin-off featuring music, areas, enemies, mechanics, items and more elements from The Legend of Zelda. Both games have great music and deep dungeons to explore, so it only makes sense, and this crossover is a match made in heaven. Skipping around Hyrule to classic Zelda tunes is wonderful, and is basically what I'm doing in my head whenever I play a Zelda game anyway.

The story is pretty rote, with a villain invading the land, Cadence getting dropped in mystically from the Crypt of the NecroDancer dimension, and hiring either Link or Zelda to help her collect instruments are return peace to the land. The fact is, the story here really isn't important, it's just there to facilitate that amazing, grid-hopping gameplay, set to catchy Zelda music. And exploring Hyrule through that medium is a surprisingly fun, yet familiar experience, despite how different things actually are.

Hyrule is split up into a grid, and you'll be hopping around each map segment, killing enemies to the beat, stacking up a nice beat multiplier as you go. Once all of the enemies from any given map segment are eliminated, the music chills out and you can move at your own pace. Though, you'll probably already be trained to hop to the beat anyway. Map segments have semi-random layouts on replays of the game, yet they all manage to still feel like a piece of the map from A Link to the Past thanks to the strong art style and music. Even classic areas like the Lost Woods and Kakariko Village have been recreated and implemented wonderfully.

As you explore Cadence of Hyrule you'll find dungeons to delve into, secrets staircases, treasure chests, cracked walls asking for a bomb, and of course dozens of enemies. All of these elements are just classic Zelda, and the fact that they work so well in this format is proof of both the passion of the developers and the versatility of the Zelda formula. There are loads of items to find and use to explore the land further, such as the Hookshot, Hover Boots, Shovels and a decent variety of weapons, but many of those will be taken away from you on death.

Luckily you do get a fair few items you keep with you, and precious diamonds will stick with you, allowing you to buy better loot on your next run. That's good because if you're like me, you'll be dying pretty often. Like I said, I haven't played much Crypt of the NecroDancer, and damn, that game is pretty hard. Once you get the hang of the beat and have some decent weapons, things get a lot easier, but death will still come for you, as it does us all. Still, progress happens at a pretty decent rate, and you'll come across the dungeons and items you need to progress as you fill out your map.

The combat, of course, follows the beat, and you'll quickly get used to enemies. Each enemy has its own movement and attack pattern, and with some memorization and skill, you can predict every movement an enemy will make, outpace them, dodge every attack, and deal damage. This can be simple for early enemies, but as Lynels and Darknuts get involved, the challenge jumps pretty rapidly.

Cadence of Hyrule even has local co-op, which I found to be absolutely incredible. You can play with a friend, hop around, and play through the game in its entirety. It feels a bit strange in local co-op, and of course, your friend might miss beats and put you at a disadvantage, but since you have separate health bars, having someone help can only really be positive. 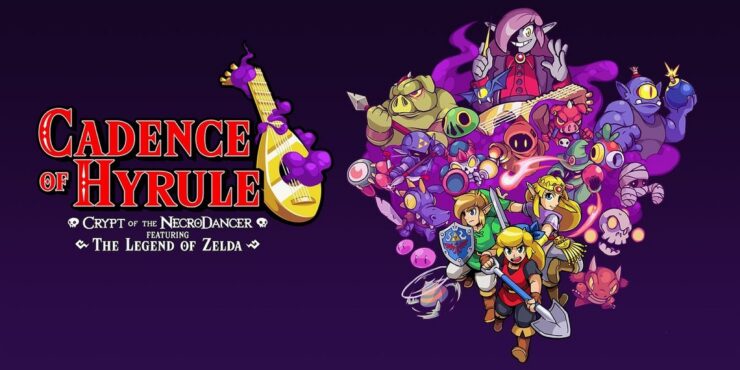 Cadence of Hyrule ends up being a shocking blend of a rhythm game, action game, puzzle game, dungeon crawler, and roguelike, all in one. It's actually pretty stunning how well the developers have managed to blend all of these elements together and still come out with a cohesive and refined experience. The game looks amazing, plays marvelously, and the music is not only the most important part, but it's the part that delivers the best. The Crypt of the NecroDancer formula isn't for everyone, but this game is borderline unmissable.