Bulletstorm was first released back in 2011 as somewhat of a palette cleanser from the self-serious first-person and cover-based shooters with its own brand of raunchy humor and over-the-top violence.

Bulletstorm even took a shot and lampooned the dramatic Halo 3 diorama trailer with their equally "dramatic' trailer featuring projectile vomit and hot dogs.

Sadly, despite it being a fun and silly curse-word filled-adventure, the sales didn't reflect that and Bulletstorm simply drifted away from memory. It was a surprise to see Bulletstorm: Full Clip Edition materializes essentially out of nowhere with Gearbox Software taking up the publisher role for People Can Fly's crazy mutant kicking shooter.

You play as Grayson Hunt, the drunken leader of an elite group of Special Force unit turned pirate scoundrels called Dead Echo. Hunt has a ten-year obsession of taking revenge on the ludicrously evil General Serrano who made the Dead Echo fugitives from the law. After a not-so-successful suicide mission, Grayson and team find themselves trapped on a resort planet filled with soldiers, mutants, and plenty of tools of mayhem at your disposal. 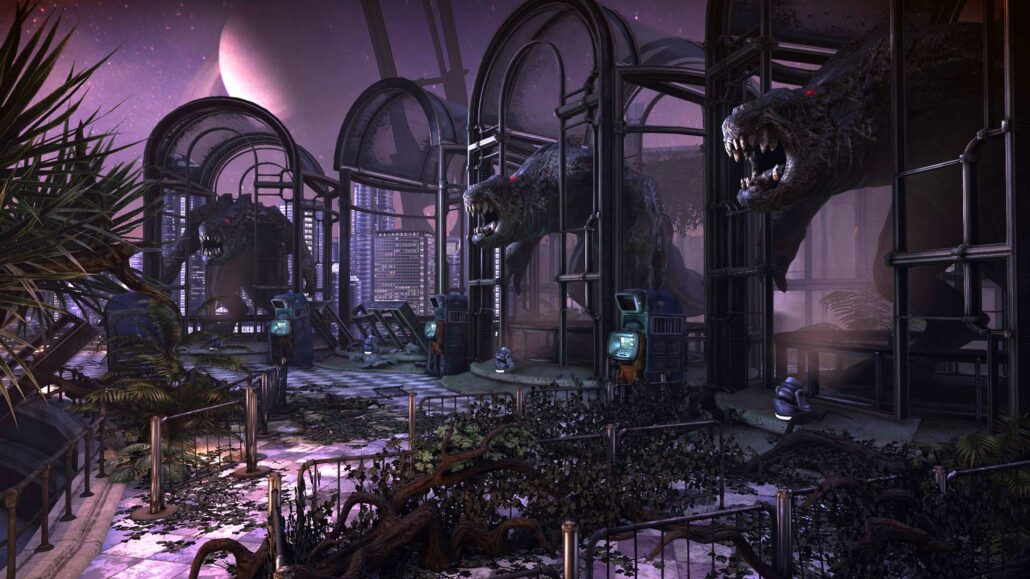 Such tools include a versatile energy whip and a fantastically overpowered boot that lets you kick opponents into a slo-mo stasis field. When the enemies are this state, you're encouraged to find creative ways to murder them. This is referred as the Skillshot system. The more insane the kill, the more points you get to upgrade your weapons and purchase more ammo.

You can also use your whip to launch enemies into the many of Planet Stygia's conveniently places deathtraps. One set up could be kicking a guy into the air, setting him on fire, and launching him into a spike wall. My personal favorite has been slide kicking mutants into the air firing the Screamer's charge weapons which fire off a Roman Candle into their butts resulting in a huge explosion.

The real joy and challenge are trying to cross off every different Skill Shot for each weapon. You could pay the game like a straight through and choose not to engage with the Skillshot system but half of the fun is looking at te environment and figuring out what sort of chaos you cause.

Bulletstorm moves at a pretty brisk pace. The five to six hours and get through a variety of really insane stages and giant fights. You'll go from being chased by the 10-story MurderWheel while fending off mutant buggies with your Gatling gun to controlling your very own animatronic Godzilla-knockoff as you fight your way out of an abandoned themed park. The action is relentless is never seems to overstay its welcome. 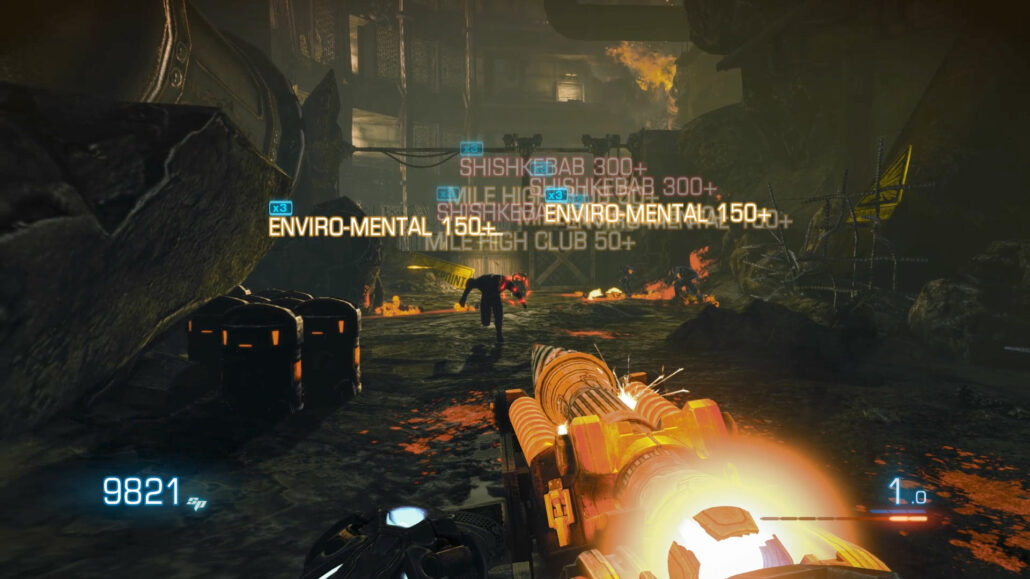 Bulletstorm earns its Mature rated with a cornucopia of swear words and comically gruesome violence. This is definitely a game you don't want a small child seeing or hearing especially when the main villain, General Serrano, enters a scene. He's best to described as a cross between the drill sergeant from Full Metal Jacket and a terrible high school gym teacher. The deluge of terrible insults that get hurled your way will generally make you giggle with just how ridiculous they are willing to go with some curse word combinations.

If your threshold for dick jokes and slapstick humor (ie rockets in the butt) is low, you probably won't have a good time with Bulletstorm: Full Clip Edition. The writing still feels like a bit dated and you really need to be all-in on the bro-tastic humor from the beginning to really enjoy what you're about to get into.

That's not to say that Bulletstorm's writing is all bad. The world-building that's done that slowly explains how Stygia went from being a 4-star resort planet to a den horrible mutants and monsters made me want to know more about the planet and the current state of the galaxy these characters all hail from.

I also really enjoyed seeing how your squadmate Ishi (who became cyborg due to your negligence) struggles with retaining his humanity against the AI bits inside his trying to gain full control of his mind and body. There are times where Bulletstorm could take a minute and have thoughtful character moment that but usually those moments are filled with someone threating to cut off your penis. 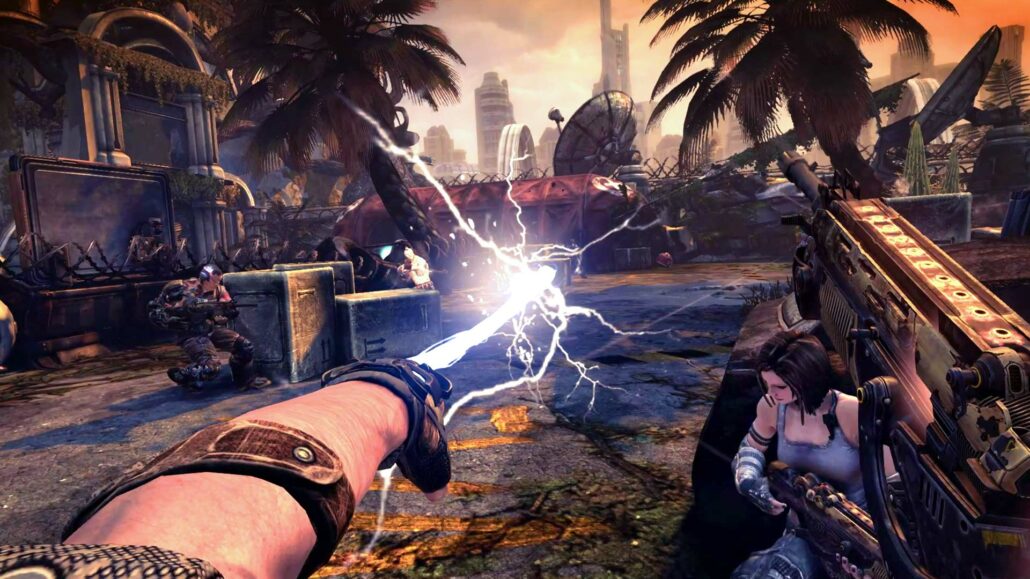 If you already played through Bulletstorm back in 2011, you won't find much reason to return. The game still ends with a rather unsatisfying cliffhanger and new Echo Maps really don't anything special that justifies paying full retail price. While playing in 4K with an upped framerate is nice, it really doesn't feel like a good value. I guess you can make the case for plenty remasters of games released during the HD-era.

The Full Clip Edition boasts some new visual and performance improvements along with new mode and maps:

Anyone who pre-ordered Bulletstorm: Full Clip Edition can play the full campaign as Duke Nukem. Duke is basically inserting into the game completely replacing Grayson Hunt along with some new dialogue. Nukem's lines are done by Jon St. John (THE voice of Duke Nukem) and wow, are they bad. The writing is just a series of one-liners delivered with an almost bored tone of voice. The worst part is if you didn't pre-order this DLC was available for $4.99. If you do decide to pick up the Full Clip Edition, do yourself a favor and skip on picking up the Duke Nukem DLC.

Bulletstorm: Full Clip Edition is a fun violent prance through fields of f-bombs and shooting dudes in the crotch that still makes me upset that there isn't a Bulletstorm 2 in the works. If you've never played Bulletstorm then the Full Clip Edition is definitely worth a look when if you want your shooters to contain challenging, yet rewarding gunplay whose story is simple, silly and completely out its mind.

Reviewed on PC (code provided by the publisher). You can buy it for PlayStation 4 (physical copy), Xbox One (physical or digital copy) and PC (digital copy) via Amazon.

Bulletstorm is back and it is still as ridiculous as you remember. The Skillshot System provides an awesome challenge for FPS players who want something a little different than your typical military shooter.