Bravely Default 2 is a JRPG where a ragtag team of ruffians and royalties work together to overcome a great calamity in the form of a natural disaster and power greedy villains. It features fantastic towns, labyrinthine dungeons and a huge overworld. Controlling the game is about perfectly balancing your team with equipment, and abilities, and utilising the turn-based combat to deal the most damage to the many monsters of the world while taking as little as possible. Bravely Default 2 is a lot of fun, but it is exactly what you would expect.

Bravely Default 2 is perhaps the best example of the JRPG genre, its stereotypes, and its storytelling. Everything you come across feels familiar: every twist in the story is something experienced before and every power-up and item and class feels structured on the classic designs that made this genre so popular in the 90s and 00s. The characters especially feel like the archetypal JRPG heroes. They are charming and cheeky, unwavering, misfits, and instantly likable. You want to spend time with them. And while all this isn’t a bad thing, it's not exactly overwhelmingly positive either.

This is a game to curl up with your Switch and play in a big fluffy blanket and would have been the perfect game to enjoy over the cold, wet, and lonely winter we’ve all endured. But there such a thing as too comfortable, too complacent. Bravely Default 2 feels like it wants its players to be warm and safe and unprovoked, but its audience might be reaching for something new, something surprising, and Bravely Default 2 is not that. It is safe, even if it tried not to be.

Bravely Default 2 isn’t a bad game, but it is heart-breaking. Not because it feels so safe, but because you can tell while you play it that it was trying so hard to be different. It constantly pushes against the edges of the box it has consigned itself to, but it never breaks free. You’ll notice it start away in the bumbling Australian villain Dag. An accent you rarely hear in games and offers a moment of refreshment before you realise he is the same comedic foil you’ve seen in thousand others.

The Bravely Default 2 Combat system is one of the game's biggest breaks from the norm. With it you can take multiple turns at once, paying them back in missed turns later. It's supposed to add another tactical layer to the game, as you have to juggle the risk and reward of unleashing an onslaught on your foes and hoping they don’t survive to retaliate. Or you could gamble a massive round of healing and buffs and hope that the enemies don’t throw in too much damage or any status effects for a few turns. That is how it is meant to operate, but you rarely need to weigh up the consequences in that regard. 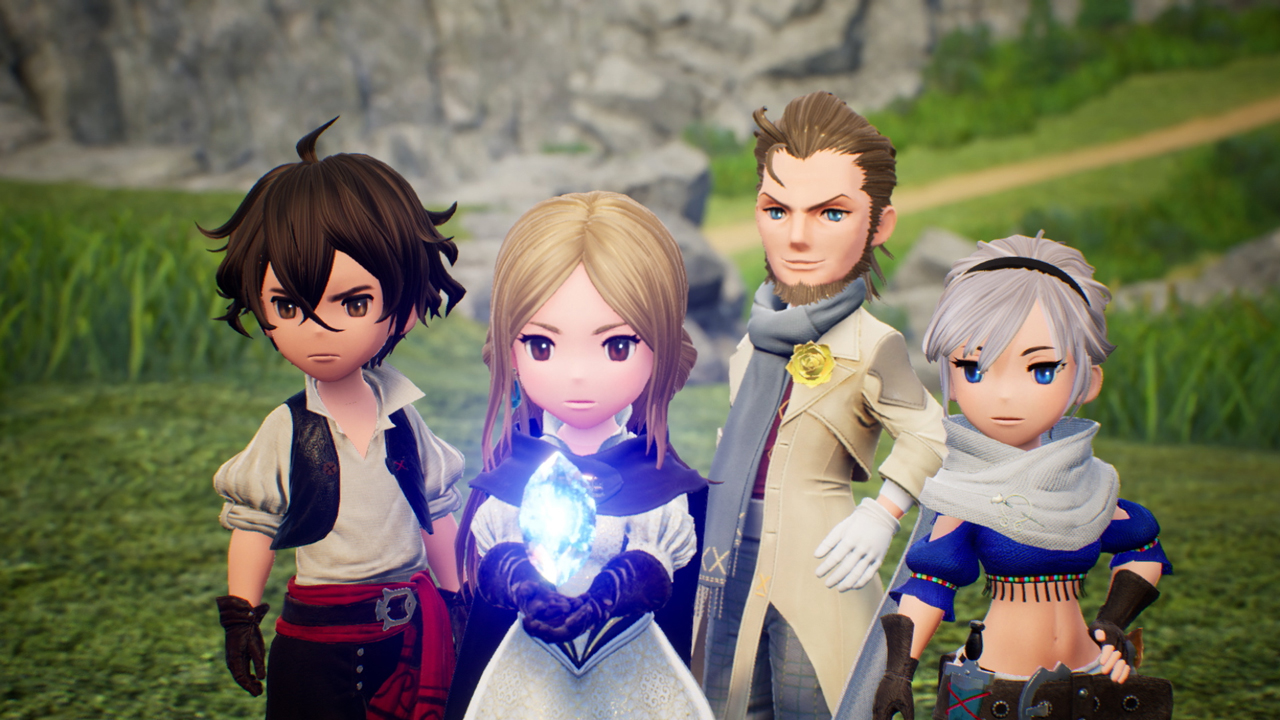 Most regular encounters can be won in the first round by having your team use all available actions to rush the opponents. It's nice to be able to speed through the less than interesting fights but since you’ll be in a comfortable position for most of the game you won’t actually need to grind much and this quicker combat doesn’t actually benefit anyone. During boss fights, you’ll learn quickly to save your turns and play ‘normally’, or use the occasional extra action sparingly when the situation calls for it. Sacrificing all your turns against a boss tends to mean you just watch it rip through your team for several turns. While a massive heal or huge damage is tempting at first, you can find that you have a lot more control over the action if you take several smaller turns.

But again, none of this is bad per se. It's still a lot of fun to delve into the mechanics of game and balance your offensive and defensive abilities in the heat of combat. The enemy types are very varied and the system of resistances and weaknesses means you’ll be utilising your whole team as you explore and fight. It's just very similar to every other turn-based JRPG you’ve played.

The other big aspect of Bravely Default is the class system that allows you to swap out your character's class freely. Once again it is a nice idea that sadly doesn’t see much use. While you’ll pour over any new class you get, the designs and benefits are all familiar to fans of the genre.

Bravely Default 2 makes you feel too comfortable, from the cosy design, beautiful music, and gentle storytelling, to the combat and deep mechanics you’d expected from the game. You can spend hours wandering through the world or the menus and have a great time doing it. You can experiment with the combat and classes and have a lot of fun building the perfect team.

But at the end of it all, you won’t feel like you’ve experienced anything new. If that is what you’re looking for, then Bravely Default 2 might be your game of the year. But while there is a lot of fun to be had with the games, players that need something fresh will come away feeling cosy and disappointed. Everyone in the middle where they can indulge in their comforts and don’t need anything too experimental will have a fun time - Bravely Default 2 is a fun game - but overall a forgettable experience.

Bravely Default 2 is a comfortable game in an uncomfortable season. It offers a well-refined experience with a few exciting elements but doesn't quite grasp the experimental or groundbreaking design it was shooting for.