Bluetooth devices have long been in our lives and bluetooth wireless headsets are no exception. From the glory days of Ericsson's bluetooth headsets, which made you look like from an episode of Star Trek to the sleek and rugged wireless headsets these days. Today, under review is a product which has actually take the world by storm and is gaining market respect and popularity quicker than any other brand. We are presenting the review of BlueAnt's T1 BT headset, aka The Rugged Bluetooth Headset. It is also the first handset to feature BlueAnt's very own "Wind Armored Technology" which allows the headset to withstand winds up to 35kmph (Read on to know the test results and you will be surprised)

When I opened the package, I was expecting a standard cardboard box with a smaller box within but I was surprised to see a very stylish oval shaped box with the headset firmly placed on a strong support displaying its unique and rugged looks. It did look to me something from Knight Rider but then again, in this age of technology, looks do matter as well.

Upon further probing I was happy with the amount of accessories accompanying this headset, which are: 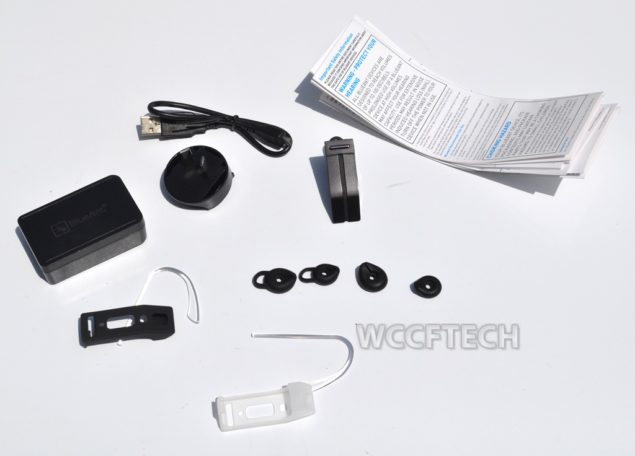 1. One BlueTooth Wireless Headset
2. Travel Charger with changeable connector (the default is European Connector)
3. USB Charging cable (which works with supplied charger and your PC)
4. 6 Changeable ear phone covers (silicon rubber)
5. 2 Silicon Protective Sleeves (Black and Clear White)
6. Detachable Ear hook (I did not like it as it was more like a plastic hook with no appeal to it)
7. Booklets and warranty cards

All accessories are packed within a neat plastic container so to keep them from getting lost once the box is opened.

The BlueAnt T1 headset is what it says it is, Rugged. With a design right out of a Sci-Fi flick, I absolutely loved the way it looks. The BT headset has a number of buttons on it but they all are there for a reason.

For power operation, the on/off switch is on the inside bottom of the headset, right next to the earpiece.

There are two volume buttons, big enough for anyone not to miss them while increasing or reducing the volume. The call answer button is on the outside of the headset and it is also big enough to easily answer the incoming calls by gently pressing it. 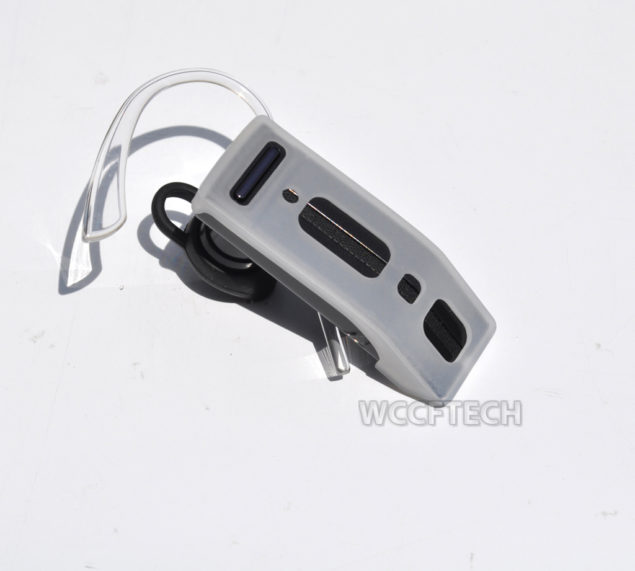 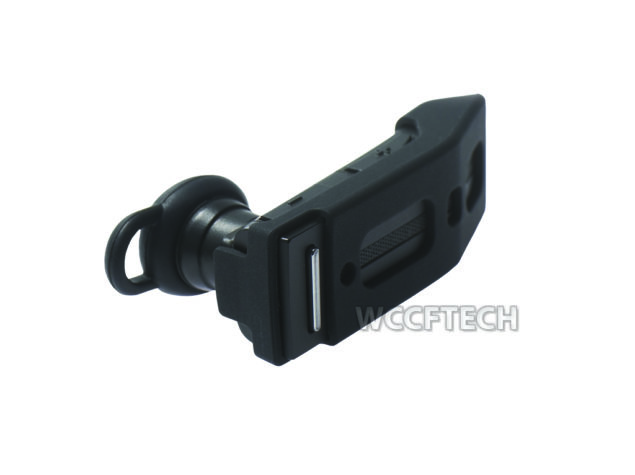 As mentioned earlier, the T1 headset comes with 2 silicon covers for protection from dust, dents and accidental falls but in addition to this, it also gives a sleek look to the headset as well. I would give an additional point to BlueAnt to come up with such a brilliant idea.

The T1 also boast an excellent dual connectivity mode, in which, you can connect 2 phones simultaneously with the headset and the one ringing first will be answered through it.

For the Navigation enthusiasts, T1 offers voice navigation right from your phone to the headset. This feature is application enabled so since I did not have any voice navigation available in my region, I could not test it.

Setting up the T1 was a breeze. I tested it on HTC Desire, an Android based handset. As soon as I switched it one, I heard a voice. It was the voice guided setup of the headset which is run as soon as the headset is turned on for the first time or pairing with any new device. The setup guides you step by step on how to connect the BlueAnt T1 BT headset to your phone. Of course I did not need to know how to set it up but for those who don't know, it is an excellent feature of the headset. After the headset was setup, I was informed, by the mysterious voice from the headset that it was attempting to copy contacts from my phone. Now I really appreciate this feature but then again, there should be a procedure for the user to interrupt this phone-book transfer as some might not want to do it.

The phone-book transfer to T1 memory enabled the headset to recognize the incoming call's number and then announce the caller's name, thus eliminating the need for looking at the phone to see who's calling, especially while driving.

Those who read my reviews already know that I am a fan of putting all the products into real life testing scenarios thus giving out the true picture of the product under review. This practice not only helps the potential customers to know how well or bad the product will perform but also puts the manufacturer's claims to test. I used the BlueAnt T1 headset in the following scenarios:

1. Indoors
2. Outdoors
3. Crowded place with lots of people speaking
4. Cafe with loud music
5. Driving car with music on and windows rolled down

Here are the results of each scenario

Indoors
The T1 Bluetooth headset performed beyond what I expected of it. The voice was clear, crisp, the person on the other side could head me loud and clear and I did not even make an effort to speak louder. At times I also tested it as if I was in a meeting and had to whisper and the result was exceptional. I give the T1 10/10 in this test.

Outdoors
The typical outdoor scenario was myself standing outside my house with few cars passing by and people walking along, no crowd and not much of a noise but typical daytime with birds chirping and kids playing around. I was again impressed with the sound quality of the headset. The person on the other side had absolutely no problem in hearing me too. The speaker on the headset gave out clear notification of the incoming call and it connected like a breeze. The rating in this test was again 10/10

Crowded Place
I went the busiest market place to see how well it will perform when going through crowded place as there are people everywhere, cars passing by and myself walking between them.Results were again, absolutely brilliant. Although I did feel the incoming sound going a little low when there were too many people around but the difference was negligible. I also used the speak to answer mode when I can say "Answer" without having to look at my phone as I did not want to take the phone out of my pocket, it worked flawlessly. Rating for this test, 9.5/10

Cafe with Loud Music
For anyone who thinks that this test would again be flawless should read further. First of all, everyone knows that in cafe's and pubs even listening to the phone is like impossible as the loud music don't let you even notice the phone ring. However, having said that, BlueAnt T1 did the job pretty well by letting me know of the incoming calls, although it took me a little while to notice the incoming call in my ear due to the loud music but talking with the headset was another pleasent experience. Hearing the other side was a bit difficult but not impossible as I pressed the headset to my ear and the voice became clearer. My voice going on the other side could be heard along with the music in the background. The over all test in terms of voice is 6/10 but given the difficult scenario, I'd give it 9/10. I prefer taking my Jabra on such locations as its ear piece get placed well within the ear, blocking out any outside noise but T1 has been a surprisingly good headset for such environments too.

Driving with music on and windows rolled down
The average speed I traveled on was 80Kmph on an open road for 15 minutes, while talking on the phone using T1 BT headset. The sound volume was acceptable and the person on the other side could hear me clearly as well. The company claims for the headset to be perfect up to 35kmph so testing it on 80kmph was pushing it too hard. I say, they should raise it to at least 50kmph as you can never tell the difference in sound quality. Normally we drive with out windows rolled up and air conditioning on along with moderate volume of music so if I can give this headset 9/10 under my stress testing, you can give it 10/10 with your normal lifestyle.

I also tested the following features as well:

1. Incoming caller name announcement. It did not work well on my HTC Desire as it only gave out the number from which the call was being coming. Maybe it is also dependent upon the network as not all countries have similar caller id number format.

2. Pairing with 2 devices. It worked very well with my Nokia E72 and HTC Desire. It was paired with both of them and did receive the calls from the incoming device. The only other bluetooth headset doing this in local market is of Motorola H790. I have used Motorola H790 too and I can say for sure that BlueAnt T1 Rugged Bluetooth Wireless Headset is better than it. Not only in design and features but also in sound quality.

BlueAnt T1 Rugged Bluetooth Wireless Headset is a must have for those who spend more time driving their cars than sitting or working indoors. This is a very good looking device with even better features to match its good looks. There were a few short comings of this headset but they were not at all show stopper for buyers who are looking for a long lasting bluetooth headset. The device come with standard 2 year replacement warranty which indeed is excellent value for money in itself.

I highly recommend "The Rugged" T1 bluetooth headset, giving it an over all score of 9.75/10

This Dual-Port Charger Comes with a Lightning Cable for $14.39