I like Blasphemous. I like Blasphemous a hell of a lot. Then again, I also find myself getting incredibly frustrated with Blasphemous. If there ever was a game that would be perfect for those who are a bit into a bit of masochism, this is it. This is a game that represents all the sad parts of R.E.M.'s Everybody Hurts, after brutally murdering any remotely positive line. Okay, maybe one or two positive lines survive, but they aren't left unscathed, having likely been slit into pieces by even the nicest folks in the game.

Personally, I'm all for this. Not only because I'm just generally miserable, but also because The Game Kitchen worked every single aspect of the game around it. There is nothing, nothing, to be found that is remotely happy. Even things that help you have a sense of the macabre. 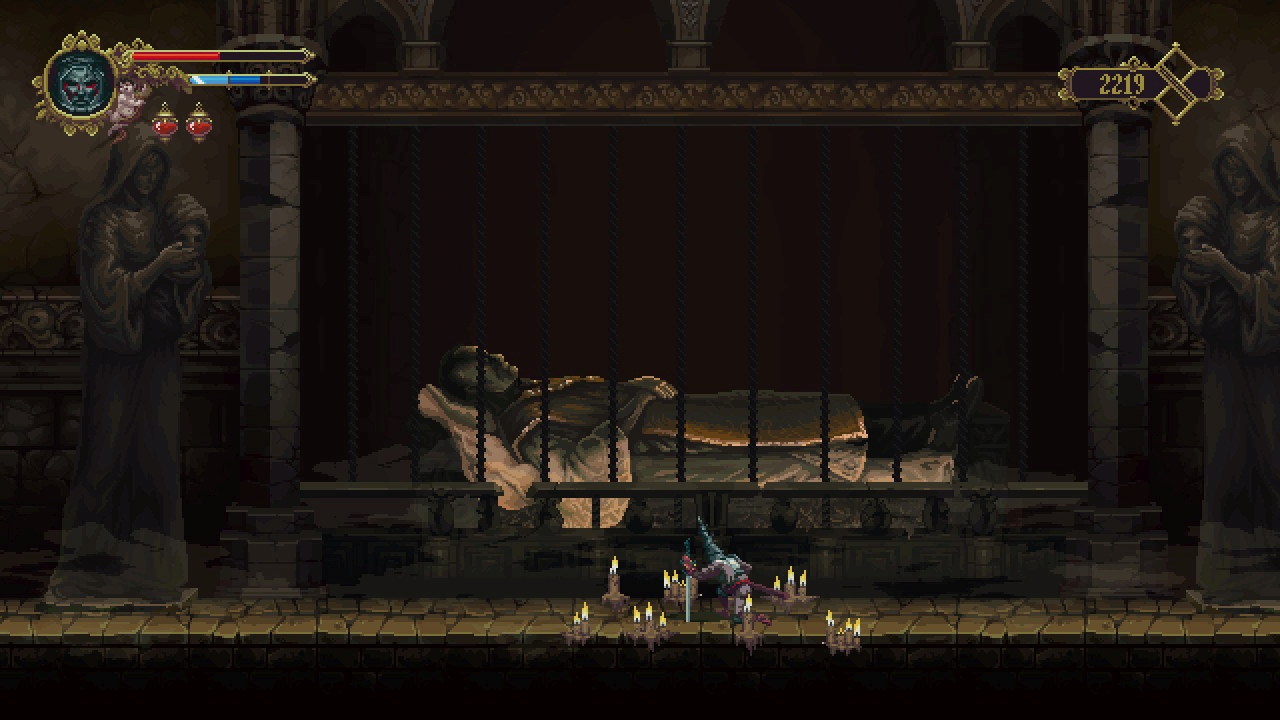 Let's get the obvious comparisons out of the way. Blasphemous could probably be best described as a Souls-oid-vania. It's an exceptional side-scrolling game about being intimidated by the world, never mind the creatures within that are attempting to murder you, the penitent one. Everything within the game is seemingly about punishing you, despite the fact you've already been punishing yourself enough. You wear a conical helmet full of blood, every time you advance to a certain point to enhance your core weapon, it carves its way into your skin, drawing blood.

In fact, the way you heal in the game is just as macabre. You quite literally smash a vial of blood against your helmet. How do you recover these vials of blood? There are blood altars spread around the game at locations which you can spend your resources to both recover your health and fill up your vials or unlock extra vials, provided you have received the required item. You're going to need as many as you can because you'll die a lot. Also, when you die, you leave behind guilt.

Now, this is one aspect I like about the game. What is essentially the souls of this game are tears, which are used to unlock upgrades or as currency when you meet the few traders within the game. Yes, tears. You get these tears by killing enemies and - if you have the right equipment - destroying other random items within the game world. The fact that you don't lose these tears when you die underpins the fact that you can't ever truly feel powerful in this world. Sure, you can use them for upgrades, but you're never going to be able to simply plough whatever's in front of you.

This is where the real core of Blasphemous shines through. As you may have guessed from the tone of the game, the combat is very challenging. It's both about recognising patterns of enemies, but also being incredibly careful. Also, learning how to parry. I'm terrible at parrying so my go-to move is to simply try and jump over any enemy attack. This is probably why I've died as many times as I have. But there's something to be said about the variety and quality of the enemies you face. 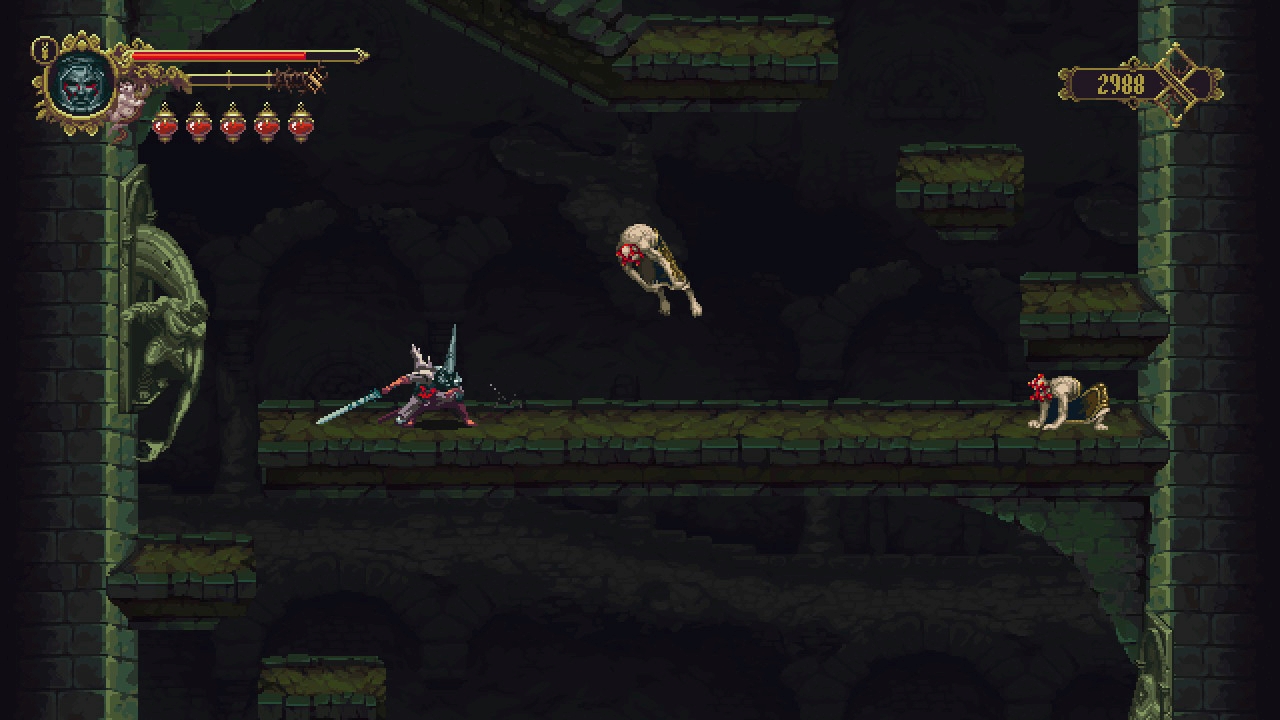 You'll find an almost inordinate amount of detail in each and every enemy you face. Despite the game being pixel art, you can see everything from the gore dropping from a mutated enemy’s mouth or spraying from the back of an enemy that loves to use its weapon to whip itself in the back. Though it's when you're fighting them, particularly when dealing a deathblow, when you see just how much The Game Kitchen has focused on the little things. I'm not even sure DOOM had this much gore.

Indeed, the attention to detail just oozes from every character, animation and scene in the game. I'm honestly not sure if I'm right, but I would bet big money on the mist (or fog?) that passes by in some areas actually containing the spirits of more miserable buggers. I'm being serious, I was sure I could see faces in there. I'm not actually sure if that's just my mind having warped after playing over thirty hours of Blasphemous, or that I'm right.

What I do know is that every single frame and animation are so wonderfully done, it's both beautiful and horrible to behold. It looks and plays fantastic on the Nintendo Switch with nary a single millisecond of a slowdown. Not only does it look fantastic, but it also sounds great too. From the music, which is just as imposing as the game itself, to the voice acting where everybody just sounds like they're ready for death. It's all masterfully done.

If only the same attention to detail was placed into the map of Blasphemous. I've been able to somewhat navigate myself around what is a bloody big game. Things are made easier as you progress because while it isn't as interconnected as other games of its ilk, you do eventually find different shortcuts to help your movement throughout the games many areas and then eventually linking these areas together. 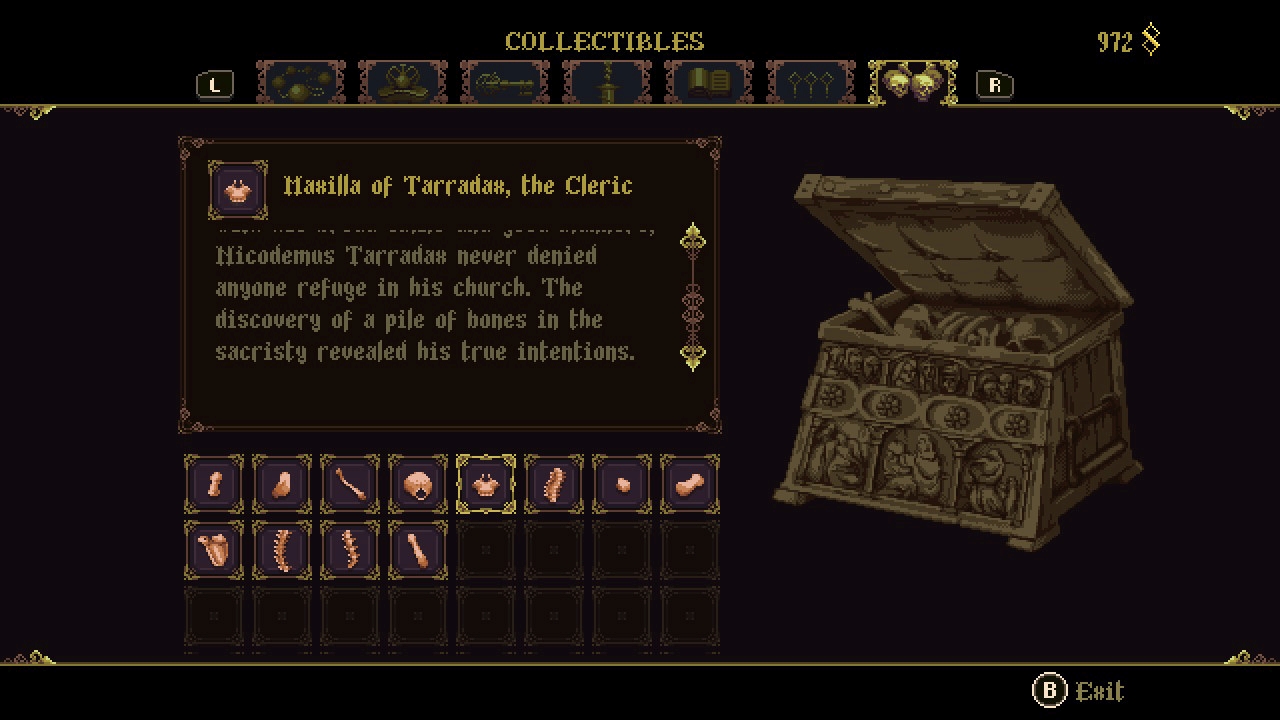 Making it somewhat difficult to navigate can be an issue for one simple reason, most of the things you find to improve your character are found in these little side rooms - as well as a number of collectable items. It's the lore that comes with these items that I love the most, including a lovely take about a priest who would always allow others to take refuge in his church. It was only later that people found that he was a brutal serial killer. Everything is so horribly sad, angry or just looking for death in this game - I love it!

Despite loving it, I suppose it's a negative that I don't actually know what the hell is going on in the game. Maybe I need to be Spanish since a lot of the game is based on Spanish... mythology? Folklore? Religion? Honestly, I don't care. I can live with not knowing what's going on because the little bits of story and world-building I have grasped have certainly interested me.

Let's keep talking negative and go back to the combat. While every monster has its own patterns and are killable, there are moments where the game puts you into an almost impossible position. During platforming sections, which are challenging but not impossible, you can at times find an enemy such as one that throws a cross at you. Jumping over the cross is fine, what's not fine is jumping over the cross which would throw you into a pit of spikes, to find that the platform you were on has crumbled away, dropping you into a pit of spikes. On rare occasions, the game can be bloody annoying. 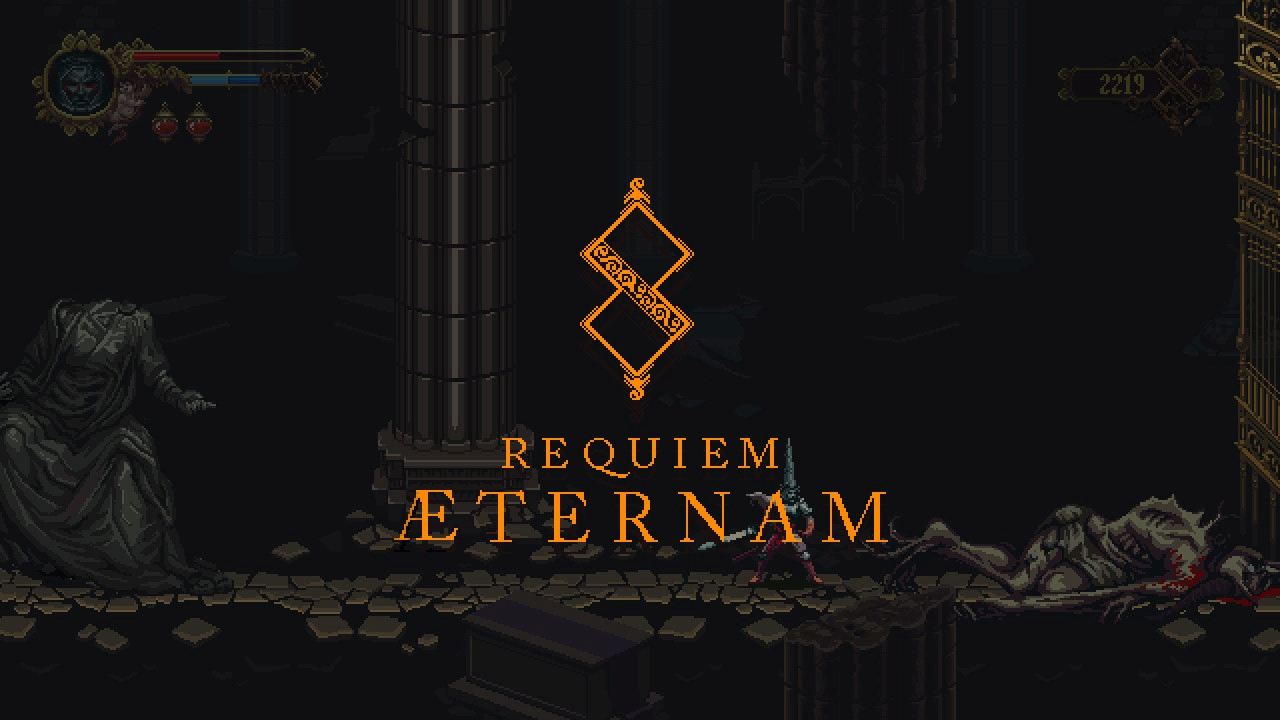 Do I understand Blasphemous? Oh god no, I've barely understood much past the main character is taking the fate of the world on their head and anything along the way, they're taking on their shoulders. They have a classical martyr complex, but with a twist - they're taking on the responsibility as well as the martyrdom. As I've said, I suppose it's a negative that it's quite impenetrable.

Still, I honestly don't care. Did I mention that I like Blasphemous? You're right, I did and I feel the need to say it again. Blasphemous is a fantastic game, it's challenging and fun and the design of the game is just so engrossing in its macabre nature. Would I recommend this? In a blood-gushing heartbeat.

Blasphemous is a fantastic souls-like Metroidvania, featuring an exceptional aesthetic design that adds to what is one of the most macabre worlds in gaming today. In addition to this, outstanding combat and a range of interesting enemies, bosses and more - supported by some great level design (with some issues in navigation), this is a game that I can do nothing but recommend to anybody and everybody. It's difficult, challenging and most of all, fun.