Developer Bloober Team has proven with the original Layers of Fear that they know how to tell a psychological horror story well. The use of the first-person camera view is reminiscent of The Blair Witch Project in a lot of ways, so it was only natural for Lionsgate to turn to the Polish team to develop a game based on the franchise. The match, needless to say, was made in hell, as Blair Witch takes advantage of the series' iconic lore in an extremely good way, making the game not only an excellent horror game in its own right but also one of the best games ever developed by Bloober Team.

Blair Witch isn't directly related to the movies and features an original story which is based upon the same terrifying lore. The game is set in 1996, when a young boy disappears in the Black Hills Forest near Burkittsville, Maryland. Players will control Ellis, a former police officer with a troubled past, as he joins the search for the young Peter. Despite lacking a direct connection, Ellis feels obliged to save Peter, as he has some ties with the boy's older brother. What begins as a simple search, however, quickly turns into a nightmare, as Ellis will not only have to face the evil that lurks in the forest but also his own inner demons.

Being a story-driven horror game, Blair Witch puts a great emphasis on the narrative, which is developed pretty much at all times during the game. Whether it's through documents found in the forest, phone calls and walkie talkie conversations, players will continuously learn more about Ellis and the reasons why he felt he had to travel to the Black Hills Forest. All main characters are well-developed, and while they don't go beyond the usual horror story tropes, they are definitely enjoyable. 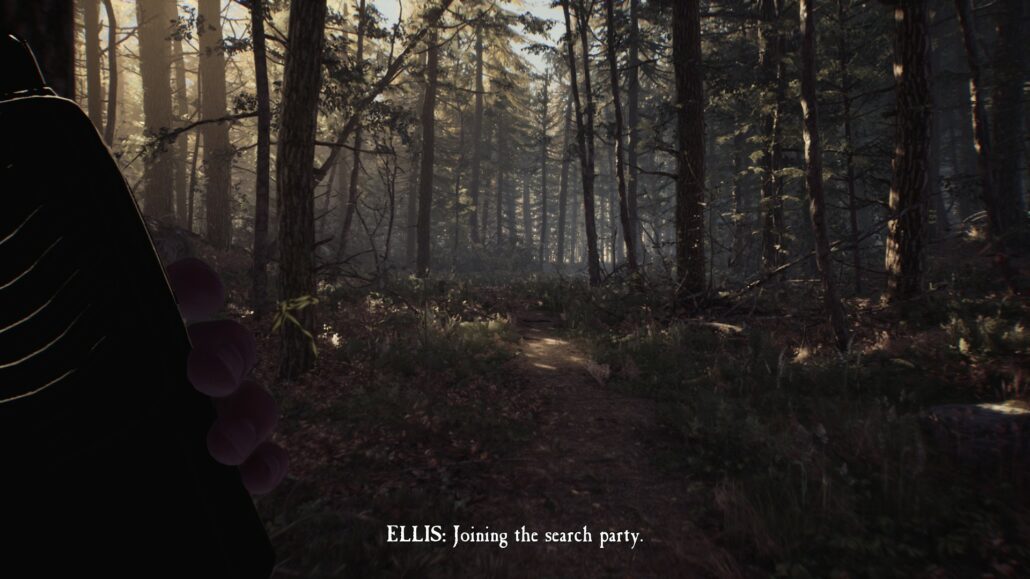 The story itself, while definitely well-developed, doesn't try to surprise players with some big, shocking twists. It never goes off uncharted territory, as far as horror stories go, and the final outcome is somewhat predictable. Judging from how well it is developed, however, it feels like the team wanted to focus more on the actual development, rather than on its shocking factor, and they definitely achieved what they set out to do, as there is just the right amount of mystery to keep things going and motivate players. In a lot of ways, Blair Witch feels like a classic Silent Hill game, not only for the amazing atmosphere but also for the way the game keeps players engaged: it gives enough information to continue while keeping things somewhat nebulous so that players have to be on their toes at all times.

The fact that the story has been made to be easy to follow is a definite plus. Both Layers of Fear games have a somewhat obscure story that has to be pieced together by the player, which can be confusing for those who have no wish to delve so deep into them.

The Blair Witch story is, without a doubt, engaging, and the gameplay experience only contributes to make the whole experience enjoyable from beginning to end. Right after starting the game, While it's clear that the development team didn't want to stray too far from the linear, narrative-driven experience of the Layers of Fear games, it's also evident how they wanted to shake things up a bit and provide an experience that goes beyond simply walking from one story sequence to another. 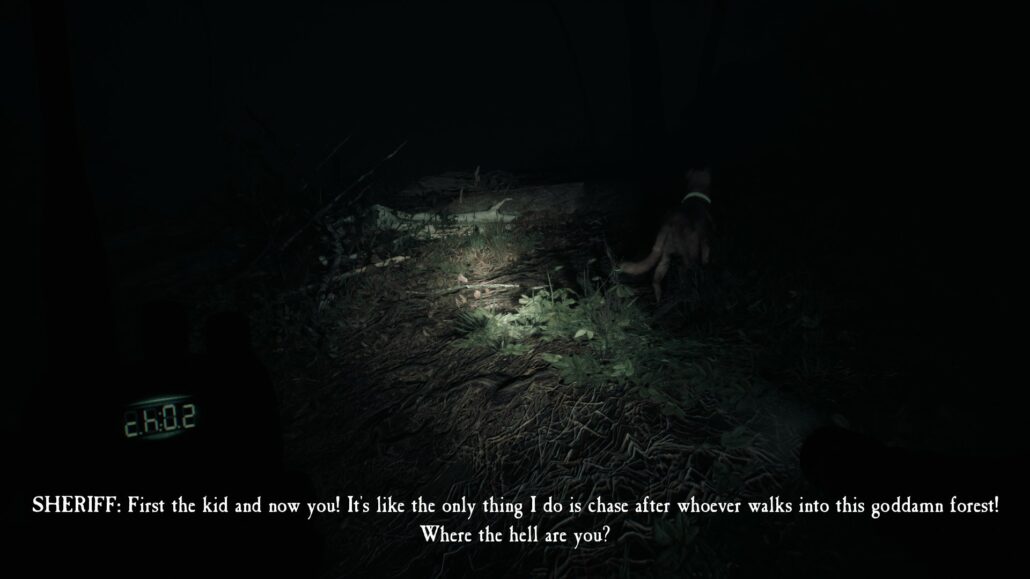 Blair Witch features a mostly linear experience, but it has been enhanced considerably with new mechanics that give players the illusion that it is not so linear after all. The biggest addition to the formula, which still sees players moving from one location to another to find clues leading to the next step, is Bullet, a companion dog NPC. Bullet is fully independent of the players, and he is a tremendous help at all times since the can lead them on the correct path, discover important items and warn them of impending danger. Bullet can also be given some basic commands, and he can also be petted and be given treats, actions that improve the relationship with Ellis and make him even more dependable.

Having Bullet close at all times is also important for Ellis' mental health. He is still suffering from some previous trauma, and being too far from Bullet will worsen his mental condition considerably. Bullet is also an extremely important asset in combat, and his presence is usually what separates players from life and death. Thankfully, he cannot be harmed, so players won't have to deal with any heart-wrenching sequence showing the poor critter getting harmed: the otherworldly presences of Black Hills Forest are only after Ellis.

Combat, while simple, is an extremely welcome addition to the gameplay formula. In specific locations, players will be attacked by these mysterious creatures that cannot be seen, in true Blair Witch fashion. Bullet, on the other hand, has a rough idea on where they are, allowing players to fight back with torchlight, as the creatures do not like light at all. Blair Witch is far from being a combat-heavy game, but the inclusion of these confrontations is extremely welcome, as it ramps up the tension and makes the stakes feel more real. 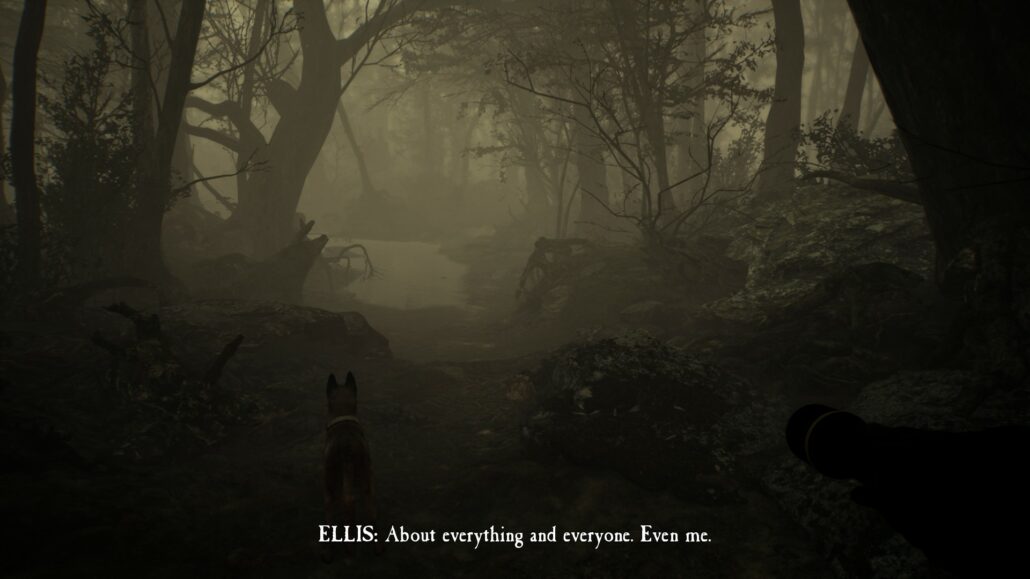 As already mentioned, players will be exploring the forest and several different locations in search of clues that may point toward the disappeared kid. There will be times, however, when no clue can be found, only some mysterious tapes that show events that have transpired in the past. These tapes can be watched with a video camera, something that serves as a real gameplay mechanic and not just as a reference to the original Blair Witch Project.

The Blair Witch red tapes can be used to manipulate reality. The first one that can be found shows Pete dropping a toy police car in a specific place.  Stopping the tape at the right them when the toy is dropped makes the toy appear in the actual location as well. Another tape shows a tree falling on the path, and stopping it at a time when the tree is still standing will open the path again. This mechanic is not only extremely original, but it's also implemented in such a great way that it feels totally coherent with the setting and tone of the game. The camera will also play an important role when the torchlight is not working. By using the camera's night mode, it will be possible to proceed without literally walking in the dark. 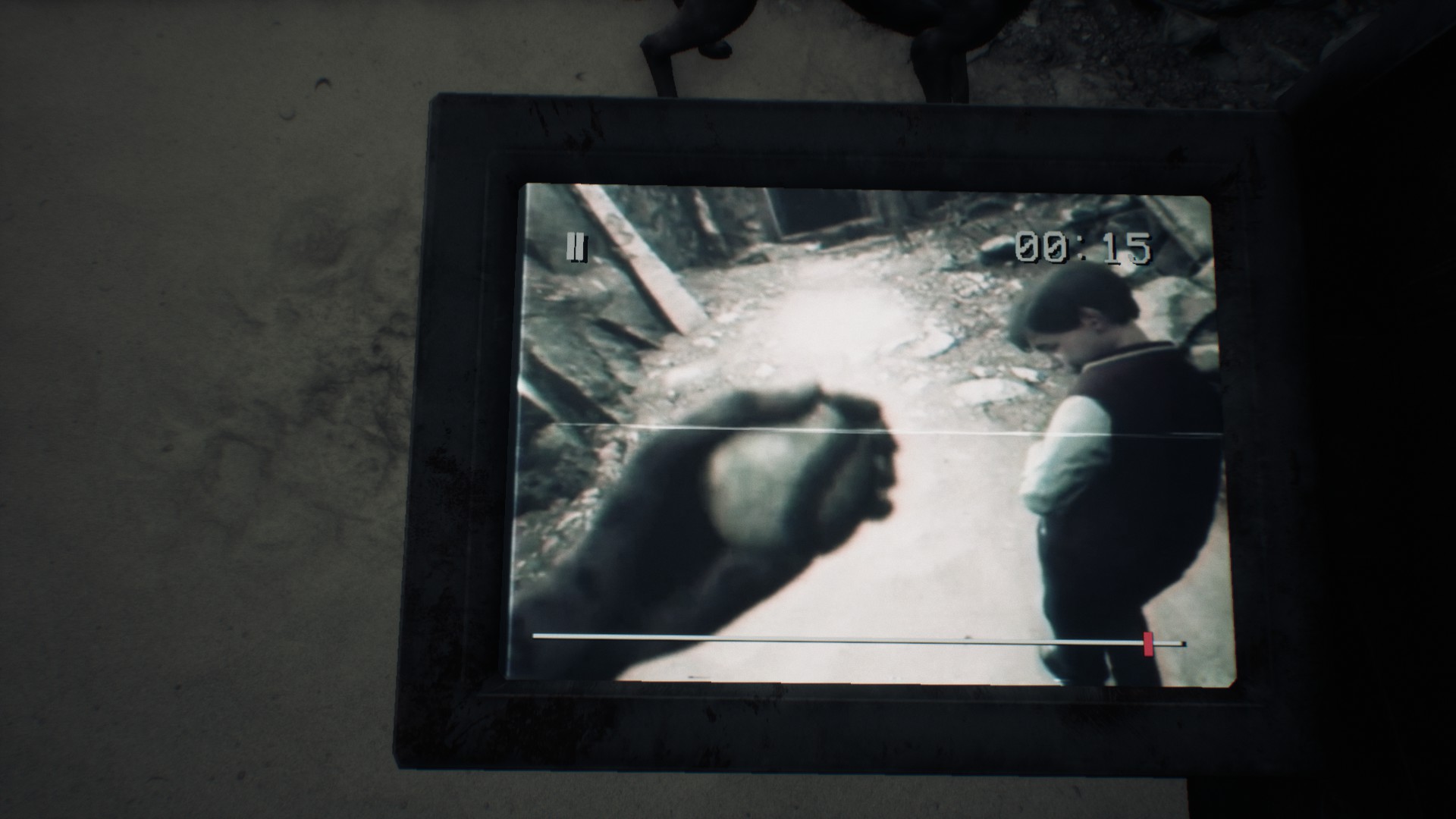 Adding even more to the experience is the number of optional content scattered around. While the experience is mostly linear, there are some branching paths leading to additional items that, once collected, can provide more details on the story and unlock achievements. Additional conversations with characters through the walkie-talkie and cellphone are also available, as well as a couple of mini-games that can be accessed through the phone. These do break immersion a bit, but they are completely optional and players don't have to access them if they do not want to.

Even with all these additions and tweaks, Blair Witch is still an extremely linear experience. It is also somewhat short, so don't expect to have much reason to play through the game again, unless you missed some of the optional items or conversation.

The great atmosphere of the game could be a reason to play through the game. The Blair Witch setting isn't particularly elaborate, but this didn't stop Bloober Team from injecting their typical almost psychedelic transitions into the game. With Ellis' unstable mental state, it's no surprise that hallucinations and distorted memories of the past are included in full force. As they are rooted in the main character on an extremely deep level, they also feel almost natural, and not forced as they sometimes do in the Layers of Fear games. They are less extravagant, sure, but definitely more coherent with the setting and story.

The great atmosphere is enhanced by the presentation, which is quite good. The forest setting becomes a little repetitive down the line, despite the game taking place at different times of day and different weather and visibility conditions, but it is well done, and the different landmarks make it feel realistic and believable, despite very little of what happens in it is. The PC version looks quite good at max setting, 1080p resolution, but optimization doesn't seem to be the best, as performance isn't solid, which is baffling, considering there isn't much happening on screen at most times. 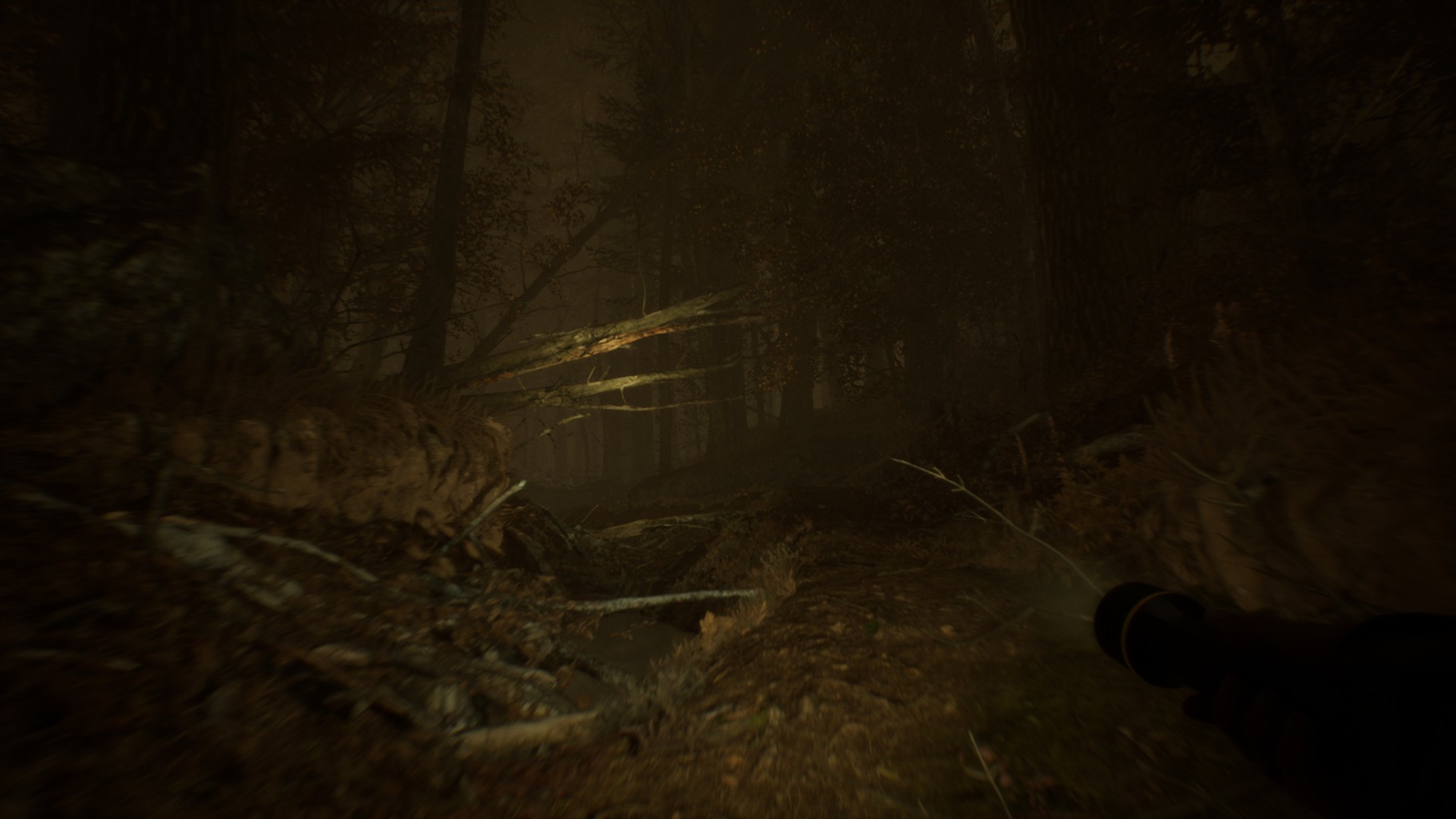 The audio is also extremely well done. Blair Witch uses binaural audio and is best played with headphones. It also works quite well, especially during combat, as following the audio cues from Bullet is required to locate the enemy and bathe them in light. Voice acting is also spot-on and competent, and so is the soundtrack, despite not being particularly varied.

At the end of the day, I enjoyed my time with Blair Witch a lot, thanks to the great atmosphere and overall feel of the game, which is extremely close to the classic Silent Hill games. With the additions to the gameplay formula that make the experience more involving, Blair Witch can be rightly considered as the best game ever put out by Bloober Team, and one of the best horror games of the year so far.

PC version tested (review code provided by the publisher). You can purchase a digital copy via Green Man Gaming.

Blair Witch is, undoubtedly, a very good horror with an enjoyable, albeit a little predictable story, great atmosphere and more involving gameplay, which all take full advantage of the license. Despite some issues here and there, like the excessive linearity, little replay value and technical issues, the game is definitely among the best titles created by Bloober Team. Recommended to all horror games fans