Dropping the vector wireframe for electric neon polygons, Battlezone VR brings that stylistic charm of the early Atari days forward into the launch of PlayStation 4’s virtual reality platform. However, it’s far more than a simple remake for its 36th anniversary. This isn’t the first time that Rebellion has gussied up its first person tank simulation, as an original Xbox and Battlezone 98 Redux each gave their own spin on the simple tank-centric gameplay. While the strategic elements aren’t quite as present in Battlezone, that streamlined experience actually works in its favor.

While there’s not a central campaign to Battlezone, the team at Rebellion took a unique approach to the arcade formula by imbuing it with some of the random elements you might see in a roguelike. With initial options for how long a campaign you’d want to play (number of nodes/events to play through) and difficulty, as well as the option to seed the level with a premade code if there’s a particular level style you’d like to experience. This doesn’t disable trophies, so it’s perfect for those trophy hunting enthusiasts.

Regardless of what length of campaign you’re going for, the initial setup remains the same. The first step to any fresh game of Battlezone is picking out which tank to control. The tanks have their own stats of armor, speed, and other essential abilities as well as a varied starting loadout. Only three body styles are available at the beginning, with new classes unlocked as the player finishes certain tasks. No matter the style of tank you start with, they’ll always have a backup blaster cannon that, while useful only as a last resort, can help replenish the player’s arsenal with guaranteed ammo drops from enemies. 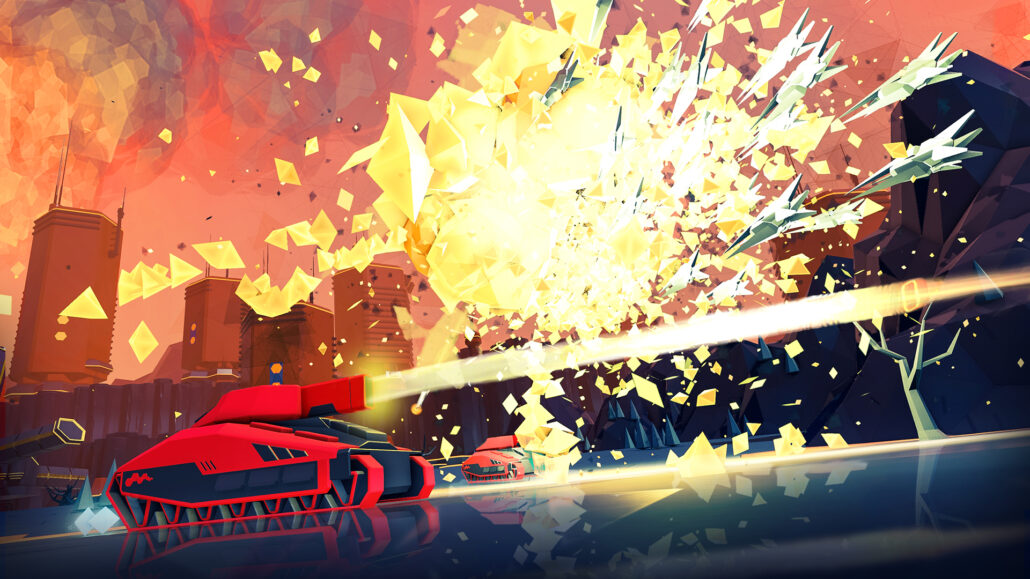 Battlezone VR plays like a true first-person shooter, albeit from the first person cockpit view of a giant tank. While the player can freely look around their viewpoint with the VR headset, actual gameplay and aiming the tank’s munitions is assigned to the PlayStation 4 controller. It’s important to keep in mind that you’re driving a vehicle with two sets of treads, so turning and evading attacks might not be as nimble as you would like. In fact, everything about piloting a battle tank feels slower paced and deliberate. Exhausting your weapons’ magazines and reloading takes a considerable amount of time, forcing the player to reconsider going on the defensive while their weapons recharge.

Once dropped into a game, Battlezone VR presents itself almost like a board game with a randomly generated board. The goal of each campaign is to make it to the volcano space at the other side of the board, taking out specially marked spaces that represent shield generators that protect the final enemy base. Along the way, each space the player can move is hidden from view (unless the player cashes in a bit of in-game currency to sneak a peek at a tile of their choosing). More often than not, these tiles will be new battlefields with simple objectives. Occasionally the player might have a spot of good luck and come across a random event that gives them a surplus of cash, or a supply depot to spend said cash on upgrades and new weapons.

All of Battlezone’s gameplay takes place in the cockpit of an oversized battle tank. Everything from in-game menus, navigating the campaign board and of course gameplay all utilizes the space wonderfully. I do have to give props to Rebellion on their stylistic choices that seamlessly integrate the tank itself into every facet of gameplay. The overabundance of neon lighting and polygons gives Battlezone a stylish look that works well combined with the PlayStation VR’s resolution as if you’ve been dropped right into Tron. Playing Battlezone on the PlayStation 4 Pro is a crisper experience, giving more detail to the tank’s menus and onboard readouts and being overall easier on the eyes. Having played hours of Battlezone on both a Standard and Pro console, it’s not enough of a fidelity boost that I’d advocate only playing on one console versus the other, but you’ll certainly be glad that you invested in the more powerful console if only for the little bonuses. 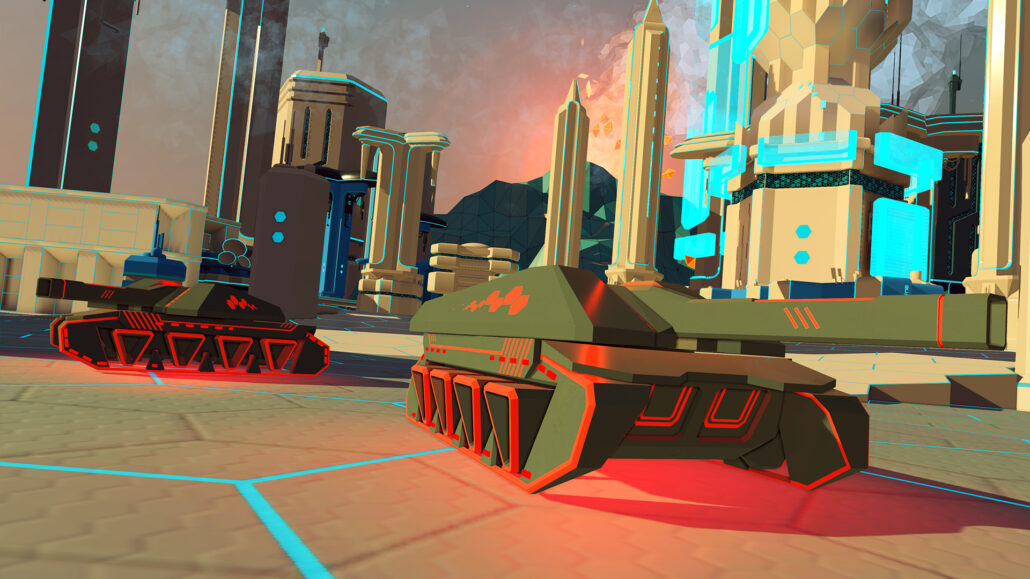 No matter what style of campaign you’re playing, Battlezone integrates online multiplayer fairly seamlessly with the ability to hop in and join campaigns in progress. However, the lasting power of the online community was somewhat lacking when I revisited this title nearly a month after launch. I found only a single party that was playing through a campaign on Hard mode. Hosting my own campaign proved just as fruitless without any current players looking to join in on a Sunday afternoon. If you’re looking to enjoy Battlezone online, my advice would be to coordinate with friends or like-minded individuals through the PS4 Communities feature to experience Battlezone proper.

Battlezone VR doesn’t quite live up to its name in terms of the virtual reality experience, however. With most of the controls delegated nicely to the PS4 controller, the act of actively looking around the cockpit of your chosen rig is the limit to the immersion of VR. Taking up the cockpit of a giant tank felt great initially, especially with not receiving any of the motion sickness that other cockpit experiences such as EVE Valkyrie brought about. That novelty wore off by the end of my first extended campaign and I was left wanting to take the PSVR headset off and play it like a traditional first-person shooter. The extra dimension of visibility is a nice novelty but not quite as mindblowing as some of the other experiences available for the PSVR’s launch.

Rebellion was given the improbable task of building a first-person shooter for PlayStation VR and took a fairly safe approach to the formula. While not on the same pace as something like RIGS, Battlezone VR is a more methodical shooter that should serve as a solid starting point for gamers looking for something more action-centric on the platform.

Review code for PlayStation VR (PS4) provided by the publisher. The game should also launch on PC next year.

It may not be one of the must-play titles on PlayStation VR, but if you’re looking for a challenging experience to share with friends, strapping yourself into Battlezone should serve as a good introduction into what virtual reality should feel like.