The fact that the Battletoads are still culturally relevant at all is kind of ridiculous. These shameless TMNT clones haven’t had a new game in 26 years, and yet, most gamers today still recognize their slimy faces. That’s mostly due to the enduring quality (and legendary difficulty) of the original NES Battletoads, which still holds up better than 95 percent of the 8-bit “classics” you can name.

Creating a proper successor to the original Battletoads is no easy task, and after putting it off for decades, Rare has handed the job off to a relatively untested indie dev, Dlala Studios. Do they manage to replicate the tongue-in-cheek humor, unpredictable level design, and brain-melting, yet addictive challenge of the NES Battletoads? Or is this new game a blemish on Rash, Zitz, and Pimple’s legacy? Get mad, bad, and crazy, because it’s time to jump in… 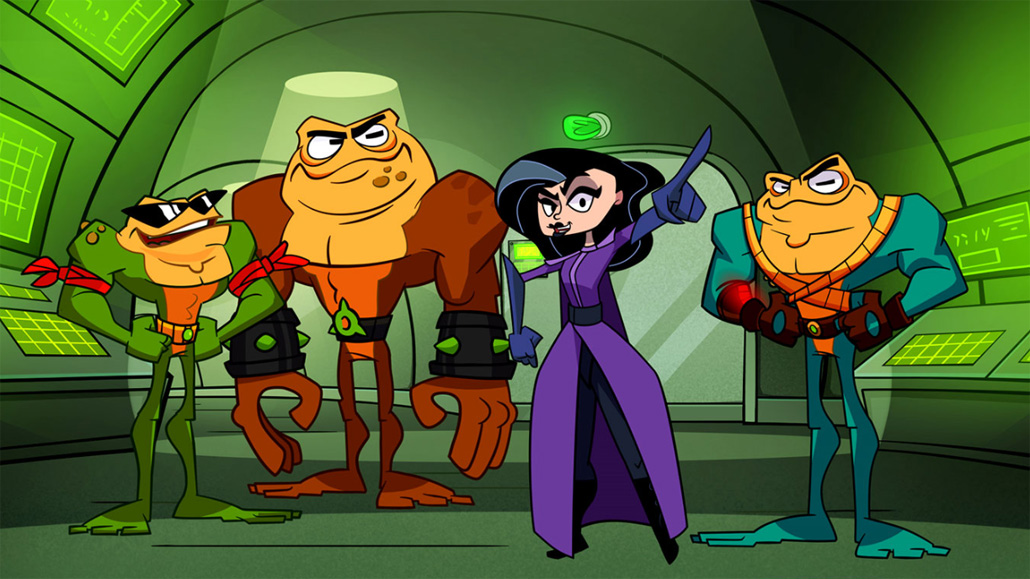 The new Battletoads opens with our heroes saving the day yet again and basking in the well-deserved adulation of their worldwide fans…until they discover they’ve actually been trapped in a simulation for the past 27 years. Whoops! While the Toads were living a fantasy life, the world moved on, and they’re forced to get real jobs. That goes about as well as you’d expect, so the Toads decide to reclaim their 90s celebrity by doing what they do best – kicking the Dark Queen’s butt. Unfortunately, the last few decades haven’t been great for the Queen either, as she’s been held hostage by a race of all-powerful aliens known as the Topians. If the Dark Queen isn’t famous, the Battletoads can’t get famous by foiling her schemes, so they decide to team up with her and deal with the Topians before getting back to their rivalry.

Battletoads 2020’s setup is smart, playing up the series’ long absence for meta laughs, but unfortunately, the game never really pays it off in a satisfying way. Following the strong opening act, the game’s plot loses direction, meandering through a series of episodic tangents. The game’s writing can be clever, and the Toads and Dark Queen’s personalities are nicely fleshed out, but individual jokes are hit and miss. Don’t get me wrong, I definitely chuckled a few times, but sometimes the game reaches a little hard for that Adult-Swim-style edgy humor. I suggest you mentally prepare yourself for the scene where the Dark Queen talks out of her butt like Ace Ventura. 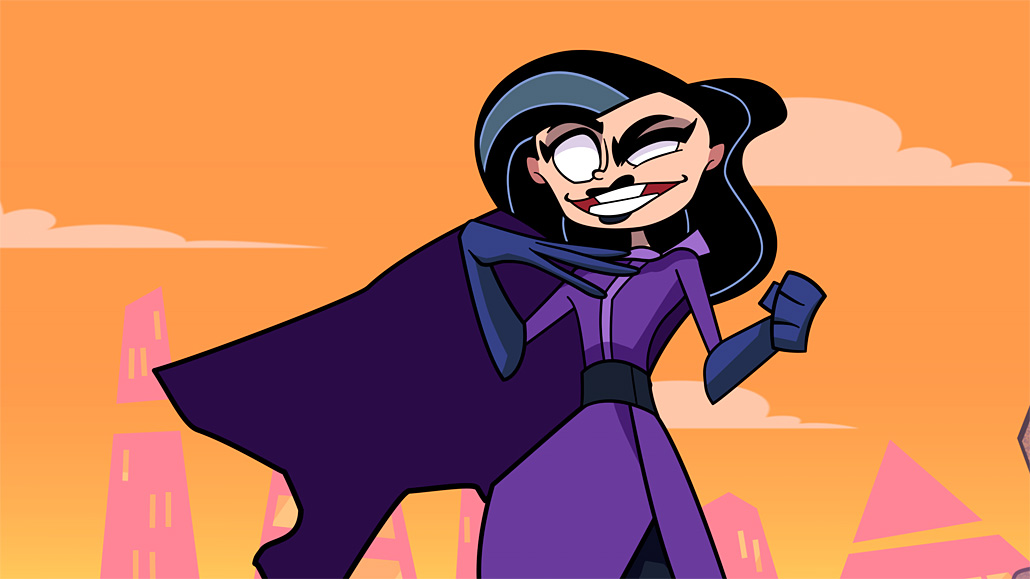 While Battletoads’ writing is a bit uneven, its visuals mostly deliver. The new art style takes a few minutes to get used to, but the game’s beautifully animated, with tons of great little touches that really bring the Toads and their enemies to life. Cutscenes aren’t quite on the same level, as they feature typical TV-quality flash animation, but they get the job done. Meanwhile, the game’s soundtrack is appropriately badass, offering up covers of classic Toads tunes (sadly the original's most infamous song doesn't play when you pause) as well as some rockin’ new numbers. Voice work is also top notch, thanks to a cast of animation and video game vets like Ryan Ridley (Rick and Morty, Star Trek: Lower Decks), Kosha Engler (Horizon Zero Dawn, The Crew 2), and Eric Bauza (literally every cartoon for the last decade).

Of course, presentation doesn’t matter much if a game doesn’t play well, but thankfully, Dlala Studios mostly get it right. Each Toad has their own strengths and weaknesses, and during brawling stages, they can dish out standard strikes, a launcher that knocks enemies into the air, and a Morph attack that clears enemies out of your path and breaks through shields. In addition to the violent stuff, the Toads can also quickly evade enemy attacks with a press of the right shoulder button, snag enemies with their tongues or tie them up with sticky spit. The game’s controls are responsive, and once you get a hang of the Toads’ abilities you can start tying together some pretty satisfying combos. 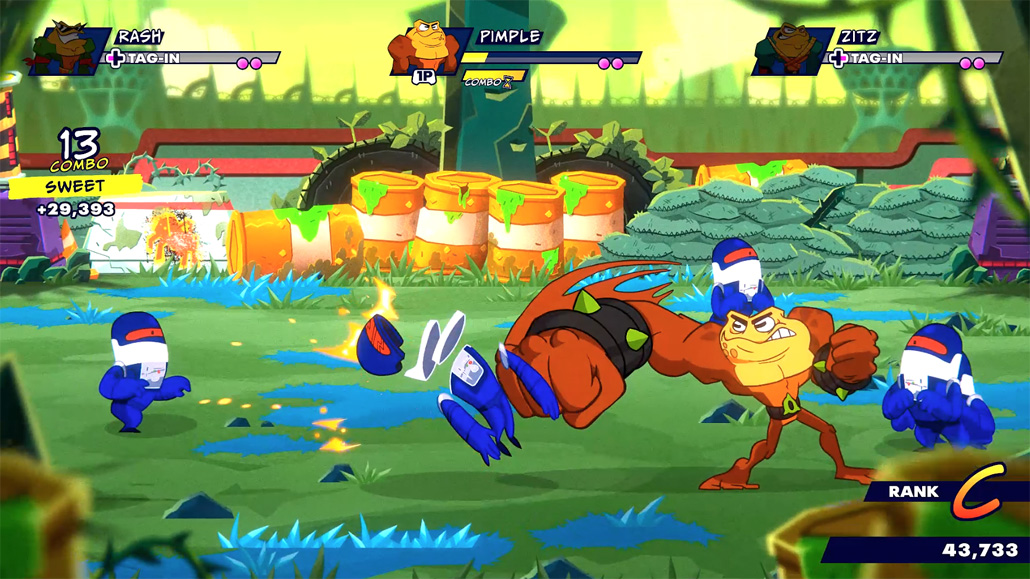 That said, while Battletoads’ brawling is solid, it isn’t quite as satisfying as, say, the recently-released Streets of Rage 4. Enemies take a few too many hits to destroy and there are some annoying balance issues. A number of enemies fire projectiles at you, which are hard to dodge and do way too much damage. In general, Battletoads tends to throw too many enemies on screen at once, to the point the action starts to feel a little too chaotic. It seems Dlala realized Battletoads’ brawling can be a bit frustrating, as the game is surprisingly forgiving when comes to death. When playing co-op, you can revive partners, and during single-player sessions you can switch freely between the Toads and if one falls you can resummons them after a short cooldown. This keeps the brawling sections from becoming too much of a grind, but also means you can kind of cheese your way through them.

I’d probably be pretty lukewarm on Battletoads 2020 if it were just a brawler, but much like the NES original, this new game thrives on variety. The 8-bit Battletoads initially seems like it’s going to be a fairly by-the-book Double Dragon clone, but then spins off in a half-dozen different directions, and Dlala pulls off a similar trick here. Yes, the infamous Turbo Tunnel obstacle courses are back, but they’re just the beginning. From level to level Battletoads morphs into a rhythm game, twin-stick bullet-hell shooter, non-violent indie-style platformer, and more. 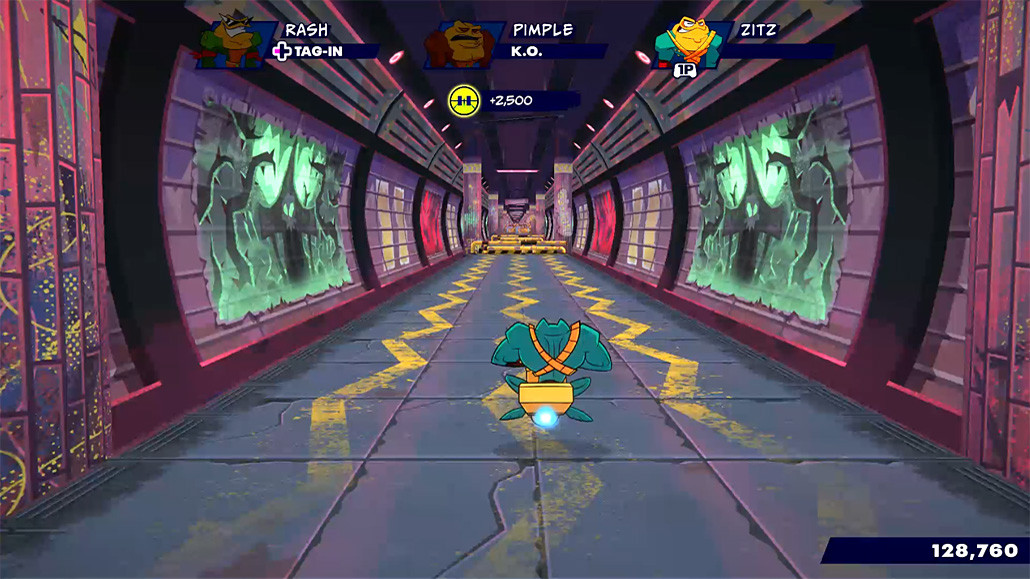 Thankfully, this isn’t a “jack of all trades, master of none” situation, as all of Battletoads’ varied play styles handle well. The non-brawler levels are also where most of the series’ trademark difficulty is to be found. Trust me, you will work up a sweat as you dodge walls on your Speeder Bike or careen over platforms on an out-of-control bobsleigh, and yet you’ll keep coming back for more. This game delivers that perfect level of “one more try” compulsive challenge. That said, if you’re not looking to punish yourself, the new Battletoads is also much more accessible than its NES predecessor. The game offers and easy mode and you can even activate temporary invincibility if you die enough times on a certain challenge. Oh, and don’t worry, if you are a masochist, there’s an extra hard mode as well.

Of course, you don’t have to grapple with Battletoads’ challenges alone as the game supports co-op for up to three players. Playing with friends can be a somewhat patchy experience -- co-op is definitely the best way to enjoy the brawler stages, but the game’s racing and puzzle-solving sections don’t necessarily improve with backup. Also, be forewarned, Battletoads is purely a local multiplayer game. I’m always a supporter of couch co-op, but it would have been a nice social-distancing-friendly move to include online play as well, even if it wasn’t perfect. 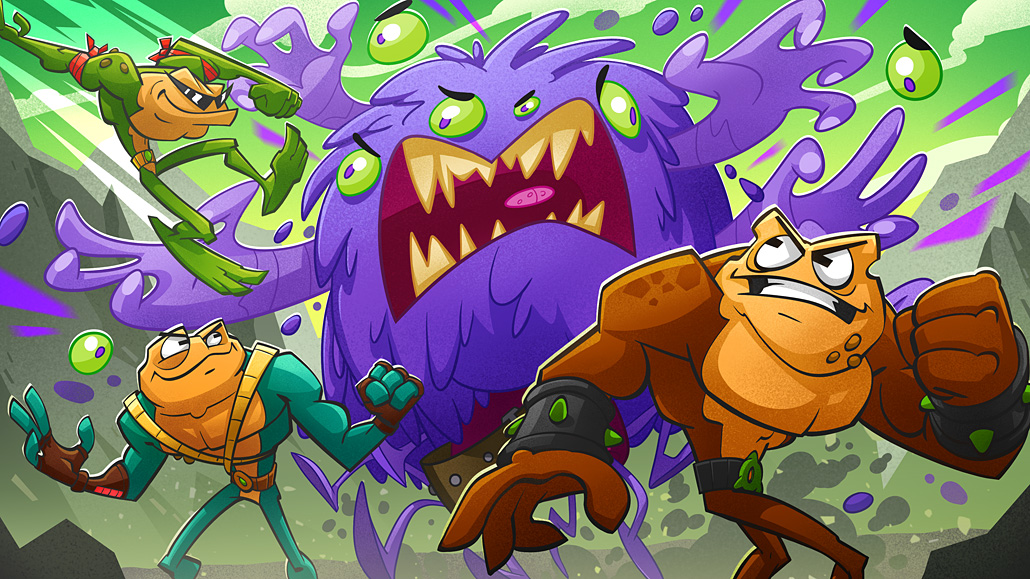 The new Battletoads is almost as beefy as its musclebound heroes, serving up a substantial 5-to-7-hour campaign as well as additional collectibles and high-score challenges. Not bad for $20. Battletoads 2020 probably won’t be quite as durable as the NES original, but you may find yourself hopping back into the game more often than you expect.

This review was based on a PC copy of Battletoads provided by publisher Xbox Game Studios. You can grab the game on the Microsoft Store.

Battletoads is surprisingly successful at recapturing the spirit of Rare’s beloved NES original. The game’s striking visuals, wildly varied level design, and satisfying sense of challenge easily make up for the occasional frustrating moment or groan-worthy joke. If you’ve been waiting 26 years for a new Battletoads, Rash, Zitz, and Pimple’s latest ought to scratch your itch.