Battlefield has always held a stark contrast to the other mass-market first-person-shooters that round out the Fall releases each year. Instead of leaning into the twitchy shooting that Call of Duty is known for, Battlefield has had the pride of continuously offering 64-player matches (traditionally just on PC, but with the more powerful consoles, this has become part of the PS4/XB1 ecosystem as well) with a class-based system to give each player their own defined role in winning the fight. This year’s incarnation, Battlefield V, takes players back to World War II and back into the trenches of the Axis vs Allied battles that saw the rise of more efficient killing tech both on the ground and in the air. 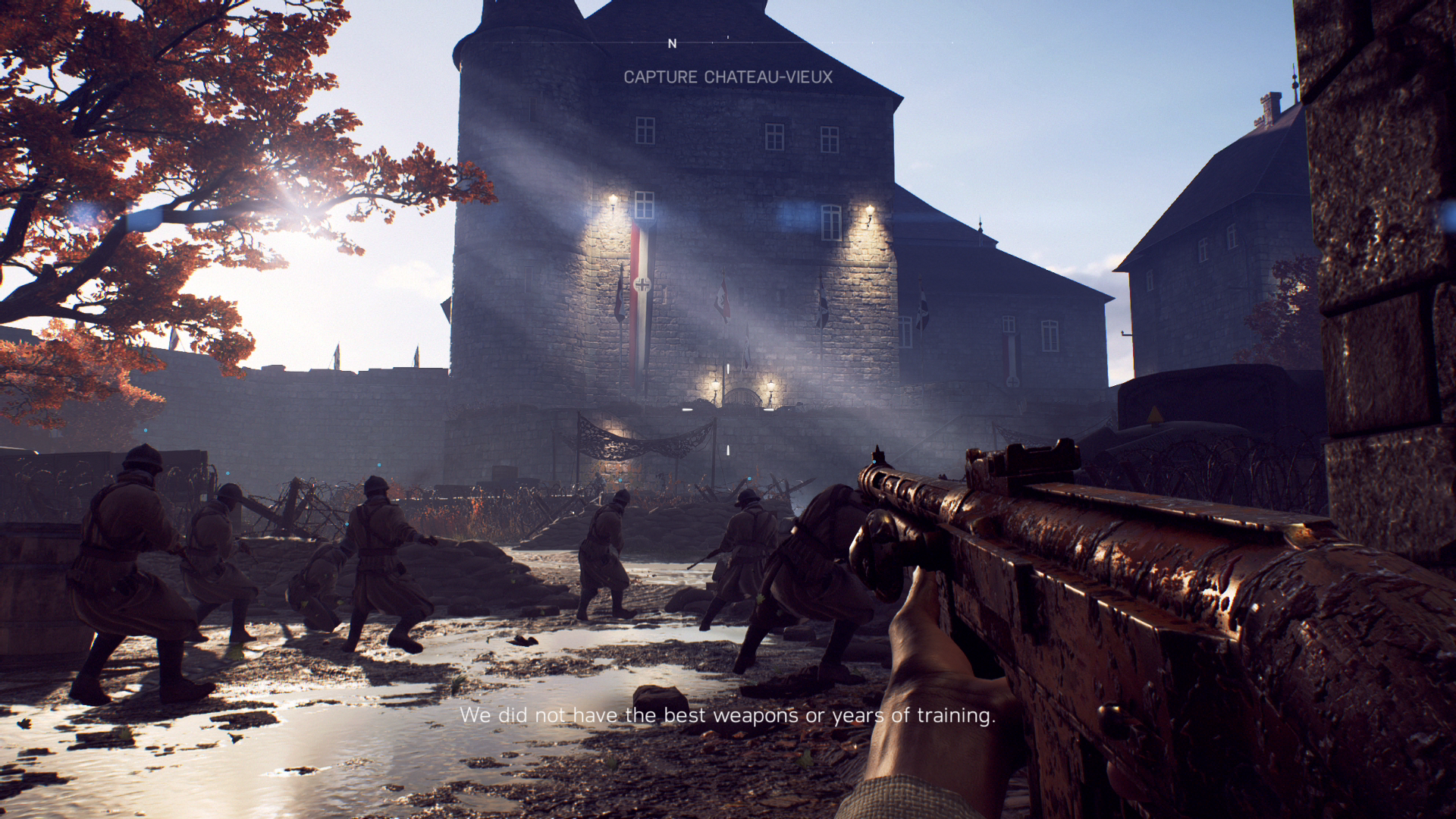 Battlefield V’s single-player offerings come in the form of War Stories, three-segmented vignettes (a fourth is coming within the next few weeks) that don’t tie into each other or the multiplayer save for a couple of locales that get reworked into multiplayer maps and a trio of melee weapons that get unlocked once a player completes 100% of the optional objectives. Each War Story only lasts a few brief missions and unless you’re playing on Hardcore and having to replay checkpoints over and over, you’ll get through them all in just a couple of hours. As a whole, these stories feel uninspired and little more than checking a box to say that the complete Battlefield V package includes single player unlike the other major AAA shooter out this year. The characters themselves are diverse and interesting as opposed to the generic British or American soldier that would typically be the focus of a grand campaign, but perhaps that is the best that I can say about them. Each of the three heroes and heroines is tasked with insurmountable odds against the Axis forces and each has a very small but important contribution to the war at large.

During the war stories, there is a nice assortment of stealth sequences, infantry assaults, and in only a few brief moments, sections where a vehicle or turret can be manned for some additional firepower. Each vignette ends with an open-ended map that gives players some leeway to capturing objectives and feels like a proper Battlefield experience, even if it’s just one soldier against the world. Two of the three final set pieces are pretty good, although I’ll loathe playing Tirailleur a second time after enduring one of the final bases captures for nearly two hours on the highest difficulty. If you’re looking to just cheese your way through the mini-campaigns, a silenced weapon can get you through most intrusion sequences without ever raising an enemy alarm and defeating most of the challenge. 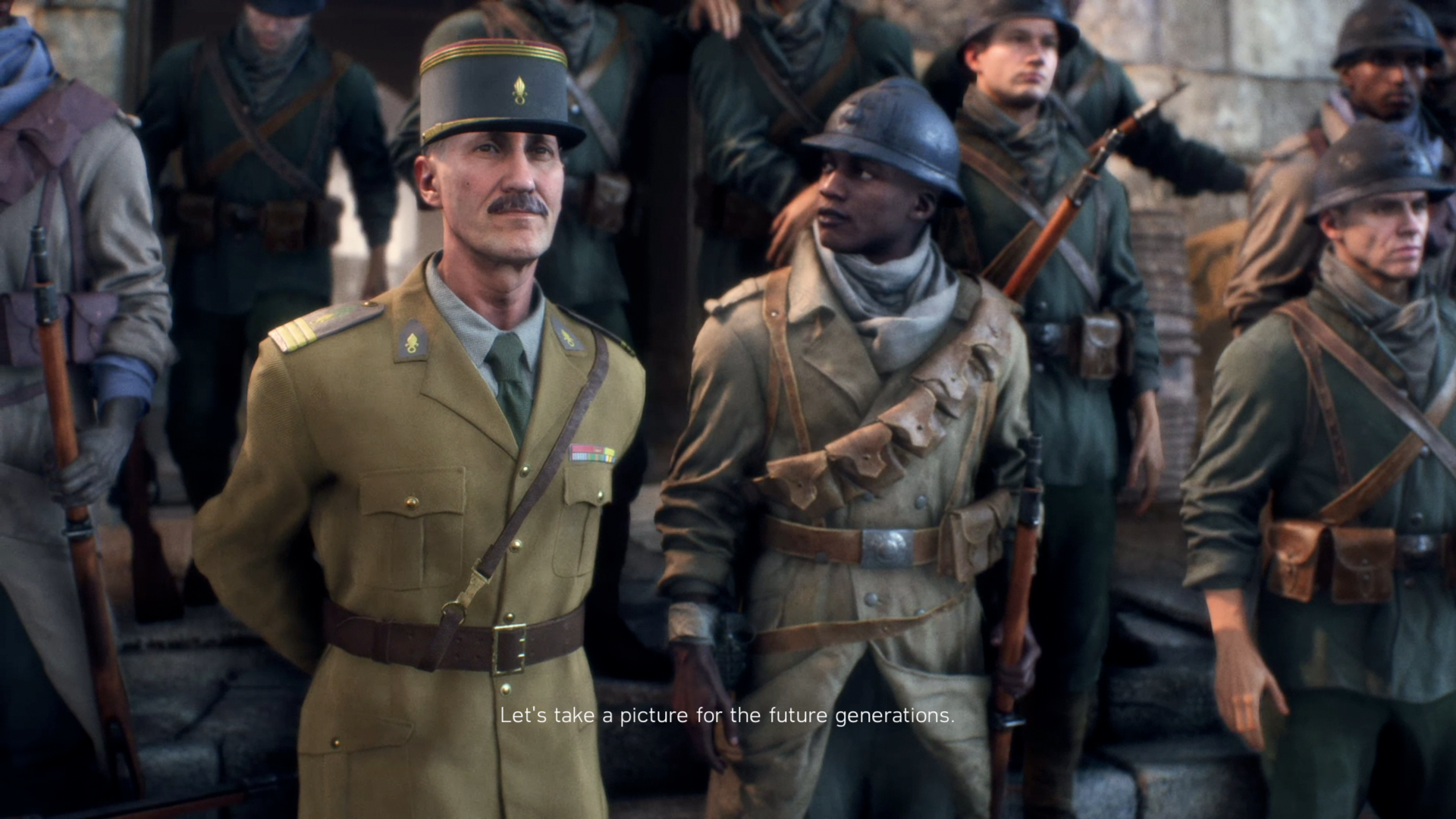 Each class in Battlefield V feels tuned to work in a different playstyle, yet all can come together to make an effective squad. With health and ammo both scarce in supply on the battlefield, keeping both a Support and Medic type in your team can keep the whole squad topped off before attacking the next enemy point. In fact, the Medic is the strongest that it's ever been in a Battlefield game. With health packs being the primary way to recover back up to 100% health and only being able to carry one at a time, successful squads are going to have at least one on the frontlines if not for their efficient revival skills as well. Only the Recon class can Spot an enemy via their scope accessory, but other classes like Support can do the same if they fire at and Suppress an enemy. Lastly, there’s the Assault which traded the ammo pack for a Panzerfaust, an anti-tank rocket launcher that in its current phase is too strong. Many vehicles like the Half-Track go down in a single rocket and tanks often lose all mobility if hit from the side or rear.

No matter what class you play in Battlefield V, they’ll all have about eight different primary weapons to choose from that unlock as your rank in each class improves. I found the starting weapons for each class to be pretty well tuned, although I instantly swapped my Support’s machine gun for the KE7 and never looked back. Typically, each class will have two different weapon classes to work with to broaden your playstyles, such as giving Recon both the option for bolt-action/semi-auto sniper rifles and shotguns to cover all distances of the map.

The customization to weapons in Battlefield V is a bit of a mixed bag. You have more control than other FPS like Call of Duty where you can customize the receiver, magazine, and other attachments separately with different camo patterns. Each primary weapon gets around three different scopes to work with that vary between iron sights and higher magnification scopes depending on the class, but there aren’t any deeper customizations such as extended magazines or specialty barrels. Instead, each primary has a four-point upgrade system that has players choose between performance balances such as rate of fire or recoil. This same upgrade tree also carries over to vehicles and makes them more finely tuned to the individual player’s style. 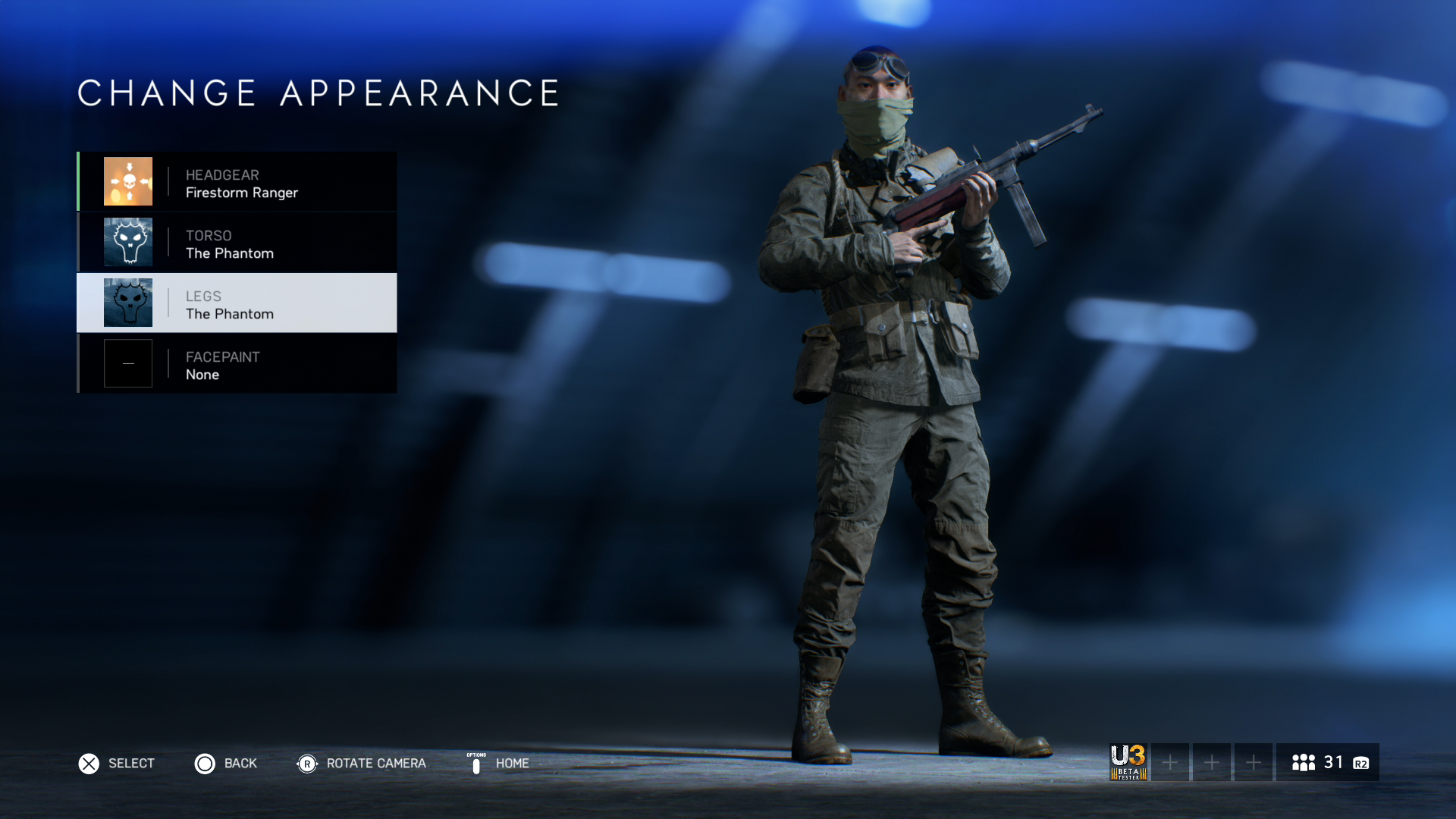 After the backlash over prosthetics and other cosmetic enhancements that were shown off in the initial reveal trailers, what’s left for players to kit out their officers in Battlefield V feels quite limited. Most classes only have a few costume choices that can be individually customized between headwear, clothing, and footwear. Within these choices are a couple unique choices that give the character a bit of unique flair, while the others are just routine military fatigues in a variety of colors that have to be unlocked either through daily challenges (‘Assignments’) or through the purchase with Company Coins that are slowly drip-fed to the player. The color variations are a nice touch, but if you want to perform at your absolute best and take advantage of the war-torn landscape, you’re going to want to tone down the bright colors.

Many of the battlefields that make up Battlefield V’s eight maps multiplayer offering offer a subdued color palette that’s easy to lose track of enemy fatigue can easily lay down amongst the rocks and rubble to be practically invisible when you’re quickly scanning the horizon for incoming attacks. Because of this, I found myself more interested in the higher contrast levels where enemies can be spotted at a greater distance such as Twisted Steel or the snowy peaks of Fjell 652. The different maps each have a unique feel to each other that separates them from one another, but it feels a bit light for a title that’s scrapped most of its single-player content to focus on multiplayer. 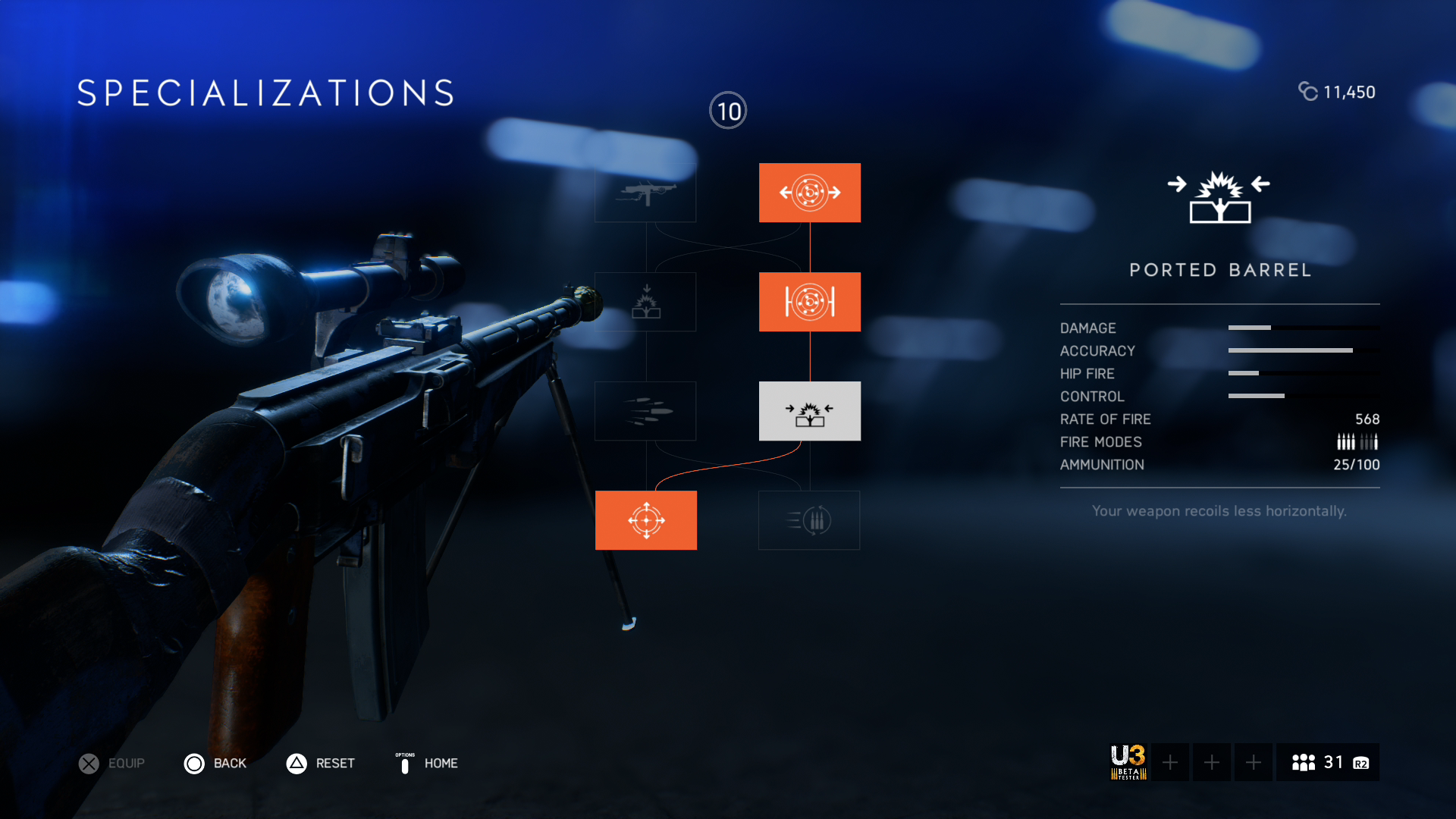 The moment to moment combat in Battlefield V is still just as exciting as in Battlefield 1, with a constant tug-of-war between both sides as they fight over capturing outposts and bleeding the enemy team out of respawn tickets. The various maps that makeup Battlefield V’s roster can be played across a number of different modes: Conquest, the typical capture-and-hold battle of attrition, infantry-focused Team Deathmatch, Breakthrough and Frontlines that each move the line of scrimmage back and forth, and their main focus, Grand Operations that combines these various modes into a multi-day conflict spread out across a number of days (although only half of the maps are used for this mode. No matter which mode you play, each offers an adrenaline rush that kicks in when you squad finally breaks the enemy lines and captures the last crucial flag moments. So many matches come down to single digit differences that make most matches feel like nail-biters all the way through a twenty-minute session.

For whatever reason, the character animations in Battlefield V have a tendency to be uncooperative when you least expect it. As medics can’t lie prone and revive a teammate, you are forced into a crouching position to get a teammate back into fighting shape. This leads to sticking your head out of cover and into a sniper’s crosshairs all too often. Mounted guns are another constant source of frustration for me in Battlefield V. As a player that relies on iron sights to line up suppressing machine gun fire, having the guns glitch out and not line up with the camera has been a common occurrence on some maps that not even exiting/re-entering the vehicle can fix. In much rarer instances, I found the same thing happening with my soldier’s primary weapon though a quick death usually sorts that out. 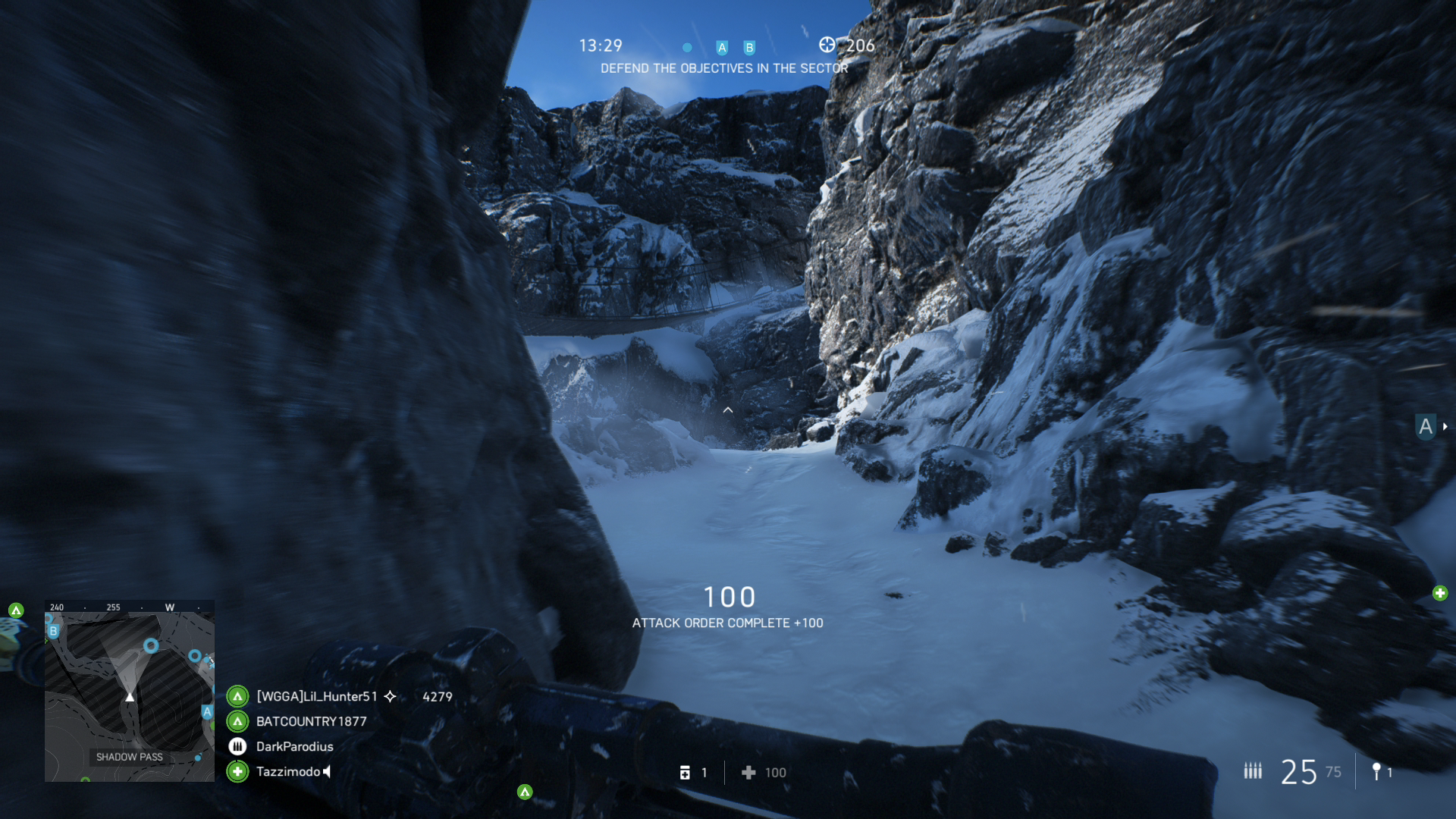 Even on the PlayStation 4 Pro which is admittedly the weakest of the lineup against the Xbox One X and PC, Battlefield V is still a stunning piece of tech. Between the sweeping landscapes both before and after a wave of destruction rolls through and the moment-to-moment action, I was constantly impressed with the level of fidelity that EA’s Frostbite engine can still produce. When the glitches subsided and I could take a brief moment to revel in the natural splendor before the next wave of attackers arrived on my doorstep, I could find awe in the sprawling scenery as far as the eye can see. Even in motion, the environments still hold up quite well (at least, until a bombing run blows them apart!).

In fact, there’s a whole laundry list of other glitches and bugs that still persist after the first major patch that hit the PlayStation 4 build of Battlefield V. Everything from not unlocking an upgrade for a weapon that’s leveled up to being unable to spawn into the second seat of a squad mate’s vehicle have hit me on numerous occasions. These are all minor in the grand scope of war, but to have them happen with such frequency and severity makes me question whether Battlefield V was ready for market. With any luck, players should start to see many of these glitches get resolved with day one patches and their Tides of War roadmap, but part of me feels like this one should’ve spent just a little more time in the developmental oven and baked in a golden seal of quality instead of passing this Holiday release off as an appetizer with a few lumps left in.

In its current state, Battlefield V isn’t yet all that it can be. With their take on Battle Royale launching in March and other main parts of the game dropping in incremental updates between now and then, one has to wonder if Battlefield V was rushed to meet the holiday rush and join the allied forces of Call of Duty and other top holiday titles. That being said, Battlefield V certainly shows potential and has the framework already in place for more content, be it more cosmetics, maps, guns, or other surprises that we haven’t seen before in a Battlefield game. It may not be my favorite shooter of the year, but Battlefield V still offers some of the most satisfying, grand scale FPS fights of any shooter on a console.

As one of the best looking FPS on the market, nothing else can compete with the destruction and visual assault of Battlefield V. However, this great war stands incomplete with many features not yet available at launch.