We told you about a coupon code for Aukey charging products awhile back, and in that I said I wanted to see what their products could actually do aside from what the specs and Amazon reviews say. So we have here three of their products to test to see if they do indeed meet their claims and actually can charge devices that much faster. The most important question I'd also like to answer is whether the variable voltage and amperage provided by Qualcomm's Quick Charge platform has any perceived effect or benefit for non-Qualcomm based devices.

Testing the claims of Qualcomm's Quick Charge 2.0 Platform with Aukey

Qualcomm Quick Charge is a specification borne from the need to address the commonplace and ever important issue of battery life. Increasing maximum battery life of the device itself would be the most ideal solution, however that isn't necessarily an easy task as adding more battery life usually means having larger capacity batteries that inevitably are also physically larger, resulting in a thicker phone. A trait that isn't desired in the mobile space. New and emerging technologies in the battery space are on the horizon, though aren't currently being seeded into the market quite yet. We hadn't had new battery technology on the market for nearly 40 years. The lithium-ion concept has been with us since the 70's. Thus, an interim solution has been created; the ability to charge your phone faster.

The idea of Quick Charge 2.0 is that you'll only have to remain at a place of charging for very small amounts of time for an appreciable charge. It does this not with the use of sorcery, but instead by leveraging higher current and voltage levels in order to charge your devices battery much faster. Current battery technology has a point of diminishing returns for charging speed, faster doesn’t always mean better for battery longevity.

Most older (and even some newer) chargers are specified to allow for a maximum current of around ~2A at voltages that generally don’t exceed 5V by very much. For example, the iPad Mini charger outputs 2.1A at 5.1V. This already allows for a somewhat quick charging platform, but it still isn’t nearly at the limit of how fast most modern batteries can charge at.

Laptops too are limited in how much power they can conceivably push through the USB port by the actual USB standard itself. Despite the ‘quick charge’ claims of many USB 3.0 ports, it’s only able to support a maximum of 1.5A anyway.

Qualcomm Quick Charge 2.0 can do just enough more to make a substantial difference. Up to 3A into 12V is enough to increase the speed of charging by enough to actually matter. The claim is that charging asked can be increased by up to 75% when paired with the right hardware.

Aukey takes this one step further by adding a smart element to it. They call this AIPower, which uses an IC that’s able to identify what device you’ve plugged in based on what it reads from the battery and thus adjust according to its specifications. If the full shebang of current is safe according to the battery (batteries are smart these days you know), then it’ll supply as much as it can.

This little marvel is a beautiful designed slim external battery pack with a simplistic matte black exterior with two USB ports for charging devices on one end, a button for power along one side and a micro-USB for charging the battery itself on the other side. It's subtly gorgeous. The entire unit is hefty and feels well-built in the hand. It certainly feels durable, though I wouldn’t recommend using it as a hammer though. On the face the Aukey logo lights up to indicate the battery level, pulsating when charging. Press the power button and it’ll light-up briefly with the corresponding color.

It's important to note that this is an officially authorized and qualified Qualcomm Quick Charge 2.0 device. Some chargers or battery packs may advertise a higher than usual current output, but to what end? And are they using guidelines that are considered safe? 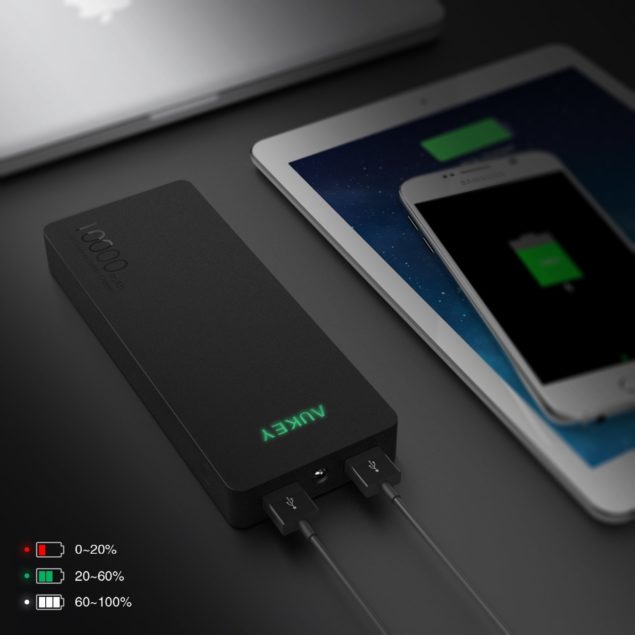 There is also a nice single LED flashlight just in case you need to light up the world to find your dropped phone you accidentally threw on the floor in an excited fit of dancing. It’s oddly bright and pretty useful. Just hold the power button to

It’s capable of providing up to 2.4A of power for any Quick Charge 2.0 enabled device and of course can switch to the applicable current needs of the device plugged in. It can supply two devices with up to the full amount, which means it can output 20W total for quite some time. One would think 10,000mAh wouldn’t last too long with two devices pulling the maximum current. You’d be mostly right, except that it of course depends on the size of the receiving devices battery. Because of very low loss of energy due in the way of heat and other ways, it can charge two devices with up to 5,000mAh. As an example, with an iPad Mini 2 and an iPhone 5S both charging, they charged to full with just a little battery life to spare. 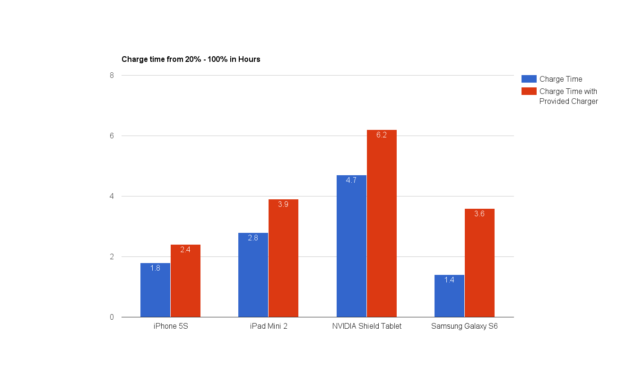 Charge time is obviously better with Quick Charge 2.0 enabled devices, of which I didn’t necessarily have many on hand to test, though I was able to score a Samsung Galaxy S6 to truly put it to the test. The charger that comes with the S6 is actually already Quick Charge enabled, so to show the difference, I used the iPhone’s provided wall plug to charge the S6 for the second metric. The results speak very clearly for themselves. In the case of Quick Charge 2.0 enabled devices, though, exceeds our expectations by a tremendous amount.

External batteries can be quite useful in a lot of different situations. Perhaps you’re out and need a quick way to charge your device while on the move. Maybe you’re even at home, but sitting a little further away from the outlet than the cord will allow. Smaller might be more preferred, but even a larger brick of battery could be a workable solution, with a long enough cord you can just put the battery in your pocket/bag/purse/magical unicorn satchel as you go about your business.

Naturally that quick charging capability could extend easily over to a traditional wall plug, and of course it can.

The Aukey PA-U28 Quick Charge 2.0 is again an understated small matte black device with a single USB port for charging. Being QC 2.0, it's able to push more current through to charge devices faster, though oddly it's only able to provide 2A through that single port. That's enough, however, to give exactly the same charging times as the battery pack.

With the NVIDIA Shield Tablet plugged in, it was drawing the maximum of 18W as measured with a 'Conserve Insight' power meter. The interesting phenomenon was that it didn't seem to generate very much heat. Even after 2 hours of charging, the temperature of the outside of the device wasn't terrible. 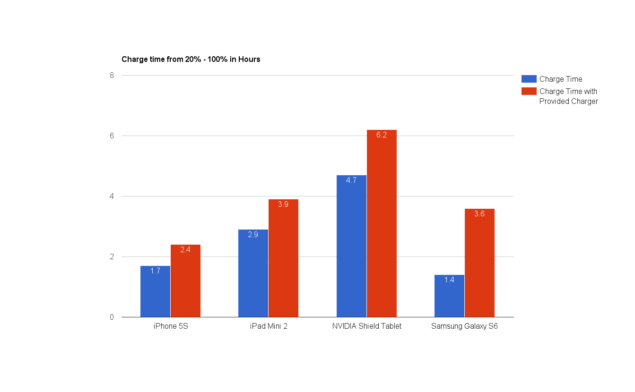 Even with less current flowing through it, the charge times seem to not be affected by that. Anything QC 2.0 should see similarly massive benefits in charge time. But why is this significant? Because it allows you get a usable amount of power by charging for only a small amount of time. You can have this diminutive little charger on hand with the rest of your gadgets, and use it when you have time to be up and running again. Power is time, time is money, right?

The Aukey is a great looking and good performing asset, and should be considered for the build quality alone. It has an understated look that and a price that belies its actual capabilities. I sought out to see whether other non Quick Charge 2.0 devices would be affected by the use of higher current, or if they could even take advantage of that, and it seems that indeed the benefits extend beyond just Qualcomm devices.