The smash hit anime, Attack on Titan, gets another fun adaption based on on the violent second season. Join the Cadets of the 104th as they keep the human race becoming Titan food.

You play a member of the 104th Cadets. A class of rookies soldiers trained to take on humanity’s ultimate foe, creepy naked giants with an unending hunger, Titans. Attack on Titan 2 runs more or less adjacent to Season 2 of the popular anime. As a player created soldier, you’ll essentially be Forrest Gump through some of the crucial events of the TV show standing in the background and occasionally chiming in with some dialogue options that may increase your relationship status with a lot of the key players.

Between each mission, the hub area where you can restock and upgrade will be populated with other Cadets from the show that you can rank up your relationship with them by simply approaching them. Aside from fleshing out some characters who typically don’t get much screen time in the anime, you’ll unlock passive skills for your Cadet if they end up liking what you say to them. Knowing a little a bit about the show definitely helps in figuring how to talk to certain characters. Ymir, for example, is more likely to bond with you if you’re a jerk while Mikasa is more no-nonsense.

While in town, you can take part of Scout Missions where you can grind out materials to upgrade your gear. More importantly, you can choose who can come along your missions if there are certain characters you prefer to build up a relationship with. You also learn little tidbits about the world at large that will help contextualize certain story missions. As Titans before more difficult to fight, being able to use your three squadmates effectively can make short work of even the most dangerous foes.

I was happy that to see that your hero isn’t treated like ‘Background Cadet 2.’ Your Cadet’s antics run adjacent to season 2 of Attack on Titan 2. You'll sit through familiar plot points you've seen on the show simply from a different perspective.

Attack on Titan 2 does a decent job of replicating the sense of speed you’ve seen in the show especially when zipping around with your ODM gear. The improved Titan AI will make use of the better mobility. Titans can set their sights on you if you remain in their vision too long.  I love that when this happens, the screen turns red and really highlights how deadly Titans can be when they are completely hyper-focused on eating you alive.

Even with the improved ODM movement, you’ll get hung up on some environments and a lot of the time, the camera just can’t keep up with how fast you’re darting around. One common problem I ran into was when locking on-to a Titan while also trying to avoid their massive limbs actively swatting you out of the sky. At its best, you’ll circle the Titan and take out its leg in a targeted attack or even command someone in your squad to take out the Titan’s Nape (a weak spot located on the back on their neck). At its worst, you’ll get stuck dangling off the side of the building as you figure out how to get back on the rooftops.

As a squad leader, you’ll be able to send your comrades to target specific titan body parts by simply hitting an assigned shortcut on the d-pad. Depending on who’s in your unit, your buddy uses utility abilities like dropping a flashbang which will stun your prey which you can then follow up with another squad member to help hack off one of the giant’s limbs. Once you figure out the combat flow of a Titan encounter you can make relatively short work of the man-eating monsters. The quicker you take down a Titan, the better the post-mission rewards.

The omnidirectional mobility gear (ODM) got a sufficient upgrade in Attack on Titan 2. Traversing the landscape is one of more enjoyable elements of the franchise….when it works. It takes a while to get a feel using the ODM to the point where you feel like your moving around like Spider-Man. Early on, prepare to hit the ground often, awkwardly hovering a foot or two off the ground.

If you had your fill of the misadventures of the 104th Cadets, you can take the action online in a spectacularly chaotic 4v4 mode where two teams compete against each and see who can take out the most number of Titans within a time limit. Friends can also join you in Scout and Story missions if you are having difficulty in the later stages. I would recommend on holding off on Co-Op since I found that you can pretty easily steamroll through the game with a buddy, even more so if they have fully upgraded pairing blades.

If you love the Attack on Titan anime, the perspective of a fresh-faced Cadet is something I think fans would enjoy. If you saw Season 2, don’t expect to be surprised or learn anything you didn’t see before, anyway.  The visuals of Attack on Titan 2, though, sadly never come close to being as visually striking as the TV show. Even so, the developers still managed to capture a lot of the graphic violence and destruction that comes from tangoing with a Titan. The core gameplay mechanic of chopping down endless numbers of Titans never gets old even if the controls have a tendency of flinging you to places you don't want to go.

Reviewed on PlayStation 4. You can purchase the game via Amazon for PlayStation 4, Xbox One and Nintendo Switch. 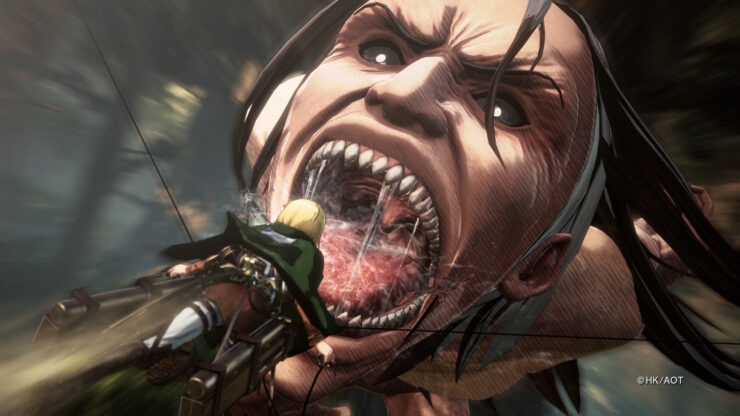 Attack on Titan 2 has an action-packed campaign that fans of the show will enjoy along with a pretty fun multiplayer mode, even if does look a bit outdated and the traversal system can prove to be more challenging than taking down a Titan.