The Ultrabook which is seen as an ultra portable notebook  has been designed by chip giant Intel to approach power users who want higher battery times without compromising on performance. Intel specifically uses its low power Core series processors coupled with fast SSD's which not only offers faster performance but also provide longer battery times.

The ASUS Zenbook UX13W we have for review today is powered by the first-generation Huron River platform for Ultrabooks, recently replaced by the Chief River platform. Continue reading onward to learn about the design and know how the Zenbook performs in our review:

The Zenbook arrived at my doorstep in a relatively large package. Inside its rectangular box packaging was a neatly packed Ultrabook that really makes you think it has come out of a place of Zen. The packaging is of a matte finish look with all the necessary manuals and accessories neatly packed underneath the Ultrabook hidden from view. 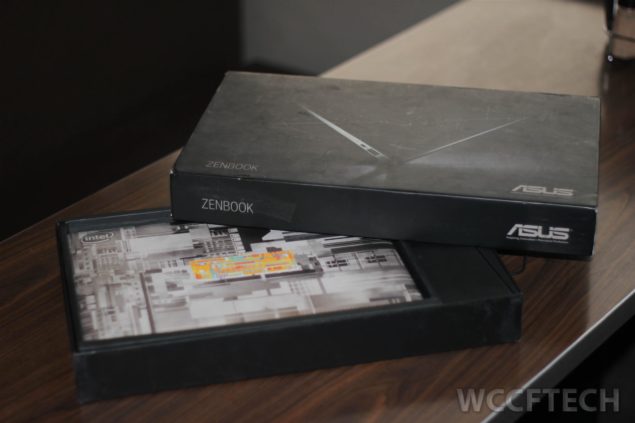 The bundled accessories that came with the Zenbook UX31E are a DisplayPort to VGA adapter, LAN to USB connector, an LCD cleaning cloth, an ASUS branded magic cable tie, instruction manuals, AC charging adapter, a couple of stickers and the most striking thing is a leather case Ultrabook cover with the ASUS logo embossed on its flap. 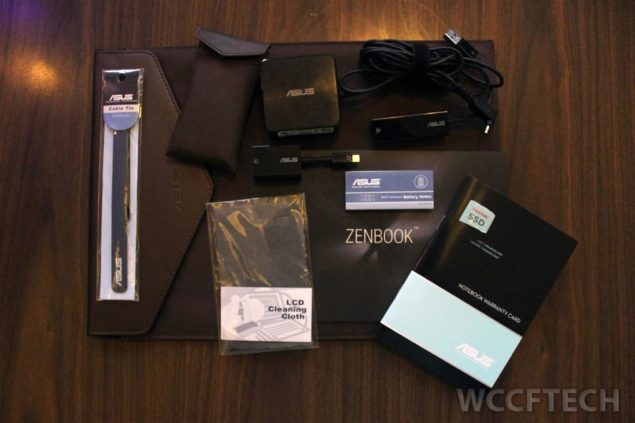 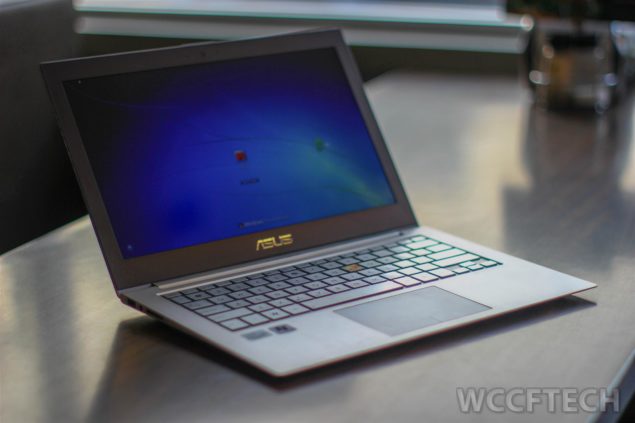 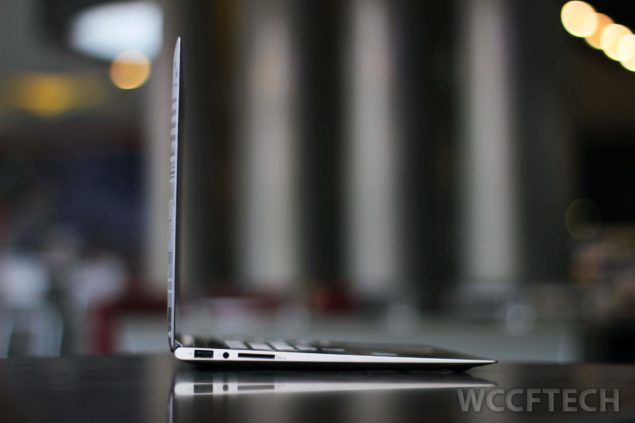 The looks do give you the impression of an Ultrabook that costs around a 1000 USD easily. But then again no backlit keyboard makes it look more of a bummer in low light areas. The mousepad has a small line drawn in between at the bottom roughly a quarter in length that differentiates both the left and right click of the cursor. 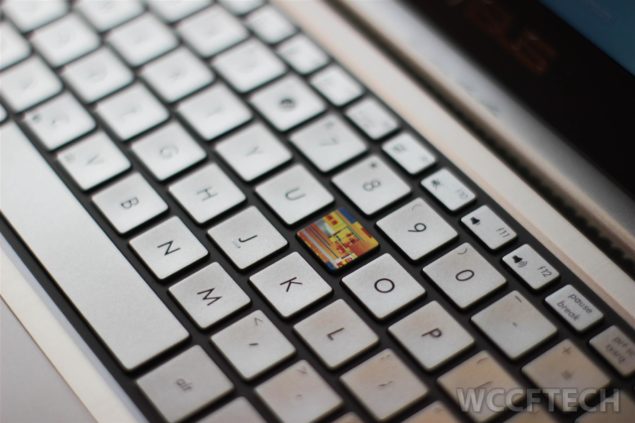 Notably, the ‘I’ on the keyboard has a context of an Intel CPU die imprinted on it, showing that it is indeed an Intel product (I wonder for those looking around for the ‘I’ letter on their respective Ultrabooks). 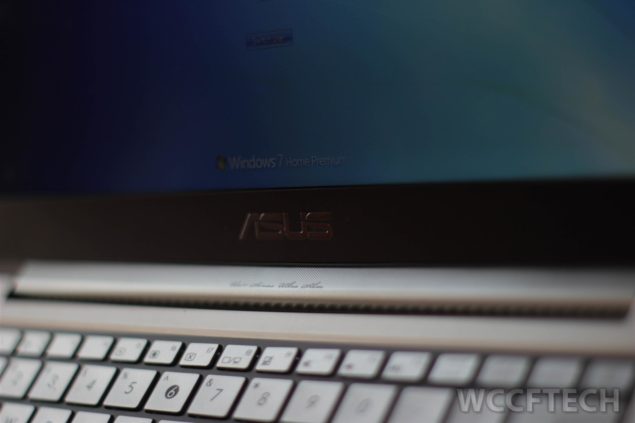 The speakers have been encased in the hinge that joins the display to the rest of the Zenbook. They even wrote ‘UX31 Series Ultra Slim’ on top of it in a rather unattractive yet boring font. Never the less, it doesn’t spoil the overall looks of the Zenbook’s beauty.

The ASUS Zenbook UX31E is powered by an Intel Core i5 2557M second generation dual core processor that is based on the 32nm Sandy Bridge architecture with four logical threads and a 3MB L3 cache. The i5 2557M runs at base clock of 1.70 GHz that throttles down to 800 MHz in idle mode. The power consumption of the mobile chip being a low voltage chip is rated 17W TDP. The chipset on the Zenbook is a QS67 PCH while the CPU socket is an 988B rPGA package.

ASUS ships their Zenbook with a 4 GB DDR3 dual channel memory configuration (2 x 2GB) clocked at 1333 MHz. Visuals are powered by an onboard CPU Intel HD 3000 IGP (Integrated Graphics Processor) that is a GT2 level GPU chip, capable enough to handle HD video playback and the usual casual gaming. Specs wise, the HD 3000 IGP has 12 Unified shaders running at 350 MHz and a 128-bit memory with bandwidth of 21.3 GB/s that operates at 667 MHz. 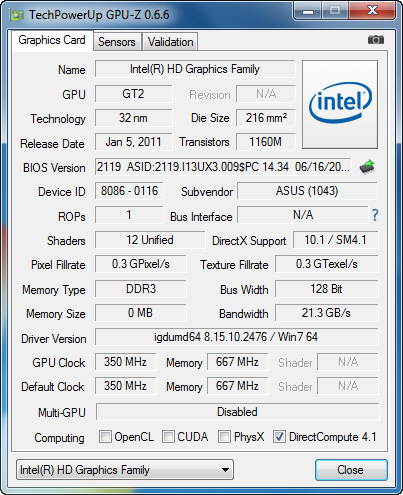 With these specs, the ASUS Zenbook UX31E managed to score 5.8 in Windows Experience Index.

The ASUS Zenbook being a light weight Ultrabook, does not heat up like normal notebooks that can be found on the market. Under full load, the temperatures maintain themselves under 50C thanks to ASUS’s internally built an efficient heat sink design. Under normal usage, the temperatures hovered around the 40-45C mark with the ambient temperature at a respectable 17C. 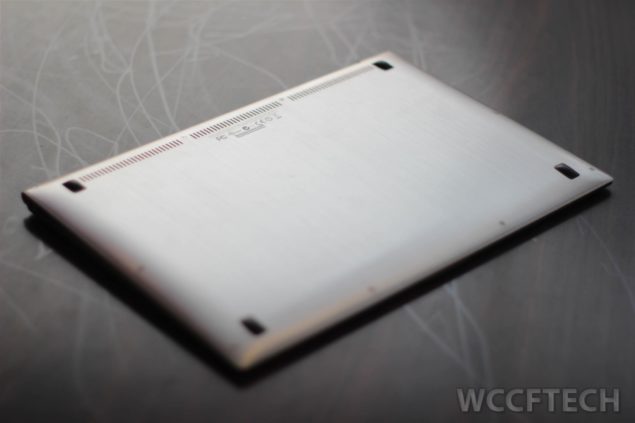 The ASUS Zenbook boasts a 13.3” widescreen (16:9) LED backlight display. The LED display features a an impressive resolution of 1600x900 compared to 1366x768 found on most modern notebooks and yet on a downside, comes with a glossy screen design. 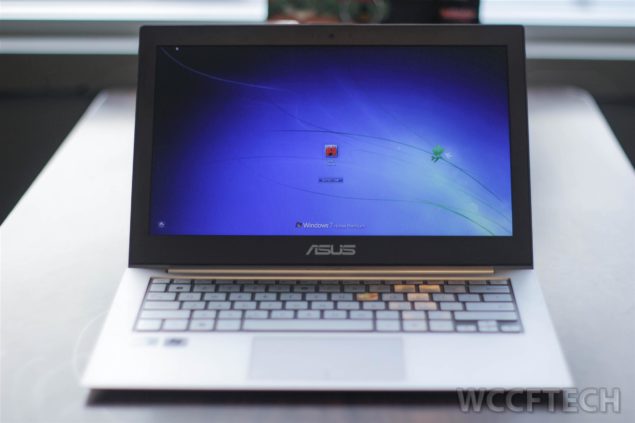 On the top of the screen, etched in the middle is a VGA webcam with a maximum resolution of 640x480 (say bye bye to sharp image quality while Skyping with your mates). ASUS could have at least shipped a better quality webcam with the Zenbook for the price tag they are asking.

Audiophiles would however be delighted with the onboard audio speakers by Bang and Olufsen ICEpower, providing rich and high quality sound compared to other laptop speakers. Their size is also much smaller compared to other high quality speakers. There’s also a headphone and microphone jacks on the side of the Zenbook for users who prefer to use it with other 3.5 mm jack applications.

For performance evaluation, we used a wide range of benchmarks (Synthetic, Gaming) which can be seen below:

The Zenbook was able to manage a score of 3307 in PCMark 7 along with a battery lifetime score of 145 marks.

The Zenbook scored 1636 Marks in 3DMark Vantage performance evaluation. The CPU scored 6568 while GPU score was set at 1222 Marks.

With a 64-bit Windows installed, we had to use the Winrar 64-bit version to evaluate the CPU performance. In Multi-threaded test, the Zenbook managed a max speed of 1798 KB/s and 587 in Single-threaded performance.

Multi-threaded performance in Cinebench R11.5 resulted in a score of 2.46 points and a Single-Threaded score of 0.96 points. OpenGL render test averaged at 9.49 Frames per second. 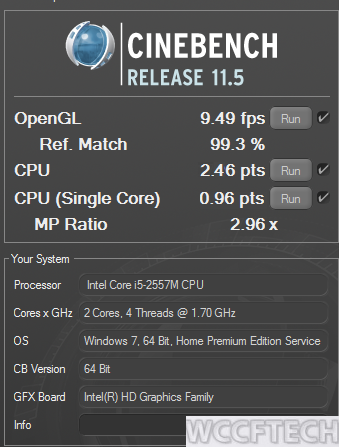 The ATTO Disk Benchmark results came as a surprise with the SanDisk U100 Solid-State Drive providing a Write speeds of over 250 MB/s average and Read speeds going past 450 MB/s on average and 500 MB/s max transfer speeds. Equipping the Zenbook with an SSD solution seems to have been the best choice which makes it load anything faster you throw at it. 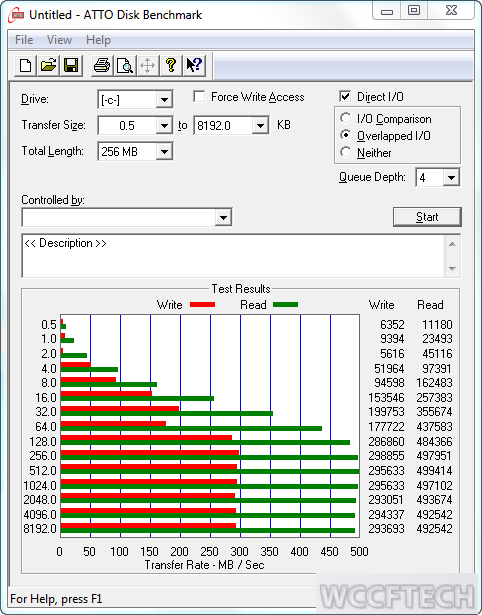 In HDTune, the SanDisk U100 SSD managed to score an average Read transfer rate of 300 MB/s with a random access time of 0.374 ms. 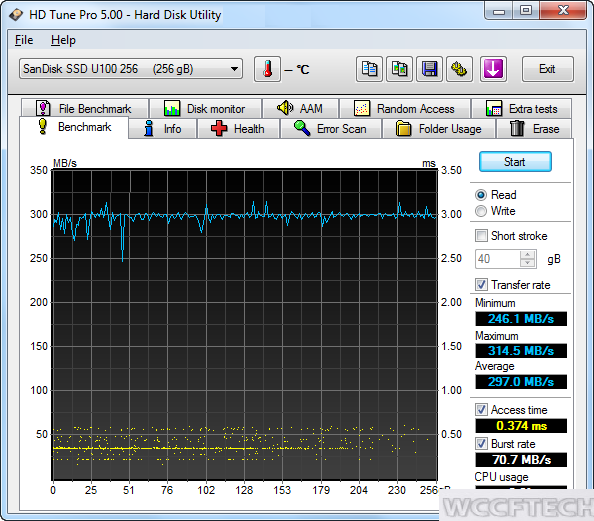 Arranged in the standard QWERTY format, the keyboard is sleek and the keys are comfortable to use however they are not backlit giving users a hard time to navigate in darker places. I also noticed that the keys failed to register when pressed quite a lot of times. 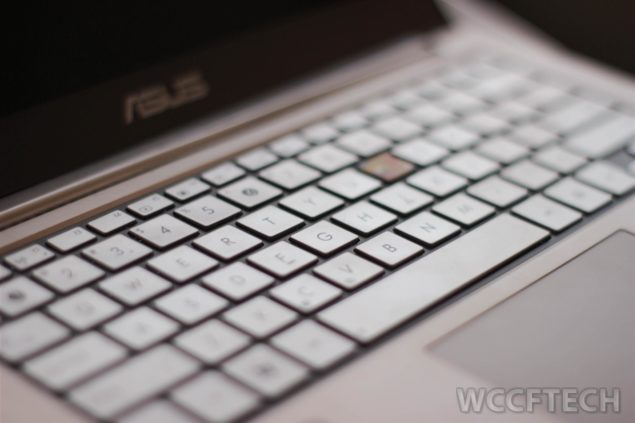 The capacitive touchpad has a similar story. ASUS equips the Zenbook UX31E with a glass touch pad which feels great but is accompanied by lag and the gesture isn’t addressed properly. Scrolling up and down with two fingers is smooth but navigating Windows Flip3D and highlighting multiple files and folders had yet failed miserably. 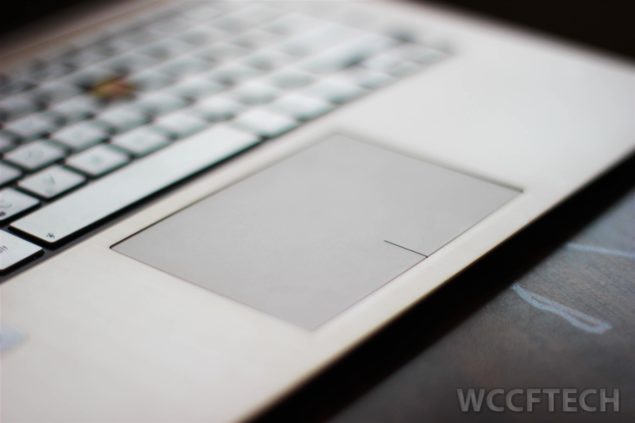 The ASUS Zenbook UX31E comes with a variety of input and output options but has been limited to an extent due to its slim form factor. Besides the Keyboard and Touchpad which we have detailed above, the UX31E offers display output through a mini VGA and mini HDMI port. Right next to both outputs is a single USB 3.0 port and the power socket. The power socket could interfere with a few USB sticks and devices although my Kingston drive plugged into the slot easily without interfering with the power connector. 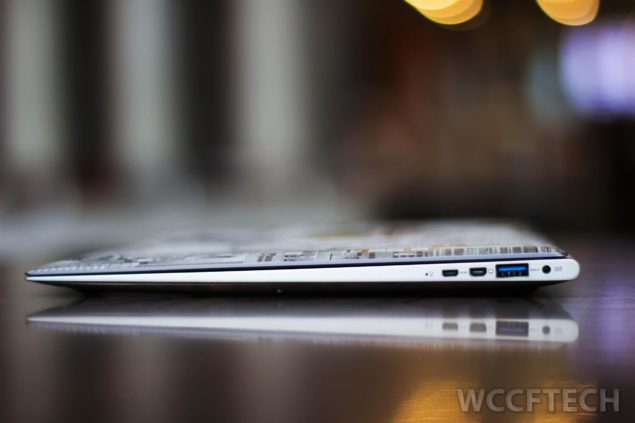 On the other side, the Ultrabook offers a USB 2.0 port, Headphone-Out Jack (audio in combo) and a 4 in 1 card reader (SD/SDHC/SDXC/MMC). The Ultrabook is shipped with a mini-HDMI to VGA connector and an USB to LAN device. For connectivity, ASUS integrates the UX31E with Integrated 802.11 wireless and Built in Bluetooth V4.0. 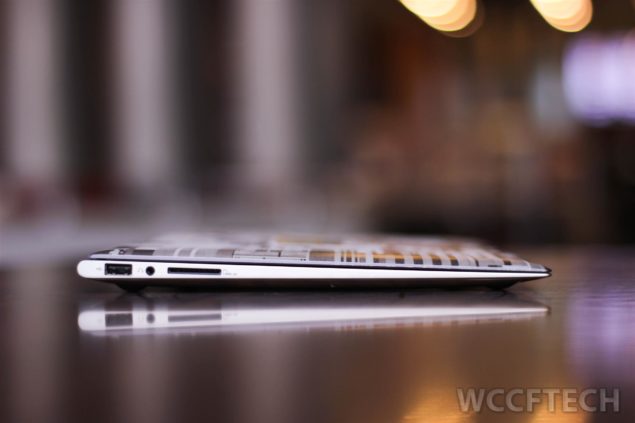 The Zenbook from ASUS performs well and looks gorgeous, delivering hours of battery life for any user workload. Aside from the few issues we faced while using the touchpad, the Zenbook ran noticeably better compared to other laptops.

Considering its price which is around the $1000 range, the Zenbook would be a valuable addition for business and casual users. Although the games we tested were playable, but for those who indulge hardcore gaming would have to look for other options such as Alienware, etc.