Ary and the Secret of Seasons

A single press of a button turns a giant lake into a frozen pathway. Dry riverbeds become gushing streams, icy towns become tropical hotspots, and the weather is always up to you. This is the central mechanic at the core of Ary and the Secret of Seasons: changing the seasons themselves, and the landscape around you. When this works, it is incredible. Seeing an iced-over town filled with freezing inhabitants become a summer paradise is amazing, especially when you can do it in small, centralized locations just by pressing a single button. And if the whole game was that impressive, it would be essential. Alas…

Ary and the Secret of Seasons is an adventure platformer that will see you journey through four distinct lands, each home to ancient golems that control the seasons. Something has gone awry, evil crystals are harming the golems' strength, and the weather has been sent haywire. Your job is to travel the world, avenge your brother, and solve the global weather crisis.

When Ary's weather changing mechanics are put to the test, the game cannot fail to put a smile on your face. You'll be changing the landscape of the world around you, melting down ice blocking your path, creating new ice pillars to use as platforms, unveiling waterlogged valleys which are only filled during Autumn, and much more. This mechanic is enhanced by certain stones which freeze a season in place, and moving these stones is key to puzzles. Later you even get a slingshot that can change the season in a localized place, which you can use to solve puzzles and open up paths. This is a great mechanic, and the fact that the seasons and landscape can change so dynamically is a genius idea, used really well in places.

The dungeons are where this game shines. Dungeons are usually fairly linear Zelda-inspired experiences which will see you changing the season to open doors, moving key items through rooms, and fighting off a whole bunch of smaller enemies. In these smaller areas, solving puzzles, the game really manages to hit a stride. It's a shame there's no dungeon map so you can navigate better, but other than that, these are a real highlight. The season-based mechanics are really interesting, and when you're shooting orbs of contained seasonal energy around the stage to activate different switches it feels really interesting. The first time you manage to summon a floating orb containing nothing but water, you will have a smile on your face.

But between the dungeons, there is a large, semi-open world area and it's the definition of tedious. You will quickly end up running straight past enemies and sidequests, beelining towards your main progression path. When wandering out in the open, there really isn't much to find. A few special collectibles sure, but almost every chest in the game only contains coins - and one chest I found even contained zero coins, just as some cheap joke I assume - and of course the only thing you can spend coins on is basic upgrades. There's no reason for anyone to be wandering around the world looking for extra things to collect or do because it's all so boring, and the achievement list seemingly confirms that the devs agree, given there is an achievement for finishing the game without playing a single sidequest.

The game does at least look nice on the surface with a really charming art style, but it constantly falls down flat on its face. I played the game on a PS4 Pro, and I could not believe the screen-tearing issues this game is plagued with. The game runs an unlocked framerate and caps out at 60FPS, but when it drops, it looks truly terrible. In snowy seasons snow and ice falls from the sky and flicks up at the camera. Combine it with that screen-tearing, and the game feels genuinely unpleasant to play at times.

Then there's the general lack of polish the entire game suffers from. I noticed minor animation bugs and glitches, visual problems such as severe Z-flickering, and a general rough presentation to, well, almost anything. The fact that the game looks so nice underneath it all is almost rendered to be a moot point when you keep seeing the same issues time and time again.

Ary and the Secret of Seasons isn't a particularly long game, but you are guaranteed to feel both impressed and frustrated before that time is over. There are moments where it looks truly wonderful and the puzzles feel smart, and then there are moments where you would rather be looking at anything other than this game. This isn't a bad game by any means, and a large part of me has a soft spot for Ary, but it's clear that this game needs a few patches and maybe a sale before I can start recommending it to people. 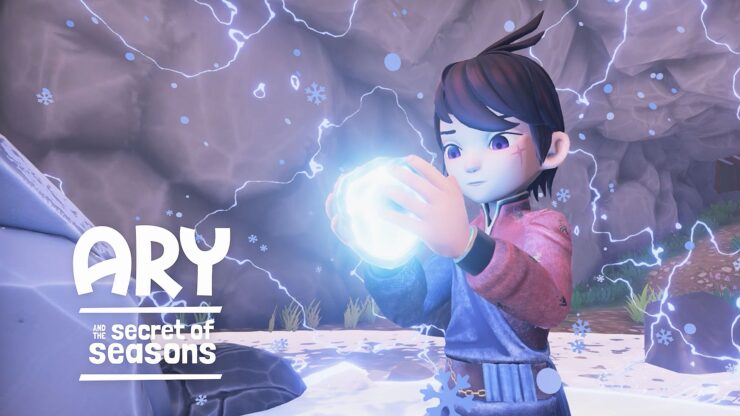 6
Wccftech Rating
Ary and the Secret of Seasons

Ary and the Secret of Seasons is a lovely looking game with some truly smart gameplay ideas, but all of that is plagued by screen-tearing, performance issues, animation bugs, and a general lack of polish in almost every aspect. After a few patches and a sale Ary could become someone's favourite game, but the fact it launched in this state is just a shame.