Arc of Alchemist (PS4) Review – A Wasteland of Potential

It's been some time since I last sat down with an RPG by Compile Heart and played it through until the end. I gave Death End re;Quest about a dozen hours before I grew tired of their signature turn-based combat. When I heard that their latest game, Arc of Alchemist, was going to opt for a hack-and-slash combat style, my interest perked up. However, as I learned after the first few hours, sometimes a new combat system isn't enough. I played through Arc of Alchemist not once but twice to bring you this full review, based upon the PlayStation 4 Pro version. 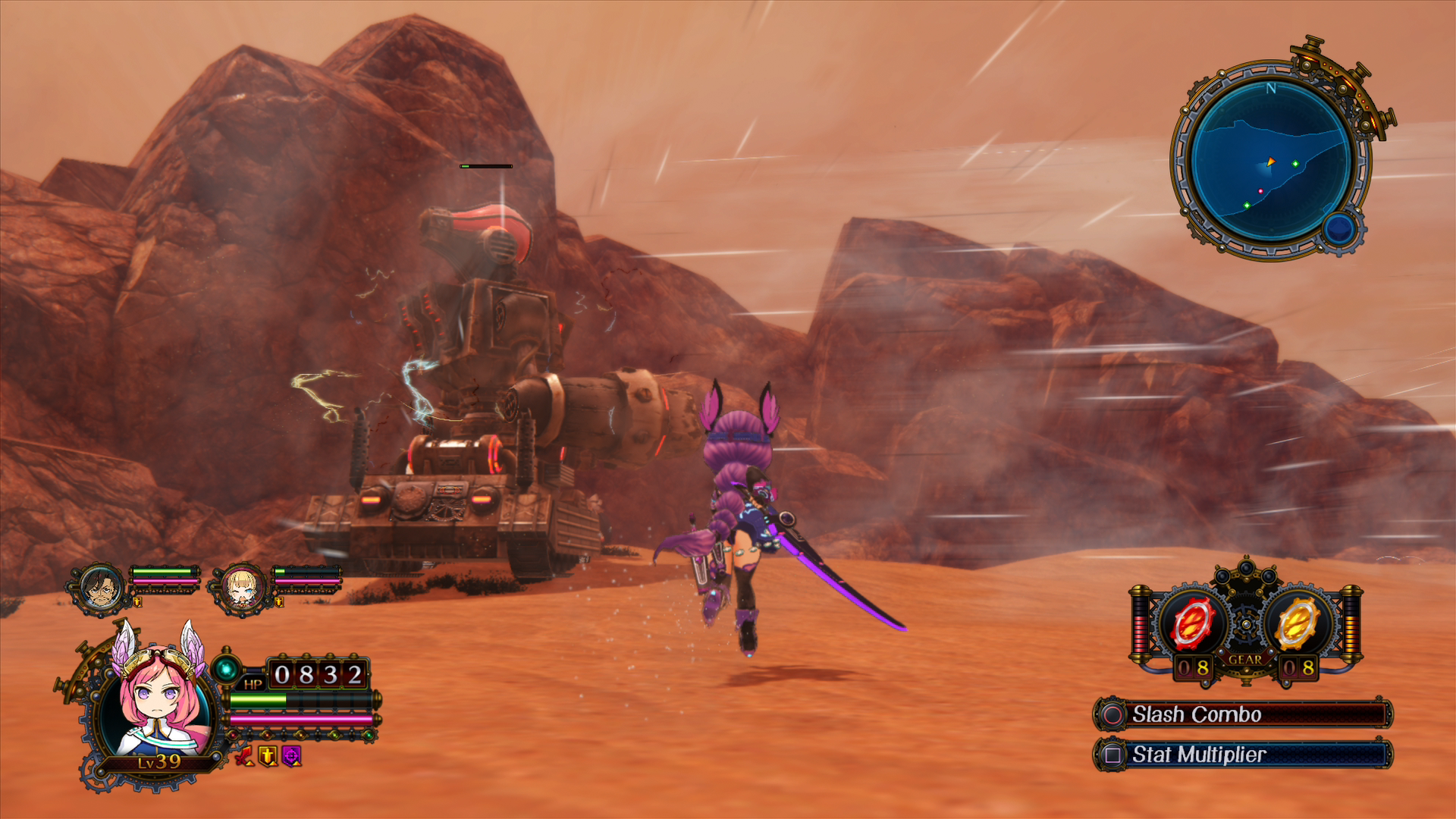 Arc of Alchemist opens in a wasteland as the young Quinn Bravesford, commander of a small retinue of soldiers (who despite their childlike appearances are all of legal age to be warfighters) and helming an expedition to find a rumored 'Great Power' that can save their barren world. This supposed 'Great Power' can only be activated by someone with the Lunagear and in possession of four elemental orbs. Conveniently enough, Quinn already has the necessary device and the first orb. Spoiler alert: the remaining three orbs all wind up in her possession with little to no effort at all.

To say the world of Arc of Alchemist is barren would be an understatement. Separated across five small-sized maps, Quinn's adventure follows a relatively straight line from event marker to event marker (if you've played a Neptunia title before, you should be familiar with these story flags randomly laid out across the area). Aside from Quinn's party of seven, who all join you from the onset, there are barely any other NPC's in the world to come across. Those that you do meet show up in visual novel styled story vignettes and disappear until the next event flag, only to have most of them join your party later on. There are no shopkeepers, unique enemies, foes with proper faces, or nigh anyone else save for Quinn's group of adventurers and an enemy group that seems to be adventuring in parallel to the player yet never engage them in direct combat.

Arc of Alchemist never draws on the strength of its story to weave a tale that's of any interest. What little story there is plays out in those brief story moments of visual novel chatter but save for one Uchikoshi-esque twist midway through, never really does anywhere. Despite a world that's on the brink of extinction, there are never any stakes that mean anything and Quinn's sole driving motivation is finding a reason to die most of the time. Any time you return back to the main base, there's a brief story gag with one or two of Quinn's troupe that feeds a little bit more into their character backstory but I never found any of the characters to be of any interest. 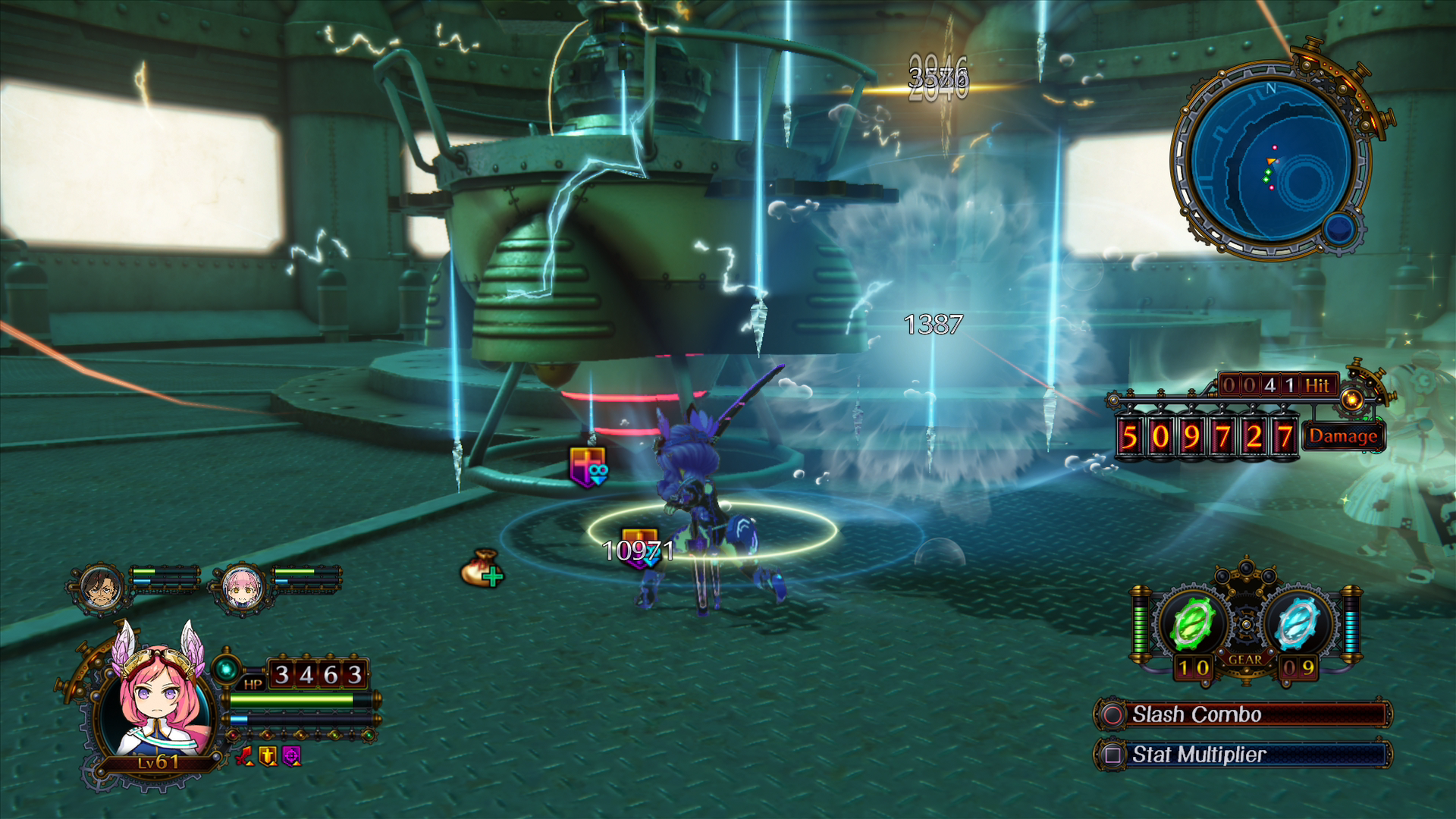 While the combat may have changed from turn-based to an active hack-and-slash style in Arc of Alchemist, the more I played this Idea Factory-published adventure, the more I missed the Neptunia style. At least that style of RPG had some depth to it. In Arc of Alchemist, each weapon is limited to two basic attacks (which are dependent not just upon the weapon type but which specific sword or staff is equipped). Beyond that, the player has a basic jump, dodge roll, and a very ineffective lock-on move that helps to put a band-aid on the otherwise atrocious camera controls in Arc of Alchemist. The Lunagear that Quinn wears has a minimal purpose when it comes to combat: the four elemental orbs she equips don't do much for combat but using a pair of them at once can drop a healing totem or activate a radar that detects loot stashes, among other things.

Even on higher difficulty levels, Arc of Alchemist never proves to be much of a challenge. The enemies that Quinn comes across are either insanely wimpy and go down with only a couple of hits or are so out of her league that an attack can cleave off half of her health. There's rarely any in-between and as such, Arc of Alchemist never really proves to have any real challenge. Any time that I ran into a fight that was remotely challenging (not counting the level 99 extra bosses randomly chilling around the world), a very small amount of grinding or investing in another weapon upgrade back at home base were all I needed to make the game a cakewalk once again. 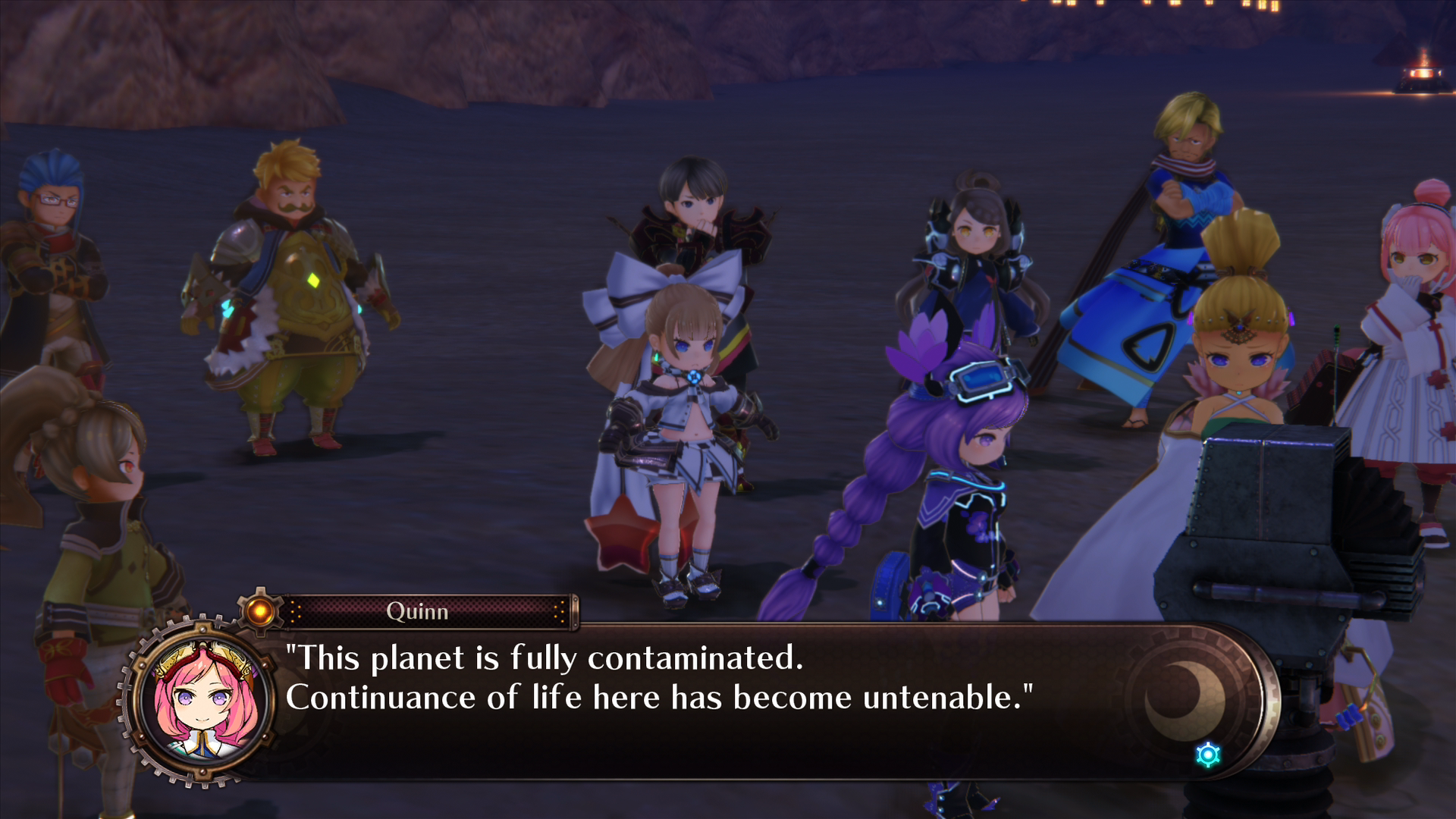 Often times, the grinding wouldn't even be intentional. Up until Quinn hits level 60, she gains a level roughly every couple of minutes without any real challenge. After that, there's only one specific miniboss that can be defeated that gives enough experience to level up (and because there are trophies to get Quinn's entire party to level 100, that was quite the grind to endure). There isn't any need to do this, as the final boss in Arc of Alchemist is a mere level 70 and barely a challenge on the hardest difficulty if you heal once in a while or dodge its energy attacks.

The main base that serves as Quinn's hub of operations is the only place where shops and upgrades exist. Here, Quinn can exchange monster parts and a small bit of money to upgrade the base's facilities. Each facility governs a small aspect of what the player can purchase at the only shop in the game, from additional levels of passive skills to weapons and armor to the consumable items that Quinn takes out on each expedition. There's a minor strategy to laying out the city base: each level of upgrade for a particular facility lets you place one more building of that type down. Laying four down in a square gives one bonus to the facility's level and laying them adjacent to certain other types also gives a similar bonus. It's a novel system but given how shallow the interpretation is, there's nothing that suggests the player can't just upgrade each facility to its maximum level rather than laying out the city properly. 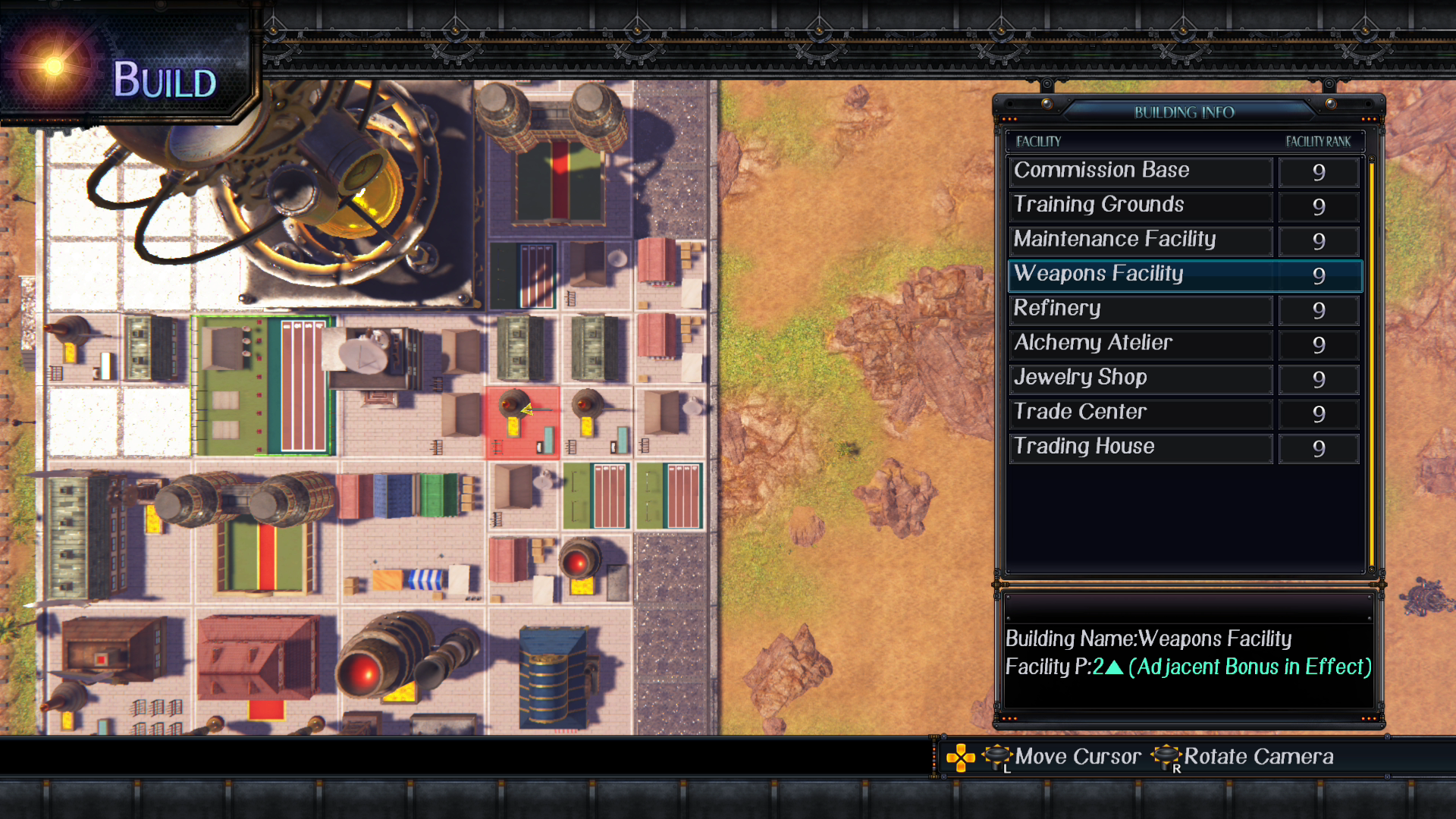 Aside from the weapons and armor that require cold hard cash to purchase, everything else in the home base of Arc of Alchemist takes a combination of money and loot drops gained either from glowing spots in the world or enemy drops. One of the major changes in the Western release of Arc of Alchemist is the drop rates on these items. If it weren't for gaining three or five times the items as the Japanese release, there would be an insane grind to just upgrade a facility to its next level.

The other big change from the Japanese release of Arc of Alchemist is the ability to play as any of the other party members besides Quinn Bravesford. This would be more notable if not for the fact that there's never any reason to. Quinn is proficient in any weapon type and can select (nearly) every passive skill from the training camp. Changing who you lead isn't a simple affair that you can do on the battlefield; this requires going back to the home base and rearranging your party to whoever you want to play as is in the first position. 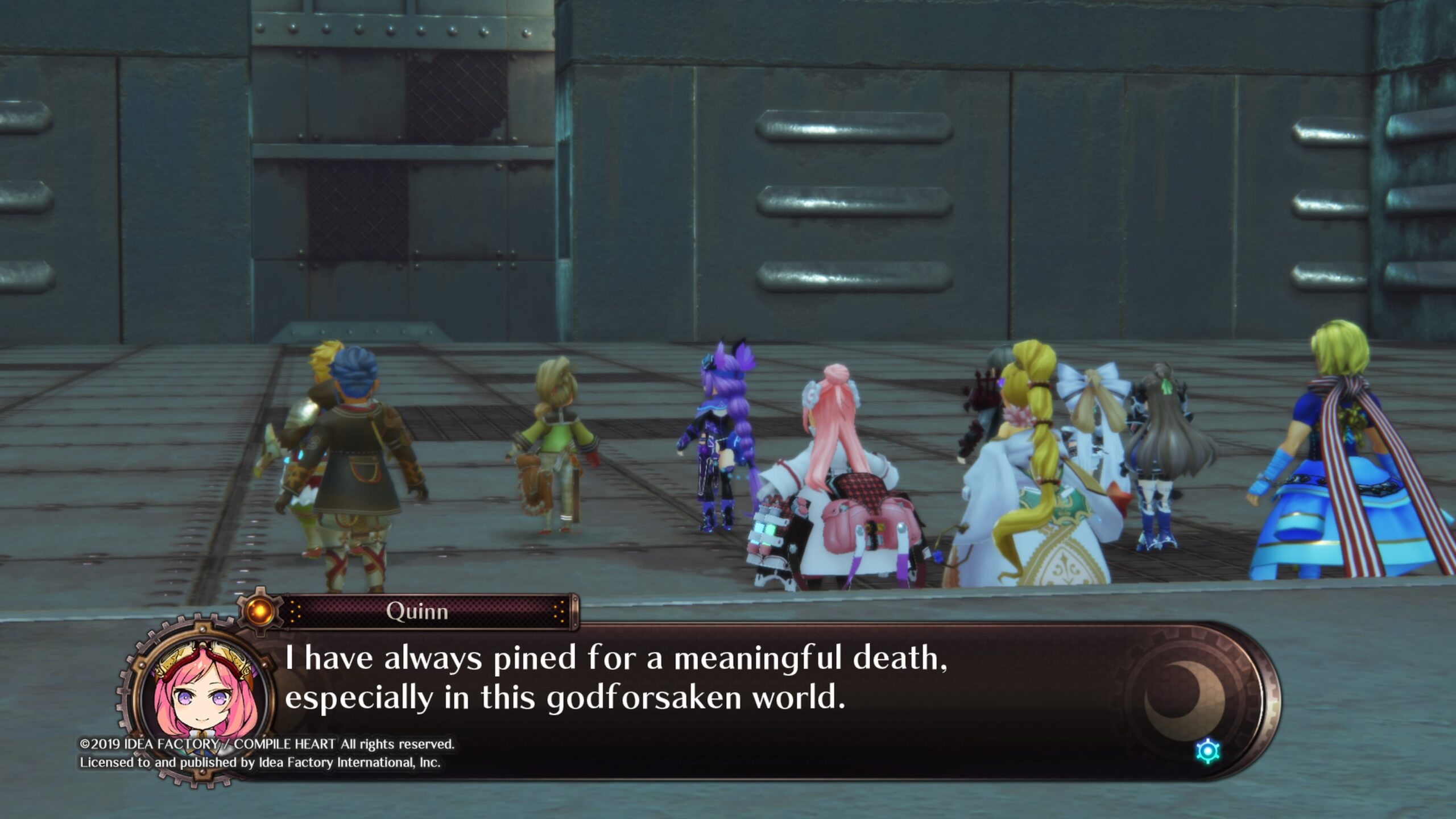 What I found most troublesome about Arc of Alchemist was in how little depth or consequence there is to anything in the game. The various systems at play to upgrade your characters or home base are rarely needed (except for the occasional weapon upgrade) and can otherwise be disregarded. The same goes for the addition of different playable characters in the Western release. With a runtime that barely clocks in over twelve hours (and an NG+ playthrough that barely took somewhere between four and five after skipping cutscenes), Arc of Alchemist thankfully doesn't last long enough to be a huge annoyance, but I still found myself wondering if this world was one worth saving even a few hours in. Arc of Alchemist might not be the worst RPG you could play to ring in the new decade, but I'd save this one for the PSN bargain sales if at all.

At only ten hours long, Arc of Alchemist won't waste much of your time. This wasteland has seen better days and couldn't come as recommended to any but the most ardent of Idea Factory fans.