Ape Out is a stylish, satisfying arcade game that is 2019's first perfect pick up and play game. Its simple action makes it incredibly easy to get to grips with, and with next to no loading screens, there is absolutely no downtime. In Ape Out, you are a gorilla murdering your way through a procedurally generated facility filled with gun-wielding enemies.

While the grindhouse style, with its washed out, analog film aesthetic might catch your attention, it’s the soundtrack that really keeps it. That's not to say the visuals aren't incredible, because they are, but the soundtrack is truly something else. While the Dairy Milk gorilla might be famous for its drumming skills, this primate’s taste is a little more enthusiastic.  Behind the game is an energetic jazz drum that matches the movement animation of the gorilla, and the vibe of the game perfectly. A crescendo erupts each time the player kills a guard but the jazz nature of the music means it always feels harmonious. It all blends so well and keeps your energy up as you sprint down strange and unfriendly corridors that it feels like the soundtrack was specifically made for you, rather than reacting to your movements, which is immensely satisfying as you destroy your way through the facility.

Like Hotline Miami, Ape Out is a game that is built to reward speed and feel amazing to play. Each enemy can be killed in one punch, leaving a satisfyingly gory patch where their body collided with something hard. There are no skill trees to study, or combos to master, keeping the game simple and easy to pick up. Each level even begins with a free kill, just to get the player in the right frame of mind. Other than sending guards flying, the gorilla can also pick them up to use as shields and thrown weapons if the other humans aren’t close enough to punch. It really gives you a sense of power from the gorilla as you stomp through the facility. While it only takes three bullets you reset your progress, the guards are even flimsier and openly fearful of you. A lot of the game is spent backtracking around a corner to lure the enemies into a trap, and you can see how slowly the humans approach in these situations. Or the way they ever so slightly step backward as you burst into the room they’re patrolling.

There isn’t really a scoring system or weapons system in Ape Out, but it doesn’t matter because the simple mechanics are everything you need to enjoy the game. While there is no one screen reward, the satisfaction that comes from keeping up a fast momentum is more rewarding than any scoring system could provide.

The levels themselves are relatively short but flow from one to the another gracefully. Each level introduces something new to the mix for the player to look out for. Early on an explosive enemy is introduced, before you level hazards are brought in to try and slow your progress. It's great fun encountering something new in the game and immediately trying to pulverize it. Even if it doesn’t work out great, the punishment for dying is taking you back to the start of the level. In fact death as a fun reward where it shows you the route you took and how close you got to the finish line.

But as I said earlier the game is randomly generated so there is no point in trying to learn the map. Although, its next to impossible to learn the map even as you are playing it. Ape Out is all about reaction and adapting to the situation. Bursting out a window into a huge open expanse filled with rifle-wielding guards is a death trap, so you must quickly try another route, or grab the closest enemy to use as a shield.

There isn’t much that could be improved in Ape Out. The design is simple and very well executed. The difficulty is challenging without ever feeling unfair or impossible, with bad runs quickly forgotten. If players are looking for something they can play with the tv on the background maybe this won’t appeal, as the sound design is so integral to the pacing and satisfaction, but that can hardly be called a negative. It can be a little fiddly using a mouse or joystick to aim melee attacks, but it is rarely more than a seconds inconvenience.

While Ape Out doesn’t exactly have much in the way of a story, the very first room paints enough of a picture to justify the player's bloodlust. And just when you think you’ve got the rhythm of the game sorted, Ape Out momentarily flips the colour palette, introduces new musical elements, or throws something new at you. This is a great game to pick up and play, without no need to memorize strategies, story details or combos. Like the mighty gorilla, it is powerful, elegant and a little dumb, but you would never say that to its face. 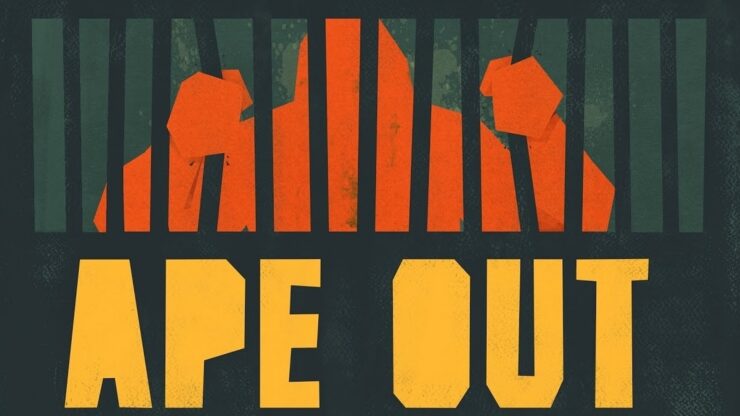 Ape Out is great if you've only got a few minutes or a few hours. Its simple design, constant excitement, and reward loop mean you can be satisfied with one turn or twenty.

The Riftbreaker Metal Terror DLC Review – More of the Same