APACER isn't new to the RGB scene when it comes to memory but their previous offering has been a bit on the flamboyant side of stylings.  Featuring wild cats and odd cuts on the diffusers they may have kept quite a few folks from being too interested, but their NOX lineup seems to be remedying that image.  APACER NOX RGB DDR4 uses unique ultra-wide angle RGB lighting effects featuring exquisitely carved lighting bar with natural, flowing RGB colors displayed in full view. NOX RGB DDR4 is certified by the software of major motherboard manufacturers such as ASUS AURA Sync, GIGABYTE RGB Fusion, MSI Mystic Light Sync, and ASRock Polychrome Sync. The RGB can be controlled to match your other RGB parts in your PC.

The APACER NOX RGB Kit comes in a simple package, not as ornate as some come shipped in, but all the pertinent information is available on the packaging and there are dual-window openings on the back revealing the memory specification stickers on the heatsink of each stick.  The memory has heat spreaders applied to both sides via a thermal adhesive, which is a bit of a downer since most kits in this range are fully surrounded and attached with some more secure methods, like screws.  But the overall design is rather understated with the exception of the large diffuser on top that adorns the NOX logo.

That top diffuser does a spectacular job diffusing the RGB LEDs and results in a very soft, yet bright, display of colors.  The fact that the color pattern can be seen from all angles explains what they meant by 'Ultra-wide Angle'. Software control functioned normally as one would expect when using the software on various motherboards, I tested them with MSI, Gigabyte, and Asus and none of the vendor's software had issues controlling the lighting.

NOX RGB DDR4 has passed compatibility certifications of most mainstream motherboard manufacturers, ensuring that the product can operate stably on the motherboards listed on QVL. In order to cater to the different needs of all gamers, single-channel and dual-channel packages are provided from 4GB to 32GB, as well as four different speed range options from the 2400 MHz 1.2 V of 16-16-16-36 to the 3200 MHz 1.35 V of 16-18-18-38.  While the ICs are stamped with APACER's logo and information, Thaiphoon Burner returns these as Samsung B-Die ICs which explains their excellent compatibility on even my 1st Gen Ryzen parts when testing. 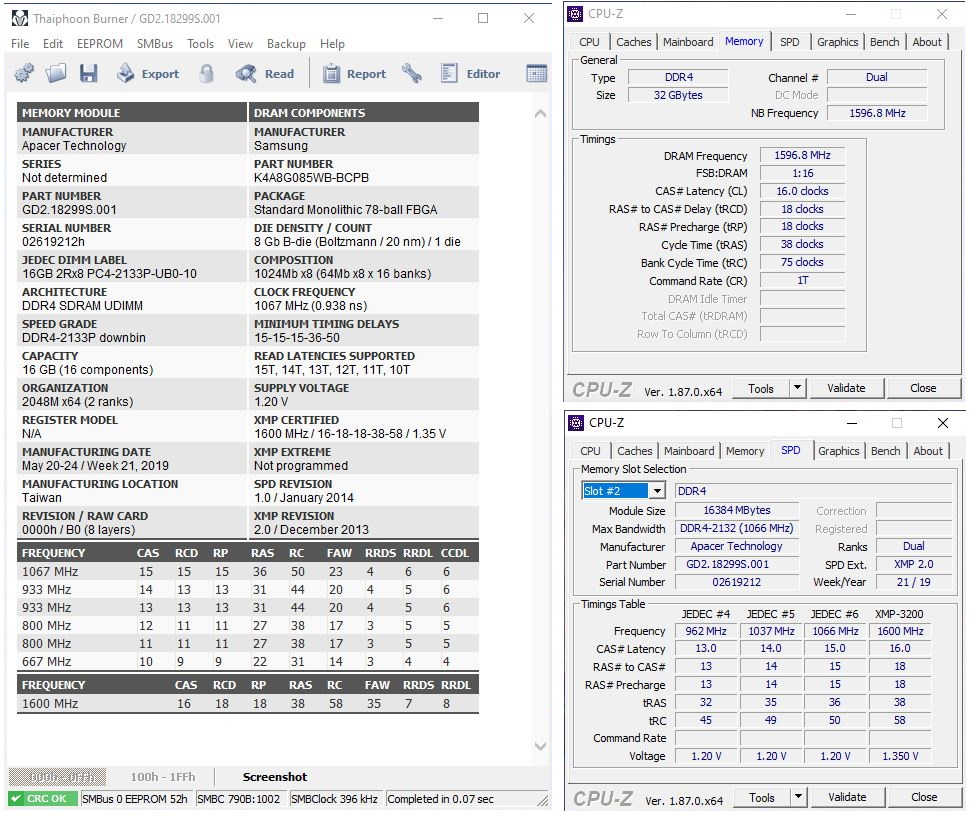 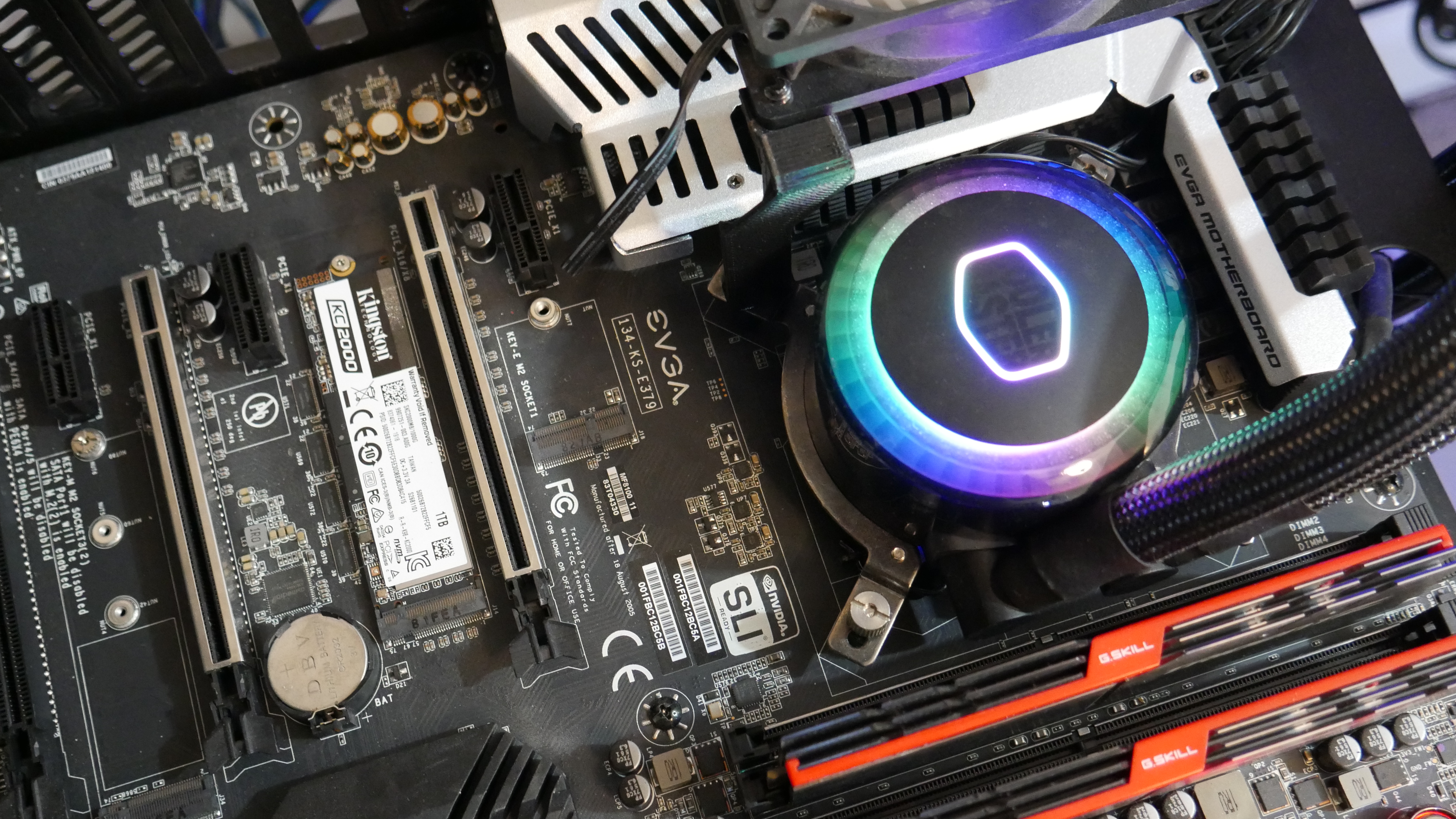 Much like the first time I published a review for storage I have access to limited hardware and had to develop a test suite for myself to use.  Because of that the testing is still growing and open to suggestions by the readers.  Right now we have a mix of Synthetic and Gaming benchmarks as I focus primarily on the PC Gaming angle with almost all hardware.  Something I wanted to explore as we go through the results is more than just the memory's XMP Profile performance as sometimes people run into issues running memory at it's maximum capacity, therefore I conducted a set of tests using the XMP Profile for rated speeds and timings, but then adjusted the frequency to see how the memory kits all performed at lower frequencies (and higher than XMP in the case of the Corsair Vengeance LPX kit).  Hopefully, that'll give readers a better idea of where the APACER NOX memory sits overall in terms of performance.

The ROG RealBench suite is a rather useful tool for measuring performance as it's built entirely out of open source applications that people use.  For this test, we took the results from the ROG RealBench Image Editing benchmark that uses GIMP to measure performance while loading and applying many changes to photos.  Needless to say, the results point out not much reason to be concerned with what memory you're using so long as you have enough. A great aspect of this benchmark is that it is readily available to everyone to try out and see where your system's performance lands for a point of comparison.

Rainbow 6 Siege is a highly competitive multiplayer shooter that has shown itself to be fairly CPU intensive, and memory performance is one aspect that can really help boost speeds in games that are CPU constrained.  This game proves this to be the case as well showing that there can exist up to and exceeding a 40FPS margin based on the memory speed. This was tested at 1080p Ultra Preset paired with an RTX 2080 Ti

All in all the APACER NOX 32GB DDR4 3200 is a great performer and offers excellent compatibility across all systems that were tested for stability but at an MSRP of $279.99 they outside of being priced competitively.  That said, if you find them at a similar price to competing kits of memory you'll find a very valid option.  The NOX kit of memory does everything it sets out to do, it looks good, works great, integrates seamlessly into the RGB ecosystem of the motherboards I tried it on.  It had no issues running at the XMP profile on any of the systems I tried it in, and that includes a 1st gen Ryzen 1600x, 1700, and 1800X on a B350 motherboard.  Overclocking seemed very limited as I only had success with either dropping the timings to DDR4 3200 14-14-14-38 at 1.35v or was able to increase it at stock timings to 3433 and maintain 1.35v, anything more required voltage to be increased substantially. The APACER NOX 32GB DDR4 3200 is a great kit of memory that is only marred by a high MSRP, but if you find it a comparable price however and it should be on your list of considerations.

The APACER NOX 32GB DDR4 3200 is a great kit of memory that is only marred by a high MSRP, but if you find it a comparable price however and it should be on your list of considerations.