Gigabyte is one of the top motherboard manufacturers and you all might have heard about their gaming sister-brand, AORUS. Since its inception, AORUS has been branching out into various other market categories and building a diverse catalog of products. Their strategy here is to offer a full range of products under a single AORUS brand. Currently, the AORUS brand was offering a wide variety of motherboards, graphics cards, gaming peripherals, and key PC components, all under the AORUS brand.

Talking about the PC components, the range included PSU and PC cases but at Computex 2018, Gigabyte showcased their AORUS branded RGB memory kits. We have seen a few graphics card manufacturers adding memory kits to their portfolios but this is the first motherboard maker to being going the memory route.

Since this is AORUS's very first memory product, they are initially going to offer a single memory 16 GB (Dual Channel) memory kit, the one which I am going to take a look at today. Now, most would say that the first memory kit is mostly a generic, lower-priced product but AORUS is taking a very different and unique approach with their first memory product which I will be looking at in detail in this review.

AORUS sent me their 16 GB RGB Memory kit for this review which I would like to thank them for!

The AORUS RGB Memory 16 GB DDR4 memory kit rocks some really good specifications based on the fact that it is AORUS's first memory product. The kit I received is optimized at a clock speed of 3200 MHz (PC4-25600). The memory kit consists of four DIMMs, two of which are 8 GB DRAM modules and the rest are RGB modules. The kit makes up a total of 16 GB in capacity. A few key features of the AORUS RGB Memory kits are listed below:

The memory kit has a tested latency spec of CL16 and the timings are 16-18-18-38-2N for this specific kit. Voltage set at reference is 1.35V and the memory kit comes in an unbuffered package with non-ECC (Error Correction) design. The memory kit is fully compliant with Intel's XMP 2.0 and can be easily set to its rated clock speeds through the BIOS shipped on the latest Intel and AMD motherboards.

The AORUS RGB Memory comes in a nicely designed box-shaped package. It is very bulky for a memory kit and has the orange and black accents from the AORUS brand. The front of the box has the name and specifications sticker along with a picture of the modules. You can also tell that the memory kit is optimized for the Gigabyte RGB Fusion application as mentioned on the front label.

The back of the box lists down detailed features of the AORUS RGB series memory. Aside from the specifications, here I can see the four memory modules mentioned. Two of these are DDR4-3200 MHz modules while the rest of the two are RGB infused demo modules.

Opening the box, I am met with two large plastic container which firmly holds two DIMM sticks (each). The memory modules carry a solid weight to them which in turn points out to their great build quality.

Removing the plastic cover, I put my sights upon some on an impressively designed DDR4 memory DIMM. Being their first try at memory modules, AORUS definitely nailed the design with a simplistic approach that would appeal many gaming PC builders.

There's also a "User Installation Manual" inside the plastic casing. Although installing memory isn't a big deal but it's still nice that companies like AORUS focus towards educating the general consumers of how to install PC hardware properly, even if they aren't doing it for the first time.

The 2mm silver colored, brushed anodized-aluminum heatsink and the LED accent bars look great. There are AORUS labels and brand logos on the sides which give out a good design.

The AORUS RGB memory uses an AORUS patented full-width light diffuser which makes use of five LED light sources that distribute lighting across the memory module. There are also accent cuts on the top and sides that help spread the LED lights through the memory.

Now for the weight, yes these are very heavy memory sticks and I am surprised by the reason. Not only are the DIMMs using top of the line Samsung-B ICs on a high-end 10 layer PCB, but the shroud is also all aluminum based. This increases the overall cooling capacity of the specific modules and also prevent memory from external forces such as pressure, air, and dust.

Talking about the size and dimensions of these memory modules, the AORUS RGB memory comes in at 39mm tall which should make it easily compatible with large cooling systems. This is a positive for this memory kit.

The two modules pictured on the bottom don't have any memory dies on them. They aren't DDR4 modules but are compatible with DDR4 slots. As you can see, they have only a handful of gold pins which are necessary for it to contact the motherboard and sync with the other modules to display RGB effects. The dies only come with electrical circuitry, the main component of which is the MCU that drives RGB on all four modules.

These RGB infused modules are a game changer for the memory industry and I will talk more about these in the conclusion.

For testing, I used the latest Intel Core i7 8700K processor which is fully compatible with higher speed memory like the AORUS RGB Memory kit. The motherboard used was a GIGABYTE AORUS Z370 Gaming 7 and I booted the memory without any issues. The XMP profile to enable the 3200 MHz frequency had to be set from the BIOS which wasn't a hard task. The new 300-series motherboards are fully compatible with the fast DDR4 DIMMs.

The memory kit comprises of 2 DIMMs that operate in dual channel mode. Since I was running a Z370 platform, the memory was operating in dual channel mode. The memory is clocked at 3600 MHz and will run at 2600 MHz be the default when XMP profile is not enabled since that is the JEDEC standard clock speed. Clock timing is set at 16-18-18-38 (CL18) and the capacity is 16 GB for this specific kit.

Gaming applications generally don't see huge gains with different memory kits but DDR4 has enabled a huge gain in memory frequency which can impact gaming performance. Moving from the stock 2600 MHz to 3200 MHz is a big clock jump so I am eager to see what kind of general and gaming performance differences I get to see with that increase.

The AORUS RGB memory is impressive in design and built quality, making it not only a great option for gaming systems but for general case PC users too. That's a good start as a new entrant in the memory market for AORUS. The kit is compatible with both Intel and AMD based systems such as the new Z390 and X470 PCH platforms that allow faster memory support on the latest generation of processors. Now the memory kit is priced at $219.99 US which is a slightly higher price for a 16 GB 3200 MHz kit as you can get many 3600 MHz (CL18) kits for that much but if you are in for the looks, then keep on reading as this memory won't disappoint you in that department.

AORUS is using the highest grade Samsung B dies on the RGB memory kit which supports up to 3200 MHz speeds at CL16 timings. This is a good amount of performance which you are getting from this kit. In addition to this, a 10 layer PCB, a solid 2mm heatsink with superb aesthetics make it one of the most eye-catching modules of 2018.

The other plus point for this memory kit is its superb design. It comes with a unique design set that looks simplistic and very well made. The color scheme is a good match for several desktop systems and the whole built is very solid. The heatsink that covers the PCB is solid aluminum based which means you can stop worrying about high temperatures while the shroud on the top is the standard DDR4 height, allowing you to select from a range of hefty coolers.

Then comes to the lighting system and AORUS has hopped on board the RGB bandwagon just like every other manufacturer. They do have a specialized software known as RGB Fusion which allows a full array of RGB configuration. Now while the AORUS motherboards had no problem running through the 11 different RGB modes on the kit, the other RGB Link application that runs on other manufacturer boards aside of Gigabyte had some issues not displaying the correct effects or just not registering them at all.

But the thing I am most interested to talk about here is the RGB. Well, AORUS actually solved a long-standing problem that memory kits have had for a long time: namely what happens if you buy a dual-ram kit and want to fill the whole slots for that delicious looking RGB effect? The solution? dummy rams included which only do the glowing bit.

This was a well-known design issue and previously you just had to by more ram or get a two dual channel ram kits of the same capacity (and limiting your future expansion). This new idea will allow users to have complete peace of mind and start off with dual channel ram kits and enjoy the two complimentary dummy Rams included and allow them to achieve a perfect RGB look. The AORUS RGB RAM is beautifully designed and has a very classy look and feel to it. Of course, if you just want more capacity (32/64 GB), you can switch out the RGB demo modules and just plug in the DDR4 for higher capacities.

The AORUS RGB memory is the latest entrant into the overcrowded DDR4 "RGB" market but doing so, it offers a solid memory design and solves an age-old problem by including RGB infused demo modules ina dual-channel ram kit that allows PC users to enjoy the quad channel RGB look at a significantly lower cost. 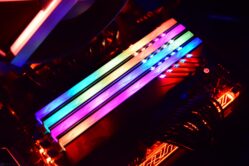 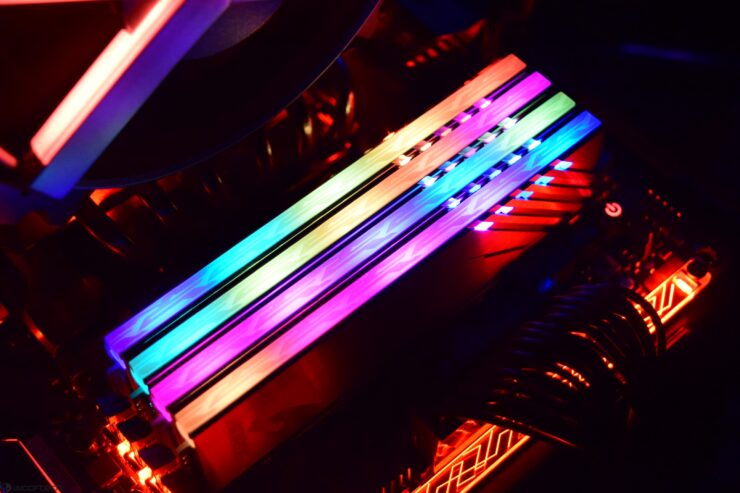 The AORUS RGB memory is the latest entrant into the overcrowded DDR4 "RGB" market but doing so, it offers a solid memory design and solves an age-old problem by including RGB infused demo modules ina dual-channel ram kit that allows PC users to enjoy the quad channel RGB look at a significantly lower cost.