For the last two weeks, seldom has a moment gone by where I haven't thought about Animal Crossing: New Horizons. This morning I woke up, spent some time fishing, hitting rocks, talking to villagers, customizing my outfit, digging up fossils, and paying off my loan ready for my next house extension. While not playing, I'm thinking about rare fish, fossils, and pleasing Blathers with a collection of his favorite insects. While I am playing, I'm putting plans in motion, how the town will be decorated, how I will change the landscape with the terraforming feature in the future, what materials I'll need for upcoming DIY projects, and so on.

Animal Crossing is not an intense experience. It's slow-paced fun to be enjoyed day-to-day in small sessions. Despite that, two weeks of daily play helped me amass just shy of 40 hours of game time. So good news for Animal Crossing fans: this game is great, and offers a very familiar, yet substantially different, experience to what Animal Crossing has given you before. If you're a fan of the series, that's all you really need to know before jumping into your new island life (especially in the modern age of Corona-quarantines), but for the rest of you, allow me to attempt to convince you on why Animal Crossing: New Horizons is so good.

Animal Crossing is a game where you find yourself starting a brand new life. Previously you'd be moving into an established town, or becoming the new Mayor of a young village, but this time you are moving on to a brand new island. The landscape is barren, and the only building you'll start with is the Resident Services tent. You start from scratch, and that allows you more flexibility on how to customize your town than ever before. But for the short term, worrying about where to put down your tent is most important. 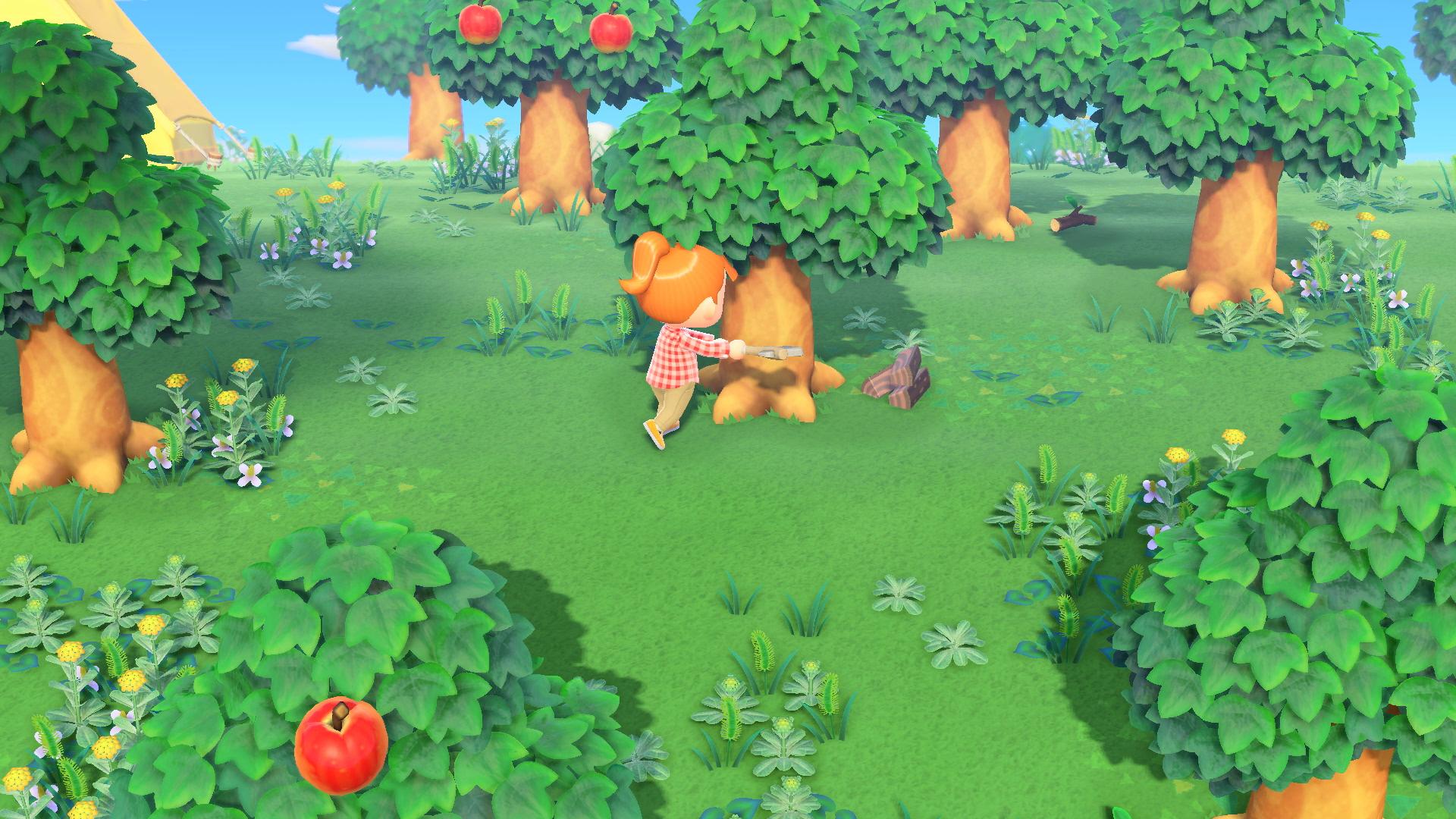 Traditionally in Animal Crossing the experience has no goal other than those that you set, but this one is far more structured than ever before thanks to the crafting system. Yes, Animal Crossing has continued the trend it set in the mobile Pocket Camp game, and introduced a robust crafting system that will see you gathering and putting together materials, much like Minecraft, honestly. You'll be using axes to cut wood from trees, shovels to smack iron nuggets, gold nuggets, and clay from rocks, shaking trees for branches, collecting weeds and flowers, and so much more. Much of the game has been changed to revolve around this new central crafting mechanic, and as a result, you'll be gathering a lot of materials.

You used to be able to buy a fishing rod and a bug net, and then use those for the rest of the game, never needing to change. Now, these items will likely break before you even fill up your inventory to take back to the shop for cold-hard-cash. There are even tasks handed out by Tom Nook to improve the island when you first start the game. He'll task you with collecting materials to put down new houses for villagers, or building DIY projects to help fill the town out and make it appear less like a deserted island. For the first time, it feels like an Animal Crossing game has a more tangible sense of progression, which admittedly means it loses some of the slow-paced charm the series is known for, though personally I liked having a bit more direction with my play, allowing me to target something other than solely expanding my home. Even the trash you fish out of the rivers will bestow upon you new DIY projects, and you'll be recycling those boots, tires, and cans into new furniture to place around the island.

For example, when you first start you will not be able to cross the river. The river will surround you on all sides, meaning you only have access to about one-third of the island. After a day or two, you'll be allowed to craft a vaulting pole to cross the river, and several days after that, you'll be able to build the ladder to get up onto out-of-reach cliffs - yes, this game doesn't even come with slopes to give you access to the whole island. At first, you'll need tools to get up here, and later on, you'll be giving Tom Nook bells so he can build bridges and inclines, joining your whole town together. 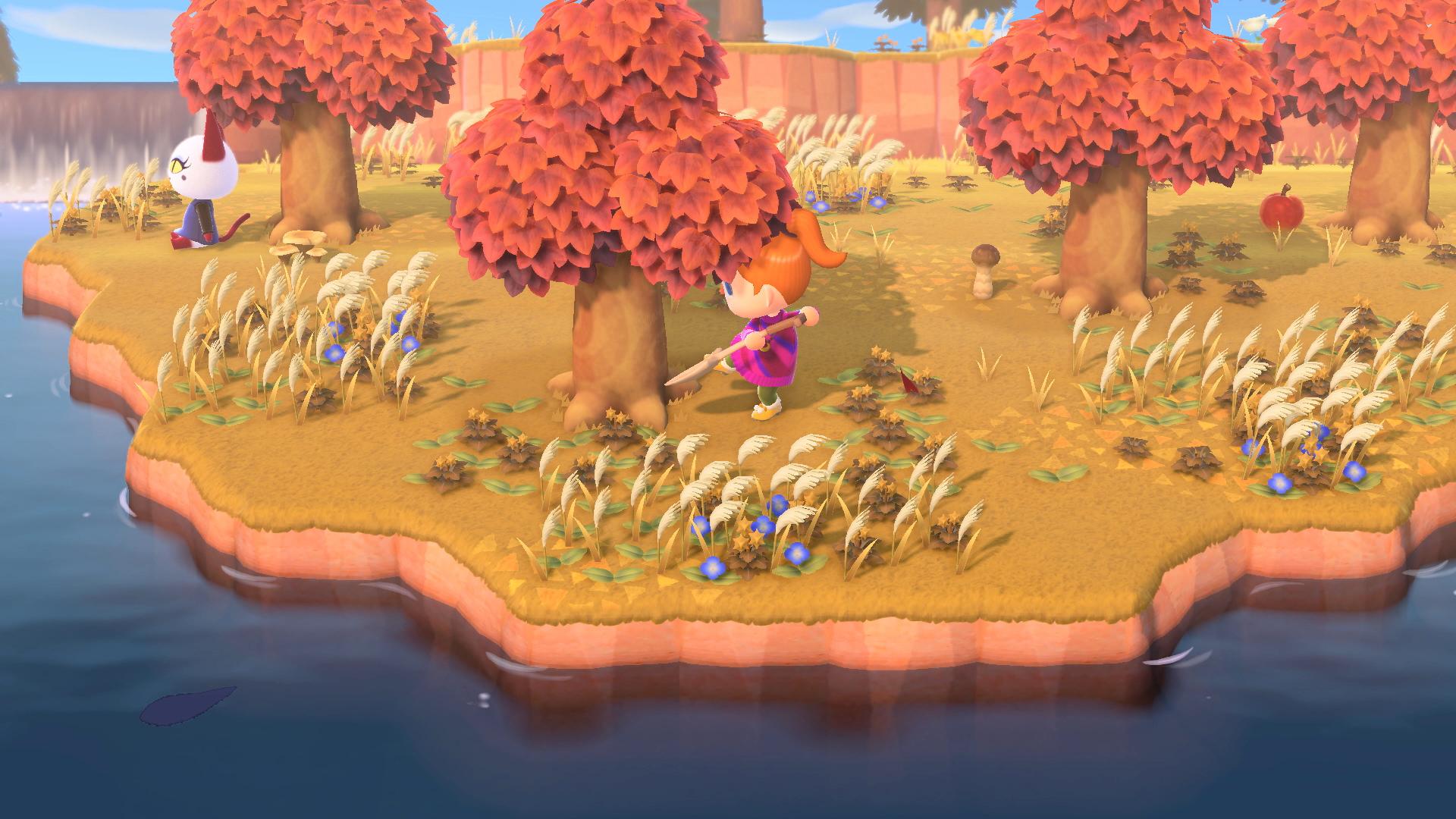 As you progress you will be able to personally choose where all the buildings in the game get placed, you will be able to select where the bridges in town get built, where the trees and flowers are located, and so on. This culminates in the terraforming ability, which freely allows you to create your own cliffs and rivers, shaping them into any design you wish, even if that includes having a thin moat surrounding your home, or perhaps raising your home on top of a cliff, overlooking the island from your mansion. You'll even be able to craft proper pathways and designs, making your town into, well, anything you want. The possibilities are endless, and the Animal Crossing experience has become shockingly more customizable and variable thanks to the inclusion of Minecraft-inspired mechanics such as crafting and terraforming.

But that's not where island customization ends. The ability to place furniture anywhere outdoors completely changes the game. Your bland island is quickly transformed with furniture, a Statue of Liberty on the beach to recreate Planet of the Apes, trash in the woods to make a comment about the environment, a bonfire outside your house, a flower garden surrounded by a fence of your choosing, street lamps, utility poles, lighthouses - the list goes on, and the point is that you can truly turn any part of your island into anything you want with enough furniture and dedication.

Your town will quickly evolve to include the museum, the tailor, Nook's Cranny, and much more. You start with a blank slate and quickly find yourself in a world that you have had a hand in every step of the way. Frankly, no matter how you play New Leaf or previous Animal Crossing games, there was a degree of randomness to your island layout and hows facilities are placed, but now you have true, full control over everything by the time you unlock terraforming, and as a result, this feels like your town. Not a town you moved into, not a town live in, but one you actually own the design of completely and entirely - and that is a very different feeling for an Animal Crossing game, and one I adore. 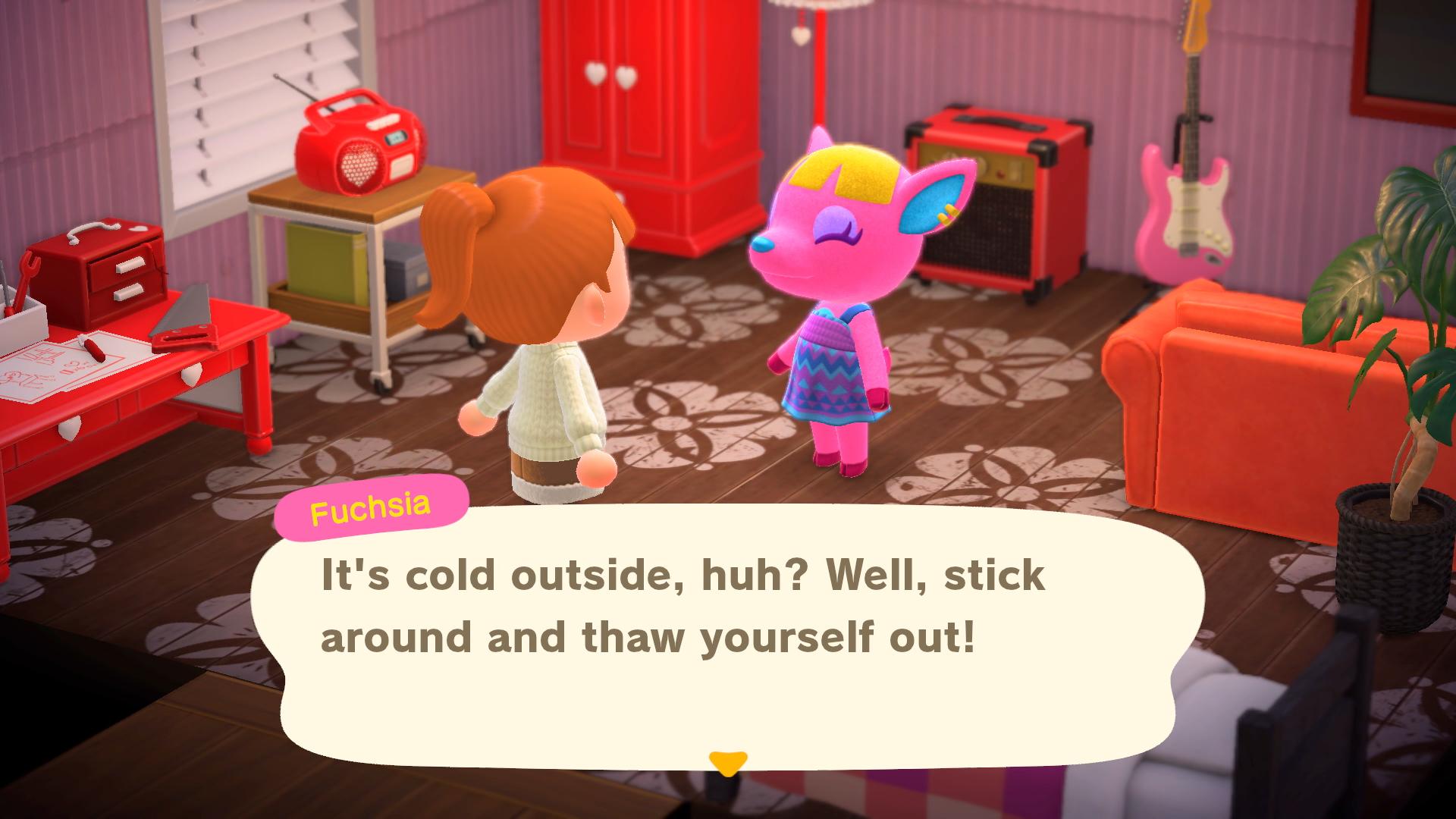 But not everything is perfect. The game does a good job of making your progression feel fairly slow - despite 40 hours of play, I feel like I'm barely scratching the surface so far - and classic aspects of Animal Crossing games feel oddly lacking. The villagers, for example, are far less important than before. You'll be tasked with increasing the population of the town, putting down houses, and choosing who moves in, but when the villagers are there, there's rarely a point in actually talking to them. They rarely have tasks or gifts for you, and usually only have something interesting to say if they approach you directly. They feel like an afterthought, which is odd since they were once the most important part of the game.

But honestly, that's almost all I can complain about Animal Crossing: New Horizons. I felt mixed on tool degradation and the importance of the crafting system at first, but I can't help but like it. It's neat, makes me feel like I'm constantly earning and improving, and when you run out of rocks to beat for clay and iron on your island, you can buy a Nook Miles Ticket to fly a plane to a random, small, deserted island which you can abuse for flowers, fruit, fish, bugs, materials, and more. These islands only exist for as long as you are on them, so you can feel free to take advantage of everything there.

Which brings me onto Nook Miles. The crafting system wasn't the only cue that New Horizons has taken from Pocket Camp. The Nook Miles program are essentially small quests - imagine daily quests and challenges that you'll find in most online and mobile games. For each challenge completed you'll earn Nook Miles, a point system where points can be traded for DIY recipes, furniture, music, and more exclusive items. Eventually, one day, you'll have collected all of the bugs, fish, furniture, DIY recipes, and participated in all the events, which will mean you'll be all finished with the primary Nook Miles challenges, but you'll still have an unlimited amount of daily bonus challenges, which will reward you miles for cutting down trees, collecting wood, fishing, bug catching, and the list goes on. Eventually, you can conceivably collect all of the Nook Miles rewards, but then the Nook Miles Tickets will still be there for you to earn an unlimited amount of, so you can keep visiting islands and collecting extra materials when your own island runs low. Again, Nook Miles is a weird addition I was unsure of at first, but I ended up really liking it. 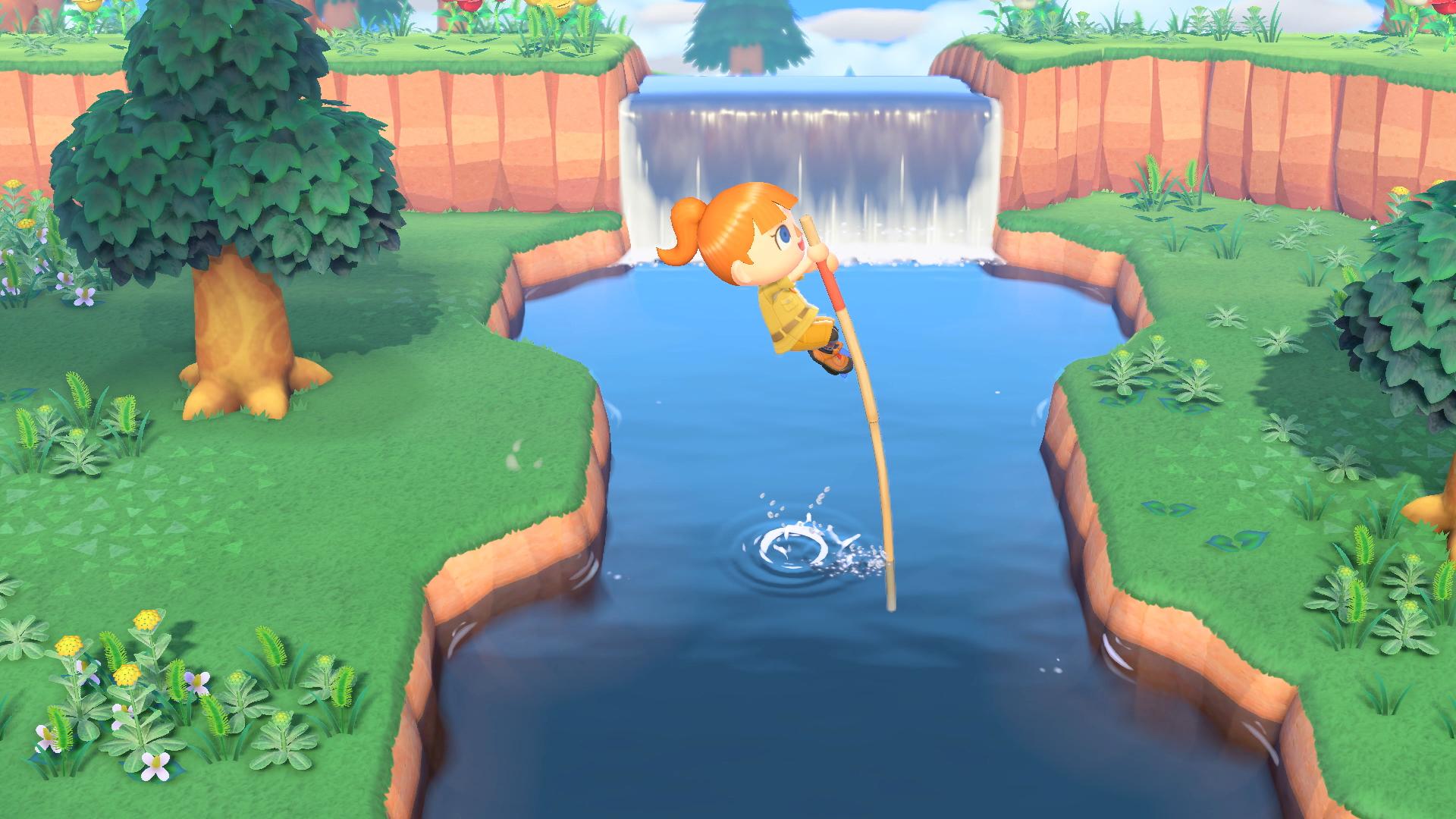 And Animal Crossing: New Horizons can be a social experience than ever before, thanks to local and online multiplayer. Multiplayer with multiple Switch systems is great and allows you to play in other people's towns, buy from their shops, fish with them, etc. Multiplayer on a single Switch system is far more limited, with four players able to join, but they all must already have a home on the island (by playing the game with different accounts on the same system) and they all must follow a single "leader" villager, with extremely limited interactivity in the world, for example, only the leader can access their inventory. This makes single-system multiplayer an awkward experience while playing online or locally with another friend's Switch is pretty great, and of course, you can have up to eight villagers run around your town at once. As a bonus, you can even buy advanced DIY recipes from friends, even if you haven't made much progress in the game yet.