Strategy games generally don't belong on consoles. This isn't really a strange thing to say, it's quite widely known by now that the limitations of a game bad don't work well with the genre, with a few exceptions for side-scrolling titles like Sword & Soldiers, turn-based titles like XCOM 2 or Valkyria Chronicles 4 or, on rare occasions, real-time games that have really worked at it, either being developed with consoles in mind or just being suitable, for one reason or another. Ancestors Legacy, developed by Destructive Creations and published by 1C Entertainment, is one of these games.

Originally released on the PC on the 22nd of May, 2018, Ancestors Legacy was eventually released on the PlayStation 4 and Xbox One around two months ago on the 13th of August, 2019.  The question is a simple one, with it being a strategy game, is it worth getting on a console? Let's ruin the review for you right away: Yes, it is. There are some caveats to that statement, this isn't going to be the game for every strategy fan, though it's certainly a good entry point for others.

If you were to make a link to any other game, the aptest would be Company of Heroes with a dash of Lord of the Rings: Battle for Middle Earth due to how everything controls. In the case of units, you can build a (very limited) number of squads, each of them having a set number of units that can be healed or recovered. At least some can be healed. In the case of building your base, it's a set area and you don't have to worry about the placement of anything, you just select what you want to build next. Everything has its preordained position.

Even when it comes to resource acquisition you'll find it's a lot easier than the usual strategy fare. Maps have villages scattered around and you simply burn down the warehouse, letting you then capture the village. Once captured you can use the building to assign people to resource nodes as well as build certain defensive elements. If I have to give the game a bit of credit, it never makes it so you can just ignore a village. You always have to be concerned about defence, no matter if you've built all defensive structures.

This takes a lot of the complication out of things, making it much more suitable for the use of a controller and the fact that you're always going to be that bit slower when playing a strategy game on a console. If I do have any issues with the game, it's also an issue I have with the PC version. It's that everything feels a little too small scale at times, with you having a maximum of ten squads at any one time. Sure, with allies you can go above this maximum, but what you directly control is limited.

What makes this worse is that the AI in Ancestors Legacy is, to put it as nicely as possible, moronic. AI Allies, in campaign or skirmish, will just meander to their death - barely putting up a fight. Even when they're not essentially feeding themselves to the enemy, they're just making the most idiotic decisions possible. Yes, I know - let's completely skip the village being taken from us to wander to another, halfway across the map. Let's also split up, meaning we get completely overwhelmed. LOGIC.

To be fair, I don't know if it's due to the AI being just that bit stupid, but enemies do the same thing. Often, this can actually take you by surprise, with them just popping up in the most random of places. I've known four or more squads pop up far behind what would be the front line, taking me by surprise. That's in Skirmish anyway, in the campaigns they seem to be a little more rigid and predictable. I'm not actually sure which I prefer, both being flawed in their own ways.

At least the AI understands how to utilise their troops effectively when they're actually in battle. You see, you can build a set number of defences along the way and once they've fallen for one trap, they actually start using units in the area in a defensive formation, letting them detect other traps. It's small, but actually shows a bit of common sense that you rarely see in these sort of titles. In addition to this, they also seem to level units up (units gain experience, letting you level them up as either defensive, offensive or speed-oriented troops) in a smart and efficient way.

On the campaign in Ancestors Legacy, it's very meaty. It extensive, but can feel a little repetitive. Spread across four nations, each having two leaders with their own stages to go through, you're going to find yourself giving up a lot of time to get through the game. The problem is that the four factions: Vikings, Anglo-Saxons, Germans and Slavs, are all very similar. Part of this is essentially the setting of the game, though other titles with a similar setting allow aspects to feel that bit different.

The differences are usually quite simple. Vikings have stronger melee units, weaker ranged units, tech and armour costs more but their buildings are essentially made out of matches, with how easy they are to destroy. Slavs have a unique unit in the archer-cavalry, with the trade-off that they have no heavy infantry. Anglo-Saxons, understandably, have unique tech for ranged units - particularly the longbowmen. Germans have a wider variety of units with their major point being superior buildings and technology. Similar but just a little different, that's the best way to describe the factions.

It's useful because when playing online, there's no way anybody could make the argument that one faction is somehow better than the other. They're incredibly well balanced, each having these little pros and cons. It's up to the player to make it work for them and find what suits them. I'm a defensive-minded person, so I've found myself using the Germans or Anglo-Saxons more than anyone else. If there's anything to be said about this, it makes the online multiplayer engaging, to say the least, and most assuredly about skill. With it being on consoles, it's also not just about how fast you are at clicking. I'm not.

Aesthetically, Ancestors Legacy is quite decent too. There isn't a great deal of variety in what you're looking at, but it at least looks good. What particularly works well is how detailed the animations of each unit are. It's actually quite nice to watch as your warriors hack away at enemies, especially if you zoom in. it also helps that the UI for the consoles is very crisp, clean and uncluttered, but still offers all the information you need. The audio, on the other hand, is a bit of a mixed bag. I've noticed some stuttering here and there, plus the voice acting is... Well, it's there, that's the best I can say about it.

All in all, I can honestly say that Ancestors Legacy is a decent strategy game in its own right, certainly more suitable for those who are just wanting to take shallow steps into the genre. More than that, it's also one of the very few decent strategy games on consoles. 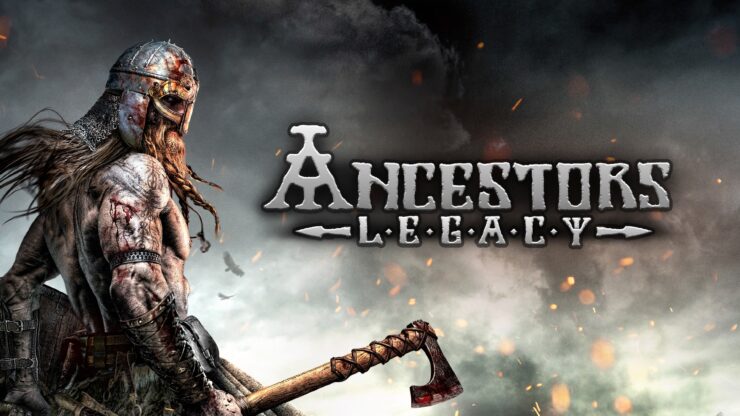 Ancestors Legacy is a genuinely good console strategy title, with Destructive Creations having ported the game over well with improvements to UI and controls to make it as playable as possible on a gamepad. As for the game itself, while simplistic compared to other strategy titles, it offers a great jumping-in point for those new to the genre. Even those familiar will find something enjoyable within, with a well-balanced (albeit small) roster of factions supports a strong multiplayer, even a decent, albeit repetitive campaign.