The Aliens universe of video games routinely switches around between horror experiences and mindless action games, never quite striking a proper balance between the two. After Alien: Isolation took the series into the best iteration of horror Ridley Scott's universe has seen since the original trilogy. Now, it's time for the pendulum to shift in the opposite direction and let the Colonial Marines get their chance in the spotlight with a heavy action shooter. Built for squads of three, Aliens: Fireteam Elite shoots to prove whether xenomorphs are just as deadly in packs as they are hunting solo. 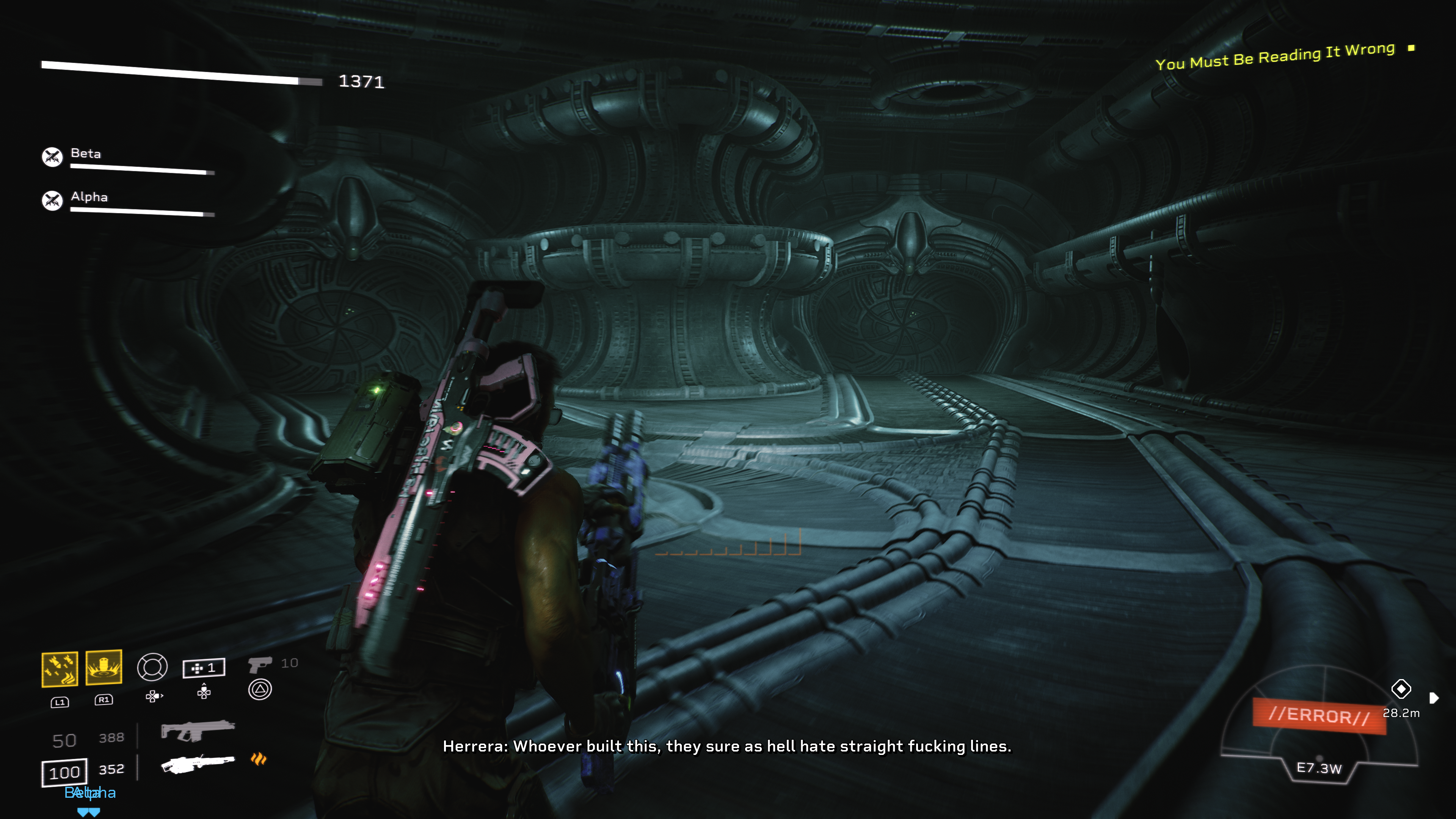 Set up across four mini-campaigns, each three 20-minute stages in length, Aliens: Fireteam Elite tells the story of a squad of Colonial Marines sent on a cleanup mission that's more search and rescue than anything else. First aboard the Katanga refinery and down onto the surface of LV-895 and back again, these missions all usually revolve around one goal: make it through one claustrophobic encounter to the next, occasionally stopping to see the sights and blast away at wave after wave of either xenomorphs or rogue gun-wielding androids before culminating in a final last stand that lasts a couple of minutes of defending enemy assaults from all angles. No matter the mission, these all offer the same flow and you won't feel like you're missing much crucial lore by jumping into a friend's game (minus some story revelations about the characters you rescue).

Aliens: Fireteam Elite makes the guns do the talking for you most of the time as players will be too busy blasting away bugs to react to the commanding officer's repeated one-liners. With a game as action focused as Aliens: Fireteam Elite, it would make sense to have that be the star of the show. In addition to your usual gunplay, each character class will have access to two L1/R1 abilities that vary from class to class and all operate on simple countdown timers to refresh. The guns themselves range from all of the greatest hits of Alien history: shotguns, assault rifles, smartguns, flamethrowers, and more. I wish I could speak more praise for the shooting, but most enemies are bullet sponges and most weapons lack any real sense of impact or weight to them. When swarmed by enemies numbering in the dozens, a single shot sniper rifle might sound great on paper against the bigger elite foes but you're going to need something faster firing to take care all of the not-mindless zombie Xenomorphs in your way first. 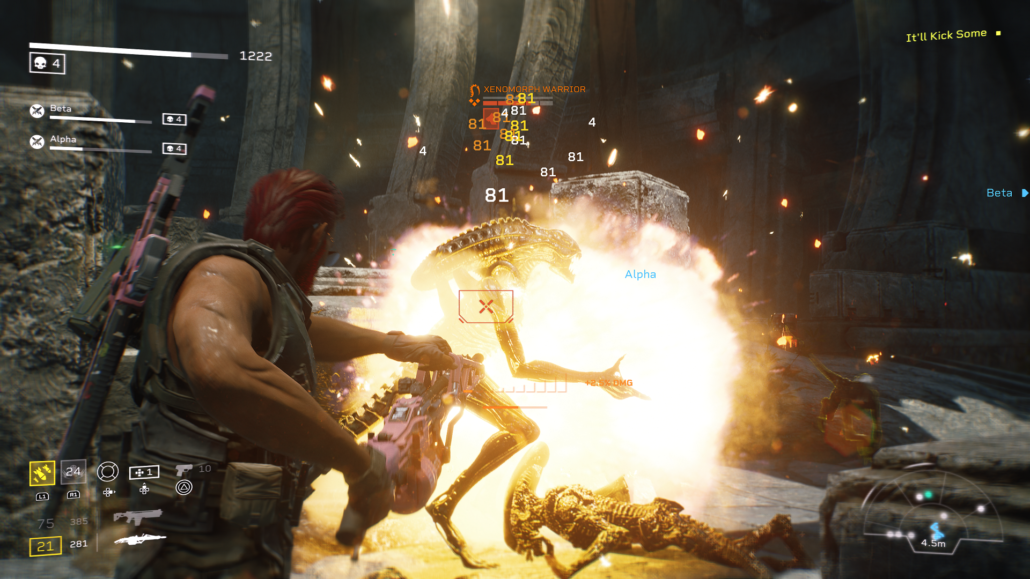 You'll find all of the greatest hits of third-person shooter mechanics here (no active reload, at least) along with two baffling inclusions that don't make much sense for a game like Aliens: Fireteam Elite: cover mechanics and melee. Cover mechanics don't make much sense facing against a xenomorph menace that will mindlessly charge at you instead of engaging in any real tactics (cover will certainly save your ass against the elite androids that bring sniper rifles into the mix in the middle of the campaign). However, I found next to zero justification for including a melee in Aliens: Fireteam Elite. Xenomorphs all explode into a pool of corrosive acid and many an android explode violently when defeated, so there really isn't a scenario where players can safely melee an enemy combatant without taking at least some damage.

Persistent progression in a co-op shooter is that carrot on a stick approach that keeps me wanting to come back to play. That is when that carrot is appealing in the first place. Aliens: Fireteam Elite incentivizes the player to continue playing with more than two dozen weapons and five character classes (four to start, the fifth locked behind campaign completion) that each game levels and feed into a universal combat rating that's supposed to indicate a level of combat readiness to take on a specific campaign mission and difficulty. 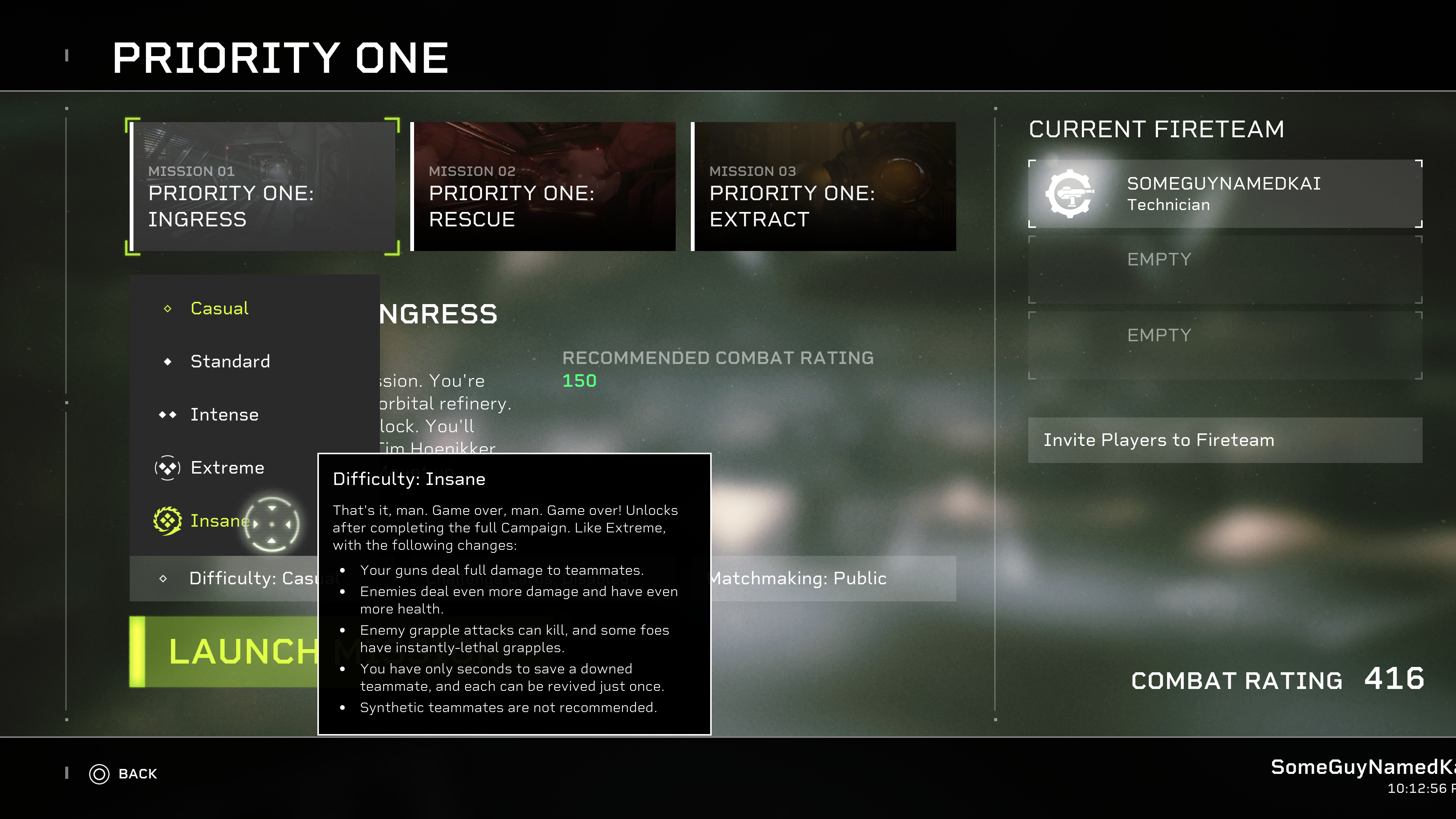 However, it feels as though the developers at Cold Iron Studios started the framework for some solid systems and then simply stopped. Weapons and accessories all offer a flat bump to your combat score, typically 10-20 points apiece, leaving much of your combat score to be earned by leveling up a kit and slotting in ability modifiers into a rudimentary skill chart that expands each time you level up the kit. Each subsequent level on a weapon improves an assigned statistic such as accuracy and fire rate by a minor amount with the fourth and final level typically some sort of stat boost that increases per additional hit for a small amount of time. Each new boost or perk that the player unlocks is such a minor upgrade that players might not even notice much of a change between levels, leading to the illusion that they're leveling up towards becoming the most badass elite soldier that's ever stepped foot aboard the Katanga.

What I do have to give praise on is the fact that Aliens: Fireteam Elite allows players to mix up unlocked skills from other classes into the mix. Say you're like me and enjoy a good shotgun in your hands: invest some time in Technician and Recon for a pair of CQW perks that boost reload speed. Likewise, Gunner offers up stability enhancements for any class that uses automatic weapons if you opt to fire in controlled bursts. With that being said, the classes largely feel homogenous to one another, varying mostly in the two weapon types they can wield and the three active abilities they carry. With Gunner and Recon both wielding Rifle and CQW weapons, you'll have to decide if you want to play a character that offers more assault/damage actions or a class that has more beneficial abilities for the whole team. 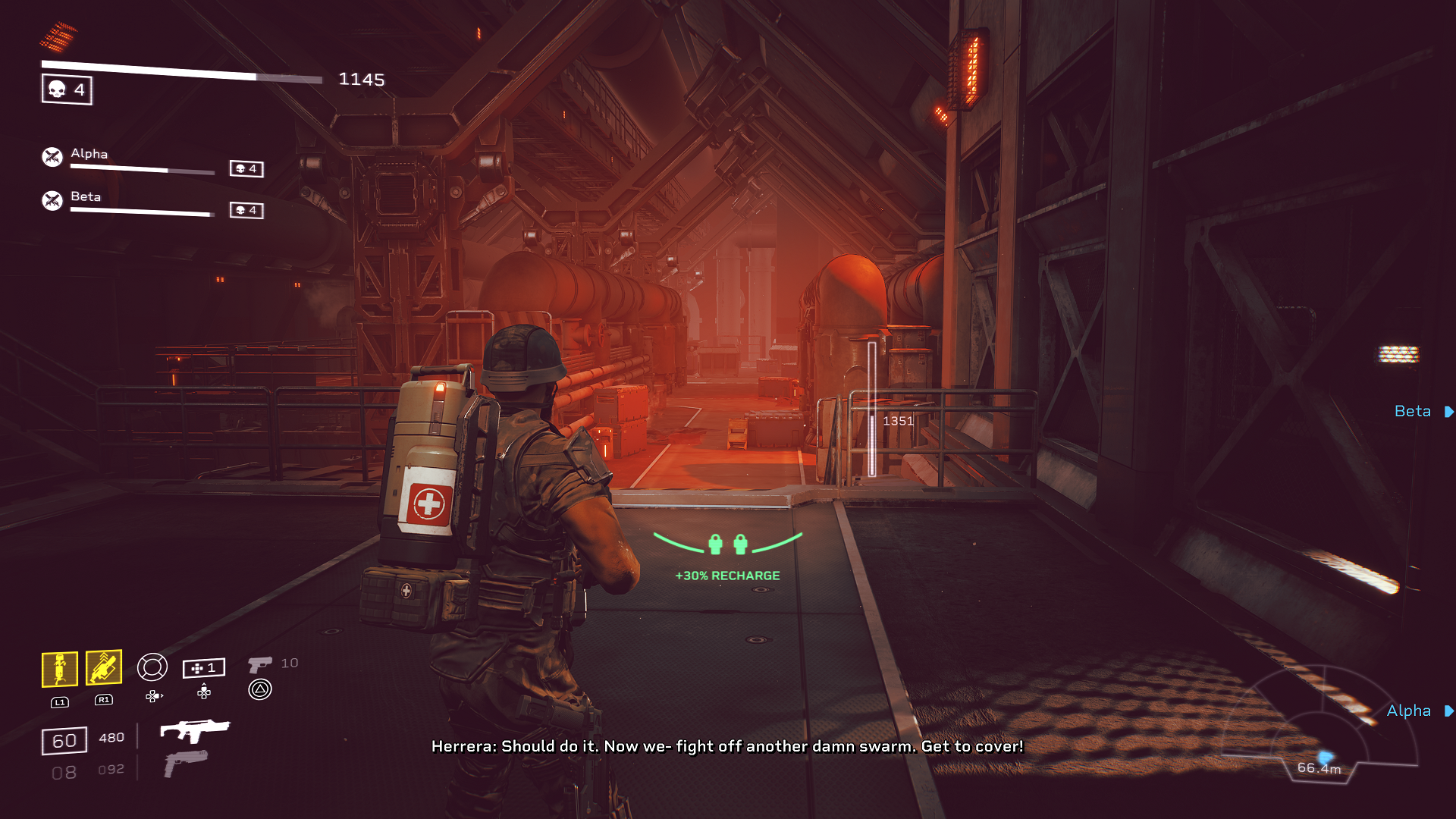 In proper Colonial Marines fashion, Aliens: Fireteam Elite's twelve mission stumbles along its path to alien dominance and regicide by ending the campaign on a fairly low note, even for the limited campaign. Without spoiling the finer details of the final mission, I was left throwing my hands up in frustration and sighing out a whole 'is that it?' as the credits began rolling and I was offered the opportunity to replay those same twelve missions once again on two higher difficulties. As someone that barely squeaked by with AI companions on Standard and Casual, the thoughts of jumping into a mission with a recommended combat rating exceeding 650 to my modest 400 was of little interest.

Aliens: Fireteam Elite's biggest folly is in assuming that the player is interested enough in the missions offered that they'll bring along two friends to play through the campaign not once, not twice, but five times across every difficulty as well as the simple Horde Mode. Unfortunately, if you are left wanting to join a pickup game of bug hunting, the multiplayer offerings are incredibly sparse. Without crossplay available between platforms, players are limited to those on their respective console generations. To find a match, however, you have to be searching for a game at that exact point in time on the same difficulty as another player. After picking your preferred mission, you're dropped into a sixty-second queue to try and matchmake with one or two fellow players before the slots are filled with AI companions. There's a typical option to invite players to your fireteam, but unless you happen to be playing at a time with plenty of other players (during my entire review period, I ran into zero other players on PlayStation 5), expect to have the Alpha and Beta AI bots watching your six most of the time. 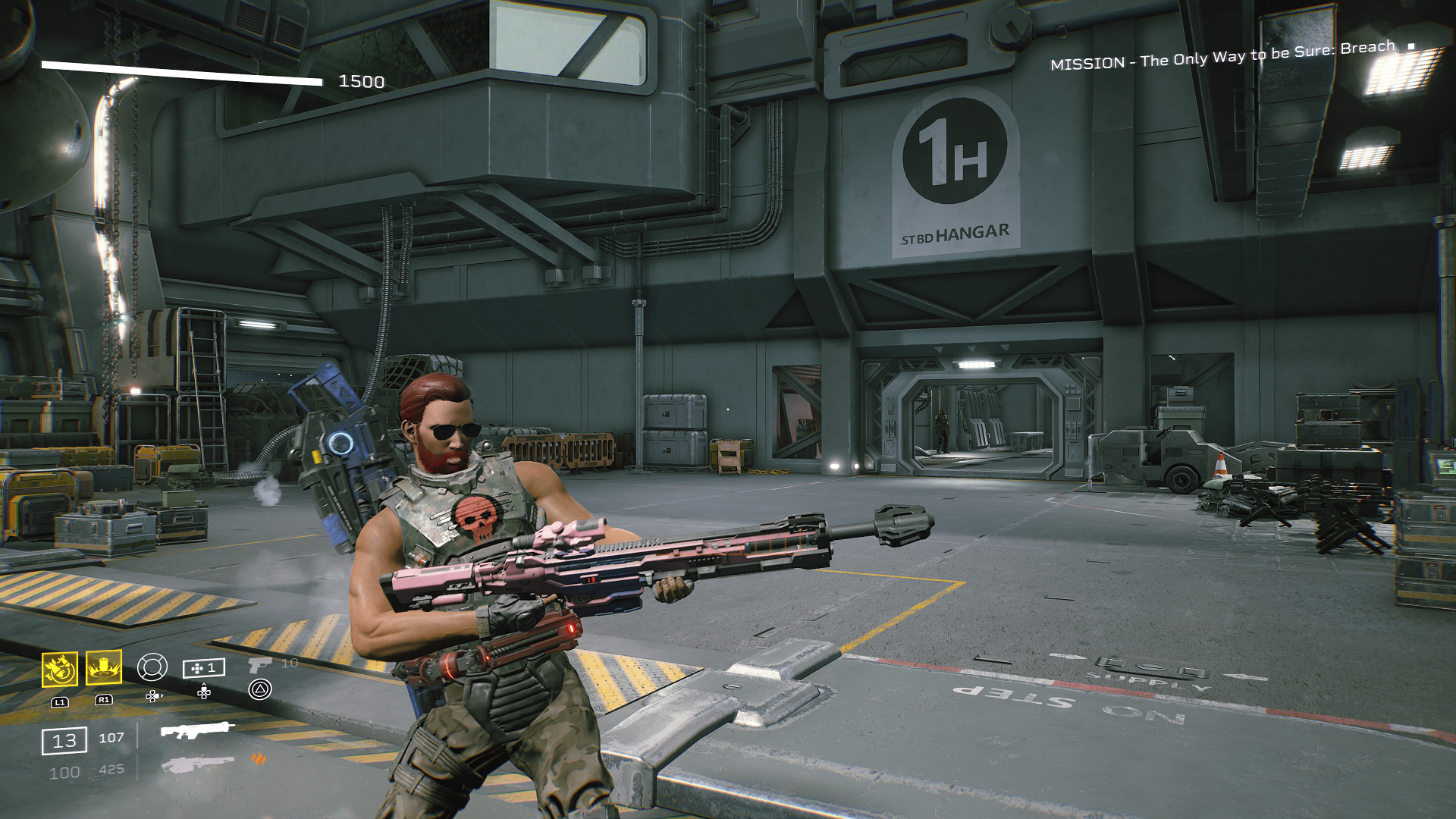 Prior to beginning a match, players can opt to burn a challenge card, giving the mission a temporary positive or negative modifier. These range from increasing ammo counts, reducing regular damage but tripling critical/weak point hits, time limits to complete the mission, among others. The positive effects typically won't reward the player with anything but completing a negative challenge card will routinely increase the experience and credits earned in a successful mission. I haven't been able to seek out a multiplayer match as of yet, so I can't definitively state if each player can consume their own challenge card to benefit the team or if it's solely for the player themselves.

When not actively blasting Xenos to pieces, time spent on the Endeavor is filled speaking with lifeless NPCs that stare lifelessly at the player while spouting out their cheeky one-liners. While on a mission, SSGT Herrera or your particular mission caretaker will watch on and react to whatever is going on in the mission while boasting of self-aggrandizing machismo that if it wasn't funny the first time you heard it, it certainly won't be funny the fifth time around.

The Colonial Marines and military types of the Aliens universe would normally be a perfect fit for the style of co-op shooter that Cold Iron Studios was aiming for but unfortunately Aliens: Fireteam Elite misses the mark by a wide margin. Instead of celebrating the sheer power of the Colonial Marines, these three-man fireteams are simply trying to survive being mobbed down by waves of mindless, fast-moving zombies with the added ability of being able to crawl on walls. The potential of building up a badass Doc was quickly ruined with the realization that there just isn't much incentive to keep grinding away for minimal returns. I've played through the Aliens: Fireteam Elite campaign once and a bit more for this reviewer in particular, it's game over, man.

An experience built for a fireteam of three, Aliens: Fireteam Elite turns the xenomorph horror on LV-895 into a shooting gallery that sadly misses the mark of what made its source material so iconic in the first place.