I've never been a massive fan of Hitchcock films. I appreciate some of them, and I can certainly appreciate what he brought to the film industry. There's no doubt that he arguably helped propel the thriller genre more than any other director through the masterful use of cinematography. That's the key thing to remember, Hitchcock was a director known for his style, which Pendulo Studios have looked to recreate in their new title Alfred Hitchcock - Vertigo.

You should know coming in that you don't need to know anything about Hitchcock, the Vertigo film, the French novel it was based on, or - honestly - what vertigo even is. I'm not saying it wouldn't be good. You'll find a lot of references to other bodies of Hitchcock's work, such as an abundance of birds, something similar to the famous scene from Psycho, and more little bonuses for fans of his work. That's all they are, little bonuses, nothing essential.

Since Alfred Hitchcock - Vertigo isn't actually about Alfred Hitchcock's Vertigo, what is it about? Something completely different, that's what. It's not a game based on the film, nor is it even a spinoff. It is an entirely different story that follows similar themes and beats of the film and other Hitchcockian films. There's misdirection aplenty, twists and turns where you wouldn't expect them, and more. There's only so much I can say without ruining the story, which in turn would wreck the entire game.

The reason for this is simple, the story of "Alfred Hitchcock - Vertigo" is the game. When I went into this, I didn't even know the game existed. At first glance, I thought I was coming into a TellTale style game. However, having played a few of Pendulo's earlier titles (Runaway: A Road Adventure, Yesterday), I could have expected something different. It wouldn't be fair to say that this is either of those types of game.

It's closer to a Quantic Dream title than an adventure game of the developer's earlier making or others that helped bring the genre back to the forefront. This comparison is unfair to Quantic Dream, as this is more railroaded. Long story short, it's a very long film with button prompts. I've yet to find a fail-state, even failing button or joystick prompts (more on these later), or not seeing how to progress will find the game giving you multiple chances or just waiting for you.

Aside from prompts and playing find the pixel, is there any other gameplay? Not really. There are areas you get to wander around and interact with the environment, offering some background fluff or some extra story-building, some of which can even result in an additional line or two, but none of it impacts the story. It isn't an "every choice matters" game; there is only one choice - so far as I can tell. That isn't necessarily bad, so long as the story is good and well-told.

The story is where Alfred Hitchcock - Vertigo can elevate itself in one moment, then fall from that greater height soon after. Much of the story takes place through flashbacks, mainly Ed Miller's. Ed is suffering from vertigo, and Dr. Julia Lomas, a psychologist and psychiatrist, is here to help him. She does this by asking questions, hypnotising Ed and dragging out childhood memories that have been repressed or changed for story purposes.

Now, I'm no psychologist or psychiatrist, but I know it's not that simple. Some memories are not there, or what you remember - right or wrong - is what you remember. Granted, I do like the way this shows the memories. Ed, while being hypnotised, appears in his memory that takes on a cloudy, almost mystical appearance. It's well designed; I'll give it that.

Sometimes it's pretty interesting to see how Ed changed these memories to protect himself. Narratively, some aspects are very hard-hitting. There can be some significant development for some characters, even smaller ones, as their stories intertwine. It's also exceedingly well done how you interact with these older memories in the hypnotism sections. Granted, it leads to one of the flaws with the game. It gives you, as Dr. Lomas, multiple choices as to if Ed is lying, or if he's being manipulated by somebody else, and more. Only these decisions don't seem to have any actual impact.

Essentially, I felt as though I was along for the ride. That's not a problem; I like films too. It just felt as though so many parts pad the game length by giving you something pointless to do. I didn't need to do multiple waggles of my joystick to take a toy out of a baby's hand. I didn't need to do some stupid secret handshake - which I failed twice, but the game HAD to give me more chances to progress the story. I certainly didn't need to wiggle my sticks, or press buttons, for multiple suicide attempts, murder, assault, and more, especially when they're the only choice.

I get quick-time events, to an extent. These aren't even that; the game will stop and do nothing until you press the relevant button while a shotgun is in your mouth. Other similar things include the game not progressing until you've been to the right action points, letting you drug somebody to have your way with them. Some aspects would have had far more impact as a cutscene rather than forcing you to press a button for them. Others feel cheap. Essentially, they felt like the hostel version of pressing F to pay respects.

It damages both the game and the story, having some pretty terrible design choices like that. Still, the story was above par for video game standards. The conclusions found within are undoubtedly apt, and most characters can come across as multifaceted, flawed, and, amongst all, human. It's something most games still fail to do, and these are ones with a much bigger budget and with enough writers to storm the bastille. I will say that it isn't perfect, but to go into too much could spoil the story, and the story is all Alfred Hitchcock - Vertigo has.

That last line leads me to some issues. While I'll praise the story and its delivery on paper, I have problems with the delivery elsewhere. The voice acting is mostly good, though there are issues. There are times that the characters' lips don't move. Some audio tracks will clip with each other; other times, inconsistent volumes between voices and other effects, or background music, will cause issues. Finally, some poor directing of the VA's by delivering lines in specific ways can break a scene.

Aesthetically, it's even more of a mixed bag. I've already mentioned characters' lips, which would be an issue even in the native Spanish version since an audio track would still play over zero lip movement. Other issues are the strange ways in which faces will move. I've called many an anti-vaxer a swivel-eyed loon before, but if their eyes, cheekbones and jaws did what happens in this game, I'd be calling an exorcist after running away in fear. It's distractingly bad.

It's not attractive, looking at characters. I can accept it primarily due to the art style and how unreal the game looks. I don't think that's an issue; some elements are genuinely attractive. It's pretty in its simplicity when it comes to environments. Other parts are colourful enough to distract, enough so that it doesn't bother me that characters don't have reflections in mirrors, though I have just mentioned it.

Granted, this raises a few final issues. Sometimes you've got clothes clipping into characters' skin, backgrounds shining through faces, or teeth cutting through lips. These are core scenes too. The other issue is the UI, which is buggy on ultrawide resolutions. I've had prompts and instructions appear partly off of the screen. Finally, and possibly the most baffling, Alfred Hitchcock - Vertigo has performance issues, with it stuttering at some points, something I cannot grasp as this should in no way tax a machine that plays other modern titles on top settings.

Do I like Alfred Hitchcock - Vertigo? If I were speaking in emoticons, I would use ones that showed me thinking, then one grimacing, before another showing me shrugging. That is to say that thinking about it, enough that I'm cringing a bit, it's alright. It's passable. It's worth a shrug and an "it's okay".

As much as I genuinely like the story and characters, despite the incredibly flat description of psychopathy after it did reasonably well earlier, there are a few too many issues for me to not mark it down. From performance and graphical issues to the general design of the characters' faces which are distracting at best, the negatives start to take their toll. I didn't have a bad time, not in the slightest, but it could have been much better. 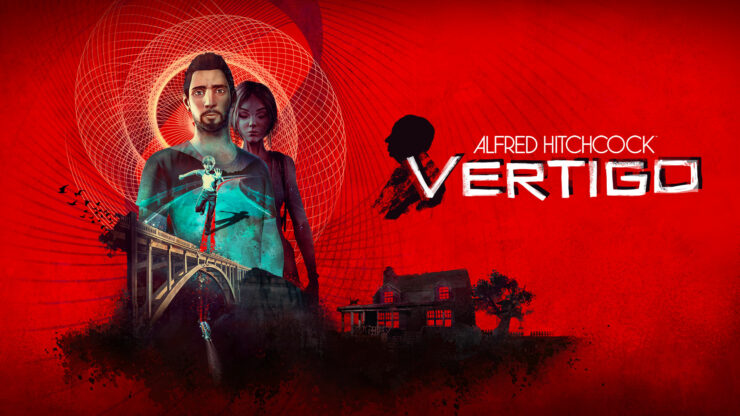 Alfred Hitchcock - Vertigo is an interesting narrative-driven adventure game, or more like an interactive story, which incorporates several themes from Hitchcock's work. While not linked to the film of the same name, Vertigo is similar in many ways and - like Vertigo - features a compelling and well-told story with (mostly) interesting and well-developed characters. However, this story is countered by distracting facial animation, issues with balancing the generally good audio, and other technical problems. Alfred Hitchcock - Vertigo isn't a bad interactive story, I'd even recommend the story, it misses the mark on too much for me to not offer some caution.

Asterix & Obelix XXXL: The Ram From Hibernia Due This Fall on PC and Consoles