Alan Wake: A Journey from Light to Darkness

Alan Wake was first announced in 2005 as a project for the XBOX 360 and the PC but in 2009 Remedy announced that the PC version of the game would be decision for Microsoft and sadly when the game released in 2010 it was an XBOX Exclusive and this made many fans looking forward to the PC version very disappointed but after 2 years of patiently waiting it seems that Alan Wake has found his way into the light of PC gaming and has shown that this is where he originally belongs. 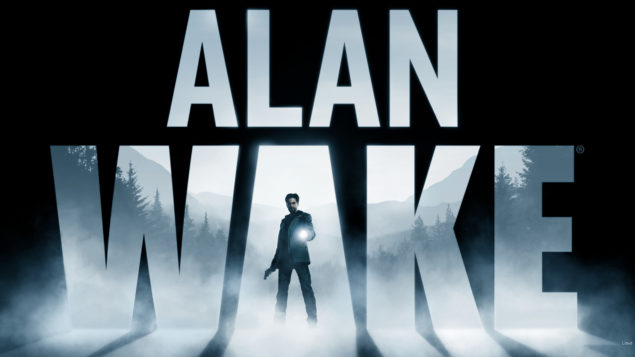 The story of Alan Wake is pretty hard to follow and the slightest detail can spoil the game for people who haven’t played it and the story of the game is one of the more intriguing factors of the game so without spoiling too much I can tell you this much; Alan Wake is a famous writer who comes to Bright Falls with his wife Alice for a nice vacation but when Alice goes missing and Alan is the only one who is able to save her he is forced to fight the forces to darkness and defeat a long buried evil to be able to save his love.

The story is told very well and includes moments where (like Max Payne) Alan narrates what’s happening around him and even narrates points of interest for us. This helps make the game feel real and immersive and shows us that Alan is more than just CGI, pixels and a voice actor, Remedy has always made a protagonist with a lively character and Alan Wake is no exception.

The game plays out in “Episodes” much like a TV Show you see now a days, The beginning and ending of each Episode is always something that really grabs your attention and just when you think to yourself “Okay only 10 more minutes and I am going to bed” and once you reach the end of that episode you WILL want to continue, the episodes even take the time to give you a recap of the story till now so that if you have a hard time remembering or understanding the story till a certain point you won’t have to be confused the beginning of the episode even goes as far as to say “Previously on Alan Wake” at the very start of it which is a really nice touch.

You will meet a cast of characters who are both friend and foe while on your adventure but what makes these characters really interesting is how they (also like Alan) have a unique personality about them and make themselves feel more real than animations, I don’t want to give away much so just play the game and find out for yourself.

During the day the game lets you explore and uncover details about the town, its people, the culture and the local happenings during the day time but Alan’s main objective will always be to find information that will help find Alice, but all that changes when the sun goes down and darkness is all around this is when the game is most interesting and when the real action and story come into play. But along with these there are also momentary flash backs which help explain Alan’s relationship with Alice and we get a better understanding about the both of them, this is again a nice touch from Remedy to help us feel sorry for Alan and makes us even more determined to find Alice.

While the ending is a bit complicated to understand I HIGHLY recommend you play through the 2 FREE DLC episodes in the PC versions called “The Signal” and “The Writer” because if the end of Alan Wake left you scratching your head then the 2 episodes will help make things more clearer to you.

The game is like Silent Hill but with a twist, normally the flash light is used to illuminate our path for us but in Alan Wake it is a VITAL weapon for fighting the darkness, this isn’t Resident Evil or Silent Hill where you can aim a flash light and a weapon at an enemy and just fire away; not unless you are looking to waste ammo. The Flashlight serves a much needed function of clearing the darkness (armor) off possessed enemies before they are able to shot down by standard weapons, while their armor is on they are near invulnerable and you are only wasting precious ammo which can be put to better use

The flashlight + weapon mechanic of the game is what makes it unique and why I really love Alan Wake, you may think that aiming a light is simple but when combat situations get more complicated and you are in a fight against 5 or even more foes at once then let’s see how you can keep your cool. While at times you wish the game didn’t have this mechanic you will feel a sense of accomplishment when you finally beat the game.

The game is pretty linear and you can almost never get lost due to the fact that the path is very well laid out for you and also you have a map on your HUD to lead you to your next objective. While there is room for exploration it will always be to help you find a collectible, a hidden stash of flares (or other weapons) or an ammo cache. You will often run into intractable objects such as radios and TV’s which give the game a more immersive appeal as you will see and hear events about the town being discussed and sometimes even elements related to the story unfold, but other than that exploration is pretty limited as area’s are sealed off and inaccessible, but considering the genre I would say that this is easily very forgivable, 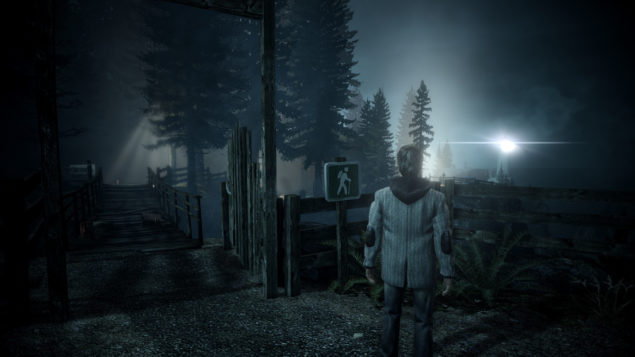 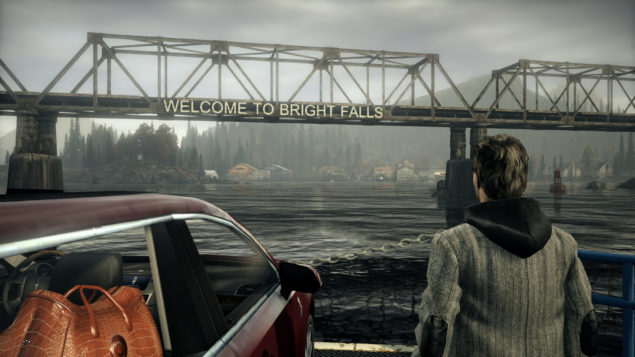 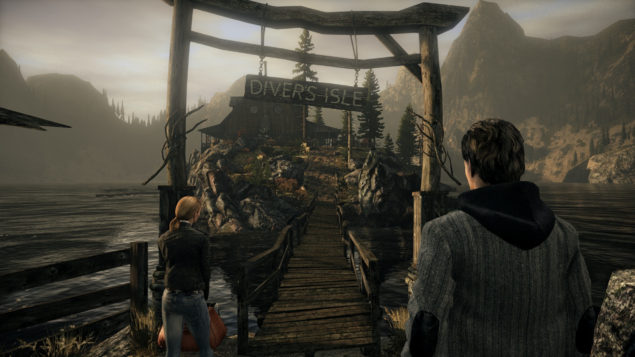 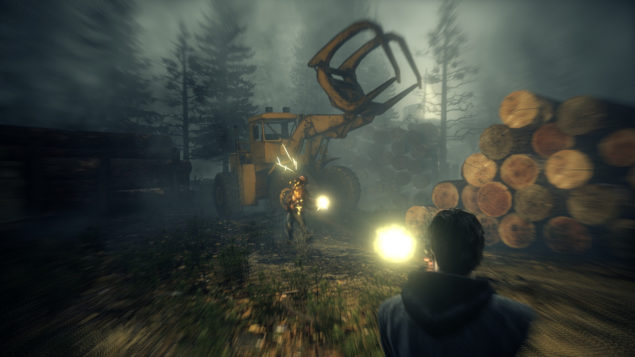 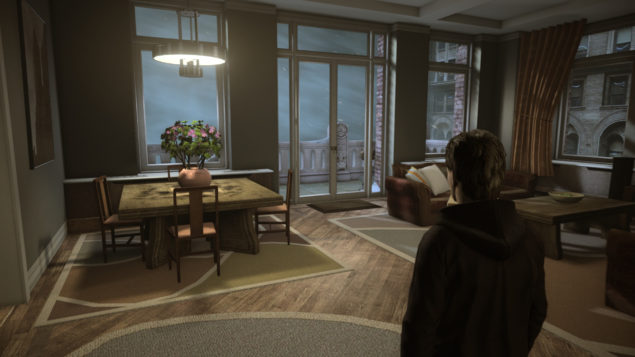 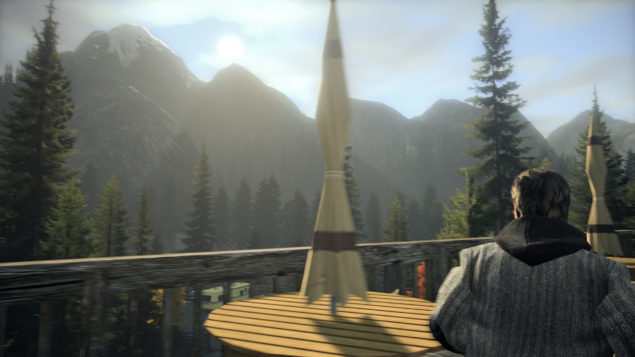 You can check out more images in the following link.

Sound, graphics and other features:

The sounds of Alan Wake are supremely well done, the wind will give a menacing hiss, trees will rattle in the distance as they fall and the sounds of destruction happening all around you are simply amazing. Most of the scary moments in the game are thanks to the sound, one minute you are running to the next source of light and SUDDENLY you hear these eerie whispers and you KNOW that trouble is nearby and you just stop and frantically search for enemies with your flashlight if you are playing this on a home theater setup then I highly recommend you keep the volume as low as possible because at times it can make even the strongest person scared for even a second. The general atmosphere of the world around you is supposed to make you feel dread and paranoia and through the brilliant sound engine of the game this is delivered in a way which will truly make most players cringe.

The PC version is a SIGNIFICANT step up from the XBOX 360 version, Remedy had the PC version ready for a while now but Microsoft always turned them down when the question of PC version came up but unlike most console to PC ports this game is anything BUT a port. The game is SUPREMELY optimized for all kinds of setups and it comes bearing 3D, improved visuals all around, support SSAO, adjustable resolutions and the whole assortment of adjustable graphics such as AA and AF for the player to adjust. And when the graphics are turned up to the fullest this game is unbelievably beautiful and there are certain moments in the game where it doesn’t even look anything close to its XBOX 360 counter-part.

As an added bonus the game launched at HALF the price of standard retail games now a days and it launched with even more bonuses than any of those even offer at their prices; Alan Wake is ONLY for $29.99 on steam and with the game you get (Taken from Steam Store Page)

All in all I would HIGHLY recommend Alan Wake, if you are a fan of third person adventure games with a mix of horror than this game is a MUST PLAY AND A MUST BUY for you, considering that the price of it is simply irresistible compared to other titles this game iis well worth every penny and with all the bonus content you are EASILY in for the best 8+ hours of your life.

The game is finally where it belongs and for any fan of the genre to miss out on this marvelous game would be unacceptable. I jumped into this game as a skeptic but once I ended it I saw that the game is anything but dull or boring and you are always alert and ready for anything.

The game met great success on the PC, the game was able to pay for development and marketing costs within 48 hours of its release from digital sales alone to where it was #1 on the Steam Sales chart, This is a sign that PC gaming is still thriving and Alan Wake will forever be a shinning example to this.

Also I want to add something which I thought many people may have missed throughout the playthroughs, the developers hid QR-Codes throughout the game and I was only able to find 2 of them, if you have a smartphone and a QR-Code scanner at hand right now I would HIGHLY recommend you scan the code in the images below 😀 Don't worry there aren't any spoilers in any of them. For the 2nd image I recommend you move your phone closer to the screen and preferably open the second image in full size in a new tab, This just shows the dedication and how much Remedy wanted a PC version for a long time. 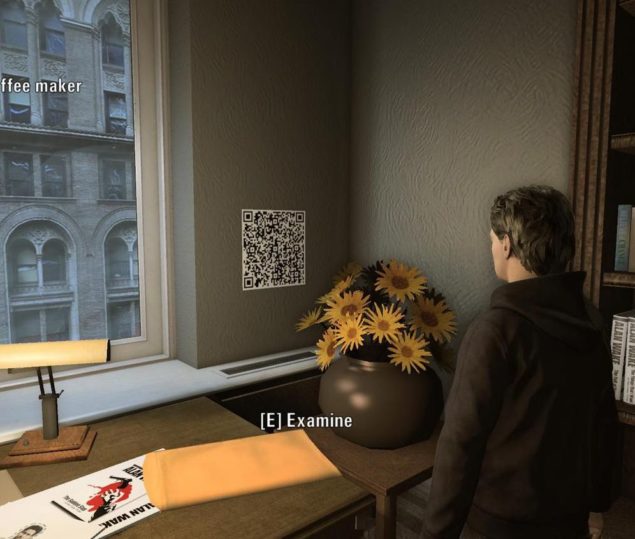