When it comes to utterly insane and often non-sensical plots to video games, Kotaro Uchikoshi’s usually on the tip of my tongue. His unique style of storytelling, filled with foreshadowing the most obscure of plot twists, makes him one of my absolute favorite directors of the visual novel medium. From The Nonary Games to Punch Line, each of his games have had a lingering effect on me that I can’t stop thinking about. When Spike Chunsoft approached me about covering his latest adventure, I knew that I simply couldn’t turn down a chance for an early look at Uchikoshi’s latest murder mystery. These are my thoughts on AI: The Somnium Files, a game that I’ve spent the past week dreaming about.

Told through the perspective of Kaname Date, a police officer with the unique task of Psyncing and delving into the minds of those linked up to a similarly-named Psync machine, Uchikoshi’s latest tale is about solving a rash of serial killings that somehow leave the victims with their left eyes gouged out. Date similarly is missing his own left eye, instead replaced with an AI-controlled robot that commonly goes by Aiba (a play on the Japanese word for partner, aibo). Often, the only clues are left behind in the dreamscapes of those related to the investigation. In a similar fashion to the likes of The Nonary Games or other Uchikoshi-helmed mystery adventures, the real gameplay takes part in these dream sequences.

AI: The Somnium Files’ dream sequences will have you Psyncin’ in the brain to solve smaller pieces of the puzzle that runs through the story. These puzzle sequences are not too far off from the escape room challenges set forth in The Nonary Games and are a bit more straightforward in execution, though certainly not in how abstract the solutions can become. While the player controls Date in the real world investigations, it’s up to the AI partner living inside his prosthetic eye to solve these dream puzzles. The very first puzzle that Aiba comes across in The Somnium Files involves a gun and a locked door; rather than shooting the lock like any other fictional cop might, the gun can instead be used as a key to open the door of the imagination.

Just because you can visualize how a puzzle will end in your mind’s eye doesn’t mean it can be as easy to execute. Each dreamscape sequence lasts but six minutes long; any longer and the Psync can have irrevocable effects on the player’s mind (which of course means Game Over). Every action consumes time, whether it’s moving around the Somnium levels, investigating clues, or putting two puzzle pieces together to reveal the next clue. While moving around takes fractions of a second to move each step, every main action that Aiba undertakes consumes a set amount of time from the 360-second limit. Certain tasks can reward Aiba with a consumable item known as a ‘Timie’ that modifies/reduces the time another action will take (and some poor choices can lead to a negative Timie that doubles the time cost of your next action). Because of how limited the time is for Aiba to conduct her investigation, sometimes it can be helpful to take a quick five or ten-second action if it rewards you with a Timie that cuts the time of your next investigation down to ¼ of the normal cost.

These Somnium dreamscapes are hands-down the best aspect of AI: The Somnium Files’ gameplay. With Uchikoshi no longer confined to making single rooms to escape from, the psyche of the unconscious mind becomes an interesting playground to investigate. Each key character that you investigate throughout the story has a radically different Somnium to explore, each with their own symbolism and esoteric ideas. It’s often claimed in the story that objects within the Somnium are based upon the characters’ past, as the mind can’t simply create new memories on a whim…

Also throughout the Somnium events are branching paths depending on how players’ solve the given mental lock. This is how AI: The Somnium Files branches out its story paths and takes players on radically different paths throughout the story. Because of how the story branches, events that happen through one storyline might play out differently, or not at all, depending on how the story progresses. Much like The Nonary Games, players can jump around to any point of the story that they’ve previously seen, with each day of investigation marking a new chapter to jump into. The Somnium Files goes even more granular and allows players to jump into any area in a particular chapter, rather than having to start the day fresh.

Kaname Date’s artificial eye can also help with investigations outside of the Somnium dreamscapes. Among its features are an x-ray mode (that can’t see through clothing, no matter how much the player tries), a zooming lens, and a thermograph that detects residual heat left behind as well as the rise in body temperature when their conversational partner is lying. Aiba has a few neat tricks available that the likes of Phoenix Wright wishes he could use in his investigations and gives these detective sequences some unique aspects.

When Date isn’t solving the next murder conducted by the New Cyclops Killer, sometimes he enjoys a bit of casual banter with those around him. Aiba is usually the player’s first choice for conversation and the two of them have a great buddy cop dynamic that shines in the localization of AI: The Somnium Files. Other characters that Date meets during his investigations, especially the likes of A-set, an internet idol, and Ota, one of her biggest fans, provide some truly amusing banter and it’s clear that AI: The Somnium Files is one of the best localization works that Spike Chunsoft has produced since 428: Shibuya Scramble. Whether you plan on playing AI: The Somnium Files with the original Japanese dub or English, both languages provide an equally enjoyable experience.

Uchikoshi’s egregious style of storytelling is not without its own pretentiousness, as one may have learned from playing Punch Line or his other more famous localized works. In order to truly immerse yourself in the story his team is weaving, a suspension of disbelief is oftentimes a necessity. After all, two college-age kids having a chat about parallel worlds and The Mandela Effect can be a perfectly normal and natural conversation to listen in on in Kaname Date’s world.

While the story and characters of AI: The Somnium Files are both great, the presentation itself lacks the same polish when it comes to the 3D models. There are some interesting action sequences that are instead acted out offscreen while the camera pans elsewhere and many of the sight gags lack any real visual cues. Thankfully, the writing more than makes up for this, so often times it’s best to consider The Somnium Files to be more like a visual novel with some extra animations thrown in. 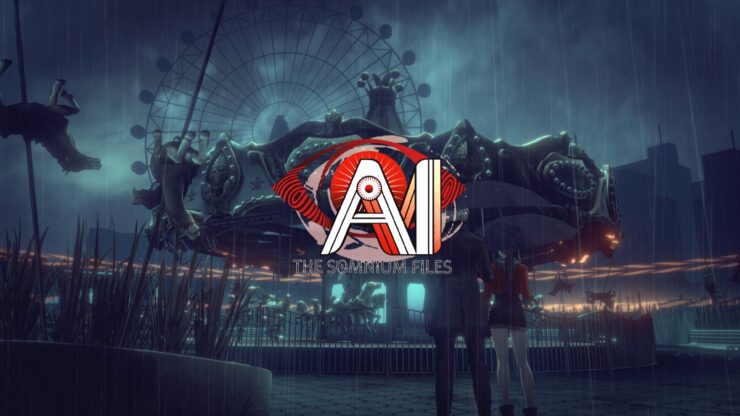 Once again, Uchikoshi has come out of nowhere with an utterly crazy murder-mystery that explores the link between witnessing horrific trauma and how it affects how victims dream.