Age of Wonders: Planetfall is setting its sights pretty high. The Age of Wonders series has always been solid, but it’s never achieved the popularity of 4X strategy rivals like Civilization or Alpha Centauri, some of which I think can be chalked up to the series’ rather generic fantasy setting. Well, with Planetfall developer Triumph Studios is replacing the old Tolkien tropes with a wholly-original sci-fi universe populated by undead cyborgs, dinosaur-riding warrior women, and other fanciful factions. They’ve also added a ton of new depth to the series’ established empire management and combat mechanics.

So, have Triumph Studios’ lofty ambitions paid off? Is Age of Wonders: Planetfall your next turn-based strategy obsession or should it be shunted out the nearest airlock? Time to take it for a test flight…

Age of Wonders: Planetfall takes place in the far-flung future following the devastating dissolution of the Star Union, which was essentially a less-friendly version of Star Trek’s Federation. With nobody in charge anymore, various factions now vie for control, including the Vanguard (galactic explorers that awoke from hyperspace to find the empire in ruins), Kir’ko (bug-like aliens once enslaved by the Union), Amazons (the aforementioned dino-riding ladies), Assembly (the undead cyborgs), Syndicate (shady space gangster types), and Dvar (planet-destroying space dwarves). It’s clear the folks at Triumph had a lot of fun dreaming up this wild and woolly universe, which is further brought to life with lush, colorful visuals. Don’t worry though, the graphics aren’t too over the top – the game still runs well-enough on medium to low-powered machines, and the map, battlefield, and UI is clean and readable.

As with any 4X (eXplore, eXpand, eXploit, and eXterminate) strategy game, you can start up a custom game whenever you want, but Age of Wonders: Planetfall also offers a full story-driven campaign. Playing through said campaign will let you get a feel for most of the factions while pursuing unique objectives, and provides some detail about the Star Union and its ultimate demise. Most hardcore strategy fans will spend most of their time setting up their own games, but the campaign is nice little bonus, as it’s something a lot of other turn-based strategy games don’t offer.

Age of Wonders: Planetfall is split between typical 4X empire management and tactical turn-based combat. The former will initially feel very familiar to those who have played Civilization and similar games. Found a Colony, produce various resources (Energy, Production, Cosmite, Influence, Knowledge, Influence and more), which you then use to fund research and construct buildings that boost your resource production further. Typical stuff. Unlike Civ, Planetfall doesn’t feature any Worker units and you don’t focus on improving individual hexes. Instead, the worlds in Planetfall are divided up into multiple sectors and once you have enough citizens in your Colony, you can strike out and claim neighboring sectors as Provinces. Each of these Provinces is basically a mini colony, with each one having a specific focus (Food, Production, Knowledge, or Energy) and its own upgrades and buildings.

Imagine a version of Civilization where you focus on managing potentially dozens of cities and sub-cities, rather than claiming a patch of land and exploiting it hex-by-hex. That’s what Age of Wonders: Planetfall is. This game is all about expansion – you have to found as many Colonies and snap up as many Provinces as you can if you want to win. Those who like to play it safe and focus inward when playing 4X games may be put off, but Planetfall’s sector-based approach does make for some interesting strategy. Wars aren’t just about laying siege to your opponent’s relatively small handful of cities – taking over individual provinces is often key to victory.

In addition to the new sector system, Age of Wonders: Planetfall does some interesting stuff with diplomacy. It’s limited somewhat by the fact that you can’t trade resources with other factions, but the game does a nice job of tracking exactly where you stand with your opponents and their relationships with each other. It can get quite complicated if you’re playing with a good number of rivals -- it starts to feel like trying to navigate some overheated alien high school lunch room. That said, overall, other leaders tend to behave less randomly than in Civilization. In addition to the main factions, there are also NPC races, which are actually quite important in Planetfall. NPC factions provide you with a steady stream of side missions, are the only groups you can trade with, and wooing them is key to winning a “Unity” diplomatic victory. You rivals aren’t terribly aggressive, at least in terms of declaring war, although they do doggedly pursue victory conditions. This isn’t one of those 4X games where the AI isn’t playing to win.

As well-executed as Colony management and diplomacy are, there are some expected 4X features missing from Age of Wonders. There’s no real economy or trading, nor is there any system of religion. You can set various Doctrines that give you an array of empire-side boosts, but there’s no real way to set your style of government. Ultimately, this is a somewhat stripped-down approach to 4X, primarily focused on expansion and combat.

Unlike other games in the genre, combat is more than just stacking up units and bumping them into each other. Age of Wonders has always featured full tactical battles and Planetfall takes it a step further with detailed XCOM-like maps, rather than the more simplistic arenas of the past. Each map has plenty of objects to take cover behind and it’s crucial to keep track of all the sightlines. In addition to the revamped maps, each faction has its own combat strengths, with, for instance, the Amazons focusing on ranged and biochemical attacks and the Syndicate bringing electrical and psionic weapons to the fight. At the beginning of the game, you also choose a secret technology, which can unlock additional abilities, mods, units, and, eventually, a powerful doomsday weapon. You can mix and match factions and secret techs to create unique combat possibilities – combine the Amazons with the Psynumbra secret tech to summon other-dimensional monsters alongside your dinos. Combine the Assembly with the Celestian tech to create a friendly, peace-loving horde of cyborg zombies.

It may sound like there’s a lot of depth to Planetfall’s combat, and compared to something like Civilization, there is, but I’d argue it doesn’t go quite far enough. Yes, you can bring a ton of different unit types and abilities to the battle, but in the end, they still start to feel rather same-ey. You can only have six units per stack (although more than two stacks can participate in a battle), maps repeat, and your objective is always just “kill all the enemy units.” Planetfall’s battles may look like they’re ripped from XCOM, but they’re not nearly as varied. I found myself gradually automating more and more battles – at first, I was only skipping battles against easy alien scrubs, but then I started skipping pretty much any battle where I overpowered the enemy. Eventually, I was even skipping competitive fights.

Let me assure you, I felt bad doing this, as so much of Planetfall’s depth is tied up in combat. Over half the technologies you research primarily benefit combat and the game lets you upgrade and mod every unit in your army, allowing you to create your own unique Frankenstein-like monsters. I tried to manually play as many battles as I could stand so I could appreciate all the work I had put into my units, but at times it felt like an obligation rather than fun. Planetfall’s combat isn’t bad by any means, it just isn’t engaging enough to justify all the time and attention the game wants you to devote to it. There’s no sidestepping it either, as most of the game’s victory conditions demand a lot of time on the battlefield – this is a game where the scientific “Development” victory involves destroying your enemies with a doomsday device. There is the Unity victory, but even that one requires lots of expansion and alien-killing to succeed. Maybe there’s a reason Civilization has stuck to units bumping into each other for so long. 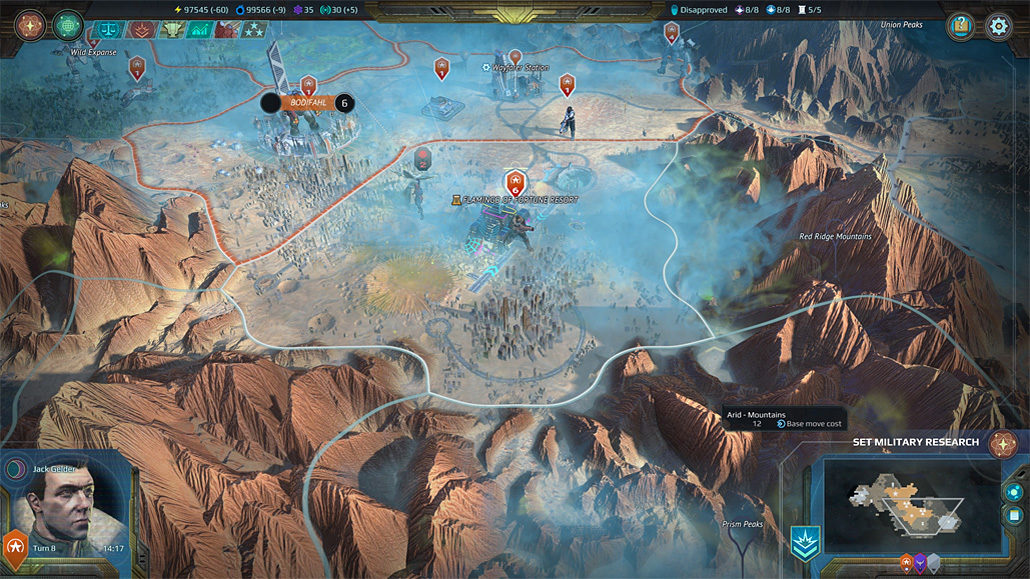 Age of Wonders: Planetfall’s story will take most players 15 hours (at least) to complete, and there’s a fair amount of built-in replayability as planets are semi-randomized and you can take different paths through the campaign missions. Of course, you can also play a potentially infinite number of custom games. Ultimately, whether Planetfall becomes a long-term obsession or forgotten after a few entertaining weeks will depend on how well you connect with the game’s combat and mechanics. I could see some strategy fans getting hooked, but your interstellar mileage may vary.

This review was based on a PC copy of Age of Wonders: Planetfall provided by publisher Paradox Interactive. You can get a PC copy of the game via Green Man Gaming at a slight discount. 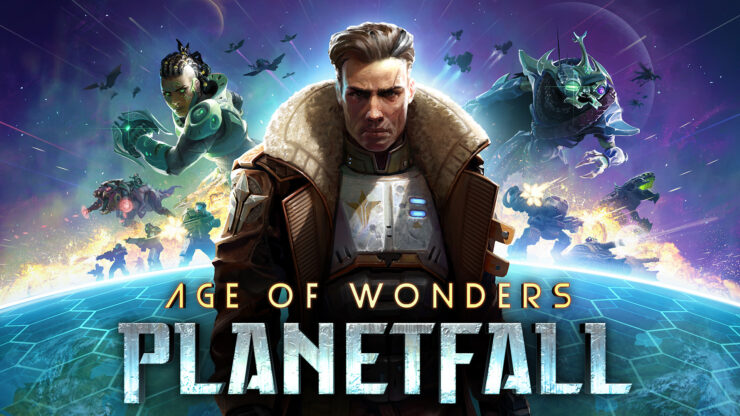 Age of Wonders: Planetfall is an imaginative sci-fi strategy game that adds some interesting new layers to the series’ empire management and combat mechanics, but, ultimately, the game falls just short of greatness. Combat needs to be a touch deeper and standard 4X ingredients like trading, religion, and government policies are missed. Planetfall is certainly worth exploring, but not all strategy fans are going to want to set up permanent residence.