Aegis Defenders tries to package platforming, tower defense and cute little story into one bundle of beautiful pixel art. And it does so surprisingly well. While not perfect, Aegis Defenders offers a refreshing amount of variety in such an unassuming parcel.

The game, like so many others nowadays, features humanity crawling out of some long forgotten apocalyptic event. Small nations have formed around entities known as the Deathless. These creatures, AIs from the fallen civilizations that came before, are worshipped as undying Gods and are seemingly benign.

In a fairly surprising turn of events, the humans wishing to free themselves of the Deathless rule are played as the antagonists, ruthless in their quest to destroy the Gods and those that believe in them. Video games have always struggled with religion and often retired meaningful discussion for open cynicism, so to see some earnest, unbrainwashed and kind believers was quite pleasant. The story follows these small tropes as they, for various reasons, oppose to the expansion of the evil atheist empire.

Levels are broken up by evening at the caravan. Much like in Pyre, you can use these moments to get to know the cast a little better, as well as upgrade and purchase new equipment. The narrative all comes from dialogue and short cutscenes that expand on the history of the world. There is a little bit of environmental storytelling found here and there, but mostly the levels are designed for utility.

The beginning of nearly every level is a chance to explore the terrain and solve some puzzles. There are a few collectibles to find across the map for those willing to look, but the gorgeous artwork was all I really needed to explore the landscape. Puzzles are scattered across the landscape and become increasingly complex as the game progress. They’re all solvable, but some moments had me wandering aimlessly for a while before finding a solution.

With four characters by the end, each with their own unique interaction with the world, puzzles quickly become tests of their abilities and your understanding of the mechanics. They can never be completely ignored and brute force solving is never an option. Some solutions are annoyingly precise and discovering exactly what the game expects of you can be a bit tiresome.

These character abilities really come into their own at the end of each stage, where you’ll have to defend a central position from waves of enemies. While the game is mapped in 2D, it quickly begins to explore the vertical space making sure there are more avenues to defend than you can manage at first. While this is the climax of each level, it was also the weakest part of the game in my experience. Trying to control four separate characters at once, across half a dozen routes, was too much. Swapping characters and building defenses are both quite fiddly and adding the tension that comes with tower defense meant that a lot of the time I just lost control of the situation.

While it's easy enough to navigate in the platforming sections, with characters either invisibly following one another or separately tackling puzzles, positioning them all is just a little too clumsy to always be fun. I also found that these defensive sections of Aegis occasionally spiked in difficulty. Essentially, each enemy has a weakness telegraphed by its color, with each character having a similarly color-coded response. The semi-random nature of the attacks means that your strategy has to change each time but can often lead to an assortment of tricky enemies flooding on the corridor of defenses. During the siege of the first two levels, I didn’t take any damage, but it took me multiple attempts at the third because of frequent attacks by red enemies of which I had no defense yet.

These moments make putting Aegis Defenders down quite easy, as it feels like a challenge you can’t overcome with any more skill. Playing it for the Switch made it very easy to pick up again, though, and I found myself coming back to the finale of levels several times for one more attempt whenever I had a free minute.

It’s a stunning game for fans of pixel art, and the character art during conversations also stand out. Trying to blend so many genres together is never going to fit together perfectly, but having such unfriendly controls might have been one issue worth addressing before launch. I kept coming back to Aegis Defenders, but the defenses began to feel like a chore at the end of the level rather than the exciting conclusion I imagine they were hoping for.

Reviewed on Nintendo Switch (code provided by the publisher). You can purchase the game for PC on Fanatical. 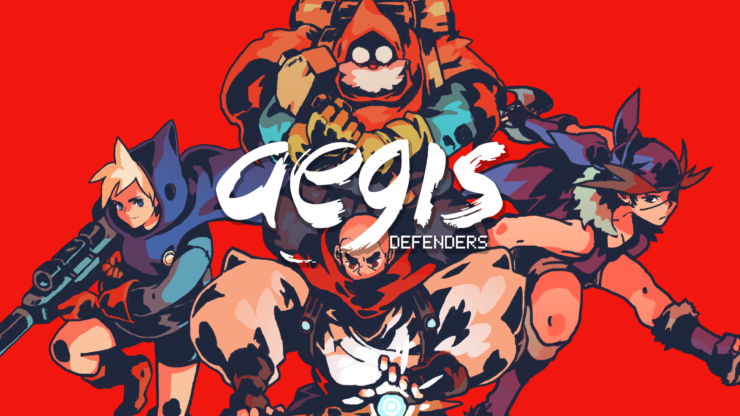 With great art and an interesting idea at its core, Aegis Defenders still would have needed quite a bit more refinement to really stand out.