ARCTIC or formally known as Arctic Cooling is a well known company in terms of miscellaneous cooling products for computer hardware and more for over 10 years. ARCTIC’s expertise ranges from noise suppression for PCs, audio, peripheral equipment and power supplies, right through to entertainment products. ARCTIC itself is an umbrella brand for  sound, equipment, hobby and living product ranges. As for today, WCCFtech received the ARCTIC Accelero Twin Turbo II VGA Cooler for review at its doorstep.

Scroll down for the in depth review as we test it on our test bench on an MSI GTX560Ti HAWK 1GB Graphics Card in terms of cooling performance whether it is able to maintain those heating GPU's as cool as possible or is just another overpriced VGA cooler.

The GPU cooler comes in a plastic some what air tight packaging that snugly holds the product and it's accessories along in one place with printed cardboard depicting the cooler's name, specifications and the details of it's contents on the backside of the plastic box. 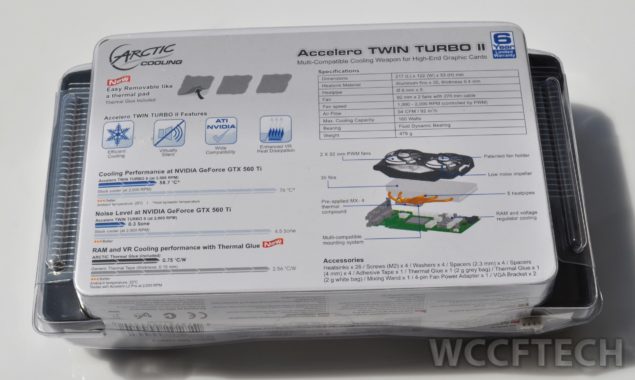 The cooler itself comes pre-applied with thermal paste on the cooler. In terms of compatibility, it can fit a large number of cards from the early ATi X1900 series and Nvidia 6600GT's to the latest AMD 6970 and Nvidia GTX 580. But mainly this card has been advertised to work with Nvidia's GTX 560Ti that we will be further on using for carrying out benchmarks with the cooler.

As you can denote from the images above, the cooler comes with small heatsinks of various sizes for both memory chips and VRM's as well as two expansion brackets. A TM spreader/remover stick has also been provided for easier applying/cleaning. There is also a VGA fan 7/12V 4-Pin adaptor to power the two fans on the cooler in case there isn't any place for them to connect onto on the graphics card. 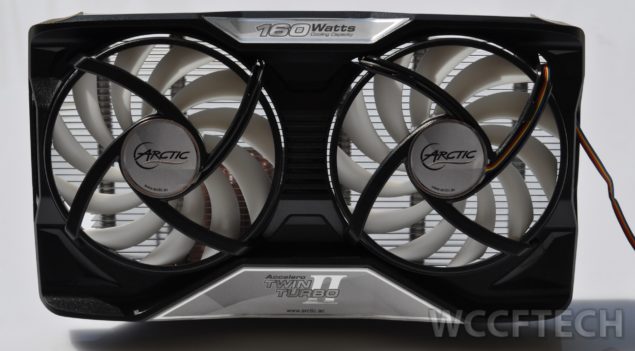 The cooler itself is made up of 36 heat sink fins that are spread over 5 heat pipes coming from the cooler's die. On top are two fans that run clockwise forcing air downwards through the cooler and are held in a molded plastic cover that spreads over the heatsink completely. Pretty much you can figure out the cooler supports cooling up to TDP's of 160W from the advertisement on the top cover. 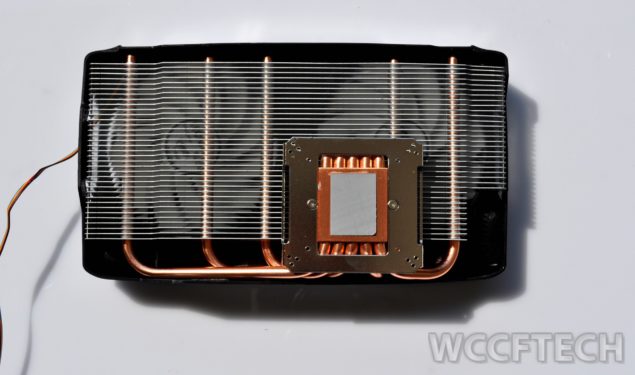 The heat sink base comes pre-applied with thermal paste for first time installations as well as various mounting holes on the mount plate can be seen that are for installation on various large number of graphics cards starting from the pre-historic ATi 1300 series to the latest AMD 6970 and in terms of Nvidia cards from the 6600 to their current main stream graphics card, the GTX 580. There is also a separate TM bundled along known as the G-1 thermal paste for multiple applications.

The cooler looks fragile in terms of looks but then again, never judge a book by it's cover. The build quality seems good and sturdy in keeping everything in place.

The 5 heat pipes are 6mm in width that protrude through the 35 aluminium heat sink fins that measure 0.4mm each in width, ensuring optimum heat dispersion throughout it's use.

The installation is dead on straight forward. Simply remove the old cooler and screw in the new one as per matching screw holes on the mounting plate. In case of a too close contact with the die, four 2.3 and 4 mm spacers have been provided along with washers that can allow you to change the pressure and manage any extra gap on the card and not harm the PCB by making it 'curve' as most after market coolers do.

All the tests that were done using a 10 minute burn-in  using MSI Kombuster for 5-10 mins in GPU Burn-In mode.

It is a worthwhile improvement over the stock heatsink variant but as it shows, custom heatsinks from manufacturers indeed are better. Referring to the Twin Frozr III, there isn't much any difference between it and the Twin Turbo II.

It's safe to say that indeed the Accelero Twin Turbo II from Arctic Cooling does live up to it's name but then there is the question of it being able to mount on other graphics cards. In case of this cooler, it is one of those coolers I have ever come across that offers such a huge compatibility over a large number of cards. Mind you that the card we had used in our testing wasn't a reference card so there was a doubt of it snapping on without a hitch. Thankfully no such issues raised throughout our testing.

The guys at Arctic Cooling do say they don't guarantee this card to fit on every non reference card. None of the less, the cooler belongs to a niche market and some would hesitate of making the purchase. But that is up to the end consumer themselves. Citing the cooling efficiency, the almost silent performance of the cooler through out it's total operation and price, one should not hesitate in making a move in getting this product for their overheating cards.

Last but not least, I would like to thank the guys back at Arctic for providing us the sample. 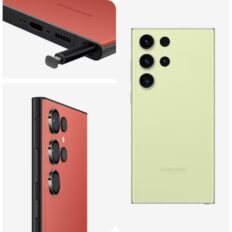 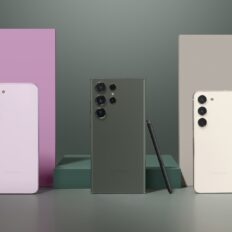 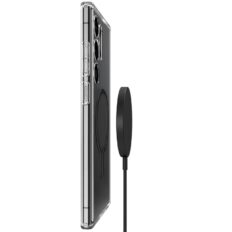 Apple’s MagSafe Comes to the Galaxy S23 Ultra… by Spigen 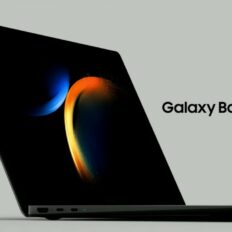