Our avid readers may remember once we had talked about an upcoming gaming netbook by Razer that will bring a new revolution in the way we do PC gaming. And to prep it’s launch, they gave us all a teaser. 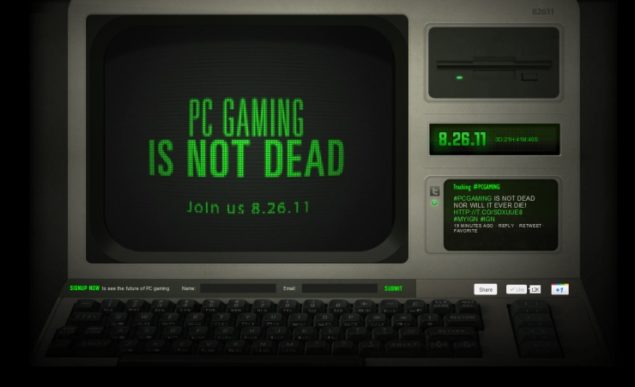 After first hearing of the concept at the CES 2011, the Switchblade was previewed by Razer that they would present a gaming-yet-portable netbook to the world that will cause the rise of a new revolution in the much enthusiast filled world of PC gaming.

According to the press releases on various social sites as well as official presses sent out by Razer, they had advertised of how much people have had been exaggerating about consoles taking over the gaming scene and rendering PC gaming as obsolete and outdated.

Further ahead, they start bashing directly at the Xbox 360, Nintendo Wii and Sony’s Playstation 3 that PC gamers are still alive and number over 300 million and going strong day by day. Also, Razer says they look forward to a world in which both Console and PC gamers would stand side by side. Gamers in arms.

Lastly, they point to the date 26th August 2011 at precisely 6pm CEST (5pm BST, 4pm GMT) of unveiling a new innovation in all terms of gaming that will break the silence of (yet again) PC gaming.

Here’s the text from the official press release:

We have all heard the rhetoric about the demise of PC Gaming—the stories that console gaming will take over all gaming and that PC gamers will be left with shoddy ports of console titles. The rumors of our untimely demise have been greatly exaggerated. We are more than 300 million PC gamers worldwide and this legion is growing every day. Today there are more PC gamers than all console gamers combined and we have been silent in the face of the closed gaming systems that have been propagated. We, the PC Gamers, have been here since the beginning and have seen the industry grow to surpass movies and music, and we look forward to an open world where console and PC gamers will stand side by side as gamers in arms. We are here today to tell you, that on the 26th of August, we will seek to end the silence and bring a new age of openness and innovation to all gaming. Together we shall remind you – that PC Gaming is NOT dead.

This is all to me shows Razer pointing fingers at finally unveiling its dual core Intel Atom powered netbook that, if you may not know, has a specialty not ever seen in any laptops/netbooks/desktops ever.

For instance, you’re doing some office work on a normal netbook, you open a game, and have to manually define dedicated keys in the game. Not anymore. As for the switchblade, the keys are all LCD backlit and change according to the game launched.

As far as I know and sure is that the Switchblade will come preconfigured for MMORG game titles such as DOTA, World of Warcraft and even possible (not sure though) of FPS titles such as the much acclaimed Call of Duty : Black and Battlefield : Bad Company 2.

I on the other hand can’t personally wait for the launch of the Switchblade for which, I am very sure of Razer’s words of bringing in a revolution in PC gaming, much like Apple does with its products every time.

Oh and one more thing, PC Gaming is NOT dead!