Slightly Mad Studios' boss, Ian Bell, talked about the benefits that DX12 would bring to the performance of Project CARS, claiming a 30-40% increase. Ian Bell mentioned it in an Xbox One thread, leading people that it was regarding a possible Xbox One boost. It appear though this is not the case, as he subsequently clarified the performance boost PC and console gamers can expect.

Ian Bell explains that 30-40% was for the PC version of Project CARS in DX12 mode., and continued that console games should be expecting a 7% (or slightly more) boost from DX12.

Slightly Mad Studios will be focusing on the hardest hit areas on circuits ands continued that the DX12 patch for Project CARS will most probably be released this year. 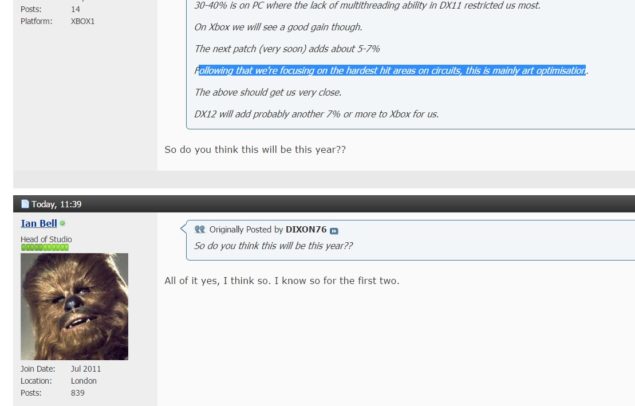 Ian Bell closes by mentioning that slower quad-core CPUs on the PC front will most likely see a 40% performance boost with DX12, which is similar to what other developers have reported in the past.

Slightly Mad assures that this is not the case and explains that the issues that are creating this notion are simply controller related.

“Not at all. It’s purely a controller issue.”

The team is actually using the new patch and Ian Bell claims that “with the patch it feels ace here,” going on to reassure disgruntled players that “it will be with you soon.”